On the 27th of November 1944, Hitler ordered the construction of 20-30 Flammpanzers. The next day, he was shown how many of these could be built on the existing chassis of tanks or tank destroyers in the following days.
On the 3rd of December, it was reported that 35 such conversions could be produced. Ten of these would be Panzer IIIs that would be converted into the Flammpanzer III, also known as the Panzer III (fl) or (flamm). The other 25 would be made up of Jagdpanzer 38(t)s. The 20 vehicles that were built were obtained directly from the factory on the 8th of December 1944. After the conversion, they were known as the Flammpanzer 38(t).
The vehicle is known by two names. These consist of the simplistic “Flammpanzer 38(t)” and the rather more official “Panzerflammwagen 38(t) mit Koebe-Gerät” 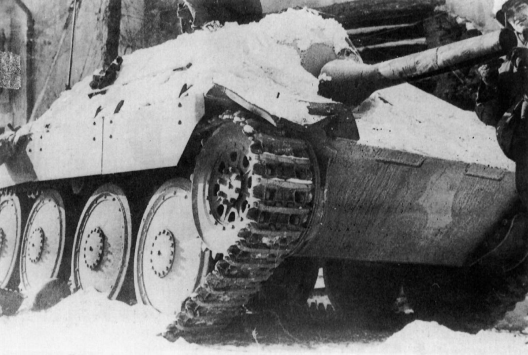 One of the Flammpanzers captured by US forces. A GI stands to the right of the vehicle. Photo: Osprey Publishing

The Jagdpanzer 38(t) was based on the chassis of the Panzer 38(t) light tank, which, in turn, was based on the Czech LT vz 38. It is controversially known as the ‘Hetzer’. The running gear and engine was unchanged (aside from strengthened road-wheels), with the Jagdpanzer’s 15.75 tonne weight supported on four road wheels attached to a leaf-spring suspension. Propulsion was provided by a 158hp Praga 6-cylinder petrol engine.
An armored casemate was added in place of the turret and main body of the tank. The chassis was also widened. For a small vehicle, the armor and armament were very effective. Frontal armor consisted of a large plate which was 60mm (2.36in) thick and sloped at 60 degrees from the vertical, which, therefore, offered around 120 mm (4.72 in) of effective protection. This was also where the main armament, the potent 7.5cm PaK 39 L/48 was mounted.

Not too many changes were necessary to turn the tank destroyer into a flamethrower. The biggest modification came with the removal of the 7.5cm gun and accompanying cradle with traverse and elevation gears, as well as the 7.5cm ammunition storage racks. 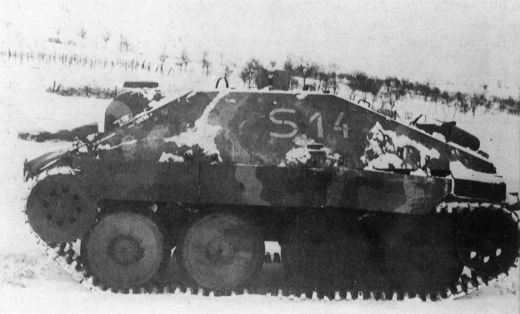 A flammpanzer that was abandoned after action. The protective barrel around the flame projector is broken. A common complaint from crews was that this sheath was far too fragile. Photo: Osprey Publishing
A “Koebe-Gerat” (Lit. ‘device designed by Koebe’) 14mm Flammenwerfer (flamethrower) was placed in the void left by the gun on a swivel mount, with limited traverse and elevation angles. The flamethrower was aimed by a periscope which was added directly above the flame gun, atop the bulbous armor of the mantlet. It was the same model as the one used on the Sd.Kfz.251/16, a flamethrower version of the famous half-track. Like the other Flammpanzers, the nozzle of the flammenwerfer was protected by a false 120mm diameter false gun barrel. Firing unlit flame oil, a maximum range of 50 meters could be reached. When firing ignited oil, which was ignited by a blank cartridge (known as ‘Zuendpatrone’), the range increased to 60 meters. Unlit fuel was often projected to saturate a target area before it was ignited by a proceeding ignited burst. A 700-liter tank carried enough fuel for 60 to 70 one-second bursts of flame at a rate of 10 liters per-second
Unlike most flamethrowing versions of existing gun tanks that usually drop the loader crew member, the 38(t) retained a 4-man crew. This consisted of the Flamethrower Operator, Radio Operator, Commander, and the Driver. The original plan for the vehicle, however, was for it to have a three-man crew, with the Commander also doubling as Radio operator.

Initially, the Flammpanzers were to be used as part Operation Northwind (Unternehmen Nordwind), the last major offensive of German forces during the Second World War, which would start on New Years Eve 1944. Earlier that December, Heeres Gruppe G had reported 2 Flamm-Panzer-Kompanien, each with 10 Flammpanzer 38(t)s ready for action. These were Panzer-Flamm-Kompanie 352 and Panzer-Flamm-Kompane 353. Kompanie 352 were ordered to the front Christmas Day, with Kompanie 353 following on the 30th. It appears that both Kompanien, however, did not take part in the operation.
The first combat report of the Flammpanzer 38(t) was not recorded until mid-February 1945. Kompanie 352 and 353, attached to Panzer-Abteilung 5, 25. Panzer-Grenadier-Division took part in combat during an attack on Hatten, a French village near the border with Germany. The action was costly to Kompanie 353, which lost seven of their Flammpanzers and all of their officers. As such, the remainder of the 353rd was absorbed into the 352nd.
In this action, the 13 remaining Flammpanzers were used to counter Allied bunkers and dug in gun positions. A number of times while assaulting positions in Hatten, the vehicles broke operating procedure and attacked without infantry or gun tank escort. This was strictly forbidden in the case of flame tanks.
Street fighting in the nearby village of Rittershoffen would be the next action for the Flammpanzers. Three vehicles were lost in this action, two to anti-tank and tank gunfire, and the other lost to a mine. An attempt at recovery was made, but it was damaged beyond repair during a further barrage of Allied fire. By March 1945, Kompanie 352 reported that they still had at least 9 Flammpanzer 38(t), 8 of which remained operational. 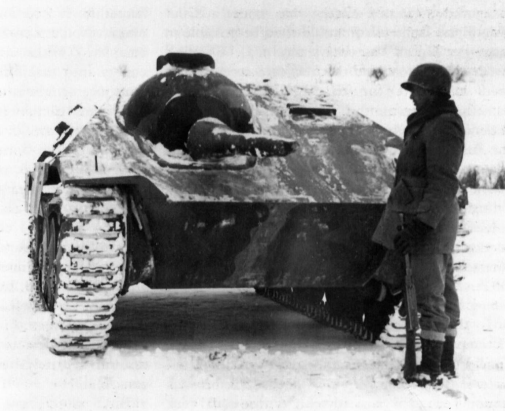 This Flammpanzer was not the only flamethrowing tank built on the chassis of the LT .vz 38/Panzer 38(t) light tank. In 1949, the Czechs designed and prototyped the PM-1. The flamethrower gun was placed in a turret that was mounted on the Jagdpanzer’s roof. A large tank for fuel was added to the rear. Only three prototypes of this tank were built, with the project ending in 1956.

Excellent work! However, you might want to check your sources regarding the statement: “….was based on the Czech LT vz 38…. The running gear and engine was unchanged….” The 1st part is definitely true, however it seems that the running gear (specifically the wheels) was strengthened when the chassis was broadened.