By the start of the 1930’s Italy’s tank fleet was seriously outdated. The Italian army (Regio Esercito) had a large number of Fiat 3000’s and a handful of light tanks and just one giant Fiat 2000, which was mostly used for training and display. The army had just embarked on a new program to build/produce light tanks which had brought them Carden-Loyd tanks from Great Britain, which had led to the CV.29.
That was a light tank though and the only tanks serviceable for combat were the machine-gun armed Fiat 3000 (it was not until later that this tank was downgraded to the status of a light tank in Italy). The Fiat 3000 was a slight improvement over the Renault FT which Italy had examined and obtained a small number of at the end of WW1. With minor modifications to the original Renault FT design, the Fiat 3000 had been formally adopted in 1921 as the ‘Carro d’assalto Fiat 3000A’ (Assault Tank Fiat 3000A) or simply the Fiat 3000 Model 1921 and became the mainstay of the Italian tank fleet. Inadequately armed to fight enemy tanks or take on enemy fortifications the Fiat 3000 needed improvements to the armament and one of the ideas to improve the firepower of the Fiat 3000 was the addition of a flamethrower.
The idea of adding a flamethrower was born in 1932 as the brainchild of Major Rodolfo Faronato and Captain Enrico Riccardi. Both were tank officers based in Bologna and proposed to fit one Fiat 3000 Mod.21 with flame-throwing equipment for evaluation.

Planned layout of the flame projector and fuel tanks in the Fiat 3000 Model 1921. Source: Pignato

Given approval for the experiment, an unidentified Fiat 3000 was modified to take the equipment, although the modifications needed were relatively minor. Three fuel tanks were planned – two long rectangular tanks were fitted within the suspension area on either side of the tank, each of which could hold 135 liters of fuel, and a smaller third tank within the actual tail skid area holding an additional 98 liters. This meant that this small vehicle was planned to carry 368 liters of fuel for the flamethrower.
The fuel tanks were connected together within the tank by means of a hose to a central point slightly behind the turret where they met at a pump. The pump then delivered the fuel to a pistol type nozzle held in the turret. By using a pump system there was no need for a large and vulnerable compressed air tank on the outside of the vehicle. 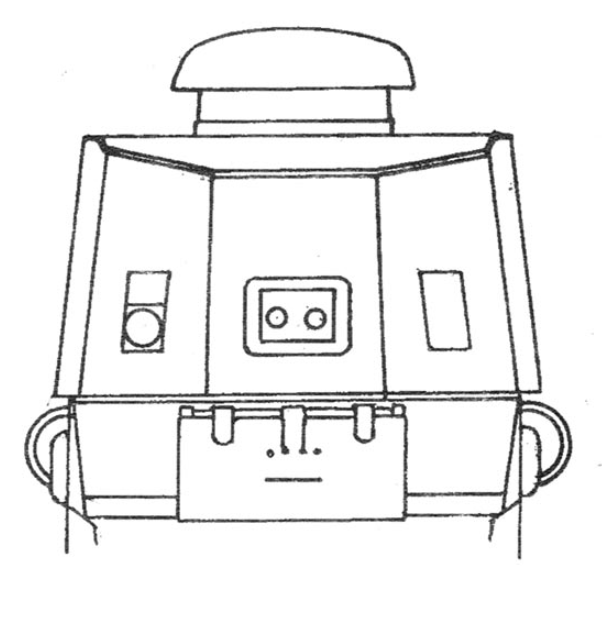 Detail of the two rectangular holes cut in the cheeks of the Fiat 3000 Model 1921 turret. Source: Pignato
The turret, which was made of nine flat panels of steel plate, had two rectangular holes cut into the cheeks, either side of the main armament. Each of these holes was presumably covered with some kind of armored flap and through either of these holes, the flame projector could be placed to spray the target with flame. 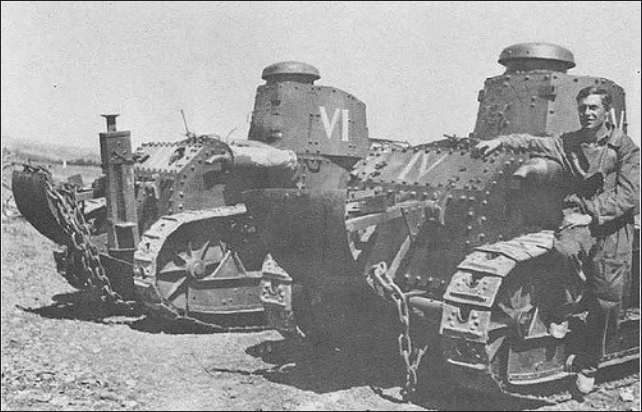 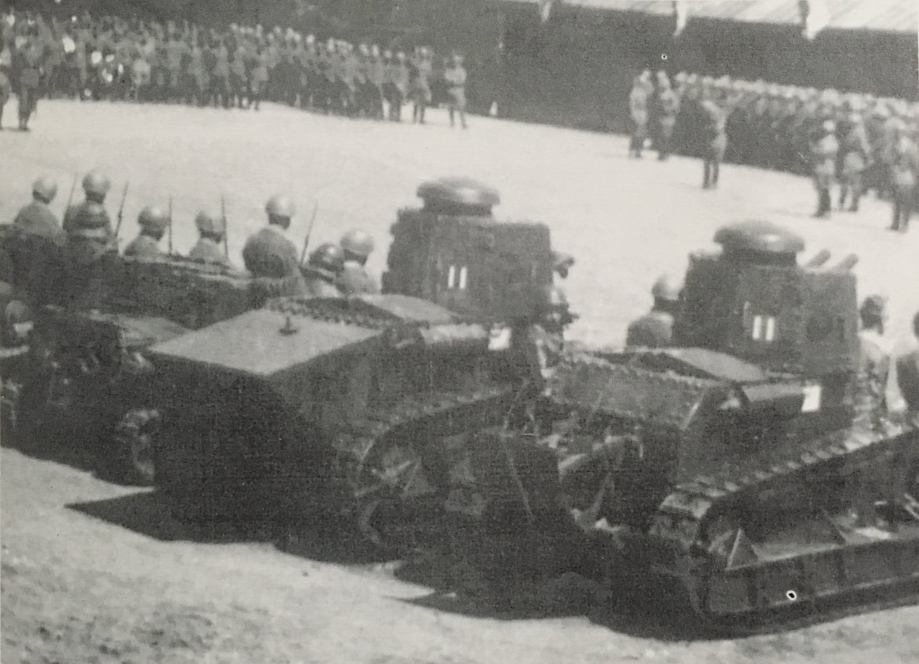 Only known image of a Fiat 3000 Model 1921 fitted with flamethrower equipment showing its large rear fuel tank. Source: Pignato (Lovati collection)
Instead, the actual vehicle (see image above) had a very large angular tank across the back of it and which is assumed to simply be the result of a modification from the original design to carry more fuel.
In addition to this, the turret front, which is out of shot does not have the twin Fiat Model 14 machine-guns raised in salute like the vehicle next to it. Although unclear, the photograph seems to instead show either a different flame-nozzle (similar to the one adopted for the CV.3 L.f.) or perhaps some kind of cover over the weapon. This suggests that the main armament may have been replaced with a dedicated and fixed flame projector similar to that later adopted to the CV.3 Lf. Research on the matter is continuing to determine whether this is a completely different flamethrower variant, a later modification to the original design, or simply that the vehicle was built that way, different to its plans. One theory for the difference is that this large rear tank simply replaced the two rectangular ones planned within the tracks as it could have been too vulnerable. Unfortunately, the photograph does not show whether this vehicle was fitted with the side fuel tanks either. 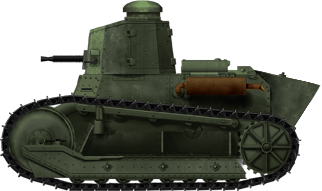 Fiat 3000 F.l. with large flamethrower fuel tank on the rear, by AmazingAce on David Bocquelet’s work

The Fiat 3000 M.21 converted with this flame projector retained its pair of 6.5mm Societa Anonima Italiana Ansaldo (SIA) machine-guns located in the turret, with fifty 40 round chargers for a total of 2000 rounds. The flame-projector details are not known, but it is likely to have been a converted army model with a range of up to 40m under optimal conditions. This would have been ideal for clearing a trench or dealing with an enemy pillbox where the machine-guns of the tank would have otherwise been mostly useless. The quantity of fuel provided would have been sufficient for several bursts. When not in use, it appears that the flame nozzle could be stowed on the inside of the turret. As this nozzle was not mounted, but held by the commander, it would have seriously hindered any attempts to command the vehicle or use the machine-guns whilst in use and also risked some backwash of heat coming into the tank. It is likely therefore that the commander would have to have been provided with standard equipment such as flame/heat-proof gloves and hood – both of which would have reduced his ability to see and operate.

The ‘Carro d’assalto Fiat Tipo 3000’ M.1921 was a small tank, just 2 crew, commander, and driver and protected by armor only 16mm thick at best. At just 5,500 kg it was light too but even powered by the 6.236 liter Fiat Model 304 4 cylinder petrol engine produced just 50hp and a power to weight ratio of just 9.1 hp/t. Whilst the flame-thrower had no extra armor, it also had no new engine but had to carry the additional load of the fuel and flame equipment. Even with just the original small tanks, this would have been about 500kg and with the large tank at the back perhaps as much as 1000kg. Not only would this additional weight have reduced the performance to below the 20km/h the Fiat 3000 could usually manage but it would also reduce the power to weight ratio to between 8.3 and 7.7 hp/t. Carrying a large weight on the back, whilst providing improved protection for the fuel tank from enemy fire would have also seriously affected the ability to cross obstacles and affected the balance of the tank.

It is possible that the answer as to why the photograph differs from the design may never be known. It could be that the vehicle in the photo is the original or just a modification, or a completely different experiment. What can be concluded, however, is that Italy made at least one modification to a Fiat 3000 for the carriage of flame equipment. Given the widespread use of such equipment from the infantry, to light tanks and even trains, it seems that the experiment must not have met with approval or else would have seen wider manufacturer.

Out of curiosity and not applying to this particular vehicle, how effective would a flamethrower be against true armour? While this vehicle was clearly designed for clearing out infantry, would a flame thrower be effective enough to damage or destroy armour such as a panzer IV, M4, T34, etc? Molotov cocktails are rather effective at it, just brings up the question. Nice article by the way, you guys are pretty darn good at this.

There are tales of the German Flammpanzer III successfully knocking out an allied tank in Italy. But flames are really just a nuisance to tanks. The flaming liquid can block viewports or clog up ventilation ports and send smoke into the crew compartment. The worst effect is when flames are on the engine deck as the flaming liquid can drip through vents on the deck or starve the engine of oxygen.
– TE Moderator

Are you sure it wouldn’t heat up inside of the tank? Would it become unbearably hot?

No to a dangerous degree.
– TE Moderator

Thanks for the information. Pleasure reading the articles. 🙂