Guido Corni was an Engineers Major from Modena (Italy) who had served in the Italian Army during World War One (Regio Esercito – RE). Towards the end of the war, he had worked alongside Captain Scognamiglio on armored car designs and their designs were considered by the High Command. The Great War had ended before their work had left the paper design stage and, with a stock of armored cars like the Ansaldo-Lancia 1ZM in stock as well as serious financial problems, the government was not going to spend more money on a new armored car.
That particular vehicle (the Corni-Scognamiglio) had been quite conventional. It was based on a wheeled truck – as were most armored cars of the era – with an armored fighting compartment built behind the driver. With the pressures of war over, Major Corni had lost none of his ingenuity, filing a patent for improvements in combustion engines in August 1920. In 1923, he filed another patent for another armored fighting vehicle. This time it was a half-track with some unusual features. 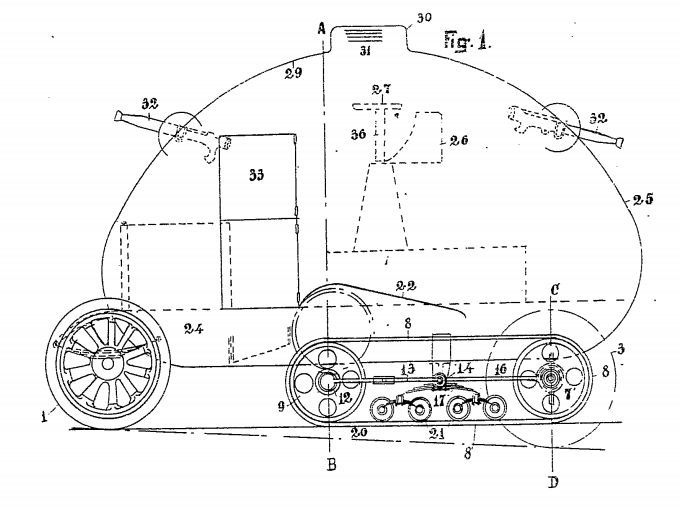 The primary purpose of the patent was specifically concerning “some improvements in armored autocars or armed war tanks and, in general, in autocars for heavy loads or in tractors which must be able to move safely and expeditiously both on loose and inconsistent grounds and on common roads” by means of using an endless track system. Wheeled vehicles were obviously preferable for use on roads and tracked vehicles superior for off-road and, amongst many ideas in this era to combine the two means of traction, Major Corni had his own. His vehicle was to solve the problem of tracked vehicles using the road by simply arranging it in such a manner that the track could be lifted from the ground when not in use. Such a system could be, he proposed, useful for all manner of vehicles from tanks, to trucks, and, lastly, to armored cars. The armored car was drawn and the truck was described, but, sadly, Corni did not provide additional information as to how he envisaged these design elements into a tank. 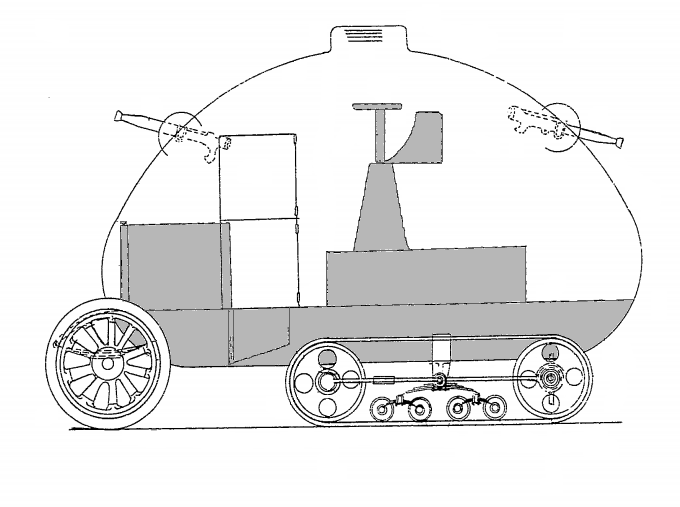 The highlighted area within the structure of the armored car showing the area filled by the mechanicals underneath the armor and the unusual raised driving position. Source: Patent FR588288 as modified by the author

Most armored cars were based upon a truck chassis, but the Corni vehicle, in order to save weight, did away with this rather inefficient idea. The layout remained inherently ‘truck-like’ but the support of the vehicle was by means of the armor itself, a monocoque hull. The front wheels would remain in place and be used (un-driven) merely for steering. The frame of the truck would be maintained along with the engine and transmission providing drive to the rear axle. The driving cab area though was gone, removed and replaced with a firing position for the forward-firing weapon and a built-up structure roughly in the middle of the load area for the truck. On top of this load area sat the driver perched very high off the ground using a horizontal steering wheel and with his head poking up into a small fixed vision cupola providing 360º of vision. This had the advantage of giving the driver good all-round vision as well as permitting for the rapid change of direction with the seat simply rotating around this central steering column. The pedals and gear lever, however, did not rotate which would have meant a considerable degree of skill would be required to suddenly change around going backward. A large rectangular-shaped door was on each side of the hull drawn in such a way as to show a double opening door. No other fittings or description was provided. 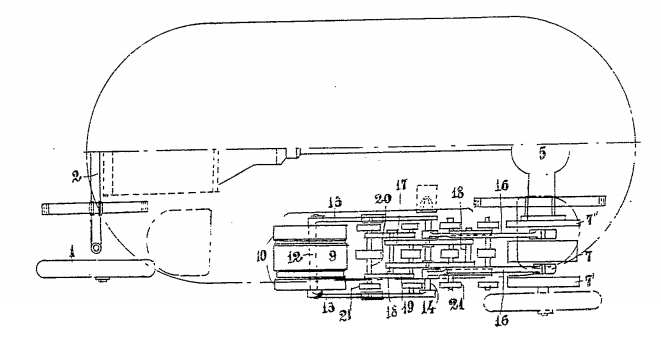 Arrangement of engine, transmission and track unit for the Corni half-track. Source: Patent FR588288
The track unit itself featured two large wheels, one at each end, with the rear-most one directly driven on the rear axle of the vehicle. Between these wheels were four sets of wheels arranged in 4 rows of three with the three arranged side by side and all connected together by a system of links. These four sets of wheels were connected, in turn, in pars to a single set of elliptical leaf springs to a common, central anchor point. The anchor point, in turn, was fastened to steel armor forming the structure of the suspension unit. The entire affair could pivot upwards from the rear axle to be raised off the ground when moving onto a road. Off-road, the wheel on the rear axle had to be removed as it was of a larger diameter than the rear wheel of the tracked section and likely would simply be stowed on the side of the vehicle. 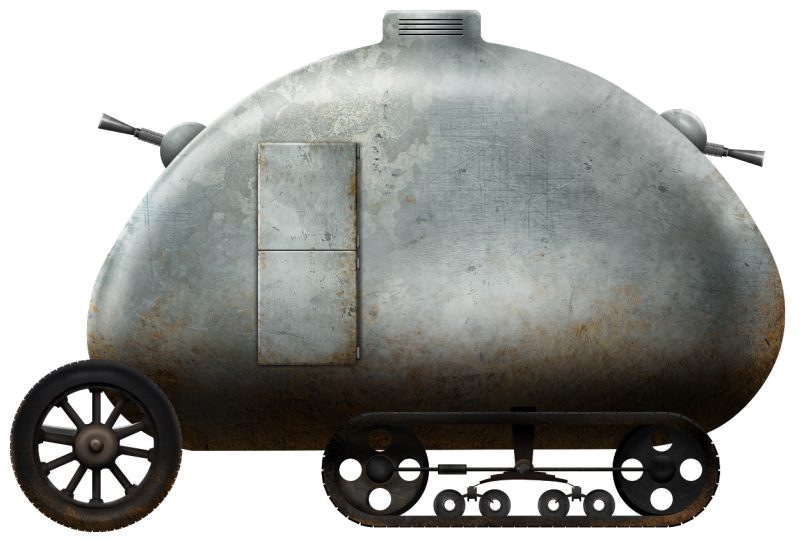 The armored body itself had two large recesses formed within the sides of it to accommodate the raised track units and, although no thickness of plate is specified, as it had to support the entire structure of the vehicle, it would not be thin. The armored body continued underneath the vehicle as well forming a boat-like hull to which the fitting and mechanicals of the vehicle were attached.
Lateral loopholes were on the front and back of the vehicle as were two weapons. One fore, and one aft, which were specified to be either machine-guns or light field guns. Major Corni did not describe these further as the patent was for the design of the hull, driving position, and track system rather than for weapons. 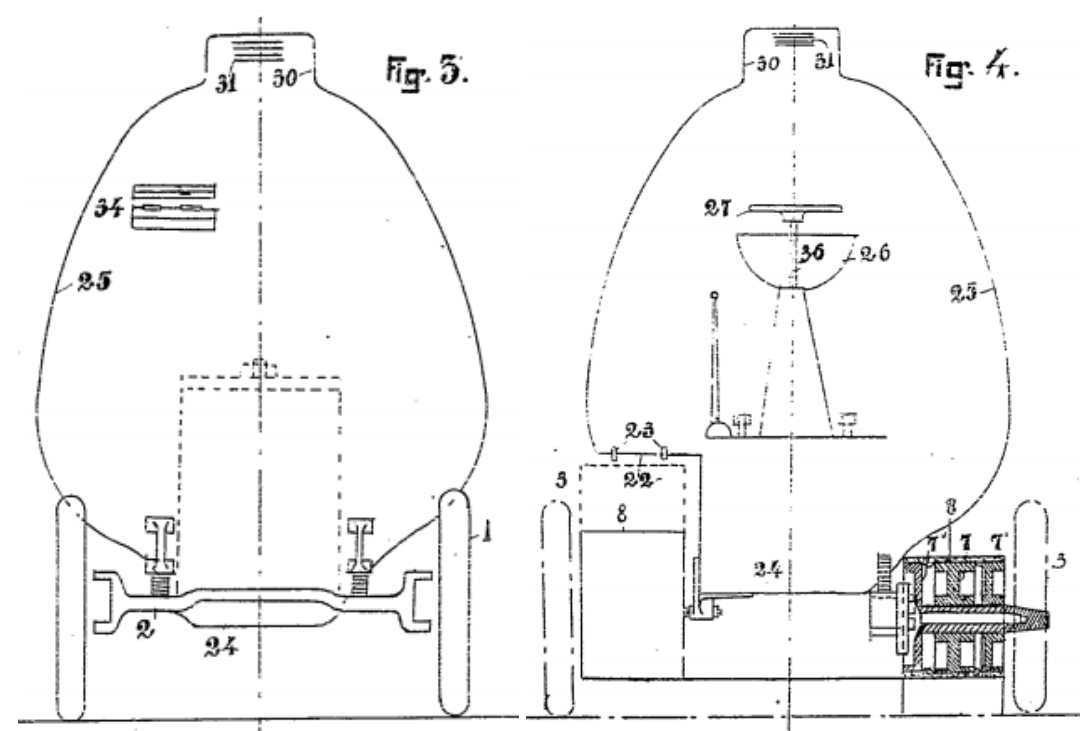 Views of the Corni half-track from the front (left) and behind (right). The structure in the center is the driving position and the rearview shows the recesses into the armor into which the tracked section moves. Source: Patent FR588288 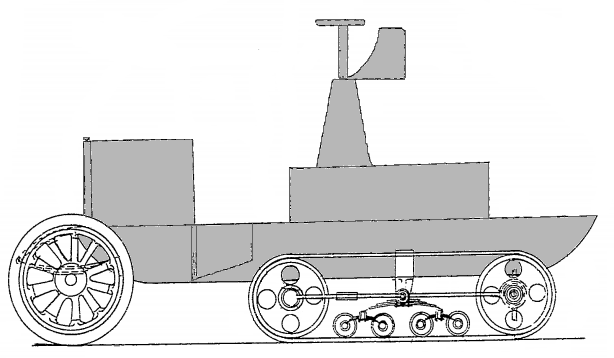 Basic vehicle structure without an armoured body. Source: Patent FR588288 as modified by the author
Major Corni’s half-track design was an unusual design combining elements of wheel-cum-track vehicles, monocoque hulls, and the unusual raised driving positions. Unfortunately for him though, this idea does not seem to have gained any official interest at all despite offering the potential.

One reply on “Corni Half-Track”

this was such a corny article