This vehicle started life in early 1941 with the need for a light armored vehicle for use in North Africa. Italy had a long experience in mobile desert warfare having used armored cars in the desert before the First World War. They had in its possession the design of a very mobile heavy artillery tractor, the T.L.37 (Trattore Leggero – Fast tractor). The T.L. 37 was an excellent vehicle with very distinctive oversized pneumatic tires and it was to form the experimental basis for a new light armored car built by Fiat SPA for colonial service. The vehicle would sometimes be referred to as the T.L.37 Autoblindo, but also as the A.S.37. ‘A.S’ stands for Autoblindo Africa Settentrionale (North Africa Armoured Car), although the A.S.37 name was somewhat confusingly later applied to the armored personnel carrier which followed this one. 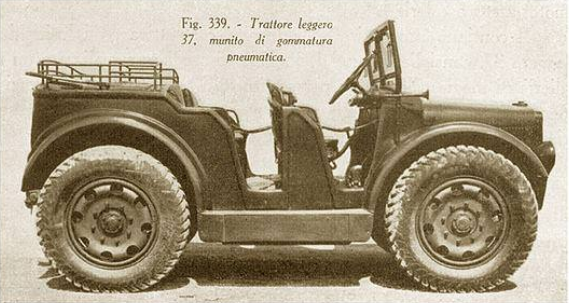 Just like the T.L.37, the engine for the vehicle was at the front, with the driver positioned at the front left. It retained the basic frame from the T.L.37 with the same over-sized pneumatic tyres, but now an armored body enclosed the vehicle. At least one door, consisting of two parts – upper and lower – was on the right-hand side and a second door on the other side. The back of the vehicle sloped off sharply from the roofline and on top was a small turret. As the A.S.37 personnel carrier version followed this vehicle, it can be surmised that there was no second front seat (on the left) and that the fuel tanks were positioned near the back around the rear wheels.
Power for the T.L.37 was provided by a model 18VT 4.053 4 cylinder petrol engine which delivered 52hp at 2000rpm and the later A.S.37 used a modification of this engine delivering 67hp. It is not known whether the Autoblindo T.L.37 used the original 52 hp or the upgraded model. 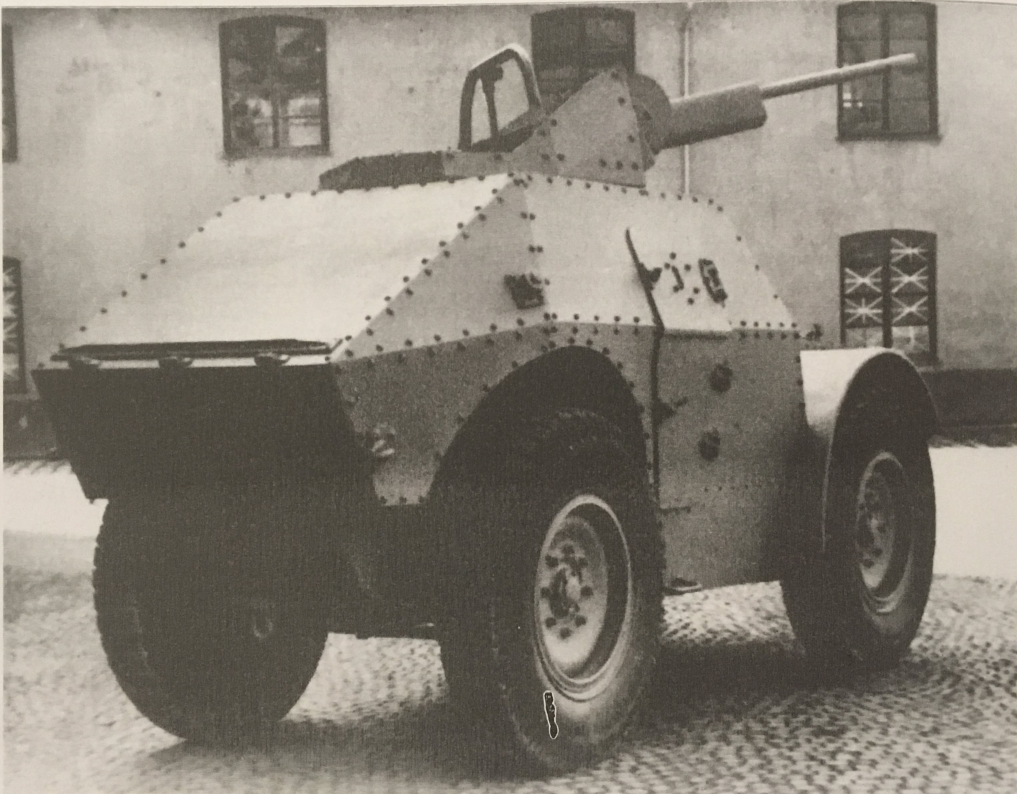 The vehicle was protected by flat steel plate armor up to 8.5 mm thick and probably down to 6 mm thick in places, bolted to a steel frame. This armor would have provided adequate protection to small arms fire and shell splinters. The vehicle was fully enclosed except for the turret. Initially, it had been planned to use the turret of the AB.40 armored car, which would have meant it was armed with a pair of Breda Model 1938 8 mm machine-guns, but for unknown reasons, this turret was not available. Instead, a small open-topped turret based on that used on the L.6 light tank was mounted. The turret had no back or roof and the sides were very short and steeply angled backwards. A large hooped ring, possibly for mounting a machine-gun for protection from aircraft went over the turret. The turret mounted a single Breda Model 1935 20 mm cannon. 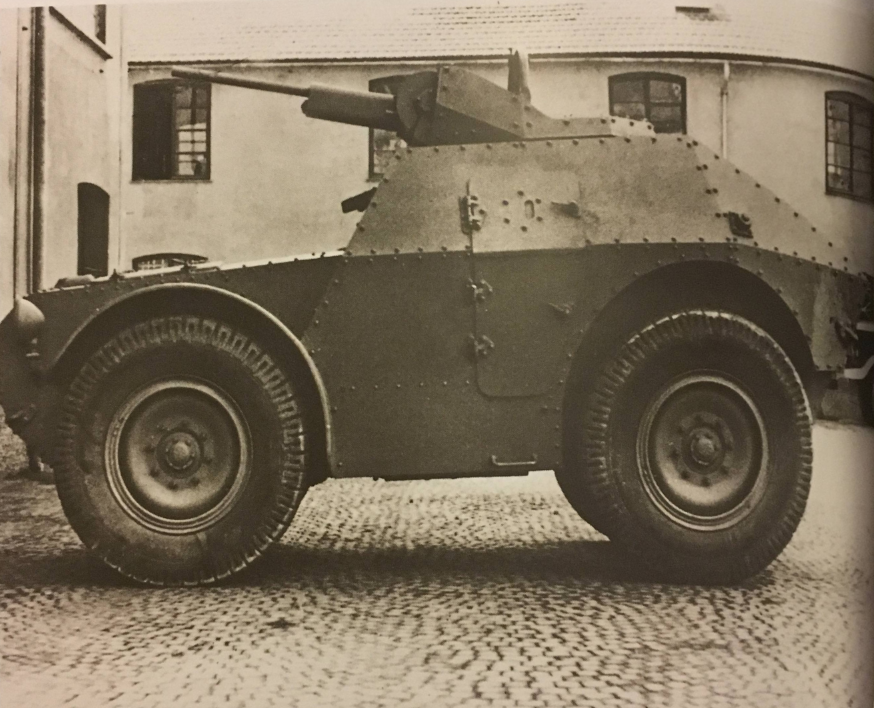 Left side view of the Autoblindo T.L.37. Photo: Arms of Breda 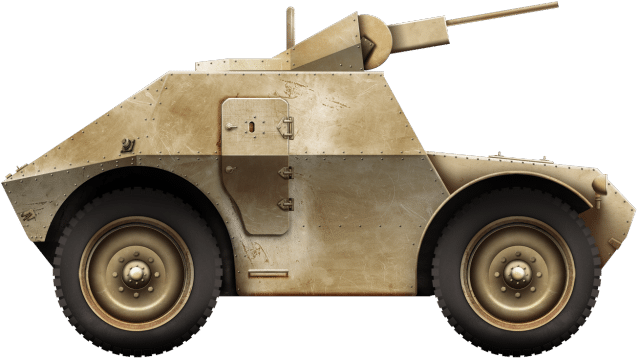 Illustration of the Autoblindo T.L.37 ‘Autoprotetto S.37′ produced by Yuvnasva Sharma, funded by our Patreon Campaign.

Following the requirement in early 1941, Fiat SPA built this single prototype and it was sent to North Africa immediately for trials. Unfortunately, there was no opportunity to effectively evaluate the vehicle under combat conditions. The T.L.37 Autoblindo (A.S.37) is reported to have been lost at Sidi Rezegh (located south of the main road between Tobruk and Bardia, East of El Adem) possibly through a mechanical failure in Autumn 1941. 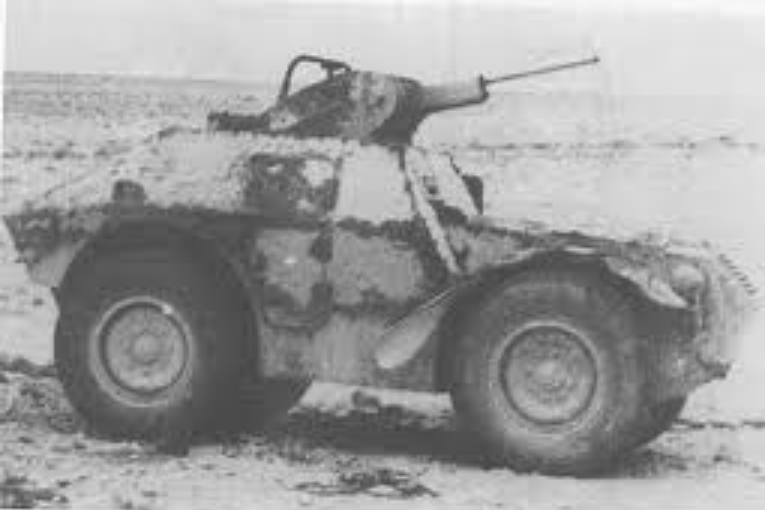 Autoblindo T.L.37 after it was found by the British showing no sign of battle damage. Photo: Tank Museum, Bovington
Fiat SPA was not to be dismayed by this failure, however. Instead, they further refined the vehicle, abandoned the turret and sloped rear, and by April 1941, had already got plans in hand for an open-topped version for transporting troops and stores or for convoy escort duties. That vehicle was also known as the A.S.37. A vehicle looking very similar to this one but without the turret.

This website uses cookies to improve your experience while you navigate through the website. Out of these cookies, the cookies that are categorized as necessary are stored on your browser as they are essential for the working of basic functionalities of the website. We also use third-party cookies that help us analyze and understand how you use this website. These cookies will be stored in your browser only with your consent. You also have the option to opt-out of these cookies. But opting out of some of these cookies may have an effect on your browsing experience.
Necessary Always Enabled
Necessary cookies are absolutely essential for the website to function properly. This category only includes cookies that ensures basic functionalities and security features of the website. These cookies do not store any personal information.
Non-necessary
Any cookies that may not be particularly necessary for the website to function and is used specifically to collect user personal data via analytics, ads, other embedded contents are termed as non-necessary cookies. It is mandatory to procure user consent prior to running these cookies on your website.
SAVE & ACCEPT
5 shares