In early 1921, the British government’s Tank Board and its General staff representative Colonel John Frederick Charles Fuller were considering their next tank design. The result of their deliberations resulted in a set of very loose requirements. These requirements stated that this new tank would need to be usable in the tropics. The policy gave a list of areas that were seen as likely to be trouble spots in the future which included the Balkans, Russia, India, and South America. The latter two regions were the cause for the ‘tropics’ requirement. Furthermore, it was envisioned that the best way to combat a tank was with another tank.
Col. Fuller discovered that the Master General of Ordnance (MGO) had been working with the firm of Vickers on a new tank. He was shocked and saw it as a usurpation of his authority when in reality it was not. Col. Fuller has, in some of his works, tried to portray himself in a good light, and a British tank of this period that did not have his oversight would be rather difficult to explain, especially when he was involved with the failing Department for Tank Design and Experimentation, run by Philip Johnson.
The MGO ordered three prototypes of the new tank design to be built, these were constructed at the Vickers Erith plant near London. The first being completed in November 1921. 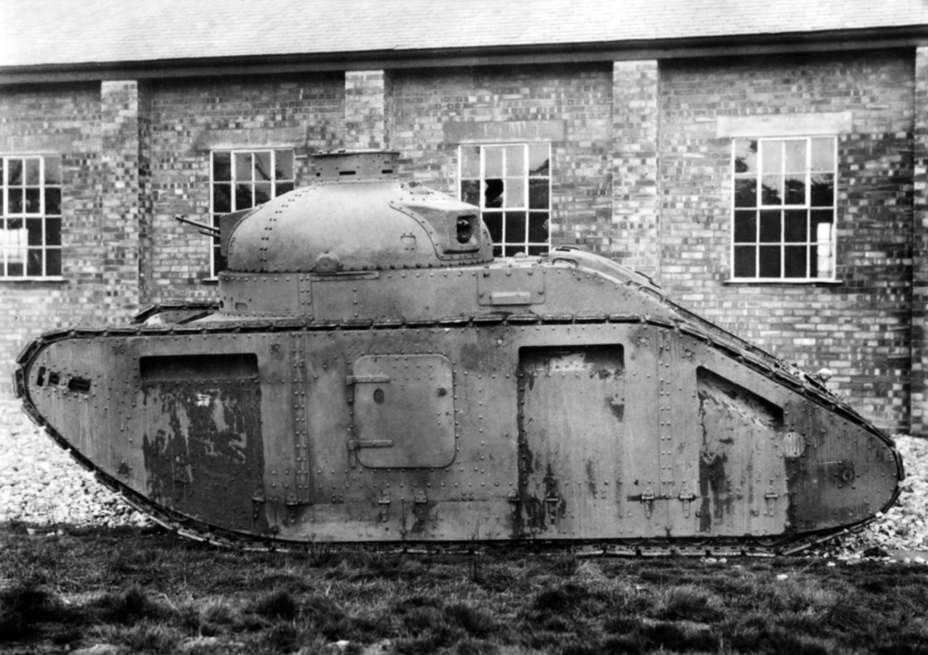 The No.1 tank was a rhomboid in shape, with a striking resemblance to a miniaturized First World War tank, although the front was more curved. On top of this sat a superstructure, with a semi-circular front. The sides of the superstructure were inside the width of the track run. On top of this superstructure was a domed turret, with a centrally placed cupola. Three barbettes were placed every 120 degrees within the turret, these held ball mounts for Hotchkiss machine guns. A fourth ball mount was placed in the turret roof for anti-aircraft work.
The driver sat at the front, in a chair that was described as ‘sumptuous’, and had ‘barber chair’ like controls to get the perfect driving position. The controls featured a large steering wheel, with two circular wheels for adjusting the transmission and which could, in theory, have a continuously variable number of gears.
These gears were provided by a Williams-Jenney hydraulic transmission, made by Variable Speed Gears Ltd. of Crayford, London. This was the same model of transmission that had been fitted to the failed Mk.VIII Tank. And which had originally been used onboard ships to power winches. Power was provided by a six-cylinder Wolseley engine, located behind a firewall at the rear of the vehicle.
The tracks were extremely basic design being nothing more than a flat plate with a pressed indentation which was filled with a wooden sole plate. 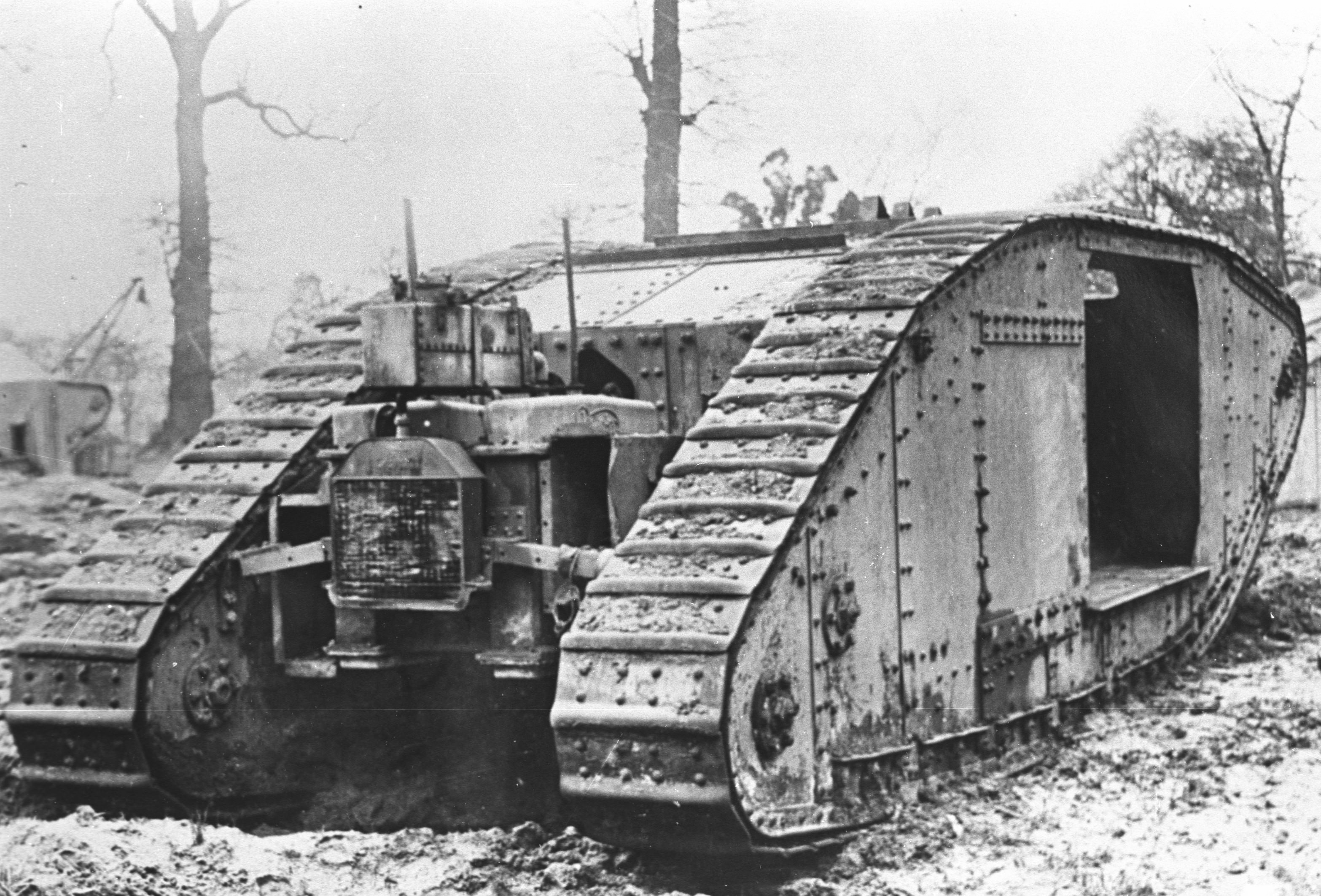 When the No.1 tank was completed Vickers decided it was too noisy and not reliable enough. Despite this, the tank was dispatched to the War Office tank testing section at Farnborough. There it was found that the transmission was prone to severely overheating. One of the tests the tank was subjected too was a race between the No.1 tank and the Light Infantry Tank and, according to Col. Fuller, a Medium D. The No.1 tank lost and came dead last. In 1922, the No.1 tank was returned to Vickers and fitted with better tracks and a more powerful engine. In March of the same year, she was handed back to the War Office. However, no further tests were carried out, and by March 1923 she was listed as derelict and in the tank testing sections stores. 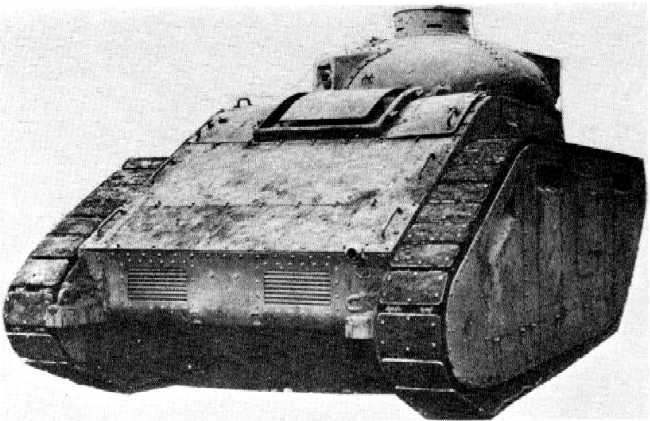 Shot of the rear of the No.1 tank, you can see the access ports to the engine and transmission, as well as the basic track design. Photo: Aviarmor.

The Vickers No. 1 Tank armed only with machine guns.

The Vickers No. 2 Tank armed with the 3-Pounder 47mm Gun.
Both Illustrations are by William ‘Rhictor’ Byrd, funded by DeadlyDilemma through our Patreon Campaign.

Work started on the No.2 tank in July 1922 and would be completed in July 1923. There was one big change in this design over the No.1 tank. On the 15th March 1922, the Director General of Artillery’s (DG of A) office issued an order that all future tanks must be armed with a quick firing (QF) gun. Thus, the No.2 tank was equipped with a 3-pounder (47mm) gun. This was a higher velocity weapon than was normally fitted to tanks of the period and followed the General Staff policy about countering other tanks. This combination of policy and dedicated high-velocity armament means that the No.2 tank was likely the first ever tank to be armed to fight other tanks.
There is, at current, no details on the trials the No.2 tank was subjected too, or a list of the faults encountered in the designs, but they must have been numerous, as the design was not taken into service. The No.2 machine was scrapped in 1927. 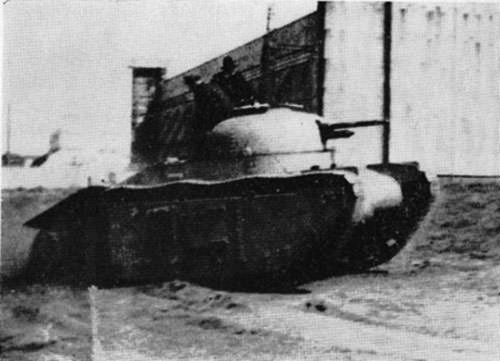 The No.2 tank, you can see in this picture the rear access ports are wide open. This is an attempt to cool the transmission. The cooling problem was down to the oil in the hydraulic system rapidly becoming overheated. Photo: Public Domain
The third machine ordered was built as a gun carrier, with a field gun being loaded onto the bed through a ramp at the rear of the tank. Some websites claim that this prototype led to the Dragon gun tractors, although no hard evidence has been advanced for this theory.

Although ultimately the Vickers No.1 and No.2 failed to produce a successful design, it was likely one of the world’s first modern tanks, taking design features from the Renault FT, such as rear-mounted engine behind a firewall and a single weapon in a turret. Yet it refined these ideas, increased the crew size to something respectable, and included a gun designed for hunting and killing enemy tanks. The idea that the best counter to a tank is another tank is today widely accepted as a truism. Just a handful of years after the tank had been developed this was considered a new concept, one which ultimately proved right.
It should be mentioned here that the speculation on the role of the No.3 machine might have a part to play. There is a theory, although at the time of writing an unfounded one, that the Dragon gun tractor led to the development of the Vickers Medium Mk. I. If this is the case then the No.1 and No.2 were even more important as designs than originally thought.