Of the many designs for tanks submitted to the Australian Army Inventions Directorate during World War 2, there were some very sound schemes, some very outlandish schemes, and then a few very peculiar schemes. The Modra Revolving Light Tank is one of the latter. It was neither enormous nor technically impossible (unlike so many of the ideas submitted to the Directorate) but it was not based on sound military thought either. It found no place in development or use for the Allies in the Second World War, but it is nonetheless still an interesting concept to record as it has several unusual features. It was sketched by the pen of William Frederick Modra, a gardener by profession from Underdale, although it should be noted that since 1935 he had also been on the Port Lincoln Town Council.
Modra’s design was submitted on 15th October 1943, followed in December by several other ideas for war weapons, including an ‘Anti-Personnel Bomb’ and a ‘Multiple Projectile Bomb/Shell’. The anti-personnel bomb was rejected on the basis of the casing being too heavy, which resulted in a smaller charge and reduced destructive effect of the bomb, whilst the Multiple Projection Bomb was rejected on the basis than one larger shell is more effective than many smaller ones, as the weight of the multiple casings detracted from the explosive charge which could be carried. The Revolving Light Tank received slightly more attention before being rejected though. However, the review of the submission does delve into those component parts of the design briefly. 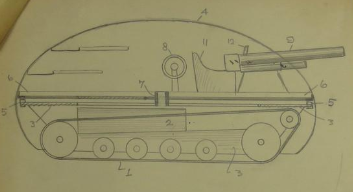 The design of the revolving light tank was based upon a very simple principle: deflection. A curved body is more likely to deflect an incoming projectile than a flat-sided or vertical-plated body, and therefore, Modra extended this idea to cover the entire vehicle. On top of this, he also chose to forego the usual hull and turret layout to have what is effectively a huge turret overlapping all the sides of the small hull inside the vehicle and extending almost all of the way to the ground. In this way, the design is very unusual whilst at the same time still being quite a simple idea providing uniform armor for the vehicle from all directions. The driver, sat in a rather comfortable looking armchair as drawn, steers the vehicle normally with the engine, transmission and fuel tanks in the small hull under the body. The gun is attached to the revolving floor plate which is also attached to the revolving body so that as the vehicle rotates, the gun is also slewed with the body. The suspension for the vehicle was drawn but not described, and shows a large diameter lead and trailing wheel with 4 smaller rollers, but no return rollers for the track. The ground clearance is also extremely small with this suspension system, leaving very little space between the ground and the hull, but also between the ground and the overhanging armor.
This low ground clearance combined with the shape meant that this design would basically have been unable to traverse broken ground, as even a small bump or tree stump would foul either the bottom of the hull or the edge of the armored body. It was on this basis that the design was rejected in total. Not mentioned in the rejection were the other problems with the design, such as how the driver was meant to drive when the turret was rotated as he would still have been facing the direction of the gun, although the position of the springs at the back would indicate that this design could not rotate fully. Neither was there any consideration of how the crew would get in or out of the vehicle, nor any mention of the primary armament and no consideration was given to a secondary armament, such as a machine-gun.
Modra did not discuss how many crewmen he foresaw his design needed, nor did he mention problems such as manufacturing such a large armored dome or how to transport a vehicle this wide. It seems from his drawing though, that some of this might have appeared in additional pages submitted with the design, as parts of his drawing are actually numbered. Sadly, the rest of the file is missing or lost giving perhaps a slightly unfair review of this design being ill-conceived. 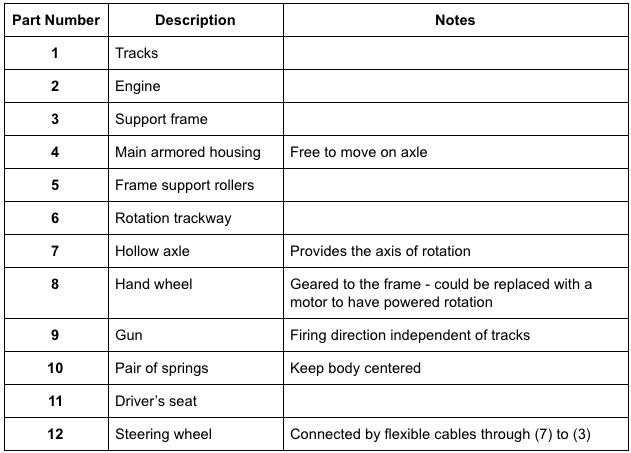 A rendition of the Modra Revolving Tank in a speculative livery modeled by Mr. C. Ryan, funded by our Patreon Campaign.

The design was certainly novel and incorporated a good line of thinking trying to combine good protection from the angles of the armor for a minimum of weight. It was, however, fundamentally flawed in concept as the body was simply sticking out so far and so low that it would foul on the ground. The problems of having the driver in the turret were not addressed either and would later befoul other attempts to have a similar arrangement – most famously in the MBT/KPz-70 program, but also in the Chrysler ‘K’ and the Soviet Object 416.
As it was, Mr. Modra’s designs for this tank and other weapons were rejected. Modra himself was later to become an overseer for the Corporation of Port Lincoln and a member of the town council until his death, aged 59 in June 1953. His obituary noted his “extremely powerful physique” and his “ingenuity”. His ingenuity with regards weapons and tanks did not lead anywhere in WW2, but he was successful in other areas. 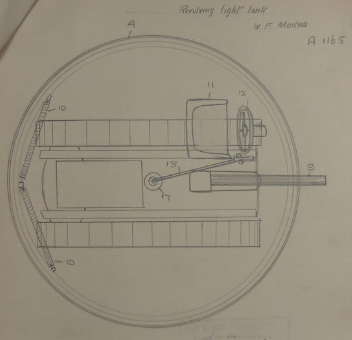 Top view of the layout of the Modra design. Image: Author’s Collection