The brain-child of the famous Professor Ferdinand Porsche, the Landwehr Zug, literally meaning “Land Train”, was one of the first ever hybrid power vehicles. This heavy haulage machine was designed to transport heavy equipment to troops in the field, powered by both diesel and electrocortical drives. There were three versions, each bigger and more powerful than the last. The A-Zug, B-Zug, and C-Zug. They were produced by Austro-Diamler Generator Wagon.

These vehicles entered use in 1912 but would go on to serve through the First and Second World Wars.

Porsche developed his diesel/electric engine in 1900. The first vehicle equipped with this drive was his Semper Vivus road car. It was powered by two gasoline engines that were connected to generators. This formed a charging unit that provided the batteries and motors mounted in the wheel hubs with power. The generators also served as the starter. The vehicle could drive a long distance on electric power alone until the combustion engines were used to charge the batteries. This technology would be used again for the Landwehr Zug, minus the batteries.

The assembly of the vehicle started with a small tractor at the head of the train. It held a 100 hp gasoline engine that powered a generator. This provided current to the tractor’s rear axle motors, propelling the vehicle. With the help of a long cable that spanned the length of the train, this generator also provided power to the wheel-mounted motors of the individual carts. This, of course, meant the trailers were self-propelled and not towed, meaning the vehicle was able to traverse the harshest of road conditions with relative ease. Tangled mountain side roads were no issue either as the individually powered carts could handle the tightest serpentine movements.
This power cable also allowed a relatively heavy vehicle to cross weak or temporary bridges. The tractor would go across on its own, the carts would then propel themselves over the bridge one by one. With a small exchange of wheels, the Land Train could become a regular train, able to run on rails.

With the A-Zug fulfilling the basic rolls, there was a need for a more powerful vehicle. This gave rise to the B and C-Zug. The B-Zug was more powerful than the previous vehicle, able to transport heavier loads such as light cannons and their heavier ammunition supply. More information on this vehicle is not known, unfortunately.

The C-Zug was the largest of the Landwehr-Zugs and was known as the Artilleriegeneratorwagon. It was designed to make Škoda’s 380 mm (15 in) and 420 mm (16.5 in) siege mortars transportable. For this, the tractor’s generators were powered by a 150 hp gasoline engine. This tractor pulled a single trailer with 8 powered wheels. Fully loaded, this train could weigh up to 38 tons, yet it could still reach the respectable speed of 24 km/h (12.5 mph). This particular vehicle would stay in service into the Second World War.

Porsche would continue to make use of his hybrid design. It would prove an integral part of his later tank designs. This includes the VK 30.01 (P) Medium Tank, the VK 45.01 (P) otherwise known as the Tiger (P) and, later, his crowning glory, the infamous Maus super-heavy tank. The power-sharing system would also be transplanted into these vehicles.

The VK 30.01 (P) on the right and the VK 45.01 (P) on the left practicing the power-share system – Photo: Schiffer Publishing
To the “Average Joe”, Porsche is simply known as a luxury sports car producing company. What is much less known is how important one of his earliest developments is. The petrol-electric hybrid is seen as the next step in the life of the combustion engine, but even today, it is still a largely unexplored and sparsely used technology. Only recently has worked really begun again on this type of engine, with vehicles like the Toyota Prius or BMW i8 fitted with this low emission alternative. 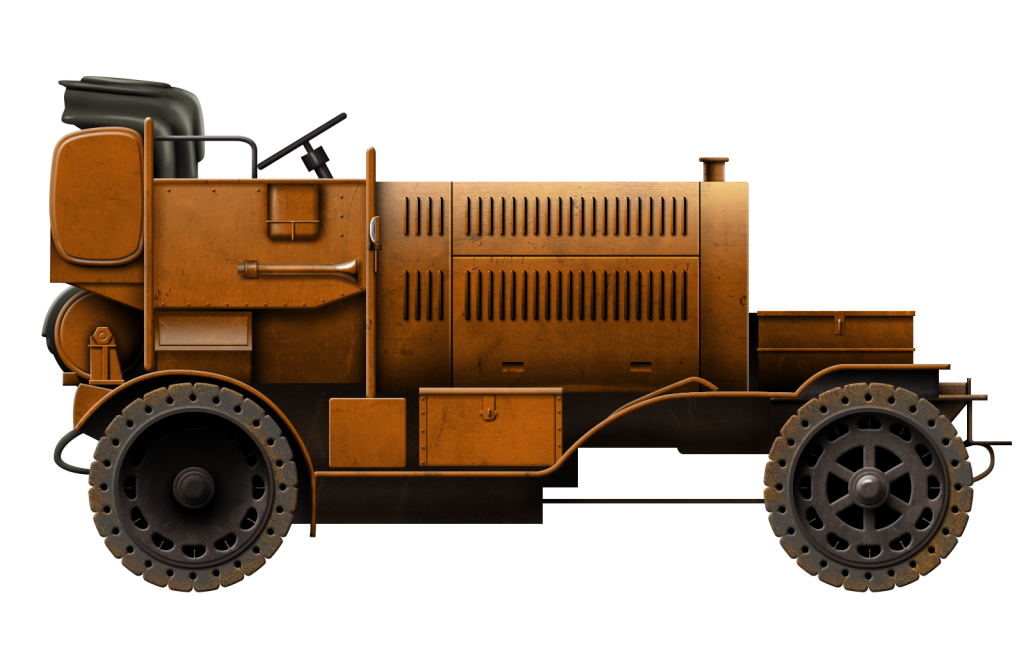 Illustration of the Landwehr Zug, produced by Yuvnashva Sharma, funded by our Patreon campaign.

Genius!
These seem very practical for blitz type of warfare, similar to Desert Storm perhaps, and I’m a little surprised that variants aren’t still in use today. I guess Duece and a Halfs are better when you have lots of them.
I suppose too that these would make juicy targets from the air.
… of course so are convoys!

I find it funny how most people hear “porsche” and think of a sports car, but I think of the Maus and Tiger P.

I think of the Ratte…

Gosh, the hybrid was working 100 years ago. I thought it was a new idea.
Very interesting article.

The Austro-Daimler Landwehrzug was an austro-hungarian vehicle, not a german.

Sorry,but theres a mistake
The “Landwehr-Train” was an Austro-Hungarian vehicle and was invented by Generalmajor Ottokar Landwehr von Pragenau (1868 – 1944) and was built by Österreichischen Daimler-Motoren-Gesellschaft (Wiener Neustadt) where Porsche was technical director since 1906.

Could you go into their military service more? Thx

this article is sadly enough full of factual errors, some of which have been pointed out above.

But i appreciate the effort to bring this little known but very advanced vehicle for the time (and that actually worked as intended) back to the spotlights.

This is why it is on our re-write list. Thank you for the recommendation, we shall look into it.

I’m sorry. Didn’t want to be harsh; i’ll try to type out soem info from the book Skoda heavy guns on it, that concerns mostly the C-Zug

BMW i8 is not a hybrid car, it’s an electric one.

Yes, it is.
You just have to read the Wikipedia article to know:
https://en.wikipedia.org/wiki/BMW_i8

Hybrid (Internal Combustion / battery-electric) vehicle are nothing new, they have been around since before 1900. They are called submarines. Splitting hairs here, but these Zugs, or an Elefant, or a locomotive, driven by electric motors, supplied by a generator that is powered solely by an IC engine is not a hybrid. The book Skoda Heavy Guns by M. Prasil is excellent, by the way.