The entry of the Kingdom of Italy into the First World War in 1915 spurred a lot of technical innovation and, like their British and French allies, the Italians too were faced with the same issues of crossing broken ground and trenches swept by machine gun fire, issues which were costing thousands of lives.
The obvious answer was some kind of armored vehicle able to cross the difficult terrain, protect the crew from machine gun fire and, at the same time, deliver fire to the enemy. Like many early ‘tank’ projects, the modern ideas of tank shape and layout had not been fully considered, leading to a period of genuine innovation, with ideas ranging from giant balls, to walking machines, wheeled tanks, and of course, track laying machines.

The outline for the Testuggine Corazzata (Italian: ‘Armored Tortoise’) began in 1916 after a study by engineers from the firm of Ansaldo led by engineer and industrialist Gino Turrinelli. He was an expert in electrical transmission and suspension from Milan, who had previously founded in 1899 the Societa Italiana Vetture Elettriche Turrinelli and Co. (SIVE), dedicated to building electric cars. Turrinelli concluded that any machine to cross heavily shelled ground criss-crossed with obstacles and trenches must have a uniformly distributed load and that four tractive elements would have to be used operating independently of each other, each with its own electric drive motor. This arrangement, it was felt, would provide stability and allow the vehicle to cross obstacles up to 60cm high without unduly tilting the machine, which would have reduced the effectiveness of the weapons and caused excess strain on the mechanical parts of the machine. 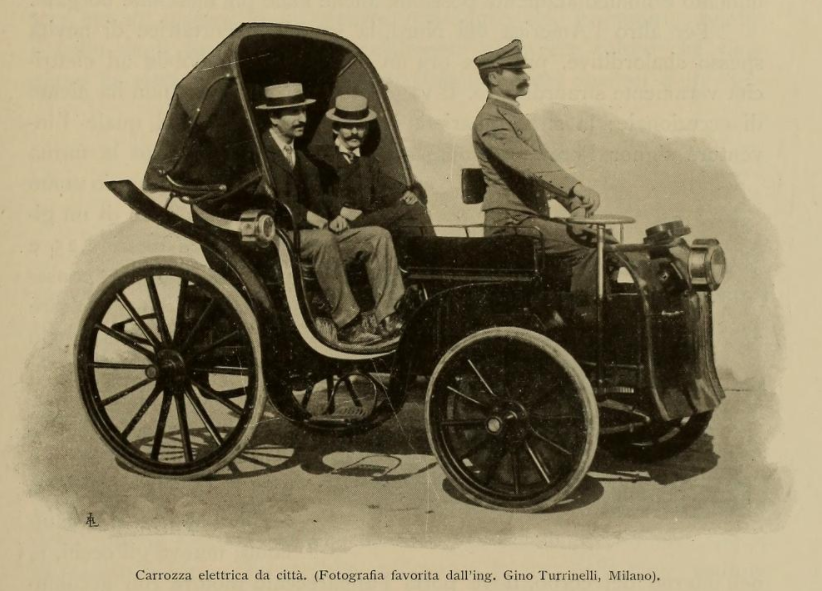 Turrinelli electric carriage, 1902. Source: Belloni
The plans for the vehicle illustrate it crossing various obstacles. These show that, without the ingenious system for the track units, just crossing a 50cm high step would pitch the nose of the machine 2.75 metres into the air. This would render it vulnerable to enemy fire without being able to bring any of its weapons into use. 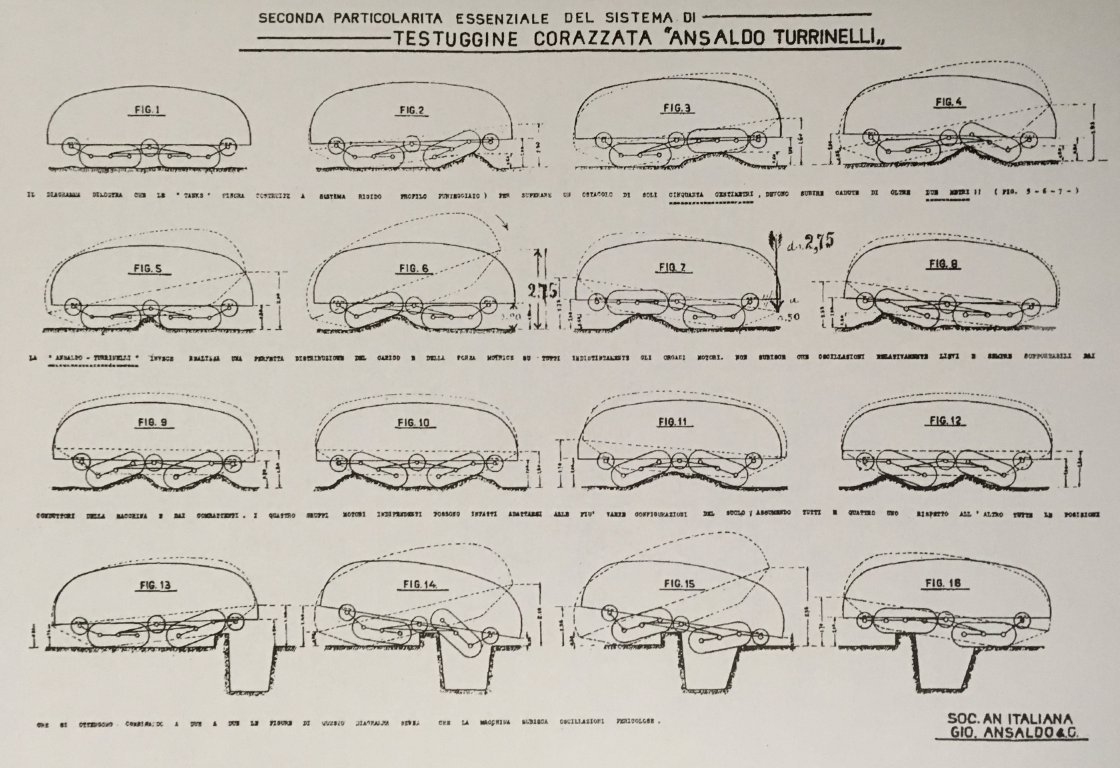 Diagrammatic representation of the obstacle crossing ability of the Testuggine Corazzata. The dashed line represents the position of the vehicle if it were not using the special system of suspension designed and clearly shows a far more stable platform. Source: Pignato
The plans show that the large 200hp 24 cylinder engine was to be mounted transversely in the middle of the machine. At the end of the engine was the large electrical generator which then provided power to 4 electrical motors, each of which would drive one set of tracks. These motors were mounted transversely between each pair of tracks down the centre line of the vehicle and delivered the power via two large chains to the main drive wheels.
The tracks were laid out in a 2 x 2 configuration with each set having two large wheels, one at each end, and two smaller rollers in a stacked arrangement in the centre. Supporting brackets across the track units provided rigidity and each set was attached to one end of a large hinged arm. In arranging the units in this way, each unit could not only be driven independently but could move up and down independently too, rotating not only on the pin at the end of the arm, but around the centre. In front and behind each track unit was the final element in the mechanics for crossing bumpy ground, a large roller which would prevent the machine from bellying out over an obstacle or getting trapped nose first in a ditch or trench.
On top of these track units, within the machine, was a floor which provided the fighting platform for troops along the sides. A central circular turret on top of the Testuggine provided a good lookout point and was presumably intended as the post for the commander of the machine. Two other turrets were built in. There was a position at one end of the machine presumably for the driver who would be provided with a small look out from which to see where he was going, with control provided by means of steering levers which would brake the track units for steering. Due to the choice of an electrical transmission, it is probable that this position was to be duplicated at the other end of the vehicle. This would have allowed the vehicle to quickly get out of a sticky situation, especially since the front driver had no way of seeing backward otherwise. 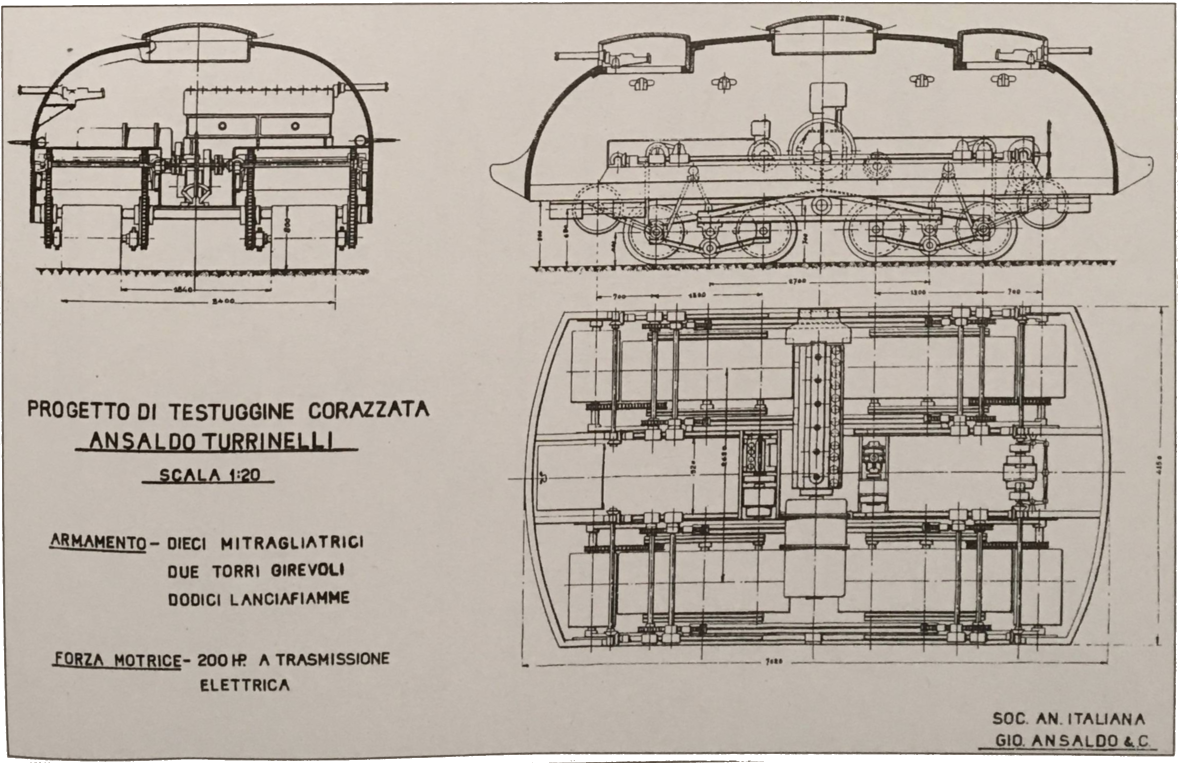 It is hard to understand the size of the machine from the plans, but it was very large indeed. 8 metres long and 4.15 metres wide, the Testuggine was huge and at 4.65m, was taller than any other tank at the time. For comparison, the very large Fiat 2000 was ‘only’ 7.4 x 3.1 x 3.8 m respectively. Armor was also not going to be light. Whereas the Fiat 2000 had up to 20mm of good quality steel armor, this design was meant to sport more than double the protection. Some 50mm of steel armor plate was envisaged which, combined with its rounded shape, would have made it almost impervious to enemy fire.
The weight of the machine is not known, but taking into account it was larger and had more than double the armour of the 40 tonne Fiat 2000, leads to a probable weight for the Testuggine in the region of 80 tonnes. This would have given it a power to weight ratio of about 2.5 hp/tonne, which meant it was not only called a Tortoise, but would move at about the same speed. This large weight would have also given it a large ground pressure and hampered it in the difficult terrain it was meant to handle.

The armament was meant to be just as impressive as the armor. This large machine was to carry no less than 10 machine guns, 4 mounted into fixed loopholes on each side fastened by brackets to the inner wall of the armor, and one more machine gun in each of the turrets, fore and aft. If the 10 machine guns were not sufficient to subdue the enemy, there were also 12 small flamethrowers to be mounted as well. The location of these is less clear, although the plans show them mounted below the level of the machine guns, suggesting 4 flamethrowing points on each side of the machine, with two more probably at the front and rear. Their low position suggests that they were intended for defensive purposes to keep the enemy infantry away, but also for clearing trenches and enemy bunkers.

No crew numbers are provided by the design, but the size and armament provides some insight. With 10 machine gun positions, a commander and at least a driver, though possibly two, the Testuggine would likely have had a crew of no less than 12 men.

This machine was never built, perhaps because it was simply too huge making it too hard to transport. There were limited funds available for tank construction but the actual machine was within the ability of Ansaldo to have been constructed although the actual military value of such a machine would have to be questioned to. At the time it would have been by far the largest tank ever made. Quite what effect it would have had on the Italian battlefields of the Piave cannot be known, though whether it would have worked or just failed, no one would forget seeing such a behemoth and it would have come as quite a shock to their enemies and allies alike. Certainly, by current standards, the design appears somewhat ridiculous overall, but the special suspension system was ingenious, especially considering the state of tank technology in use at the time by France and Great Britain. No orders were made for the Testuggine, and consequently, it was not adopted by the Regio Esercito (Royal Army) and the idea was forgotten. Nonetheless, this would not be the last design by Ansaldo or by Gino Turrinelli, nor the last idea for a powerful war machine from Italy during WW1.

If this thing was produced would probable be more effective as a bunker than a tank, but still a interesting concept.