This article was written by Queensland Museum, in partnership with Craig Moore. This Australian museum holds ‘Mephisto’, the only surviving A7V in the world.

The Rarest Tank in the World: 506 ‘Mephisto’

A mere twenty German A7V Sturmpanzerwagen tanks were built during the First World War, in three production runs of 5, 5, and 10 vehicles, respectively. Fitted with either Röchling or Krupp armor plate, the first vehicle rolled off the assembly line in October 1917. Only one of these twenty tanks has survived, the vehicle bearing chassis number 506 named Mephisto. 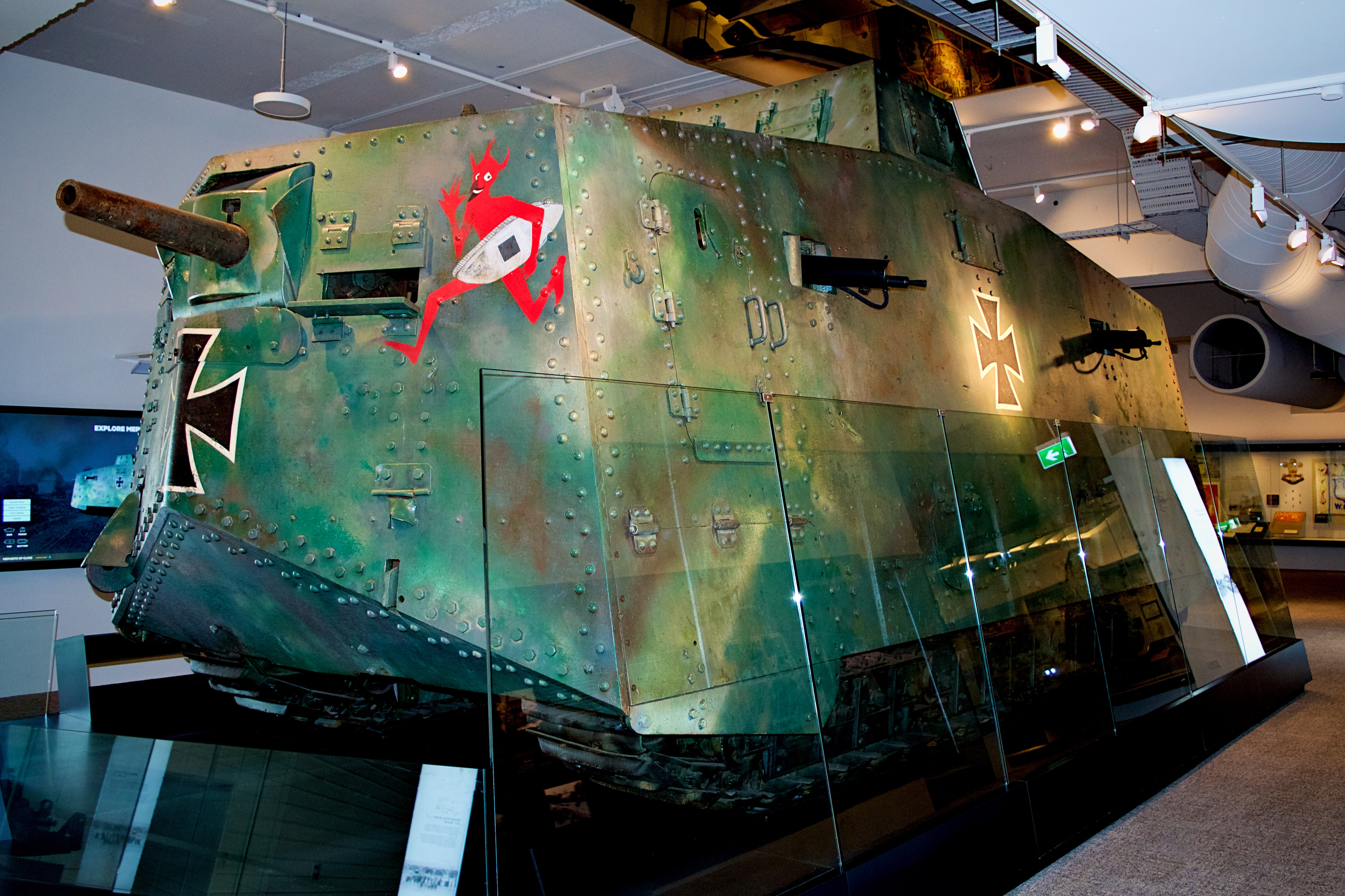 The only surviving Sturmpanzerwagen A7V, Mephisto, as it stands today in the Queensland museum. A part of the armament and the markings are clearly visible in this photo, including the red devil carrying a British rhomboidal tank on the front. Source: Gregory Czechura, Queensland Museum
This A7V, which was captured and later recovered in the dead of night by Australian soldiers of the 26th Battalion during July 1918, survived thanks to its unlikely journey to Brisbane, Australia. 506 Mephisto is not only an incredibly rare tank but a significant artifact of the First World War. The centenaries of Mephisto’s operations on the Western Front and its eventual capture and retrieval (which commenced the tank’s connection to Queensland and Australia) were marked between March and July 2018. Tanks were developed as a weapon to break the defensive trench warfare that had prevailed on the Western Front since 1914. The Allies were the first to develop, produce and deploy tanks beginning in 1916 (Great Britain) and 1917 (France). The German Sturmpanzerwagen A7V represented a reply to the ever-increasing numbers of Allied tanks, but it suffered from being too few in number and too late in entering service to have any decisive impact on the outcome of the final battles of the war. Indeed, most of the tank force fielded by the Germans during the last years of the war was composed of captured Allied, mainly British, models.
The German A7V was essentially an armored box mounted on a tracked chassis that was powered by two water-cooled, 100-horsepower petrol engines. Although a fully operational A7V weighed around 30-tonnes, it was capable of reaching speeds of up to 10 km/h. Armament consisted of eight 7.92 mm MG 08 machine guns (females) or a 57 mm Maxim-Nordenfelt main gun and six MG 08 machine guns (males). The short combat career of the German A7V was due, in part, to lengthy bureaucratic delays and approvals, as well as correction of several crucial design flaws that resulted from the tank having to be built on an all-purpose chassis. The driver’s position, high atop the vehicle, compromised visibility and produced a blind spot directly in front of the driver’s field of vision, which resulted in individual A7Vs being driven into pits, quarries and, in one case, a village pond. 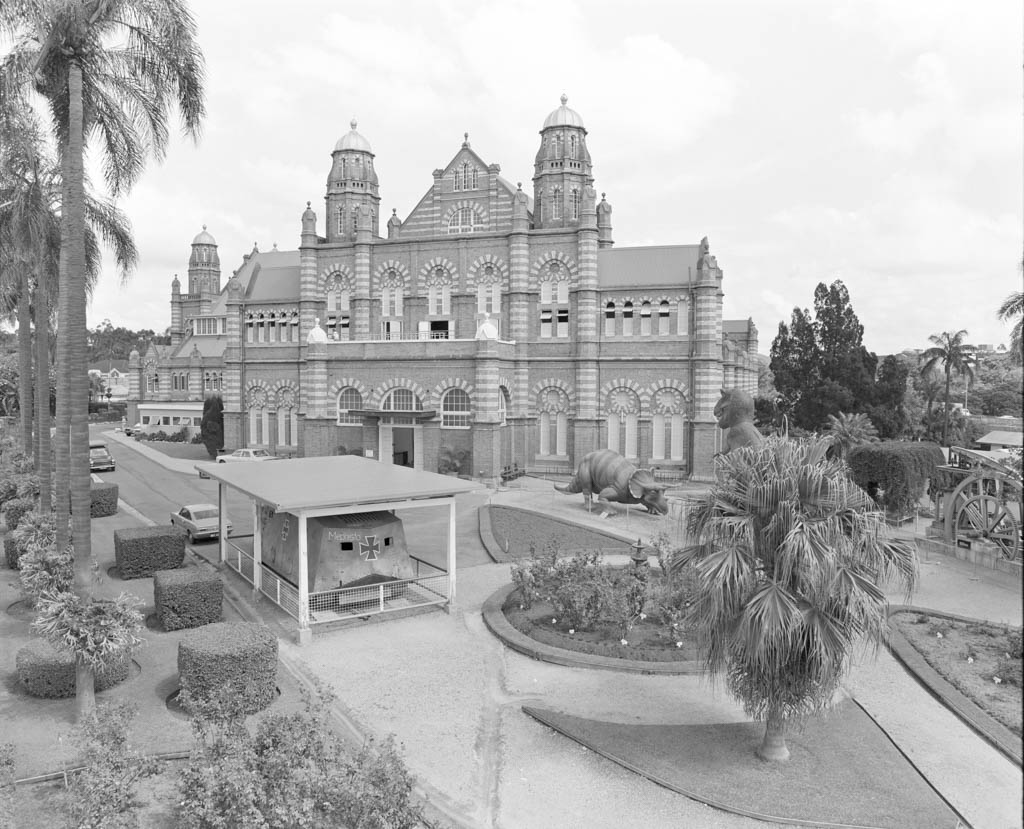 Mephisto in the garden of the Queensland museum next to some similar sized dinosaur models. Source: Queensland museum.
Like all First World War tanks, A7Vs were dogged by mechanical problems (especially overheating and transmission failures), as well as design problems such as low ground clearance, low track height and a chassis that flexed when the tank was in motion. These issues contributed to A7Vs suffering breakdowns and incapacitation by barbed wire and uneven ground in action and training. Modifications were carried out in the field and on the factory floor to rectify some of these problems. Despite these issues, the A7V proved superior to its counterparts, such as the British Mark IV, in both speed and firepower, especially when deployed on firm, even terrain, although when they met in combat for the first time at Villers-Brettoneux in April 1918, it was the British tank which triumphed.
Vehicle 506 was one of the first five A7Vs to be built as part of what is known as the First Lot (Röchling) production run. It was assigned to the first of three A7V detachments (Abteilungen) during December 1917-early January 1918 but did not reach Abteilung 1 at Beuveille until 20 January 1918. Features, including field modifications, of the first A7V production run can be seen on 506 Mephisto. These include a cupola with a single hatch for the driver and the commander, single sheet side armor, and a Blocklafette gun mount with open sights, among others. Inside the front section of the Sturmpanzerwagen A7V tank 506 Mephisto. The 57 mm gun can be seen on the right and the machine gun mount on the left of the door. (Photo: Queensland Museum)

The History of ‘Mephisto’

A7Vs made their combat debut at St Quentin on 21 March 1918 during the 1918 German Spring Offensives. Five A7Vs were assigned to provide close support for infantry assaults on British positions south of St Quentin. Only two of the tanks were able to participate, a female (501) and 506, which was gun-armed. German and British accounts attest to the effectiveness of the gun-armed tank, in neutralizing strongpoints and concentrations of infantry. The A7Vs were then returned to their base near Charleroi for repair and maintenance. At this point, 506 was transferred to Abteilung 3, where it was repainted and named Mephisto after the Devil in the Faustus legend (another A7V, 503, was named Faust). 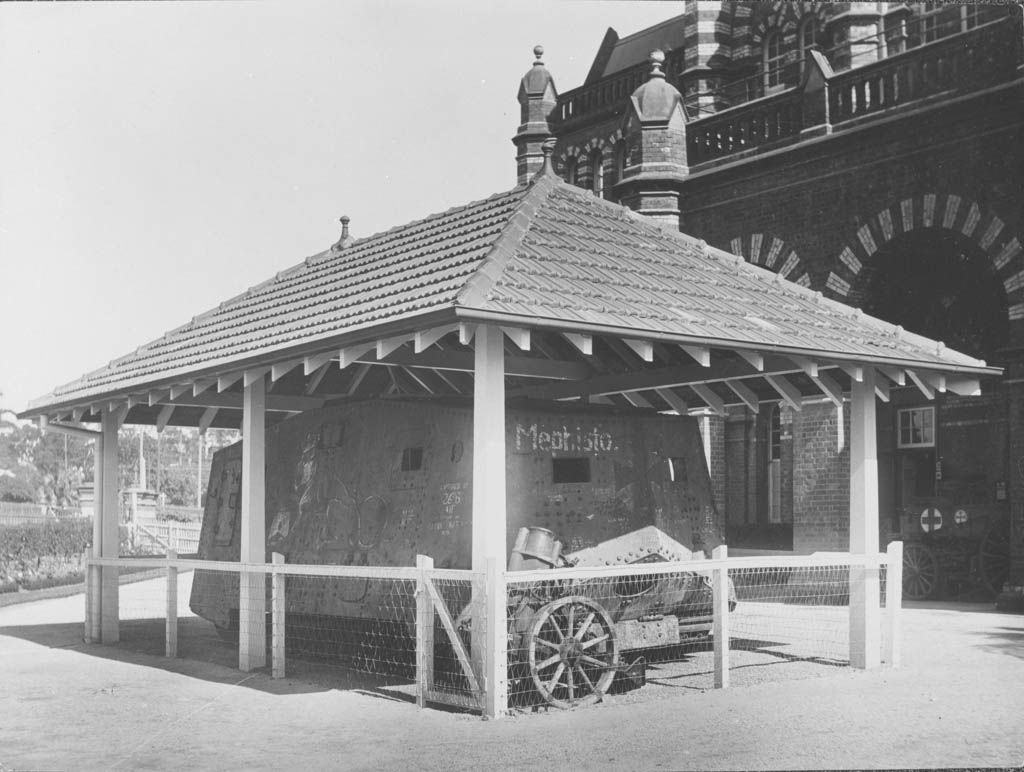 Sturmpanzerwagen A7V Mephisto after it has arrived at the Queensland museum. The original paint scheme and the imperial lion can still be seen. Source:  Queensland Museum, The Gregory Czechura collection
In late March and early April 1918, the Germans attacked the small, strategically placed town of Villers-Bretonneux, France in an effort to capture or neutralize the vital Allied transport hub of Amiens. Villers-Bretonneux was held after a successful Allied counter-attack led by Australian troops from 9th Brigade. The Germans staged a second attack on Villers-Bretonneux on 24 April 1918 that included three groups of A7Vs. 506 Mephisto was assigned to the second group of A7Vs, consisting of six tanks, given the objective of taking objectives (Monument Farm, Monument Wood, and the Bois d’Aquenne) immediately to the south of Villers-Bretonneux. The German attack on the first day was successful and during the battle, the first tank versus tank battle was fought between elements of the third group of A7Vs and British medium and heavy tanks operating near Cachy to the southwest of Villers-Bretonneux. During the fighting around Monument Farm, Mephisto became stranded when the edge of a shell crater it was passing over collapsed under its weight.
Mephisto was abandoned by its German crew but not before being stripped of its machine guns, the gun’s breechblock and other essential items according to standard operational practice. Mephisto lay in No Man’s Land for three months before its capture by the 26th Battalion AIF (commanded by Major, later Lieutenant-Colonel, James Robinson) on the night of 17/18 July 1918 and its subsequent recovery, with the assistance of the British 1st Gun Carrier Company, from under the noses of the German troops opposing them on the night of 22-23 July 1918. The dangerous retrieval operation was carried out under fire on the very night that the Germans unleashed a heavy poison-gas barrage on the Villers-Bretonneux area. Most of the Australian and British soldiers involved in the recovery became gas casualties, but the operation was nonetheless successfully completed. The war prize Mephisto was now securely in Allied hands and quickly moved under cover in the nearby Bois l’Abbé. 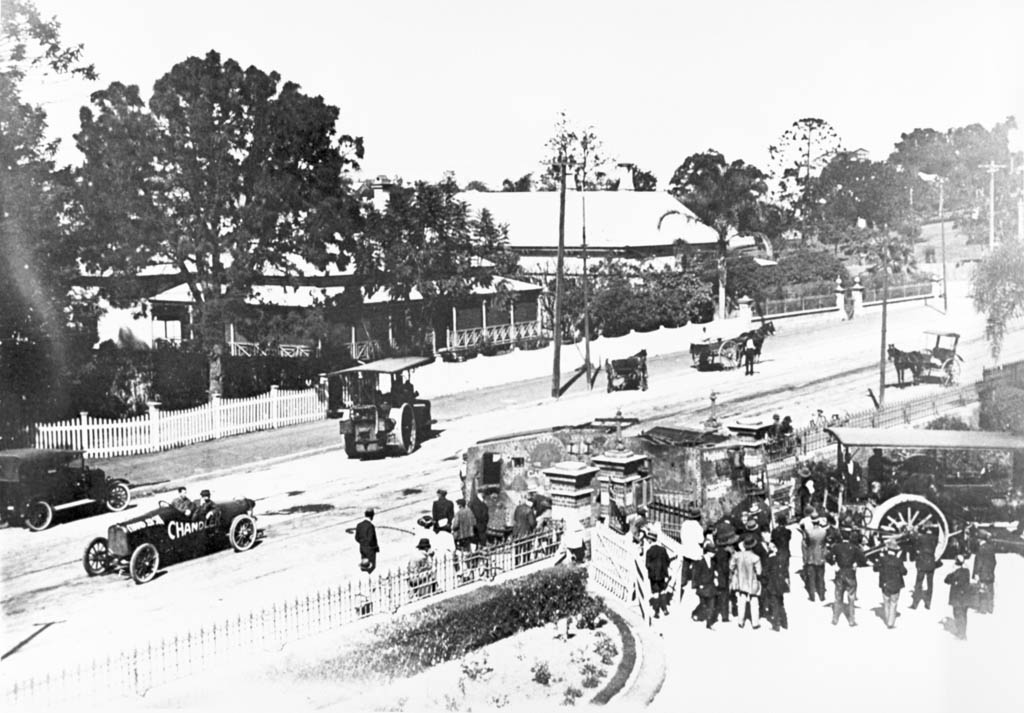 Mephisto being moved into the Queensland museum yard. The two steamrollers used to tow it can be seen in the photo. Source: Queensland museum.
Mephisto was then moved to the British 5th Tank Brigade’s Training Ground at Vaux-en-Amienois where it became an object of curiosity and ‘canvas’ for soldier art, including that of a British lion resting its paw on an A7V. Among the soldiers who visited Mephisto were the six ‘TANK BOYS’, who left their names hammered into the rear armor of Mephisto. They were not participants in the capture and recovery of Mephisto but were part of the Australian contingent training and preparing to work with British tanks and crews in the planned Battle of Amiens and other Allied offensives along the Western Front in the last 100 days of the war.

From Vaux-en-Amienois, Mephisto was moved to London via Dunkirk before being shipped to Brisbane on the SS Armagh, leaving England on April 2, 1919, and arriving in Brisbane on the June 2. It remained at the wharves for six months before being moved to the Queensland Museum, Fortitude Valley, on 23 August 1919. It was an eleven-hour operation which required the use of two Brisbane City Council steamrollers to tow Mephisto to its new home. It was initially placed on display outside, exposed to the elements in the gardens of the museum, where it remained as an iconic object greeting visitors for over sixty years. 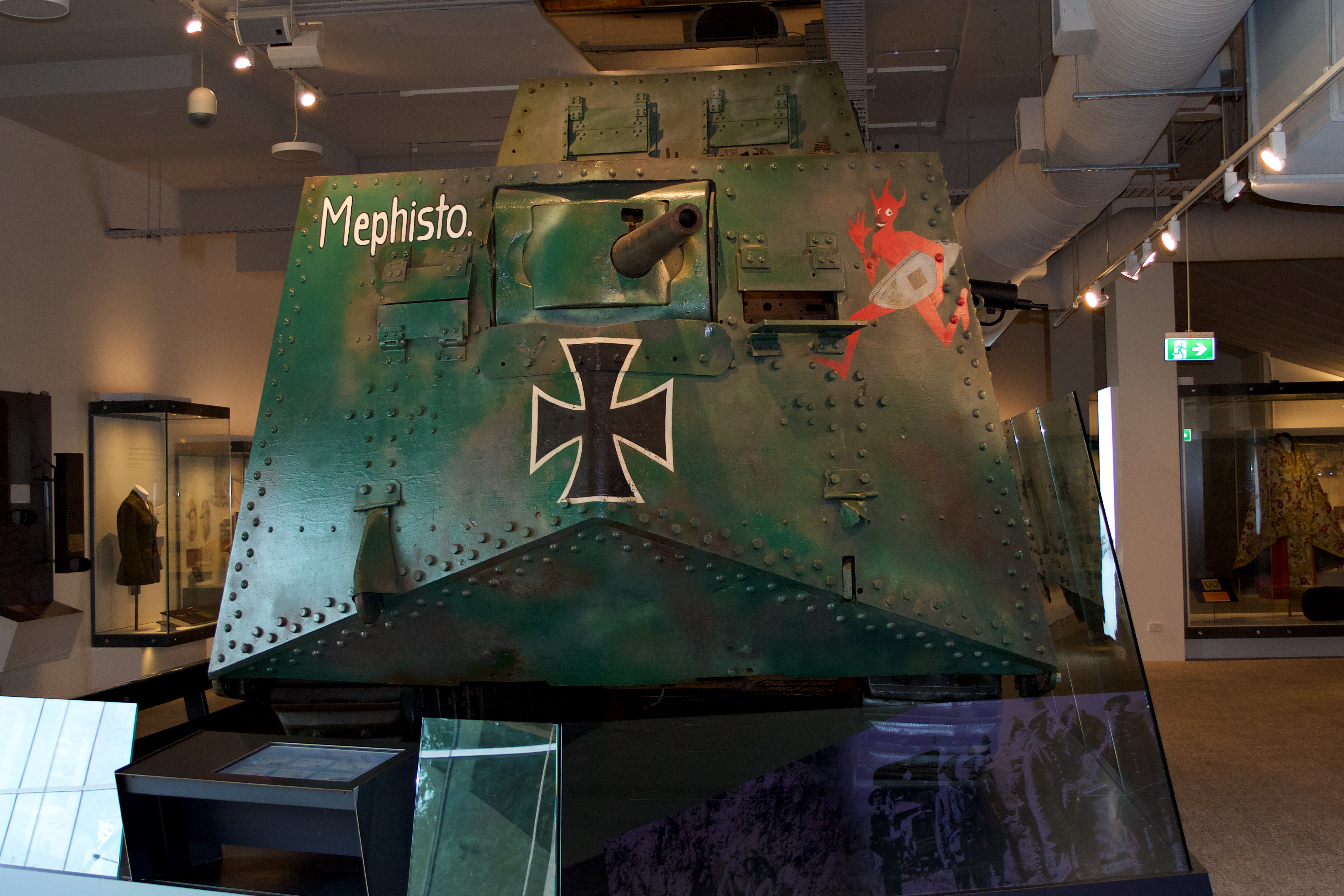 Front view of the Mephisto at the Queensland museum. The top compartment, which housed the driver and the commander, is visible on top, along with their viewports. The wedge shape of the front armor is also apparent, used decades before the Soviet IS-3. Source: Gregory Czechura, Queensland Museum
In 1986, Mephisto was moved to Queensland Museum’s new location at South Brisbane where it remained until it sustained minor damage in the 2011 Brisbane floods when water reached the level of its tracks. Mephisto has undergone extensive conservation and restoration treatment during its time with the Queensland Museum, even at one time being preserved in a climate-controlled plastic bubble at the Workshops Rail Museum, Ipswich. Between 2015 and 2017, Mephisto was loaned to the Australian War Memorial in Canberra as part of the Centenary of the First World War.
After being held in the Workshops Rail Museum, Mephisto finally returned to the Queensland Museum, South Brisbane in late 2018. The tank now features as a major interpretative and commemorative element of the Queensland Museum’s new Anzac Legacy Gallery that opened to mark the centenary of the Armistice on Remembrance Day 2018.

To commemorate the centenary anniversary of A7V Mephisto’s capture and recovery, Queensland Museum has released a fully illustrated reference guide to the tank’s history and its journey to Australia. Mephisto: Technology, War, and Remembrance by Jeff Hopkins-Weise and Gregory Czechura includes detailed diagrams, technical schematics, damage reports, and photographs of Mephisto as it was during the First World War, and as it is found today. Mephisto details the history of this primitive armored vehicle against the backdrop of the industrial innovations and societal changes of the First World War. 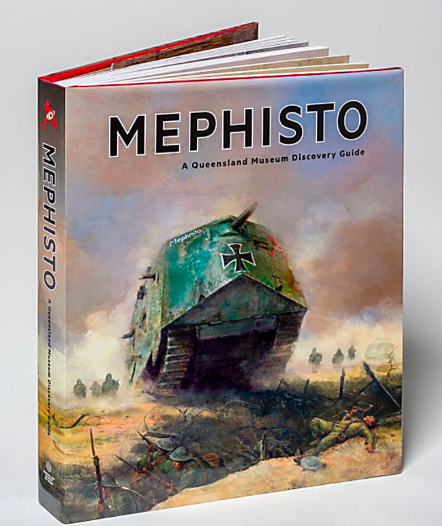 The Queensland Museum has published a Mephisto discovery guide book covering the history of the tank. This is the front cover. (Photo: Queensland Museum)
Mephisto: Technology, War and Remembrance book is available now through the Queensland Museum Shop website HERE.
To see the single surviving Sturmpanzerwagen A7V tank in the world in person, entry is free to the Anzac Legacy Gallery at Queensland Museum, Brisbane, Australia.

Illustration of the Sturmpanzer A7V number 506 ‘Mephisto’ in its original markings. Colors based on the restored version presently at the Queensland Museum, Australia. Illustrated by Tank Encyclopedia’s own David Bocquelet.