The beginning of the twentieth century saw the emergence of the first armored car designs. The first vehicles were partially armored, like the British Simms’ War Car and the French Charron, Girardot & Voigt (CGV) of 1902. Fully enclosed vehicles started to appear in 1905, like the armored car from CGV and the Austrian Austro-Daimler Panzerautomobil. Inspired by these vehicles, German engineer Heinrich Ehrhardt started to develop an armored car as well, but he had a new idea in mind; exploiting it as an anti-air vehicle. 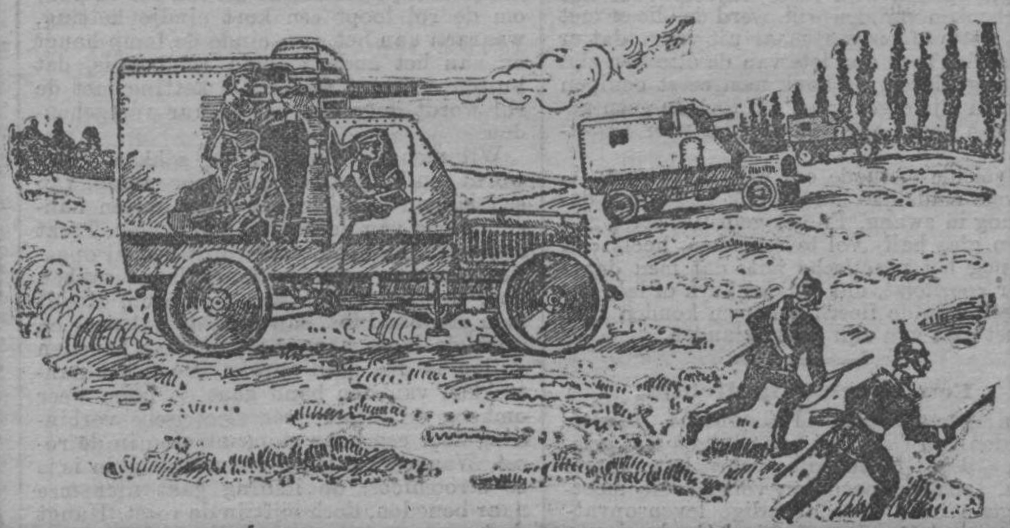 Heinrich Ehrhardt was a German entrepreneur and industrialist. He was born in 1840 in the town of Zella-St. Blasius (Zella-Mehlis). Ehrhardt founded several factories, including the well-known Rheinmetall factory in 1889, located in Düsseldorf, as well as several car factories. In 1903, he founded the Gustav Ehrhardt Automobile AG in his hometown, which started producing both civilian and military trucks. From 1906 onwards, the factory started to produce trucks for the military only. During the First World War, these factories played quite a big role in the German war effort, with their most famous vehicle probably being the Ehrhardt E-V/4 armored car. Ehrhardt died in 1928, at the age of 88.

The Balloon and its Opposition

Already in 1905, Ehrhardt experimented with the idea of an anti-air gun on a car chassis, when he mounted a small-caliber gun on an Ehrhardt-Décauville 16/20 PS chassis. Although the pivot design was inspired by anti-air guns made by Friedrich Krupp since the Franco-Prussian war from 1871, the elevation system and the gun itself were made by Rheinmetall, the company founded by Heinrich Ehrhardt. 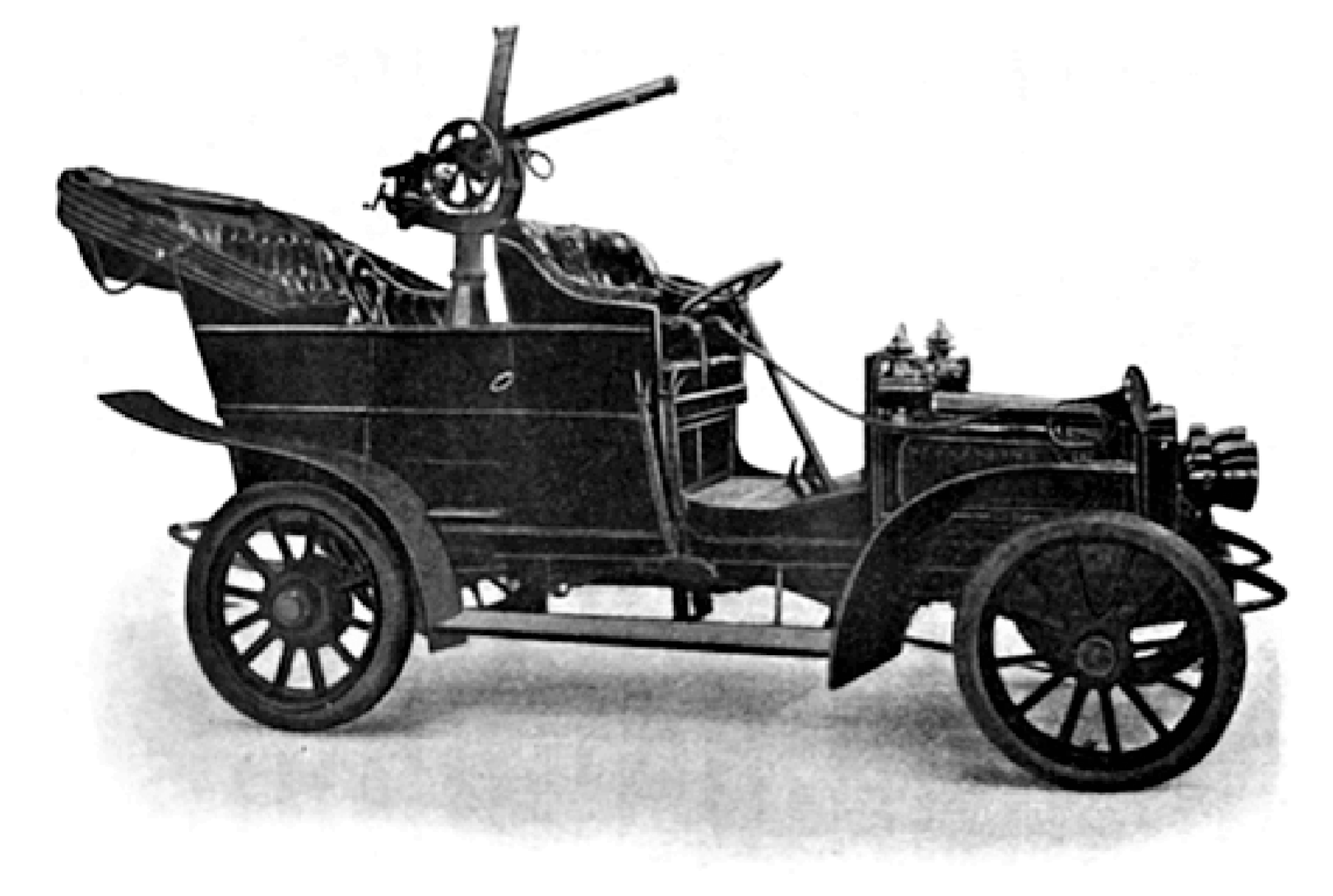 The Ehrhardt-Décauville from 1905, equipped with a Rheinmetall gun. Source: Stanislav Kirilec
During 1906, Ehrhardt designed and built the Ehrhardt BAK. It was ready in time to be presented at the VII. Automobil Ausstellung (Car Exhibition) in Berlin at the end of 1906. It was the biggest car exhibition in Germany at the time and was also visited by the German Emperor Wilhelm II. He also inspected the Ehrhardt. It was the second time an armored car was exhibited at the show, as Opel already presented their Kriegswagen during the previous exhibition in early 1906.

Like many early armored vehicles, the Ehrhardt BAK does not have an ‘official’ name. The most common designation: Ehrhardt Ballon Abwehr Kanone (Anti Balloon Gun), BAK for short, is also used in this article, but the vehicle often goes under different names like Panzerautomobil (armored car), Panzerkraftwagen (armored truck), Ballon Verfolgungsfahrzeug (balloon suppression vehicle), or Ballonabwehr Automobil (anti balloon car). Essentially, these different names are all descriptions of what the vehicle really is, an armored self-propelled anti-air gun, the very first of its kind ever produced. 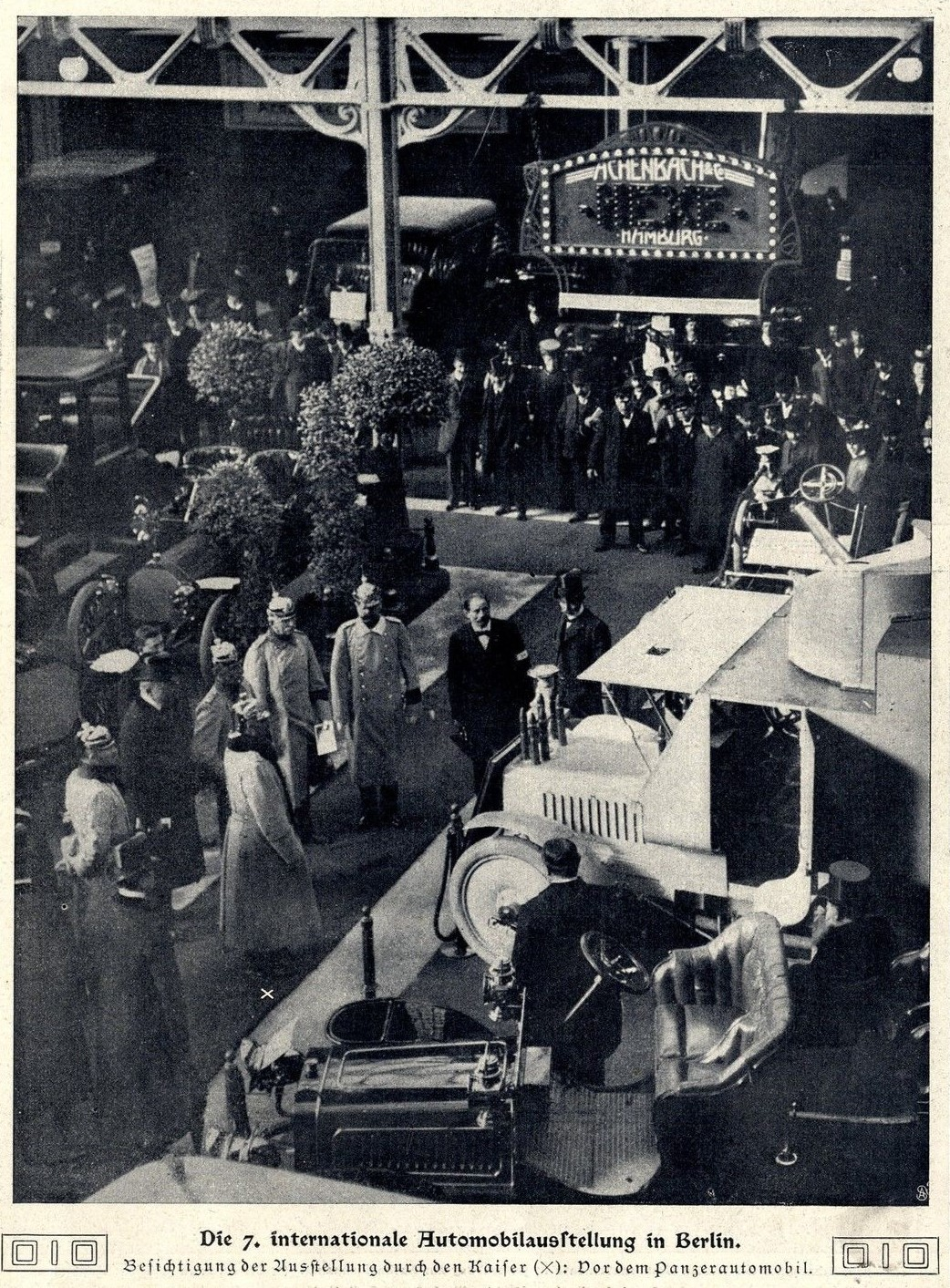 The Ehrhardt being inspected by the German Emperor (x) at the VII. Car Exhibition in Berlin. Note the 5 cm shells standing on top of the engine compartment. Source: Public domain

The Ehrhardt BAK was based upon a conventional chain driven light lorry, with rear wheel drive, the engine in the front, and driver compartment in the middle. The vehicle was protected by 3 mm thick armor all around and louvers were made on the front and sides of the engine for sufficient cooling. The armor thickness was criticized by military experts as they rightfully noted that the armor was too thin to stop enemy fire, and so it was only an unnecessary ballast and waste of precious resources.
The driver’s compartment offered space for the driver on the right and a commander on the left side. Both had one vision slot facing forwards and the complete front armor plate could be folded upwards for better vision but should be closed in case of direct combat. Doors were installed on both sides of the vehicle.
Although no official documentation is known about the color of the vehicle, a visitor of the Exhibition in Berlin notes in a Dutch newspaper that the armored car was grey. On pictures of the Exhibition, the Ehrhardt seems to be painted in a light color which suggests a lighter shade of grey. 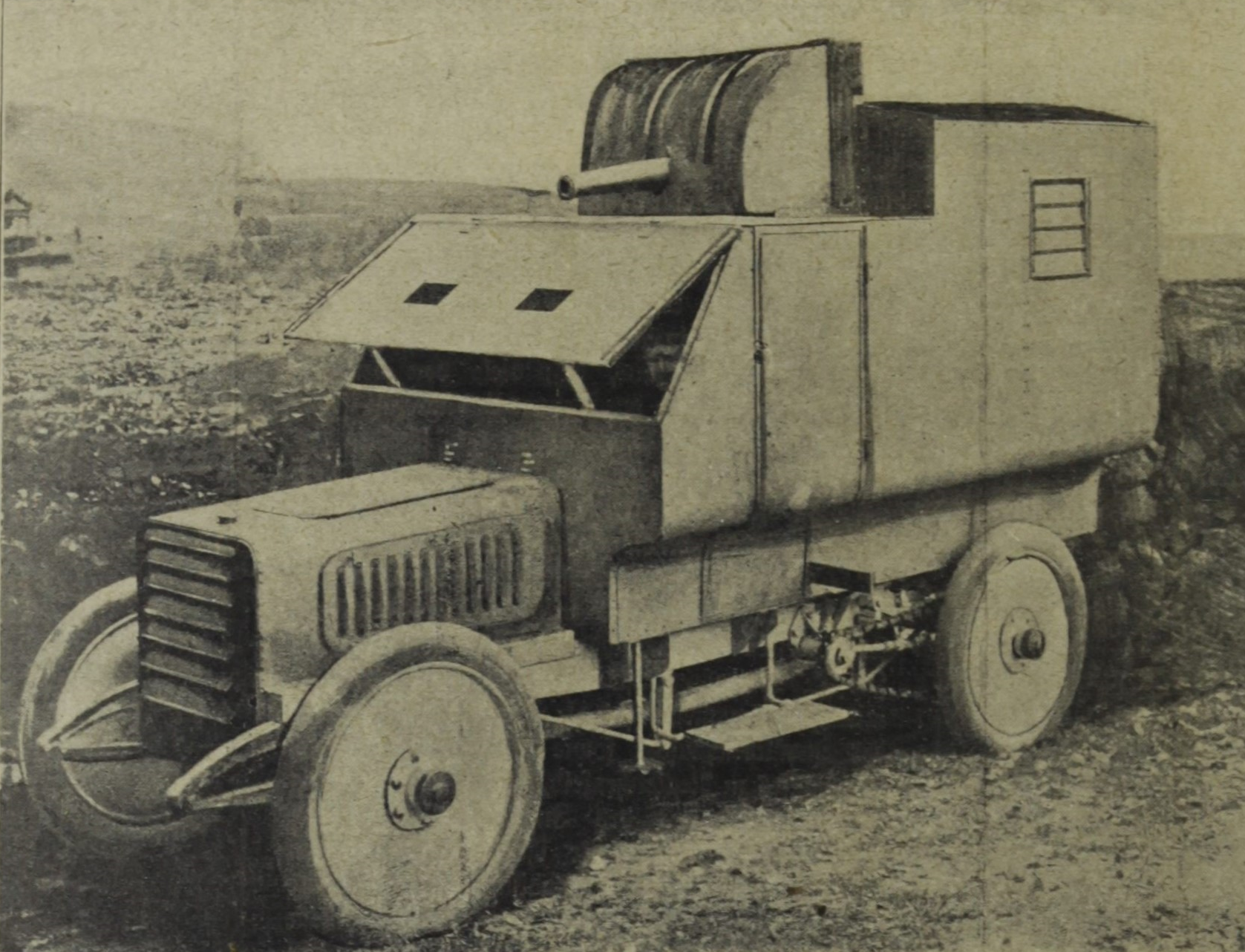 A retouched image showing the vehicle with a half-opened front plate and gun in lowest depression of 5 degrees. Source: Contemporary newspaper 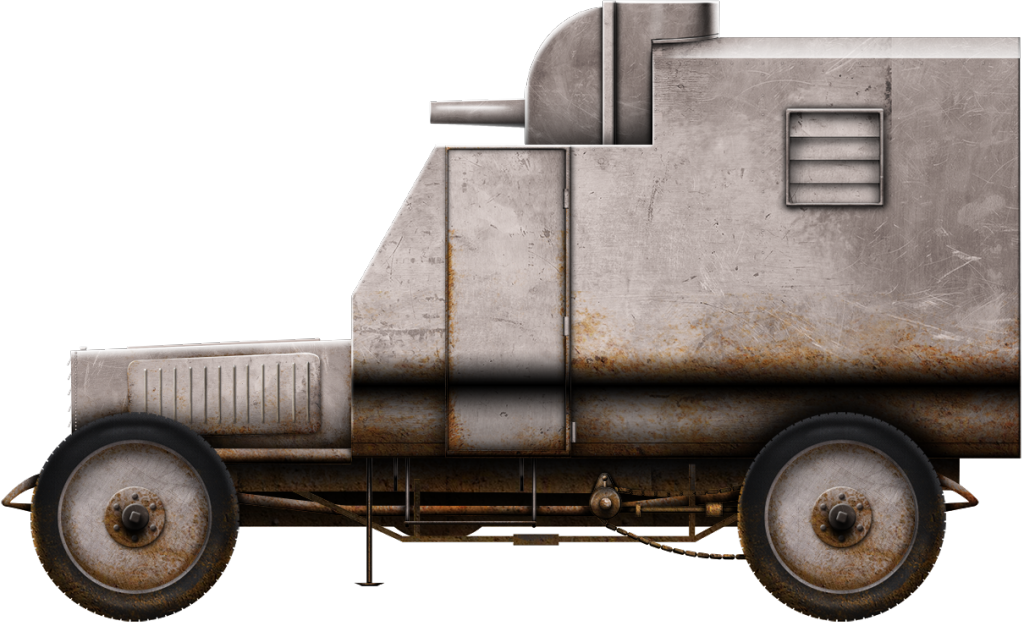 Illustration of the Ehrhardt Ballon Abwehr Kanone, produced by Yuvnashva Sharma, funded by our Patreon campaign.

The vehicle was powered by a 4-cylinder petrol engine, producing 50-60 hp which powered the back wheels by means of a chain-drive. The vehicle, complete with five men crew, fuel, and 100 shells would weigh 3,200 kg. Mobility was sufficient to be able to cross muddy roads and it could take slopes up to 22 degrees (40%). The wheels were shod with solid rubber tires. According to the official specifications, the vehicle could reach a speed of 45 km/h (28 mph) on roads, but this was heavily contested by military officials as they did not believe a vehicle on solid rubber tires could reach that speed without heavily tearing the engine or suspension. 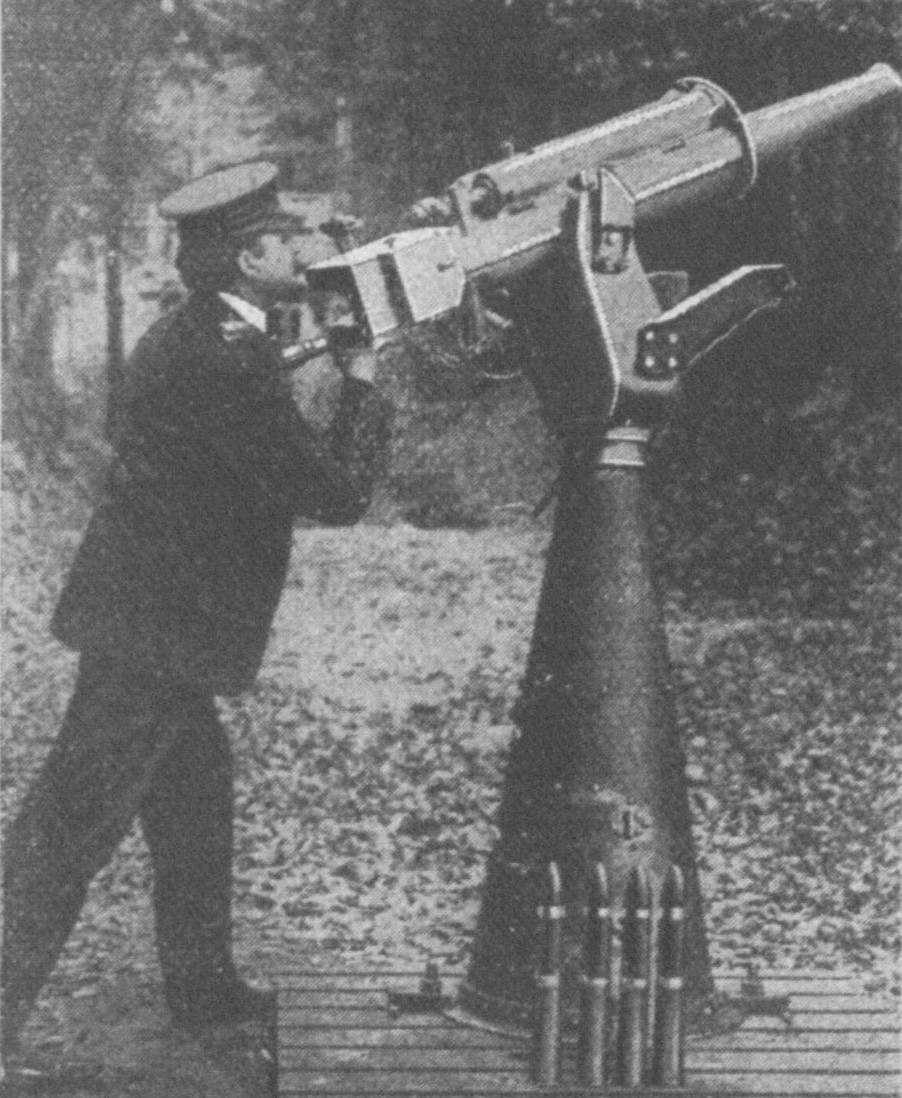 The 5 cm gun which was the main armament of the Ehrhardt BAK. Source: Österreichische Illustrierte Zeitung

The vehicle was armed with one 5 cm Rheinmetall gun which fired shrapnel rounds weighing 2.4 kg at a velocity of 450 m/s. The round contained 40 g bursting charge, 128 hard cast lead bullets of 8 g, and 36 hard cast lead pieces of 9 g. A total of 100 shells could be carried, having a combined weight of 240 kg, which were stored in the back of the vehicle.
The maximum horizontal firing range was 7,800 m with an elevation of 43 degrees. The maximum elevation was 70 degrees which would result in a shooting distance of 3,800 m. The gun could depress 5 degrees and turn 60 degrees, 30 degrees to each side. The limited turning radius was one of the most criticized aspects by contemporary military officials, as it would limit the utility of the vehicle significantly. It would not only reduce the vehicle’s flexibility against air targets but also severely limit the vehicle’s capability to defend itself against close land targets. 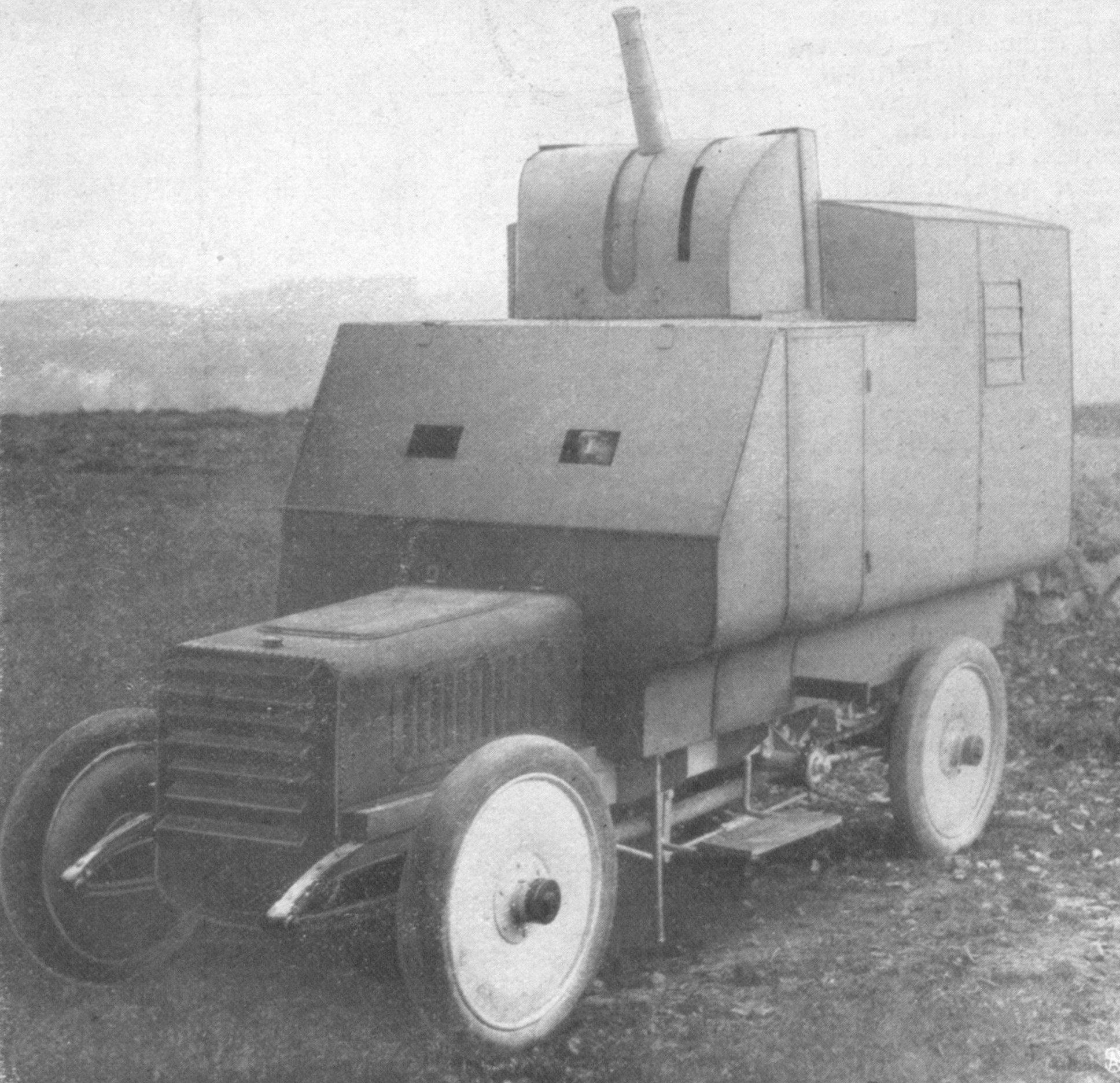 After the vehicle was rejected, Ehrhardt did not give up on the concept. He took the main criticism into account and presented a new vehicle which shared the same chassis, crew layout, and gun, but without the big armored superstructure. Only the lower half remained armored, which meant that weight was reduced, the ‘useless’ armor was done with and the gun now had a much better effective firing range. It was this simpler concept that was further developed during the following years leading up to the First World War. When Ehrhardt presented this vehicle remains a bit unclear, as dates range between 1907 and1909. 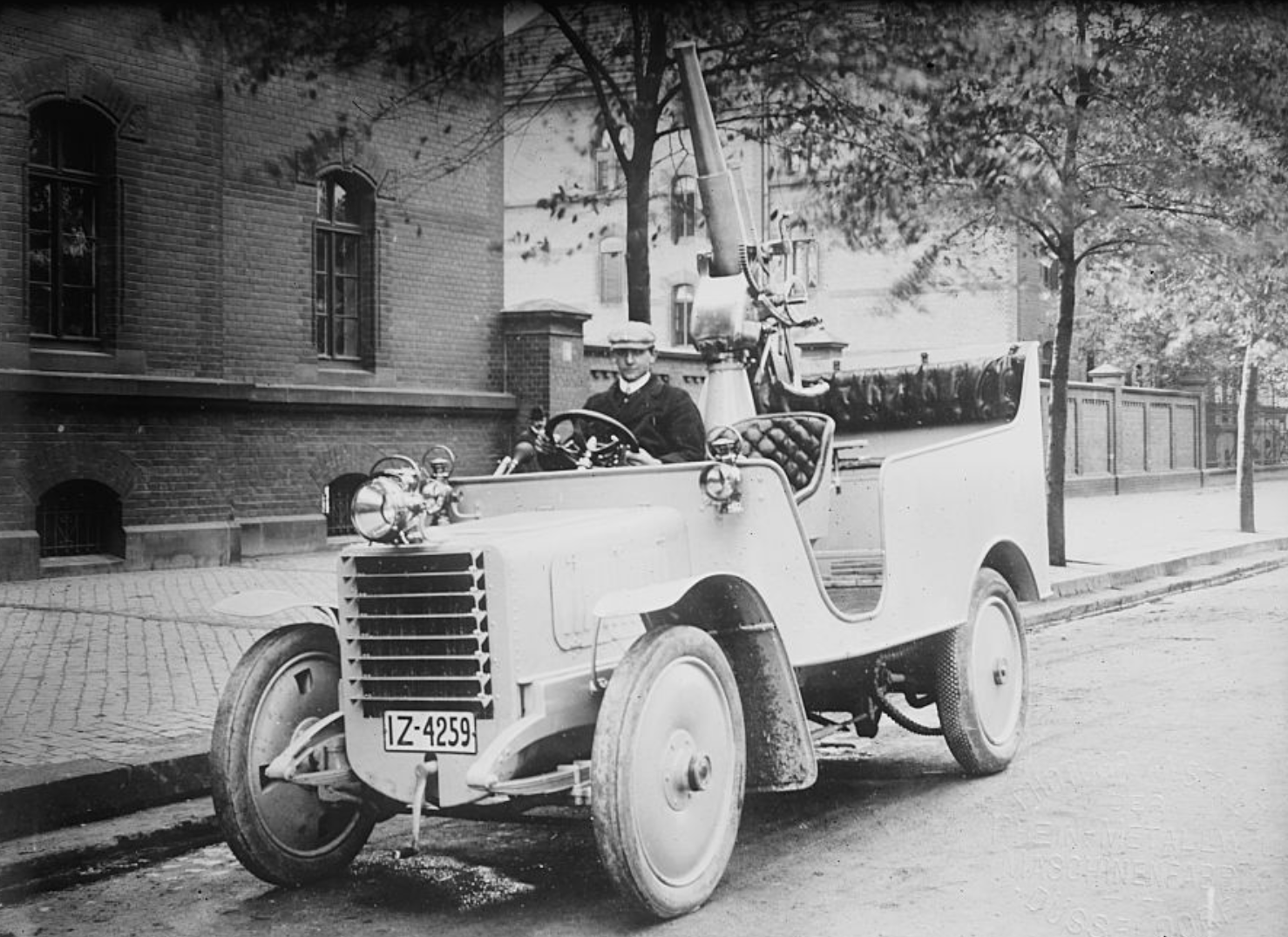 The new vehicle without the armored superstructure. The registration plate (IZ-4259) indicates that the vehicle was registered in the Rhine Province, home of Rheinmetall. Source: Bain Collection

In the end, the Erhardt was both a breakthrough and a failure. The armor was too thin, the effectiveness of the gun was limited, and the vehicle was not mobile enough. Nevertheless, it was an important milestone in armored vehicle development as it fulfilled a role which is still in use today. The vehicle was to be followed by many anti-air vehicles produced in Germany, either armored or unarmored, which were developed before the war and extensively used during the war.