It has been over a century since the guns of WW1 fell silent. A war best known for mostly static trench warfare on the Western Front in France and Belgium as the great Empires of Britain, France, and German slugged out a 4 year-long brutal slaughter. In the immediate aftermath of this war, one of the things done to return to normality for the British was to assign credit to the designers, inventors, and engineers who invented, designed and built many of the key weapons which had led to ultimate victory over Germany. This, of course, included the question over who invented the ‘tank’ and involved dozens of separate claimants to the title. When it was all done, some names, like Tritton, d’Eyncourt, Churchill, and Swinton became very well known for their part. Several men were to receive scant attention and credit for their part in the process and one of them was Robert Macfie. Robert Macfie is a virtually unknown name even to people with an extensive reading or knowledge of armored warfare, yet he fills in a gap in the evolution of tracked warfare at a time before tanks even existed in anything like the form we know them today. A strong advocate for tracked armored vehicles even before the existence of the Landships Committee, Macfie was to design a series of landships for the British war effort, although post-war these were almost completely forgotten.

Born on 11th November 1881 in San Francisco, the American-born son of a sugar baron with financial interests in the Caribbean and Hawaii, Macfie took an interest in military matters outside of the family sugar business. Aged just 17 or 18 years old, he enrolled in the Royal Naval Engineering College, at Davenport, England, studying naval design. After this, he went back to help with the family’s sugar business before settling in Chicago in 1902.

Around this time, he began an interest in aviation and was back in Britain by 1909 building his own aircraft and testing it at Fambridge in Essex. It was during his endeavors in the then-brand-new field of aviation that he met Thomas Hetherington, a man later connected with landships in his own right.

His attempts at getting into the aviation business, however, were not a success. He was back on the family sugar plantations in the years before the outbreak of war and it was there that he became acquainted with the Holt agricultural tractor. When war was declared in August 1914, Macfie and his knowledge of tracked vehicles returned to Britain once more. He immediately sought out his contacts from his aviation days advocating for the use of Holt-based tracked vehicles, advocacy which persuaded him to enlist in the Royal Naval Volunteer Reserve (R.N.V.R.) in October 1914.

With his experience, he was brought to the first meeting of the Landships Committee on 22nd February 1915. That though was his only attendance at the committee. After that, he was sidelined to a project working for the Royal Naval Air Service (R.N.A.S.) on a tracked truck. When that project fell apart, in acrimony with the firm building the vehicle, Macfie was essentially a man without a project. His commission was terminated in December 1915 and his military career was over. Just two weeks after the end of his commission, he filed for a patent innocuously titled ‘Improvements in or relating to Motor-vehicles’. At this time he was still giving his occupation as that of a Mechanical Engineer living at 3 Kingsway, London. The purpose of the design was a completely new style of landship, unlike anything before and the culmination of his work and theorizing into the problems associated with tracked armored vehicles to that point. Specifically, the design was described as an “improved vehicle is particularly suitable for use as an armoured car in warfare”

The 1916 landship from Macfie was mounted on a pair of bogies carrying portable track (or tracks) which was held separate to the body. This allowed the bogies to turn independently of the body of the vehicle, and of each other, in order to facilitate steering and with the front end of the vehicle pivoted on the lead bogie. The bogies could also turn together which would allow for sharper turns. The front bogie was mounted on a pivot along a horizontal beam which allowed it to move in the vertical dimension. This additional degree of movement enabled the lead tracks to remain in contact with the ground even when coming into contact with a steep incline, such as a riverbank or parapet.

Macfie does not mention what sort of track system was to be used, but he was an avowed fan of the Holt system. Prior to the war, he had gained experience of Holt tractors and the drawings he provided are suggestive of this system as well. It could be reasonably expected therefore that any tracklayer system he was considering would be similar to or based upon the Holt system.

The Holt track system was produced in various lengths like this short section but following the same principle. It was slow and prone to allowing the track to drop away from the wheels when unsupported. Nonetheless, it was a very popular system prior to the war and the basis for numerous designs both practical and otherwise. Source: Author’s own

This vertical movement of the lead bogey was controlled by means of a large screw jack attached to a rotating mounting within the front part of the vehicle. Turns of the nut on this screw jack, mounted on the floor of the compartment, pushed more of the vertical threaded screw downwards which pushed down the rear of the front bogey. With the pivot in front of this position, this action served to raise the front of the tracks. Elevation range appears to be in the region of 0 to +45 degrees.

What sounded good in theory was not necessarily practical or possible with the technology and materials of the time though. To add extra complexity, Macfie (a tried Naval engineer) also suggested making the lower part of the body of the vehicle watertight so it would float. Able to traverse open water or rivers, Macfie envisaged the use of a propeller mounted at the back powered from the engine. This was an improvement on his 1915 design, as this propeller was able to be stowed vertically, whereas it was fixed in the ‘down’ position in the 1915 design. 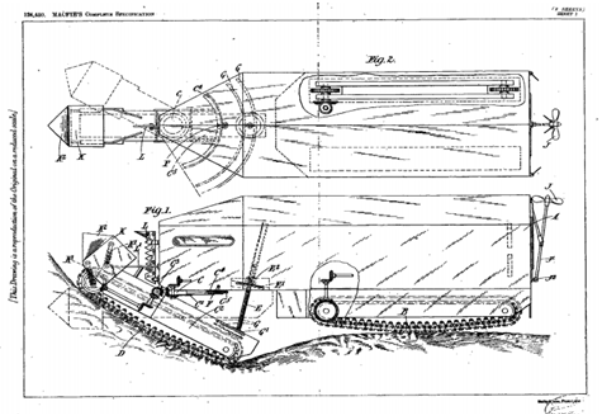 Macfie’s design of January 1916 from the British Patent.

The overall shape of the machine was that of a large box with a pitched roof and pointed front. The sides were flat and vertical topped with an angled roof where the body was over the tracks of the rear bogie. At the front, the roofline dipped down to join the pointed front of the vehicle, forming a wedge shape. In front of the leading edge of the body of the vehicle was a large vertical wire cutter made from overlapping triangular blades. This device was very similar in appearance to that trialed on the Italian Pavesi Autocarro Tagliafili (Pavesi Wire Cutting Machine) and the French Breton-Pretot Wire Cutting Machine, although there is nothing known to suggest a link between any of those designs and this one.

Ahead of the wire cutter, attached to the lead bogey, was an armored box with a pointed face that was adjustable.

When stationary, the landship served the role of a fortification. Within the body of the landship was a large set of shields that could be lowered to cover the rear bogey, and that pointed box at the front of the lead bogey could likewise be lowered. This lowering method for the body and nose was intended to protect the tracks from enemy fire when the vehicle was stationary.

No specific armament was mentioned in Macfie’s 1916 patent application other than allowing for the use of “fire-arms or guns from the interior of the vehicle”. Based on his 1915 design and the prevailing thought of the time, armament was likely limited to a pair of machine guns on each side and a series of loopholes along the sides for troops within to fire from.

No specific crew is mentioned, but a review of the design shows the need for a single driver at the front and at least another in the rear to control the rear bogey. A third man may have been required to operate the wheels controlling the elevation of the lead bogey meaning at least 2 or 3 men would be required to steer the vehicle. With a commander and at least one gunner for each machine gun, that would make a minimum crew of around 7 men with space in the back for maybe 20 or so men.

Macfie’s January 1916 design was amended in April 1916, improving the design in several areas. Firstly, the amendment clarified details of the elevation mechanism for the front bogey making it clear that it could be provided with a locking system to hold it in an elevated position even during steering. The wire cutters which had been drawn in January were explained as well. Macfie was in doubt as to the importance of the machine to be able to cut its way through “barbed wire networks”. Any wire encountered by this vehicle would be guided by the shape of the nose which was drawn as a box with a pointed front but described as either ‘pyramidical’ (square-based pyramid pointing forwards) or conical. Powered by the engine, the blade would then slice through the wire, a significantly better concept for cutting wire than the somewhat feeble attempts considered by the official landships work as demonstrated the summer before-hand at the R.N.A.S. Depot at Barlby Road, which relied on the engine power pushing the vehicle through the wire.

Robert Macfie had failed in his attempts to get the Landships Committee to adopt his original design. He had, however, achieved considerable success in the one Landships Committee meeting he was at. He had convinced them of the benefits of a tracked vehicle, albeit basing his ideas on the Holt chassis at the time. This more adventurous design from 1916 though was not a success. It was significantly more advanced in both what was being envisaged and in technical terms than the first vehicle but, without a direct line of contact to the Committee, this design went nowhere. It is not clear if Macfie even tried to submit this idea to the relevant authorities or not, but it would not have mattered anyway. By the time he submitted his design in January 1916, the famous quasi-rhomboid-shaped British landship had already been settled upon.

Despite the lack of success with this design, Macfie would try once more to design what he felt was a tracked vehicle, but neither of these designs featured in the post-war enquiry into the invention of the tank. Macfie died in New York, USA in 1948.

The foundations and principles of modern armoured warfare did not appear out of a vacuum, and nor did the machines of WW1 and WW2. Their development was full of false starts, failed ideas, and missed opportunities. Robert Macfie was a pioneer in aviation at the turn of the century followed by work with the Landships Committee on tracked vehicles to break the stalemate of trench warfare. Although his tank designs never saw combat the work he started was carried on by other pioneers and helped to usher in a dawn of armoured and mechanised warfare.