It is commonly accepted that the tank was invented by the British in WW1 as a means to break the stalemate of trench warfare. What is not well known is the number of armored vehicles designed and used which predate the appearance of a modern tank.
There were many ideas from ancient times to the medieval period for covered wagons or protected carts, but none of these machines had the fundamental element of a modern fighting vehicle: an engine. One of the first vehicles combining both protection for the crew, offensive weaponry, and an engine was designed not in the early years of the 20th century, but in 1855.
The designers, Messrs. James Cowen (of Greycoat Street, Westminster, London) and James Sweetlong (Earl-Street, Westminster, London) submitted their design requesting a Patent on the 3rd April 1855 under reference number ‘747’.

There are various descriptions of this machine available in both contemporary and more modern sources, all of which hint at what the machine really looked like.

“This invention consists in forming a large land battery, running on wheels and driven by steam. To the framing of the battery and at right angles to its length, are fitted strong and powerful blades turning upon a hinge joint, so as to lie close to the framing when not in use, and to be instantly thrown out when required by the artillery-men or persons inside the battery, ‘the effect being to mow down any troops that come in contact with or near the battery”

“Consists in an armour clad locomotive land battery propelled by steam power. The engine and boilers are placed below the floor of the gun-room, the engine room being in the middle. The vehicle runs on five wheels, the fifth being situated centrally at the front to act as a guiding wheel”

“A massive framing is proposed to be fixed on five broad wheels. Upon this framing ordnance is mounted, and loop-holes may be made in the sides thereof for riflemen. The carriage is to be driven by a steam-engine”

“In 1855 James Cowen took out a patent (No. 747) for a ‘Locomotive Battery for Field of Battle with steam engine.’ It held 14-pdr. Carronades and the framing had strong, powerful blades (scythes), hinged when not in use, to mow down any troops that came in contact with it. The cover was of hardened steel, serrated or formed in sharp angular projections, to shatter any shot that may strike them. This is a direct opposite to the ‘glancing surface’ which was one of the noticeable features of the best defensive armour and is still observed in the helmets of 1915 pattern and the battleship turrets of the Navy. The shape of Cowen’s covering, very similar to that of Leonardo da Vinci’s, was good, and would probably have been more protective if it had been left smooth. Cowen took out several patents for agricultural machines, but does not seem to have taken out any protection for his experimental war-cart”

“In 1855 James Cowan [sic: Cowen], a wealthy philanthropist, took out a patent for a steam-driven ‘locomotive land battery fitted with scythes to mow down infantry.’ It was a four-wheeled armoured vehicle armed with guns, and ‘looked like a huge dish cover on wheels.’ It was rejected by Lord Palmerston as being too brutal for civilized warfare”

‘This invention consists of an improved locomotive battery to be used in the field of battle, and is so constructed as to exert a most destructive force against the enemy, while protected from damage in return”

Just like the descriptions provided by some authors, there have also been various interpretations and artist’s impressions of the machine, and they are reproduced here to examine how so many different interpretations exist and how they came about. 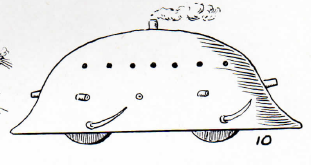 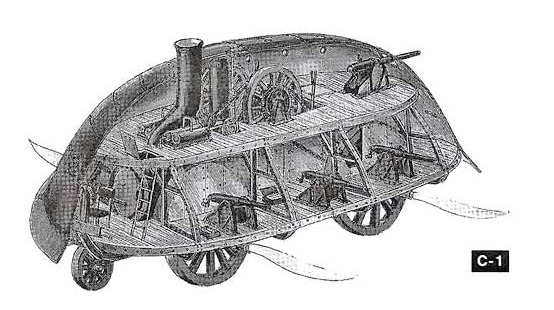 Mostly correct except the guns which are on the wrong deck and the shape of the skirt is wrong. Source: Unknown 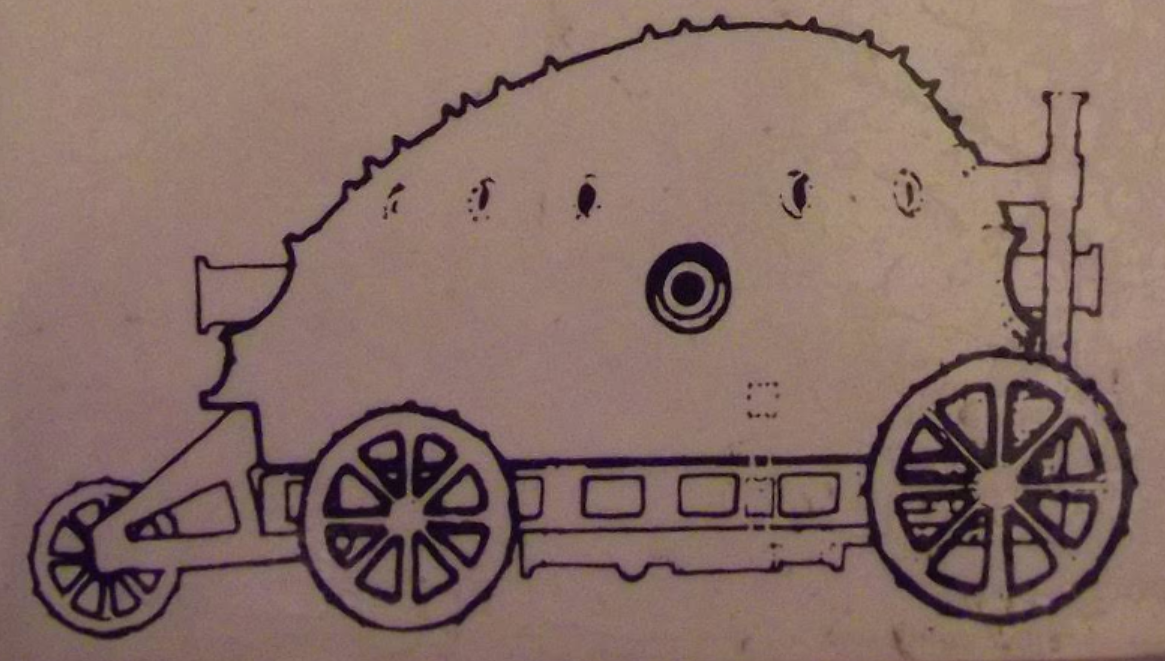 This vision of the machine is clearly drawn only from a description as the spiked surface and fifth wheels are well described but the overall shape is completely wrong. Photo: Voices Prophesying War, 1966 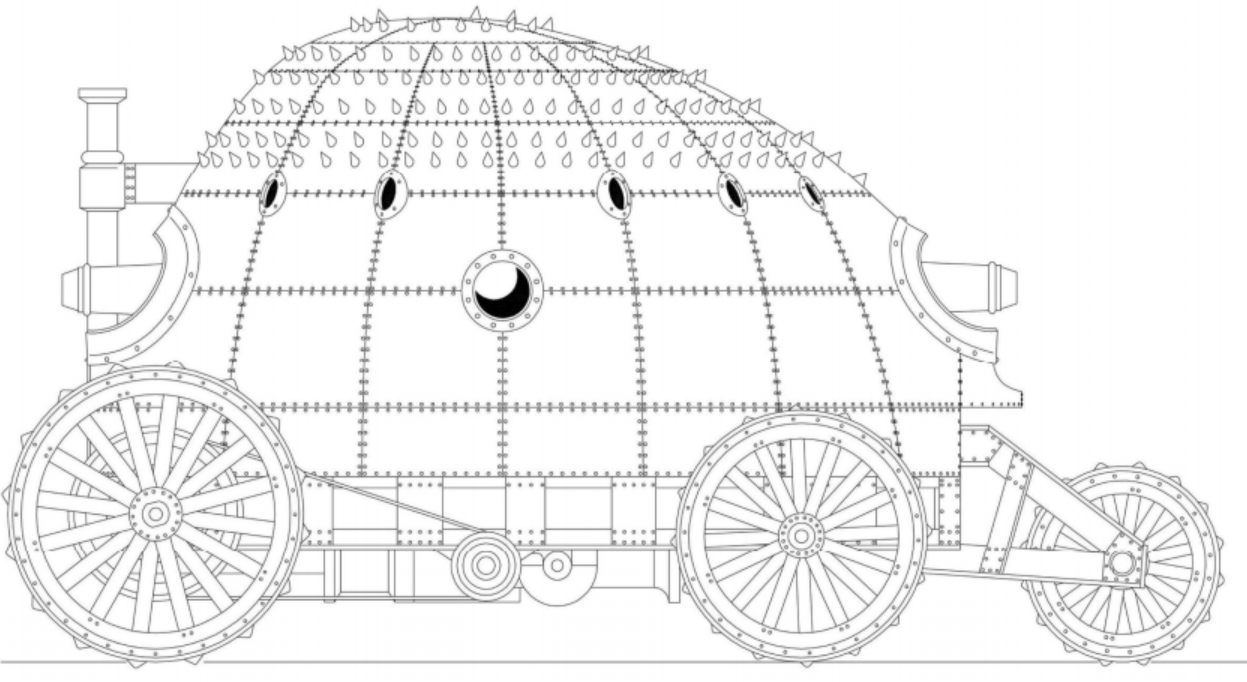 Almost certainly just copied straight from ‘Voices Prophesying War this is a very well drawn vision of the machine but completely wrong. Photo: www.tankinfo.ru, 2012
The real machine, both in looks and description, is somewhat different, however. Apart from the version with the spiky roof, most of the drawings get the rough impression of the machine correctly and some of the descriptions get some or all of the features, but none of them are conclusive or complete. Thankfully, not only has Cowen’s original submission from 1855 been located, but also the poster and letters Cowen sent to Lord Palmerston (British Prime Minister 1855-1858).

In the original patent of April 1855, there is no picture or outline which might account for some of the variance in the images for the vehicle over the years. The vehicle is well described though, consisting of a massive and sturdy framework onto which five broad wheels are mounted, with one positioned centrally at the front of the vehicle to act as a guide wheel. A further note on the wheels is that to “assist the progress of the battery over yielding ground” projections or cogs could be fitted.
The outside of the machine is covered with “stout plates of hardened steel” which have their outer surfaces serrated or shaped to form sharp angular projections from the body which would serve to shatter projectiles hitting the armor. No thickness of armor is specified, but the overall shape of the vehicle’s body is elliptical.
Propulsion for the machine is by means of a steam engine located in a recess in the flooring of the chamber. The boilers for the engine are placed below the flooring of the gun room and along each side of the recess forming the engine room in such a way as to permit easy access.
Armament for the machine was provided by “14lb. carronades , or other suitable sized guns” as well as one or more steam-powered guns using steam from the boilers to propel shot. Further offensive capability is provided by means of multiple port-hole type apertures around the circumference of the gun deck along with small holes for observation. Finally, and most infamously, fitted to the framing and at right angles to it are “strong and powerful blades, turning upon a hinge joint so as to lie close to the framing when not in use” which could be thrown out by riflemen when needed to mow down troops too near to the battery – though there is no mention of them being spring loaded.

In 1862, Cowen submitted more information and the only reliable image of the machine in correspondence to Lord Palmerston. For these letters, he had added some additional information to his 1855 outline providing us with more insight into what he had envisaged 7 years earlier.
The design, according to Cowen, was a “shot and bomb-proof steam engine” able to travel at over 20mp/h [32km/h] and which could be adapted or modified to carry weapons of any calibre or quantity that may be desired. The machine had two levels: an upper platform of the vehicle constructed so as to form a continuous platform of rifled barrels able to fire a ‘sixty ounce bullet’ per minute with the adventurous claim of a range of two miles. Sixty ounces is 3.75 pounds (1.7 kg) which suggests something like a 4-pounder gun with a diameter in the region of 3 to 3.2 inches (76.2-81.3 mm). The Battle Car’s image, as drawn, would show 12 of these guns arranged around the circumference of the machine. Alternatively, this could just be substituted in whole or in part for loopholes for riflemen to fire from.

Cowen’s own rendering of the invention from his submission to Lord Palmerston 1862. Note that the vehicle is seen traveling left to right. Photo: Cumbria Archive Services
The blades on the sides were now knives or swords and described more thoroughly as:

“projecting from the axles of the wheels of the Battery are revolving scythe-shaped knives or swords – which, without the aid of steam armament but combined with the irresistible power of the Ram formed to work in both ways – would effectually annihilate Cavalry, Infantry, and crush batteries of Artillery”

“Jas. Cowen’s Patented Land & Sea Locomotive Steam Ram & Battery. Submitted to Lord Palmerston, the Premier of Great Britain and his colleagues, some of whom, as well as himself highly approved of it in 1854, and by them referred to a select Committee of the most experienced veterans of the age – supposed to be (?) but in reality washed-out Old Women and Senile Old Tabbies at Woolwich, whither I caused the Machine, Models, Plans, & c., to be conveyed.”

The author wishes to acknowledge the assistance of the Archive Services of Cumbria, The Journal of the Society of Army Historical Research, and Intellectual Property Office (UK) for their assistance in finding the missing paperwork from Cowen and Sweetlong without whom this article would not have been possible.

A rendition of the ‘Land Battery’ or ‘Devastator’ based on Cowen’s own drawing from 1862. Illustrated by Jaycee ‘AmazingAce’ Davis, funded by Fred Oliver through our Patreon campaign.