The basis for this vehicle, like so many other early attempts at armored vehicles, was a commercial chassis. Whereas other designs used tractors or armored cars, this machine, designed by Monsieur Paul Frot, used a road roller. The machine, therefore, is not a tank or armored car, but an armored road-roller.

Why a road-roller? Well, going back to the problems of the war, it was the barbed wire which caused the greatest headaches. Troops were exposed to withering machine gun because the belts of wire made movement slow and exposed them to it. Remove the wire and the troops could get to the enemy and fight. The design of Monsieur Boirault had sought to simply flatten and crush its way through these wire belts. Other designs were about progressively cutting a path through the wire, but Monsieur Frot and Monsieur Turmel were simply going to crush it down and roll it into the mud. In this regard, their ideas were very similar to those of Winston Churchill and Maurice Hankey at around this same time, who planned to use rollers to crush down wire and the pickets holding them up, a plan which was shown to be wholly impractical and was not pursued. The French, however, were more adventurous and willing to try it, and thus, the product of M. Frot and Turmel based on a Laffly roller was born.

The Laffly road roller was a modern vehicle with a petrol engine which had been patented in 1909.

An artists interpritation of the Frot-Turmel-Laffly Armoured Road Roller

The design work on the vehicle started in December 1914 with the engineer Paul Frot at Compagnie Nationale du Nord (Northern Railway Company), although the idea for it may have been around as early as November that year. Frot wrote to the Ministry of War with his idea describing it in wildly optimistic terms as “a redoubtable war machine which from the moment it appears will strike terror in the ranks of the enemy”.
The proposal was simple – take an existing chassis of a heavy vehicle, in this case, a road roller, and turn it into an armored vehicle by covering it in armor. It was as simple as that, no armor underneath, the front roller would simply go over and pulverize the stakes holding up the wire and the armored body would protect the vehicle. Cladding the vehicle in armor was a simple process making the front and rear of the vehicle steeply angled so as not to get caught on obstacles. At the front, a curved face to the tank contained the only forward-firing weapon, a single machine gun. More weapons would be fitted too, with two more machine guns in this frontal portion to cover the sides with limited traverse. At the sides of the road roller, the armored hull swelled outwards to allow for some extra width so another machine gun could be mounted on each side. The rear matched the front with machine guns at the sides and one more at the rear too. A grand total of eight machine guns.
In the central section of the machine, the sides swelled out with angled plates and on these angled sections were large rectangular access doors, although the quality of photographs and drawings from the time do not make clear if there were two doors per side or just one, or if, indeed, both sides even had doors. Logically though, any doors would have been on the reverse face of these side sections to afford some protection for the door from the direction of enemy fire as a large door opening towards the enemy is generally not a good idea. Various other loopholes are shown in many contemporary images, although some have clearly been heavily touched up. Some were altered to show not a machine gun in the sides but a cannon instead, but the photos which have not been retouched do not show this. Inside the vehicle, platforms would be required in order for the troops manning the weapons to stand on, and despite the somewhat impractical nature of the idea, it was given approval by the Minister for War to go ahead. 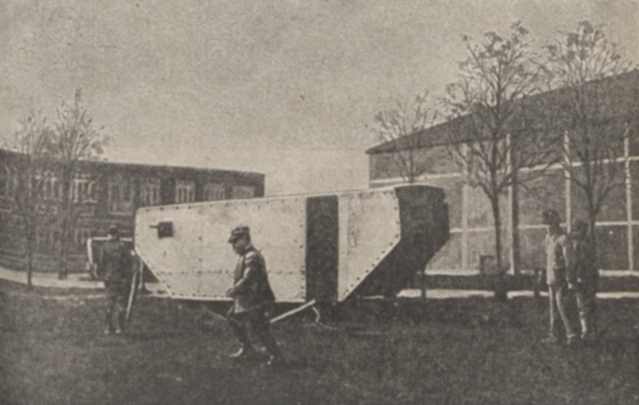 Frot-Laffly armored steamroller undergoing tests April 1915. Only one machine gun can be seen, mounted in the front on the side, suggesting that the other side armament in contemporary images was added later. Source: Granier

Another image of the Frot-Laffly armored road roller showing numerous weapons and portholes not seen in the vehicle as it appears in photographs and showing 4 equally sized wheels whereas a road roller actually has only the two wheels at the back and the roller at the front. Source: Plonquet
With potentially up to eight machine guns, the crew for this vehicle would have been large, probably 10 men based on 8 gunners, a driver, and a commander. If the un-retouched photo is correct, then the three machine guns in the nose would have brought the crew down to just 5 or so, still a lot of men to fit in a small space alongside a hot engine in the middle. The vehicle, despite its size at 7 meters long, 2 meters wide, and 2.3 meters high, was surprisingly light being described at just 10 tonnes, but this does not make sense.
In 1910, for example, Laffly were offering their latest petrol-engined rollers which ranged from 5 ½ tonnes to 9 tonnes with engines ranging from 12 to 15hp, so it is reasonable to assume that a 20 hp model was more than 9 tonnes as a plain road roller before any ideas of an armored body. Given that the majority of sources give the weight of the machine as 10 tonnes, it can be assumed that the ‘10 tonnes’ is not, in fact, the complete weight with armor, but actually just the weight of the roller without armor.
Regardless of its weight though, the problem was the wheels. The rear wheels were covered in rubber for extra traction and, whilst the machine could move adequately along a hard road or paved surface, it was a road roller still. Even without the additional burden of the armor, such a machine should have been obviously impractical for travel across soft muddy ground, the sort of battlefield conditions where even horses and men could get stuck was not the place for a vehicle with all of the disadvantages of an armored car – a class of vehicle already understood to have serious off-road limitations.
On 26th January 1915, M. Frot wrote once more about the machine describing how it was supposed to work “not only in order to knock over, flatten and sever the barbed wire entanglements, but also and especially to turn it into an offensive machine of the first rank”.

Illustration of the Frot-Turmel-Laffly Armoured Road Roller, produced by Yuvnashva Sharma, funded by our Patreon Campaign.

Once built, this ridiculous machine was tested in the grounds of the Corpet and Louvet Factory at La Courneuve, North of Paris, on 28th March 1915 and performed extremely well. The ground was hard and to the shock of no one, this giant road roller easily crushed the steel pickets and wire entanglements in front of it but this was tested under ideal conditions. No enemy fire, no soft ground, ditches, trenches, or obstacles to cross. At this point, the military authorities finally saw sense and dumped the idea as the machine was clearly impractical for the conditions at the front. It should never have gone as far as it did, but perhaps in the eagerness to test new ideas with the war raging, the French can be forgiven for this extravagance. It showed that wire entanglements could be crushed and mechanized vehicles could do the job. Wire did not have to be cut to be rendered useless for infantry attacks and importantly, vehicles based on commercial equipment like this road roller were not what was needed. Tracks, not wheels or rollers, were going to be the form of traction for this modern war.
Presumably, following the abandonment, the vehicle was dismantled and the Laffly roller returned to its original duties, ending one of the least realistic ideas to have seen the light of day in WW1.

Frot-Turmel-Laffly armored roller during testing in March 1915 at the Carpet and Louvet Factory. The background has been deliberately altered to hide the buildings in the background, presumably for secrecy reasons. Source: Vauvallier

Where is gone guns on illustration and second door in hull?

Hello Mendur!
While there are many representations showing various features of the Frot-Turmel-Laffly, we chose to illustrate the built variant that can be seen in only two photos and which does not seem to have a second door or any extra guns.

So wait, this thing is essentially, from what I understand, the world’s first armored engineering vehicle considering how it seems to be specially designed for rolling out barbed wire

Well, kind of, although almost all AFVs of the period were mainly designed to crush barbed wire and pass over trenches.

With all due respect, you all have done one helluva job
Look this is great and all but shouldn’t you all be working on other things
The T10, Tunguska, T28 (super heavy tank), MBT 70,p 1500, Karl gerat and many more lack articles
I’d rather read about those than some steam roller from WWI or the humvee prototypes or a specific A7V (not the vehicle in general but a specific one mind you)
Get your priorities straight

Dude, we’re a bunch of guys who are writing articles in their spare time and publishing them for free online. We get to decide our own priorities. I do understand that you’d like to see certain articles getting published, but I honestly find your whole comment incredibly rude.

I’d agree with you on that Stan. It is rude. And honestly at least half those tanks have a little snippet of an article somewhere on the site. Not to mention all of them have been wonderfully illustrated by David.

Not only what Stan said, but some those article topic are incredibly daunting. MBT-70, for example, would be an enormous article. We already have enough articles on mainstream vehicles waiting to be published anyways.

Oh gosh yes. The amount of features alone on the MBT-70 would probably be at least a column’s worth of info