It was not long into World War One before the dynamic movement of armies ground to a halt as both sides dug in for a war which was to become synonymous with slaughter. The greatest factors in producing this stalemate, a situation which remained virtually unchanged on the Western Front between 1914 and 1918, was the modernization of weaponry which took place at the end of the 19th Century. The modern machine gun and artillery, combined with thick belts of barbed wire, meant that neither side’s infantry could cross no man’s land without incurring horrendous casualties or hold onto territory they gained across the wire.
A new type of weapon was being born out of the simple necessity to beat the effects of the wire on the troops and, whilst this would eventually result in the tank, there were numerous steps and missteps in the evolution towards that weapon.

The French were pioneers in armored warfare and had armored cars before the start of what would be World War I. These cars were basically commercial motor vehicles onto which a little armor (mostly bulletproof) was added. These were well suited for patrolling what roads there were but wholly unsuited to even moderately wet or boggy ground, let alone ground covered with wire entanglements. Tractors, on the other hand, were still wheeled but were well known as being able to cross muddy fields by virtue of the large wheels spreading the weight of the vehicle. It is no surprise therefore that the French, in the early era of developing armored vehicles, sought to use tractors for a variety of purposes.
The tractor building firm of Georges Filtz produced agricultural equipment before the war and, in January 1915, Filtz’s ideas about using his tractors were taken by General Curmer to General Joffre. These ideas basically revolved around using an existing, tried and proven vehicle, cheaply fitted with armor to crush its way through the wire. The idea had significant appeal to Joffre and was approved for tests.

Believed to be the original Filtz armored tractor, this vehicle retains the open web tractor wheels, a different position of view slits, and no vision flaps other than at the front. The roof hatch also lacks the triangular section to hold it open at an angle. Source: Chars Francis via the Vauvillier and Danjou collections

Construction of the machine was undertaken by the Technical Engineering Section (STG) and involved reversing the tractor. The large diameter rear wheels would become the front wheels and, accordingly, the small pair of front wheels would become the rear wheels. This kept the engine at the front, where it was protected by a square-shaped steel bonnet followed by a fighting compartment made from a much larger box shape of steel sat at the back, where there was enough room to stand. Initially, the vehicle retained its open web type steel wheels at the front and back. Later, these would be covered over with steel covers hiding the spokes. 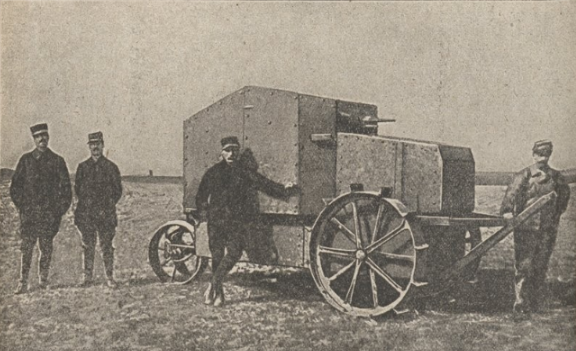 Believed to be the first Filtz armored tractor, this retouched image still shows the open web wheels. Note: a ‘mirrored version of this IMAGE has also appeared in print later but this is believed to be the original facing left to right. Source: Granier
The main cab, made from 10 flat panels of bulletproof steel up to 12mm thick, was riveted to a steel frame and surmounted by a slightly angled roof at the front, which then descended steeply as the bodyline tapered towards the rear. At the rear, over the pair of solid wheels which had been fitted with a circumferential solid rubber tire, was a rectangular door. This door served as the only access to and from the vehicle. A single flap inside the door served for ventilation and also seeing backward. Two vision slits were provided in each side of the cab, at the back and two more, fitted with armored flaps, were fitted on the corners of the front. The flat front of the cab had a single light machine gun, mounted centrally, flanked by two horizontal rectangular visions ports, each with its own protective flap.

No proper roof hatch or periscopes were fitted, meaning all visibility had to be done ‘buttoned up’ via these slots. The only roof access was by means of an unusual square flap in the back, over the door. Folded back, it would remain at an angle of about 45 degrees to the horizontal, unable to go flat due to a small triangular section between the hinges. This triangular section held up the hatch meaning that one man, and it can be speculated that this was for the commander, to sit out of the roof to get a better view ahead. Although this would be suicidal in combat, it would be useful behind the lines and also provide a lot of ventilation into the stuffy compartment. 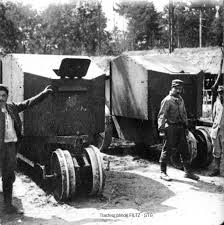 The unusual roof hatch at the back open (left) and closed (right). Note the chain steering system connected to the rear wheels as well. Source: Chars Francais

The engine remained unchanged from the standard 45hp and was protected under an armored box with a simple overlapping set of horizontal panels at the front to protect the radiator. There are no apparent ventilation grilles on the vehicle, suggesting that air for the engine was simply drawn in from underneath the bonnet. The position of the exhaust is unclear but presumably was underneath. Steering was done by means of chains running from the front of the cab, underneath the cab and to the small wheels at the back.
At the back end of the sides of the engine armor, there were two doors, each of which allowed for access to the mechanicals of the vehicle. A flat rectangular plate hung down from the front, under the radiator armor and allowed for the fitting of an angled steel picket to be fitted which was intended to force barbed wire down underneath the vehicle or snap. 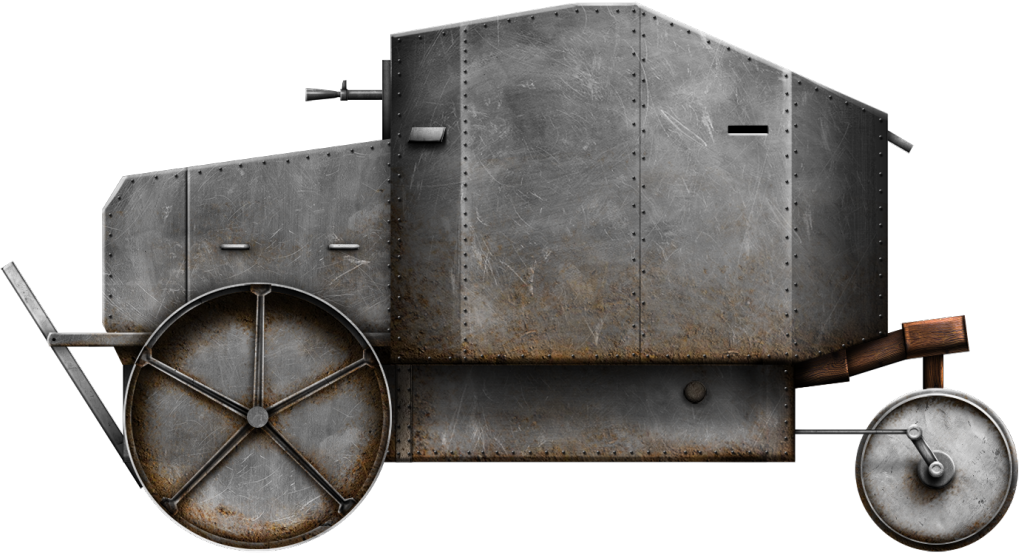 Illustration of the Filtz Armored Tractor, produced by Yuvnashva Sharma, funded by our Patreon Campaign.

The finished Filtz armored tractor was ready for presentation in February 1915 and an order for 10 vehicles was placed the following month, to be ready by summer. By the summer of 1915, other better ideas had emerged for breaching enemy wire, using tracked machines rather than wheeled machines or repurposed agricultural equipment. The 10 vehicles ordered were duly delivered by July 1915, but tests of them showed the importance of the work on tracked vehicles. 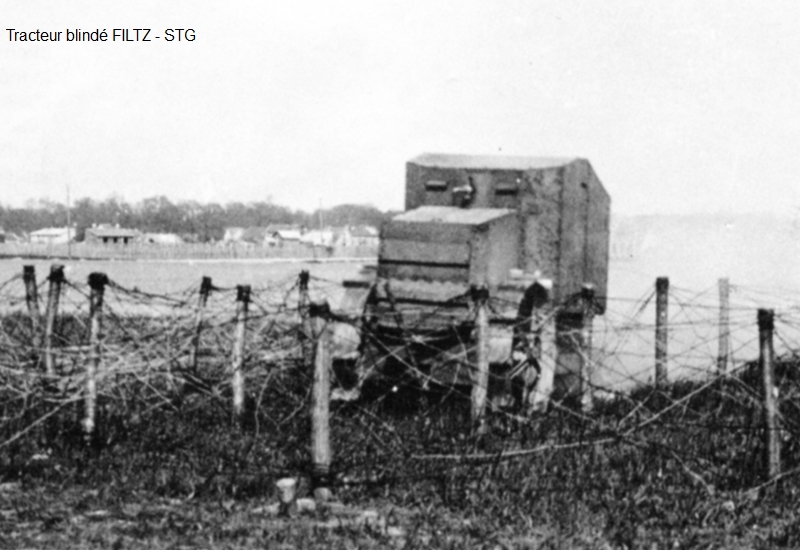 Filtz tractor with a machine gun fitted undergoing tests through a barbed-wire entanglement. Source: Chars Francais
Despite showing some potential, these Filtz tractors proved hopeless. The large wheels were still unable to provide enough traction in soft mud, especially with the added weight of the armor and obviously could not cross trenches or shell craters without getting stuck. They could crush down wire well though, as long as it was tight enough to cause it to snap, a loose wire would simply foul on the machine. 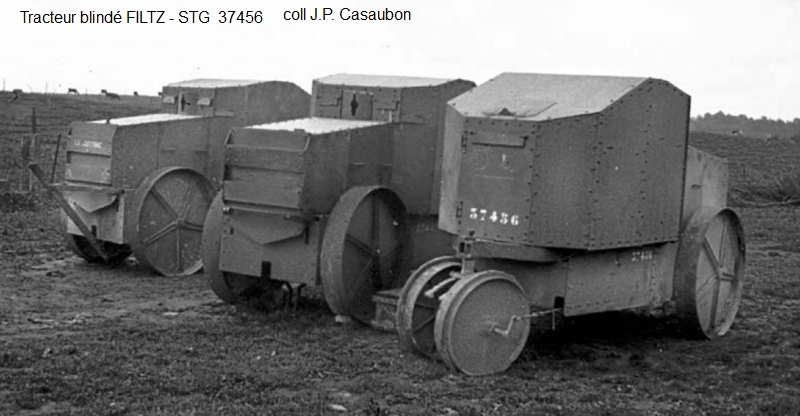 A group of three Filtz tractors, one facing away from the camera. No weapons can be seen and one displays the registration number 37456. The vehicle further from the camera shows the name ‘JOFTRINE’. Note that the middle vehicle is also lacking the wire-crushing bar under the radiator. Source: Chars Francis via Casaubon collection

Despite having proven somewhat hopeless for the role for which they were designed, nonetheless, the machines found use. In August that year, despite their failing, in the absence of alternative vehicles, they were issued to the French 4th and 10th Armies for use in combat in the region of Verdun. Attempts to use them in combat, however, were fruitless. They were unable to cross the terrain without getting stuck and were withdrawn to work behind the lines without having fired a shot in anger.

Behind the lines, these vehicles found use hauling supplies and unditching other vehicles which had got stuck, but they never saw combat and were eventually scrapped. On a hard surface, they proved adequate, able to maintain speeds of up to 7 to 9 mph (11.3 to 14.5 km/h) in either direction but were, therefore, worse than a normal armored car. Off-road, they were worse than a tracked vehicle, and thus, the Filtz tractors, a promising idea to begin with, proved inadequate, just another small misstep on the road to effective armored fighting vehicles for the French Army. 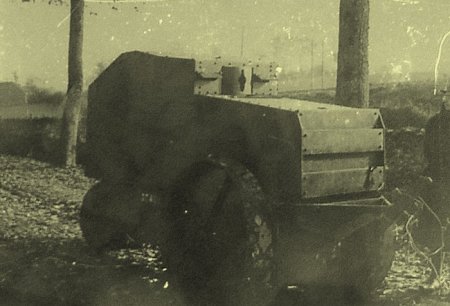 A Filtz tractor in use behind the lines providing a good view of the front of the cab and radiator. The wire-crushing bar is still fitted. Source: unknown

One reply on “Filtz Armored Tractor”

This website uses cookies to improve your experience while you navigate through the website. Out of these cookies, the cookies that are categorized as necessary are stored on your browser as they are essential for the working of basic functionalities of the website. We also use third-party cookies that help us analyze and understand how you use this website. These cookies will be stored in your browser only with your consent. You also have the option to opt-out of these cookies. But opting out of some of these cookies may have an effect on your browsing experience.
Necessary Always Enabled
Necessary cookies are absolutely essential for the website to function properly. This category only includes cookies that ensures basic functionalities and security features of the website. These cookies do not store any personal information.
Non-necessary
Any cookies that may not be particularly necessary for the website to function and is used specifically to collect user personal data via analytics, ads, other embedded contents are termed as non-necessary cookies. It is mandatory to procure user consent prior to running these cookies on your website.
SAVE & ACCEPT
20 shares