Magnets in the Pacific

Of the major combatants of WW2, only Germany and Japan made any significant use of magnetic anti-tank charges. The Japanese in particular had been making good use of the Model 99 Turtle mine and had inflicted many casualties upon American and Commonwealth troops with them.
From Japan, the Model 99 Turtle mine was the shape of a large tin of shoe polish and held in place by means of four equally spaced magnets around the outside and weighed just over 1.2kg, containing 0.74kg of TNT. Placed against thin points of armor or on a hatch, this mine could penetrate 20mm of steel plate, but with one on top of another this could be increased to 30mm.

Japanese Model 99 Turtle Mine
These Japanese mines had been causing casualties for a long time and field extemporised measures, such as the use of piercing aluminium planking were fielded as early as the end of 1943. As aluminium is non-magnetic, the idea was that the mines would hopefully just fall off, and obviously holding the mine further from the vehicle would also reduce their effectiveness.

Little work though had been done on an official solution to the problem of these mines until experiments were conducted between the 2nd September 1944 and the 28th March 1945.
One method tested was the use of steel spikes welded to a 1/2 inch (12.7 mm) thick mild steel plate over horizontal surfaces on a M3A3 tank. These spikes were between 6 3/4 inches (171.45 mm) and 5 1/8 inches (130.18 mm) long in rows 4 1/2 inches (114.3 mm) apart. Another sheet of 1/4 thick (6.35 mm) steel installed around the turret and the covering for the air intake was coated with Truscon 260, a type of cement. This cement coating was found to cause the Japanese magnetic mines to slide off onto the spikes. These vertical spikes would hold the mine sufficiently off the armor that the explosion would be ineffective, and no doubt the ability to deter unwanted enemy troops climbing on the tank was not lost on the experimenters either.
The experiments were however discontinued as it was found to be impossible to protect all of the horizontal surfaces. The measures also interfered with the vision from the vehicle, and the weight of the additional protection was considered to be excessive. 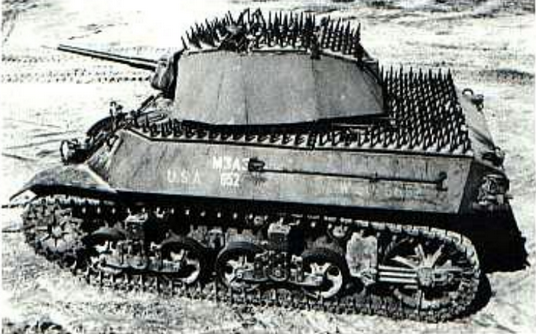 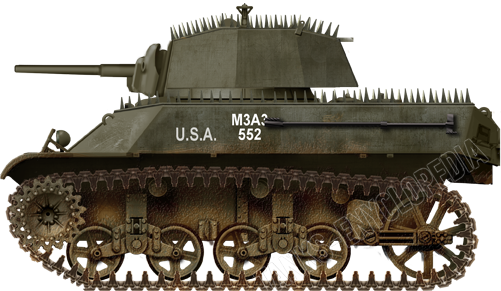 While this M3A3 Stuart looks menacing with its spikes, it was not a viable solution. 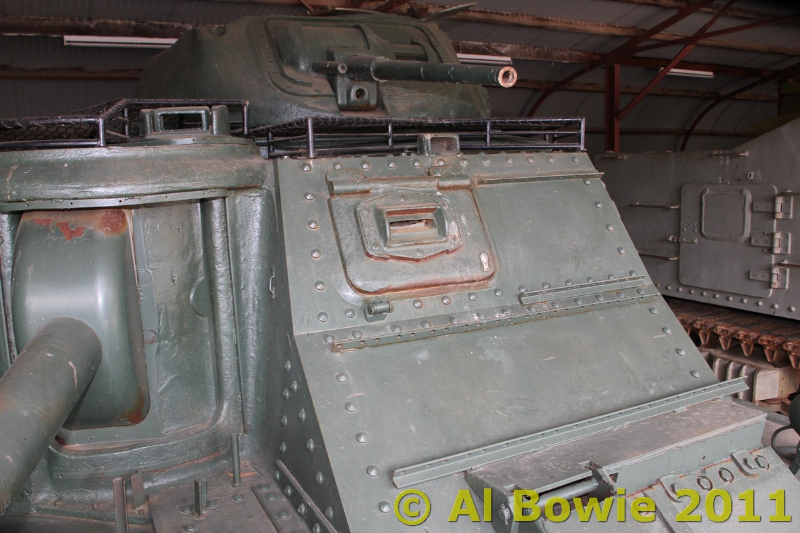 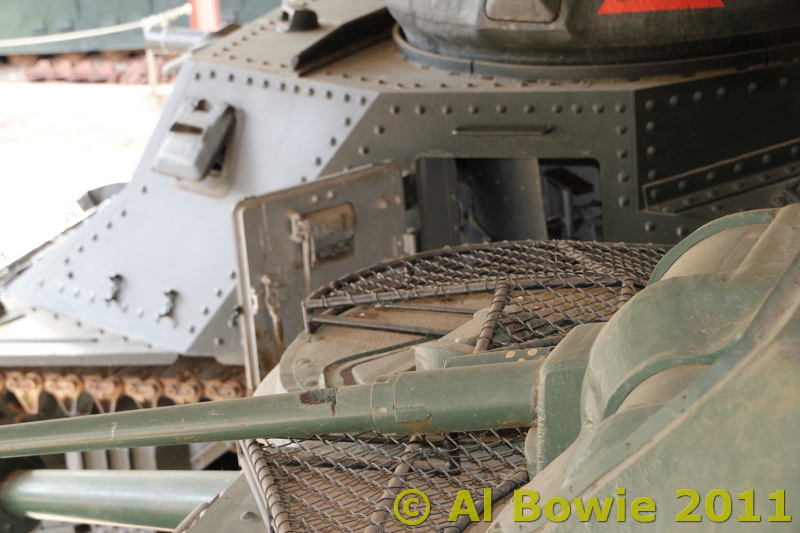 Australian M3 at Australian Cavalry Museum, Puckapunyal with anti-magnetic mine screen fitted over front.Even though US studies ended in March 1945, field extemporised measures had continued with the use of canvas and/or other ‘neutral materials’ being used in some manner to clad at least one US tank in the Pacific theatre by an unnamed unit where it was proven successful in preventing a magnetic mine from adhering. Other measures deployed were welded mesh gratings fitted over the hatches as a method used by both Australian and US forces. The hatches being a particularly vulnerable spot for these mines to prove effective. An August 1945 report documented the efficiency of these mines recorded that in a single engagement in Burma, six US M3A3 light tanks had been attacked with these charges with them being thrown onto the engine compartment or turret, of which five of the vehicles had caught fire. 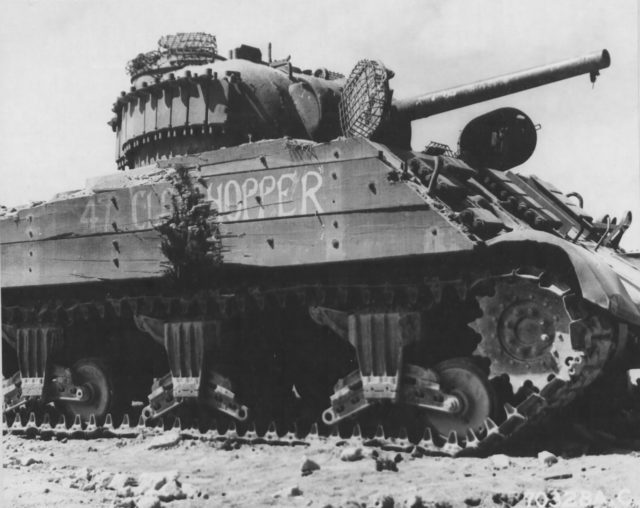 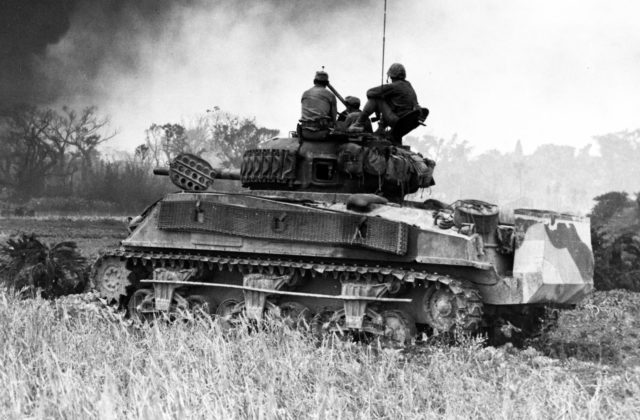 M4 Sherman on 1st Marine Tank Battalion on Okinawa 1945 showing how the aluminium matting could be used to stop magnetic mines from sticking to the hatch. This vehicles also appears to have fabric matting suspended from the sides possibly for the same purpose.
An article by Andrew Hills

One reply on “US work on anti-magnetic coatings”

It should be noted that aluminum planking was hard to come by, the material being on the critical list
“The M9 mat, made from aluminum, was produced to allow easier transportation by aircraft, since it weighed about two-thirds as much. Aluminum plank was referred to as PAP, for perforated aluminum planking,[2] but was and is not as common. Aluminum was a controlled strategic material during World War II, so much less was made; it was typically only able to handle half as many loading cycles as steel, and its high scrap value and short usable life led to recycling rather than reuse. ” – Wikipedia (Marston Matting)
So I’m not so sure the flyboys would willingly share their PAP with the tankers….perhaps some midnight requisitioning was in order !