In 1938, the Japanese military began looking for a replacement for the ageing Type 95 Ha-Go light tank. High ranking members of the military had a preference for more lightly armored infantry support vehicles. As such, two medium tank projects were put forward, with specific guidelines set.

These were: a maximum weight 10 tonne, 20mm maximum armour thickness, 3 man crew, maximum speed 27 km/h (17 mph), trench crossing capability of 2200 mm upgraded to 2400mm with a ditching tail and armament consisting of a 57 mm gun and one machine gun.

Under the working name of Medium Tank Project Plan 2, The Type 97 Chi-Ni (試製中戦車 チニ Shisei-chū-sensha chini) was submitted by Osaka Army Arsenal. It was a low cost alternative to its competition, the Type 97 Chi-Ha, made by Mitsubishi Heavy Industries.

The Chi-Ni was envisioned as a smaller, lighter alternative to the Chi-Ha, and was easier and cheaper to produce. The prototype was completed early 1937, taking part in trials against the Chi-Ha soon after.

It featured a number of cost-cutting features. It was of mostly welded construction, Its drive wheels, idler wheels and tracks were the same as those used on the Type 95 Ha-Go. For a time it was tested with the Ha-Go’s suspension, but it was soon apparent that it did not support the longer chassis well enough.

The hull was designed with a streamlined silhouette to protect from shell damage, and was of a monocoque design. Also known as structural skin, monocoque is a French word meaning “single hull” and is a structural system where loads are supported through an object’s outer layers.

This method is also used on some early aircraft and in boat building. Because of this, the tank was mainly of a welded construction, an unusual design choice for Japanese tanks of the era, which were mostly riveted onto a skeletal framework. The rear of the hull also featured the somewhat archaic feature of a ditching or “tadpole tail” to help it cross trenches. This was a removable feature.

Though the armor was only 20mm thick, it was extremely well-angled. The driver’s position was encased in a semi-hexagonal box; in front of this was the flat bow, leading to a negatively angled lower glacis.

The main armament consisted of the Type 97 57mm. Its primary ammunition was HE (High-Explosive) shells and HEAT (High-Explosive Anti-Tank) rounds. This was the same gun as found on the initial models of the Chi-Ha. The gun kept the Japanese tradition of excellent depression. In the Chi-Ni’s case, this was negative 15 degrees over the front and left side. Depression over the right and engine deck would have have been slightly limited by at least 5 degrees.

The depression suited the tank’s infantry support role because it was able to fire High Explosive shells at close range on advancing enemy infantry, or down into occupied trenches. Furthermore, like the Chi-Ha, the Chi-Ni’s turret ring was made as large as possible, to allow for any future turret upgrades.

The tank shared a similar bell crank suspension to the Ha-Go – this being a near constant of Japanese tank designs of the epoch. The difference was that in the case of the Chi-Ni, at the end of each bogie were 2 small road wheels, making 8 per side.

The forward-mounted drive wheels were powered by a Mitsubishi 135 hp diesel engine that would propel the vehicle to a blistering 27 km/h (17 mph). It was also tested with the 120 hp Mitsubishi A6120VDe air-cooled diesel engine from a Type 95 Ha-Go.

The Chi-Ni was a 3 man vehicle, compared to the 4 of the Chi-Ha. The commander of the vehicle was positioned in the turret, which was offset to the left of the tank. The turret was so small that he also had to act as loader and gunner to the 57mm gun. Directly below and slightly in front of the commander sat the driver. With no room in the turret for a coaxial machine gun, the third crew member sat on the driver’s right who would operate the ball mounted 7.7 × 5.8mm Arisaka Type 97 machine gun. These two crew members would have been relatively well protected from enemy fire.

Losing to the Chi-Ha

At the time of its conception, the Chi-Ni was considered the superior tank as it was so much lighter and cheaper to build. However, whilst the Chi-Ni and Chi-Ha trials were in progress, the Marco Polo Bridge Incident occurred on July 7th 1937, marking the start of the Second Sino-Japanese War.

Peacetime budgetary limitations evaporated with the outbreak of these hostilities with China. With this, the somewhat more powerful and expensive Type 97 Chi-Ha was accepted for development and service as the Imperial Japanese Army’s new medium tank. It would go on to become one of Japan’s most highly produced tanks.

Only one Chi-Ni prototype was ever built and its fate is unknown. It is likely that it was broken down and recycled with its parts put back into circulation. 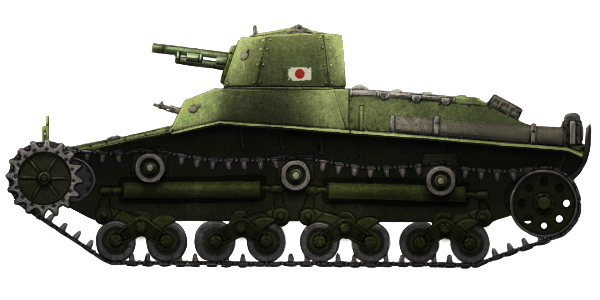 Illustration of the Type 97 Chi-Ni by Andrei ‘Octo10’ Kirushkin, funded by our Patreon Campaign.

How bad is the penetration on the 57mm gun? In WoT, it’s sufficient for its tier, but WoT is about as accurate as a KV-2 shooting at a moving Luch (i.e. 59 Patton). Also, may I ask where some of the illustrations are? Multiple articles are missing them (including this one).

I’d have to really suggest to everyone that one shouldn’t use World of Tanks as a base for the handling of guns. As you say, World of Tanks is notorious for inaccuracies ranging from the slightly absurd to criminal neglect.
How bad was the gun’s penetration? Keep in mind that the Type 97 57mm was an infantry support gun, not so much an AT gun. Cursory glances online suggest 25mm at 1000m. Let me put that into perspective – The Soviet 20kl could get through 32mm at 1000m, and that gun was much higher velocity.
To answer your other question, our illustrator is having a break after years of non-stop illustrating.
-a TE Moderator

Late response, but the type 97 57mm gun had a pen of around 35mm at short range, however a later modification increased its muscle velocity and it pen to 48mm at 100m or so, a HEAT shell was also produced later in fo AT defense, which gave it a pen of 55mm.
However the main use of this tank gun was for infantry support and wasn’t meant to fight other tanksexcept for emergency situations, in which case it would use these HEAT shells. These shells would reliably pen an m5 Stuart at least I guess.

How long has this site been up?

Closer to the Ha-Go if anything.
– TE Moderator

How come some of the more recent articles do not have illustrations of the tank made by one of the moderators like the old ones?

Hello, our illustrator is taking a well deserved rest from illustrations. Missing illustrations will be added when he returns.
– TE Moderator

Hey. Might I suggest an article, in the form of the Danish armoured car V3. It was made in by members of the Danish Resistance movement, based out of Frederiksværk – a small town in Northern Zealand. It was made on the chassis of a Ford FAA. I’ve included a source http://www.frihedsmuseetsforlag.dk/boeger/books-in-english/the-danish-armoured-car-v3.aspx

Great, good to know. If you need translation for it, just say the word. Since i’m a nativ dane, i’d be happy to help you.

Very interesting to find out about these lesser known vehicles. Cheers. The poor commander must have had his work cut out for him by having to fill three roles!