In the past year, Wargaming’s mobile version of its flagship game, ‘World of Tanks: Blitz’ has been no stranger to some less than authentic tanks. The first of this type of vehicle was actually something rather unique and original. During Halloween 2015, after completing a series of special in game missions the players could unlock the Tankenstein heavy tank. A tier VII heavy tank with premium benefits.

The World of Tanks developers came up with a made up story about the tank’s origins; in the German-esque town of Middleburg, a Doctor Tankenstein drew up plans to create a monstrous, fire breathing weapon of unequaled strength and power. Gathering parts from some of the most powerful of histories tanks, he created Tankenstein.
It draws inspiration from Mary Shelley’s 1818 novel “Frankenstein”. The name of the vehicle is also derived from that of the famous book. However, a common mistake is perpetuated, as the Frankenstein name refers to the doctor who created the ‘monster’, and not the ‘monster’ himself. 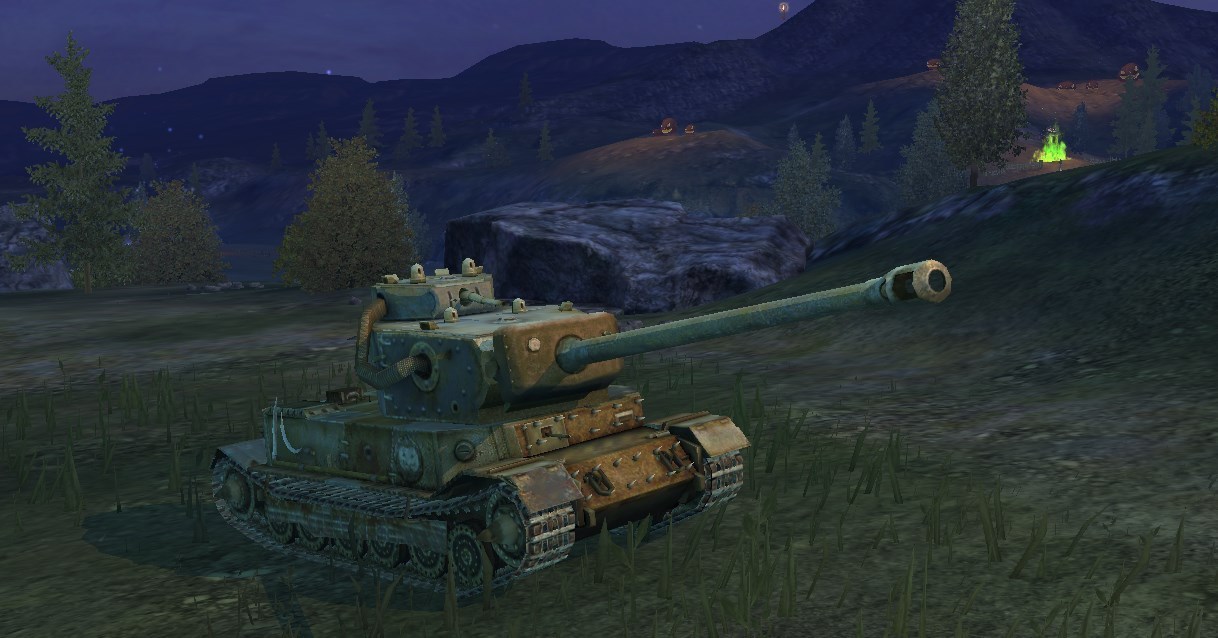 The Tankenstein as it appears in the game. Source:- worldoftanks.eu
The vehicle itself is mostly an amalgamation of three vehicles. The hull is that of the Porsche’s concept for the Tiger I competition, the turret comes from one of the KV-4 variants (possibly from V. Dukhov’s design). The main armament isn’t fixed, the players being able to chose between the 105 mm T5E1 from the American T29 Heavy Tank concept or the 130mm B-13-S2 from the Soviet SU-100Y SPG prototype.
Mounting the 105mm gives the tank increased frontal turret armor as the T29’s thick mantlet is also added. The 130 mm gun is more powerful inside the game, but it lacks the above-mentioned mantlet, which lowers the vehicle’s frontal turret armor
The vehicle is adorned with abnormal features, including ventilation piping on the right of the turret, two large sickels in place of pioneering tools on the right of the hull, metal “Stitches”, a Vickers machine gun in a ball mount on the left side of the turret, spiked rivets, spiked drive and idler wheels (front left is broken), somewhat flimsy Schürzen looking side skirts cover the road wheels, and a large hot-rod style exhaust at the left rear, which emits flames when the engine is running.

A collection of some of the Fake tanks in ‘World of Tanks: Blitz’. Source:- Wargaming/Mark Nash
The Fictional tanks keep coming in Blitz. The most recent being the IS-3 ‘Defender’, and electrically powered, 3-shot Autoloader IS-3 (also designed by “Dr Tankenstein”) . The ‘Angry Connor’, an Irish version of the Archer 17-pdr, complete with large whiskey barrel.
Along with these, came the Panzer IV Anko Special and Tiger I Kuro Mori Mine tanks from the Girls und Panzer anime series. More of such vehicles were recently added to the game, in the shape of two vehicles from the Valkyria Chronicles video game series, these are the Edelweiss and Nameless Tank.

T6 Dracula and Helsing HO promotional art. Source:-Wargaming.net
The Halloween tradition continues in 2016. This tme featuring 2 vehicles achieved in the same way as Tankenstein. This time the tanks are based of the legend of Dracula and Van Helsing, in the form of 2 unique Tier VII tanks. The T6 Dracula is a Modified AMX CDC with cape like accents, and a black paint job. The Helsing HO is a turreted Tank Destroyer featuring a Double-Barreled main gun.
Each tank has it’s own unique ammo. The Dracula has Claw (AP), Fang (APCR) and Swarm (HE). The Helsing has Stake (AP) and Belt (APCR).

While the Tankenstein is purely fictional and exaggerated in its construction, such ‘Cut-and-shunt’ tanks do exist in the real world. Sweden, Indonesia and most notably some middle-eastern countries have all had experimental or serving tanks of this type in their respective militaries. While there are many in existence, too many to list here, as such a select few are described below.

Infanterie PzKpfw MK II 748(e) “Oswald”
This vehicle was a mating of a captured British Matilda Mk. II with a 5cm KwK 38 gun. The turret was removed and replaced with the 5cm and its gun shield. “Oswald”, as it became known, was used as a training vehicle in the Wehrmacht.
Full article on the “Oswald” can be found HERE.

M4A4/FL-10
This tank was a mating of an AMX-13 turret, mounting the 75mm SA50 and the hull of a M4A4 Sherman. The vehicle was powered by the diesel engine of the M4A2. Only around 50 of these vehicles were produced. A number saw military service, taking part in action in the Sinai desert during the Six Day War of 1967.
T-100 (T-34/100)
Another modification from Egypt, this was a T-34/85 fitted with a 100 mm BS-3 anti-tank gun in a specially modified turret. The extra weight at the front of the vehicle some what affects it’s stability and makes it nose heavy. A number of these vehicles fought in the Yom Kippur War of 1973.
T-122 (T-34/122)
This is another Egyptian modified T-34. The turret has been modified in much the same way as the T-100, and the D-30 122mm howitzer has been mounted.

Odessa Tank / Na Ispug
At the Siege of Odessa, 1941, the Soviet defenders came up with a plan to turn militarized tractors (namely the STZ-5) into tanks. By using naval steel borrowed from the local naval base, salvaged (and improvised) turrets, and a variety of weapons (usually machine guns), locals began producing these improvised tanks. 55-70 were made between August 20th and October 16th. These tractor tanks were able to fend off the might of the Romanian army until it was decided by the Soviets to evacuate the city.
Full article on the Odessa Tank can be found HERE.

Hispano Suiza MC-36 con torreta de T-26
During the Spanish Civil War (1936-1939), many vehicles were captured by the opposing side and reused. One such vehicle was a large pre-Civil War armored car designed for the police, which was flung into the furnace in the early stages of the war on the side of the Republicans. At some point, likely 1937, a Nationalist captured MC-36 was given a T-26 turret in place of its more humble Hotchkiss machine gun-armed dome turret. It served as the command vehicle for “Agrupacion de Carros del Sur“.
Full article on the Hispano Suiza MC-36 can be found HERE.

STRV M/42-57 Alt. A.2.
In an effort to up-gun their already vastly outdated Stridsvagn m/42, a meeting was held on February 15th 1952 on possible improvements. One design was to mount the French AMX-13 turret and gun on to the M/42’s hull. This idea never saw production, but the M/42 did later receive an upgraded turret and was redesignated Strv 74.

T26E4 “Super Pershing”
This was an up-gunned M26 Pershing with salvaged Panther tank armor fixed to the bow and mantlet. Two large external recoil springs were also added to deal with the increased recoil force of the larger gun. 1 vehicle served in West Germany, early 1945.
Full article on the Super Pershing can be found HERE.

the tank body looks like ferdinand / elefant i think ?

most people don’t remember that the monster’s name was “adam”,not frankenstein.

The title of the article explicitly mentions that it is a fictional tank. TE includes articles like this so that our audience can be more informed as to the origins of fictional or otherwise dubious tanks that they may encounter on the internet (ie the infamous Krokodil or JagdMaus)
TE Moderator

What is a “Jagdmaus?” That sounds really big.

Basically a ‘what-if’ Maus with a Jagdtiger-like superstructure

This website uses cookies to improve your experience while you navigate through the website. Out of these cookies, the cookies that are categorized as necessary are stored on your browser as they are essential for the working of basic functionalities of the website. We also use third-party cookies that help us analyze and understand how you use this website. These cookies will be stored in your browser only with your consent. You also have the option to opt-out of these cookies. But opting out of some of these cookies may have an effect on your browsing experience.
Necessary Always Enabled
Necessary cookies are absolutely essential for the website to function properly. This category only includes cookies that ensures basic functionalities and security features of the website. These cookies do not store any personal information.
Non-necessary
Any cookies that may not be particularly necessary for the website to function and is used specifically to collect user personal data via analytics, ads, other embedded contents are termed as non-necessary cookies. It is mandatory to procure user consent prior to running these cookies on your website.
SAVE & ACCEPT
61 shares