There is something about war which can tickle the dark recesses of the minds of even brilliant engineers and make them forgo all sense of reality or common sense. The Shuman ‘Superdreadnought’ is a particularly fine example of completely unrestrained thinking by any measure of cost, use, utility or reality, and really stands out as something approaching the acme of bad ideas for WW1. There were certainly plenty of terrible ideas at the time for equally or even bigger vehicles, but Shuman’s design stands out amongst them as the product not of some crazed madman, but of a well respected and distinguished engineer, someone who should have known better. 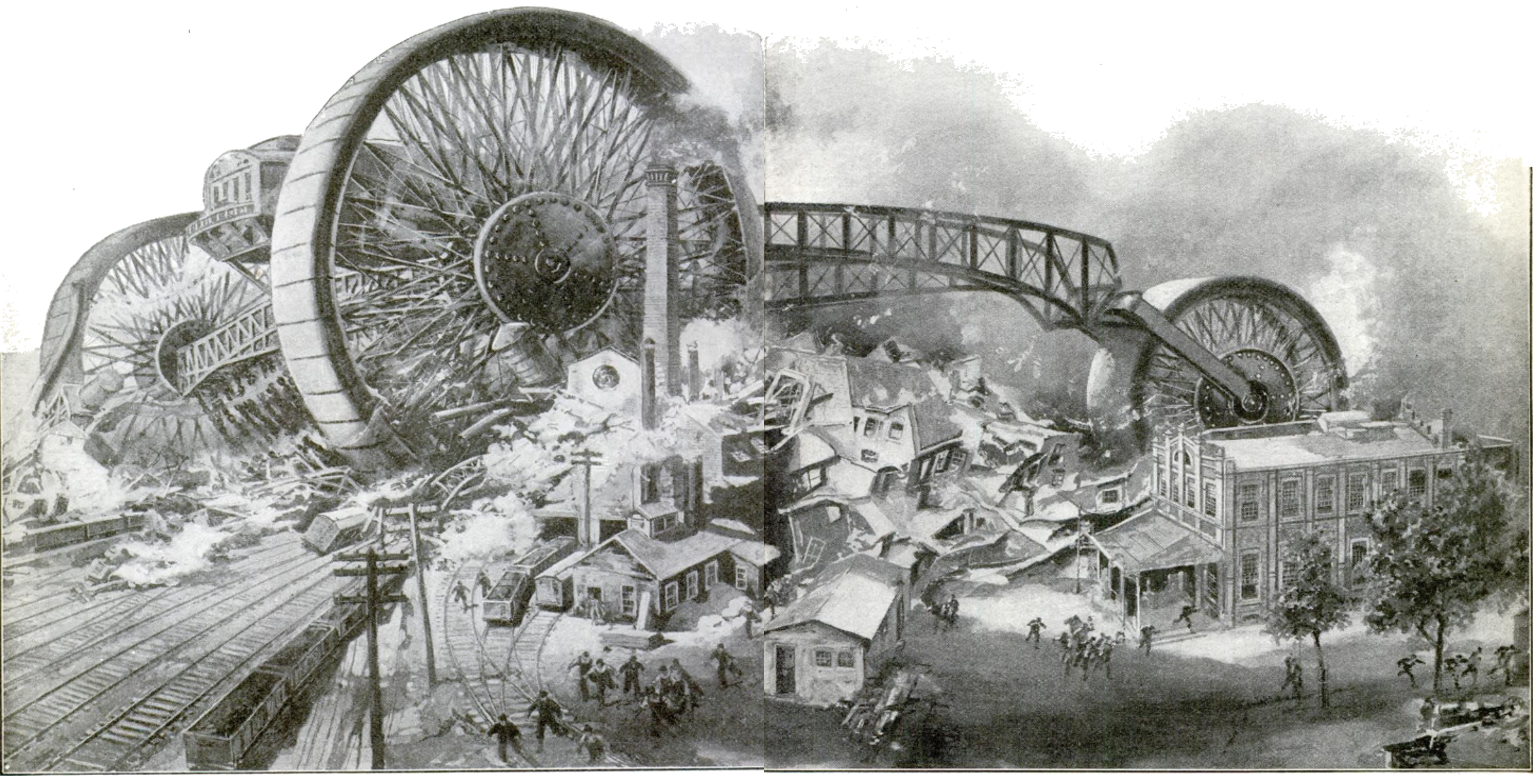 “Only the Battleship is a Real War Machine”

So says Frank Shuman, a ‘distinguished and famous engineer’ according to Popular Science Magazine, in 1916. Why would such a juggernaut be needed and why, he laments “is there no land battleship, something comparable with our own Pennsylvania, something which will concentrate within one volume the striking power of an army”. Shuman lays out a case in the magazine why an enormous wheeled machine, well armored and “capable of traveling at high speed” should be the weapon of the future, ignoring small issues, like the damage it would bring just moving to a battle and the incredible costs involved.

He does, however, logically explain the case as to why so many of these giant wheeled machines were considered at the time. As the size of the wheel increases, the size of the obstacle to cross gets proportionally smaller. Thus, the giant wheel idea is supposed to be better able to climb barriers, walls and cross ditches and the such simply by virtue of size. The problem though is that large wheels have a lower surface contact area than tracks and push dirt in front of them as they move, creating additional rolling resistance thus putting pay to Shuman’s silly claim that “there is no good engineering reason” against a giant wheeled machine.

Graphic representation of why tracks are superior to wheels on a yielding surface. Photo: elmersmanufacturing.com

Shuman makes matters even less believable when he states that such a machine as his would be capable of over 100 miles an hour (161 km/h) and able to climb a 50 foot high (15 m) hill with ease. Quite how such a machine was to accomplish this speed when there was no suitable engine is inadequately glossed over. The best Shuman could offer for his fanciful idea was the concept that, as ships could produce a large amount of horsepower, then all he would need was some competent engineers to make a smaller version of those battleship oil-fired steam turbines to produce 20,000 hp. Even so, with a weight estimated by him of 5000 US tons, this would only have delivered 4hp per ton. Shuman had considered the problem of shock and vibration though, but the shock absorbers were are as far-fetched as his engine concept and were supposed to rely upon oil-filled cylinders 3’ (0.9 m) in diameter.

Effectively unarmed, this machine was supposed to rely instead on its rolling mass to cause the destruction the artists illustrate so admirably. Rolling at speed across the terrain, it is supposed to simply crush everything before it by means of the two large front wheels and the third trailing wheel. As if that was not enough destruction, between the two front wheels was a long row of heavy chains suspending “weights aggregating many tons” (he also describes them as weighing ‘several’ tons each) dangling down, crushing or smashing anything running underneath too.

Having illustrated in no doubt thrilling terms the destruction this machine could bring to the enemy by simply moving, Shuman fundamentally fails to discuss or explain how it was meant to get to the battle. He simply fails to contemplate how it could avoid bringing similar destruction to friendly towns, cities, roads, and railways en route. Perhaps the artist commissioned cheekily foresaw this problem too, which might explain why Shuman’s machine is not destroying a European town but an American one.
Each wheel was meant to between 150 and 200 feet (46 to 61 meter) in diameter and 20’ (6 meters) wide. The body of the vehicle itself consisted of a series of latticework structures extending across the length and width providing the strength and rigidity for the machine. 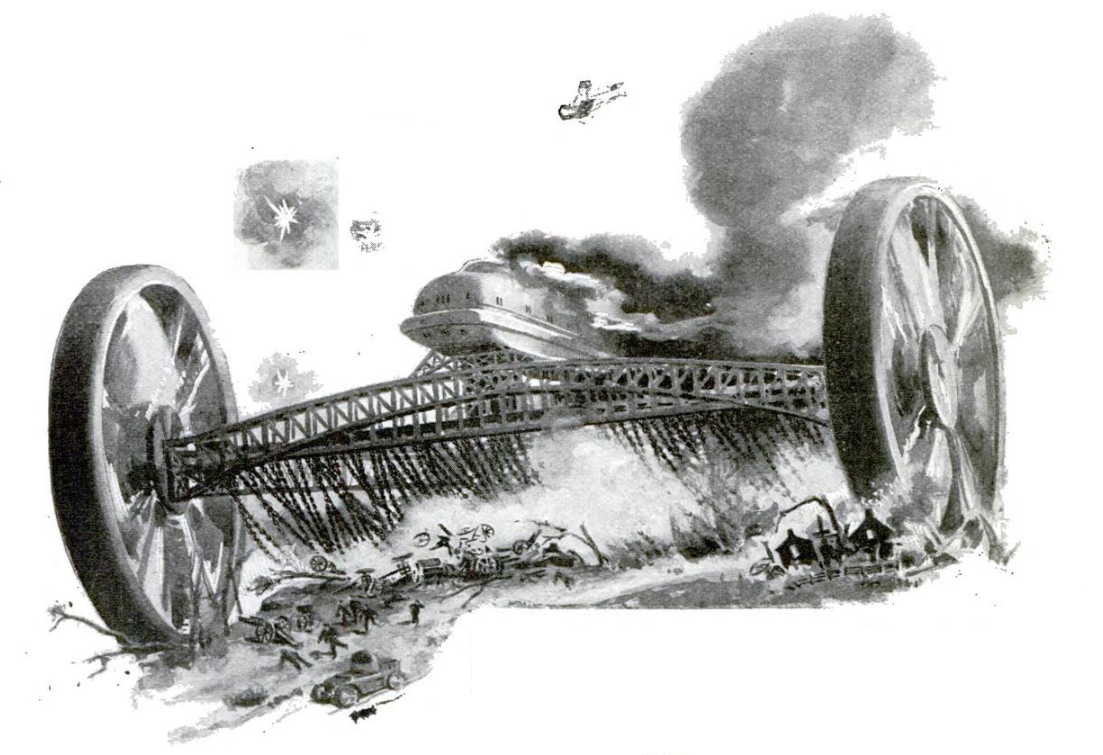 The boat-shaped cabin of the Superdreadnought and the 300’ long span of dangling chains. Photo: Popular Science Magazine December 1916

It was not proposed to protect the wheels with armor other than in the area of the wheel hub simply to keep the weight down. The hub is described as “the center of each wheel would be a mass of armor as thick of that as a battlecruiser”. It is confusing that, on one hand, Shuman selected not to armor the wheels in order to keep the weight down when his entire offensive action is meant to depend upon the speed and mass of the machine and even more confusing that the hub would have to be armored so thickly. ‘Armor’ though, would hardly seem necessary as Shuman planned on making these wheels out of steel plate armor 4” thick (100 mm) bolted together.

The only other part of the machine to be armored was the cabin perched on top of the lattice framework. The front was supposed to be shaped akin to a ship’s conning tower and the whole cabin was to be ‘ship-shaped’ which was to be thickly armored and contain the engines for the machine and a crew of some 30 or so men. Those 30 crew, perched hundreds of feet in the air, would have to access and exit the machine by means of a lift, such as in a tower block. However, with no armament carried, it isn’t clear what these 30 men were supposed to do. 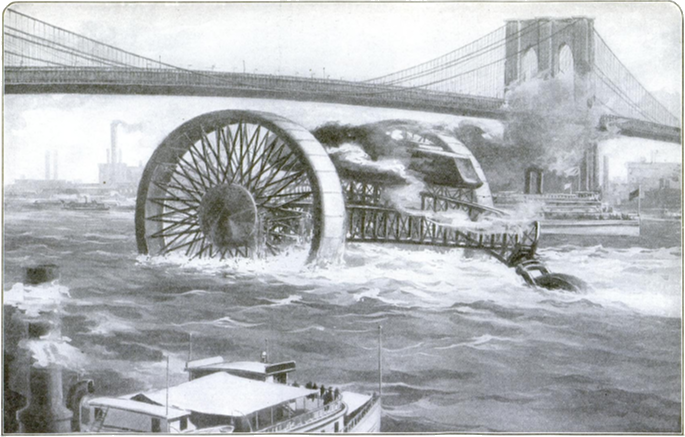 Frank Shuman was an engineer and an inventor from Philadelphia. He had developed a type of safety glass (called ‘Shuman’s Safetee-Glass’) and had achieved a certain level of international respect for his work with solar power generation, using the sun to boil water to make steam for power production in 1907 and a half-acre sized power plant in 1910. Immediately prior to WW1, he had even produced a power plant in British Egypt which in 1914 had to be dismantled for scrap to help with the war effort. 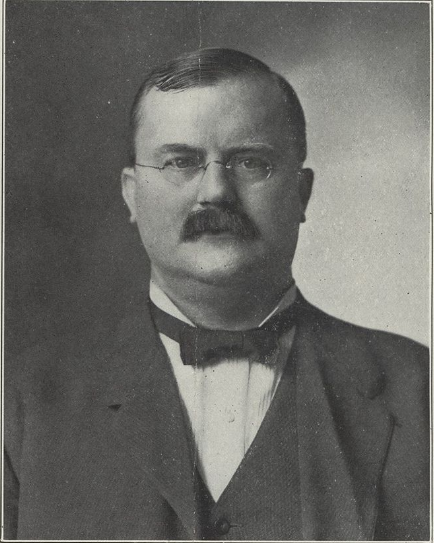 Despite his inventive nature and holding a large number of patents, including several relating to steam power, Shuman did not seek to patent his Superdreadnought nor, it seems, did he pursue any other military ventures. His ‘sun-engine’ solar ideas were ahead of their time and could have been revolutionary were if not for the intercession of WW1, but his wheeled dreadnought was pure fantasy. He died two years later aged 56 before his solar dreams could be tried again with the war over, and his fantasy wheeled dreadnought was forgotten before it had even begun.

The Popular Science magazine article should not be taken too seriously. This Shuman Superdreadnought saw little if any chance of being taken seriously as a military machine. Many of this type of magazine articles were created simply to create thought amongst the readership and any idea of actually producing such a machine would have been fraught with major hurdles Shuman had not considered such as how it could get around without damaging infrastructure or how to recover one when broken down. The Shuman Superdreadnought is certainly an eye-catching idea to smash enemy lines with a grand machine but Shuman was neither the first nor will he be the last to propose such a machine. Shuman should be remembered not for this oddity but for his pioneering solar work instead. 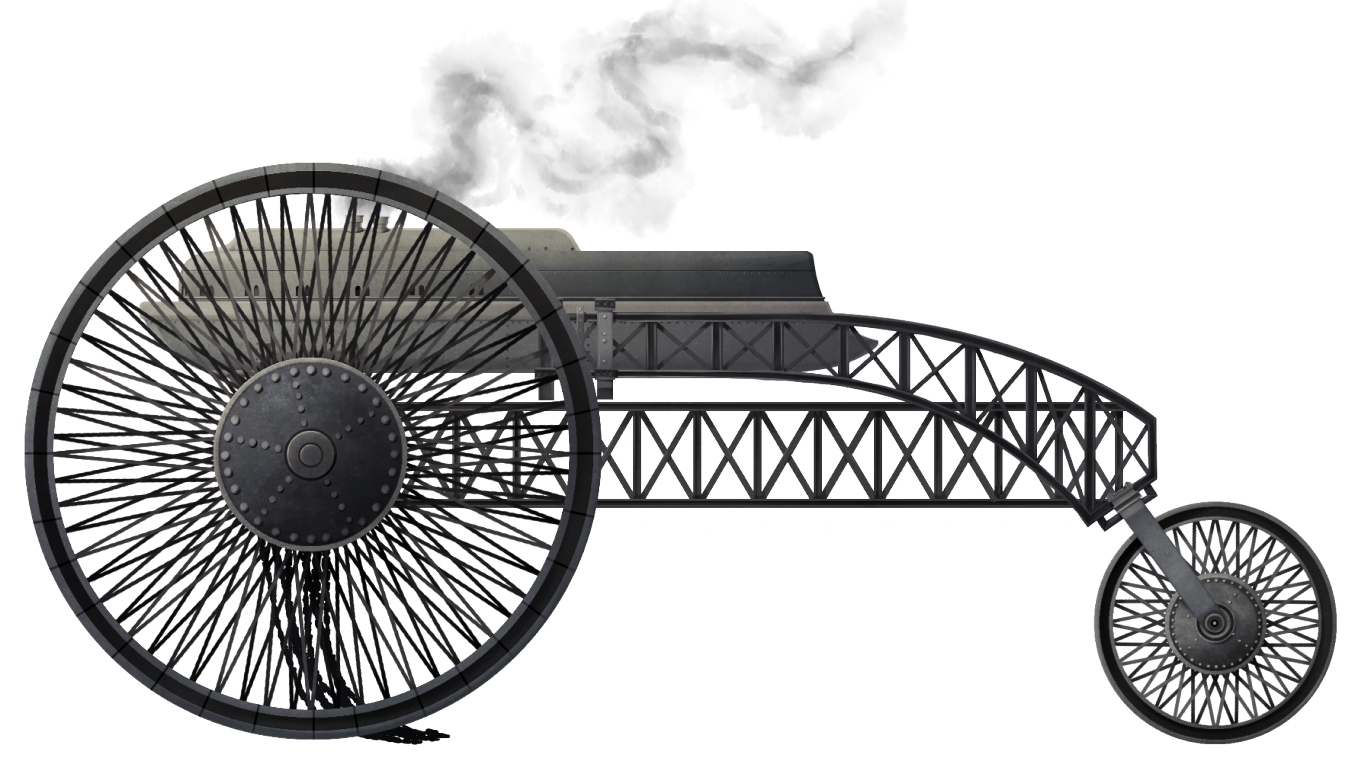 The Shuman Superdreadnought, showing the large front wheels, the weighted chains hanging between the wheels, the tubular structure and the large cabin at the top. Illustration by Andrei ‘Octo10’ Kirushkin.

“giant wheeled machines were considered at the time”
Not only at this time: In WW2 the Germans had softskins with big wheels like the Radschlepper Ost or the Lauster Wargel and prototypes of armored vehicles like the Krupp Räumer or the Vs.Kfz.617. To the present day dump trucks and loaders in quarries use really large wheels. There has to be some advantage to big wheels over tracks.

Simplicity of design and maintenance is a consideration

The Raumer is currently in writing. Impressive behemoth which indeed went well beyond the drawing stage. More also on land battleships: https://www.naval-encyclopedia.com/tech/could-land-battleships-have-existed-in-reality/

the resources needed to build this machine would be astronomical, it would be better to be spent on other military equipment.

How can the crew get on the vehicle? There seems to be no connections between the ground and the cockpit.

It’s glorious because of how ridiculous, humongous, and impractical it was meant to be. Setting aside the nightmare that is even getting the thing to move, it would be awesome to see someone try to bring this thing to life in a hypothetical WWI scenario. It’d give Americans (like me) a sense of pride in our ability to make ludicrous designs, like our European counterparts. That, and/or just get a good laugh from the absurdity of the tank.

I agree, this is even more funny than the P.1000 or P.1500. It could exist, but why no armament. Also, there are these wonderful things called planes, that could have wrecked it in a hot second. Still, it would be fun to see built in today’s world just for laughs.