Giuseppe Rossini was the engineering brains behind the Ansaldo Carro Veloce (Ansaldo Fast Tank) projects. In 1930 and 1931, he had created a prototype based loosely on the general arrangement of the CV29, which, in turn, was copied from the Carden Loyd Mark VI Light Tanks purchased from Great Britain in 1929. Throughout 1930 and 1931, that design had been refined and tested, which resulted in the 2-1-1-2 bogie suspension system seen on production CV3 series vehicles from the model of 1933 to the model of 1935.

Whilst it was a robust suspension system, it was not perfect, and various minor changes were made, mostly to the rear idler, but also to the bogies themselves. On top of this, the armament was weak. A single machine-gun had been mounted inside the Prototypes of 1930 and 1931 in a limited-traverse mount. It would not be until 1934 when this was this switched to a double machine-gun but, again, this was in a hull mounting with a limited field of fire. The obvious solution to the underwhelming firepower was the addition of a turret. Rossini clearly saw an opportunity to address both the suspension and firepower limitations and, sometime between 1932 and 1935, created a new vehicle with improvements to both suspension and firepower.

This new vehicle was using the same welded steel hull, with armor ranging from 8mm to 14mm, as in the CV3/33 Series I Light Tank (the Series I being distinguished by the air intake for the engine being located centrally at the back of the casemate, flanked by two rectangular hatches which could be opened from inside). Based on the use of this hull (which was discontinued in 1934 when production switched to the Series II vehicles), this would appear to date the design between 1932 and 1934. It is possible, however, that Rossini was simply experimenting with an older body that had been discontinued after this date. By 1935, production had switched from welding the casemate to a bolted structure, so the estimated likely date range is kept at 1932 to 1935 for this reason. The rest of the casemate retained the features of the CV3/33 Series I production tank, with the same flush-fitting mudguards and casemate mounted headlamps.

The machine gun position cut into the front left was replaced with a new glacis plate which covered the hole all the way up to the nearly vertical driver’s plate. This too was now a single piece without the machine gun opening, and other than the driver’s hatch which had been retained on the right, this was now a clean single plate. The driver’s position remained unchanged. Sat on the right and steering by levers, the driver still had a single large rectangular hatch over his head to get in and out, plus the same small square vision port to his right to see out of. The vision port on the left of the casemate was kept, but instead of a seated weapons position for the commander/gunner, he would now have a turret. He would have to stand up to use this small turret, though he could presumably sit back down in the hull if he wished to when he did not need to maintain observation or man the machine gun in the turret.

Other than the obvious addition of a turret, the most significant change to the vehicle was the new suspension system. The normal CV3/33 used the standard 2-1-1-2 suspension consisting of bogies connected and held together by a stiff outer steel bar. The movement of the wheels was thus limited, which reduced off-road performance. A new type of coiled spring suspension was tested at around this time on a Series I Production CV3/33 and showed that the wheels had a wider range of movement than the bogies which were held rigidly in place by a horizontal bar.

For this turreted tank, Rossini used a new system. Four large wheels connected by a horizontal flat steel bar sandwiching the wheels. This steel bar was connected to a pivot point on the lower edge of the hull. A leaf spring was at the back of each side of the tank on the horizontal bar, although this was reversed on the rear pair of wheels on each side. This system meant that when the wheels encountered an obstacle or change in ground-height, the wheels could pivot together around this central pivot point and the leaf spring attached to the horizontal bar provided both shock absorbency but also returned the bogey back to its starting position. 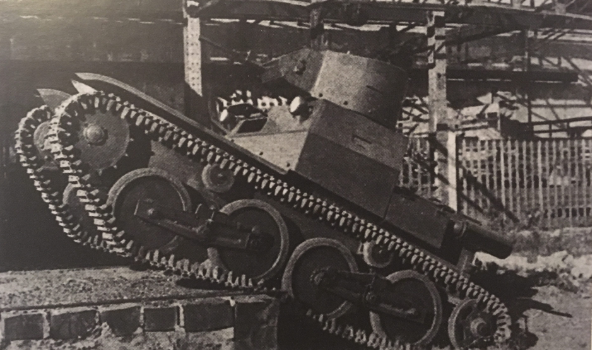 The armament of the Series I vehicle had been weak, consisting of just a single Fiat Model 1914 6.5 mm machine gun (tipo aviazione). This was a much more suitable weapon for a vehicle than the previous water-cooled machine gun used in the prototypes of 1930 and 1931, but was still inadequate for providing sufficient weight-of-fire to support infantry attacks and had insufficient power to penetrate enemy revetments or even light armor. This deficiency was addressed in the production of the Series II vehicles from 1934 when a new mounting was fitted, this time coupling a pair of Fiat 1914/1934 8 mm machine guns together. This firepower increase came at a price. 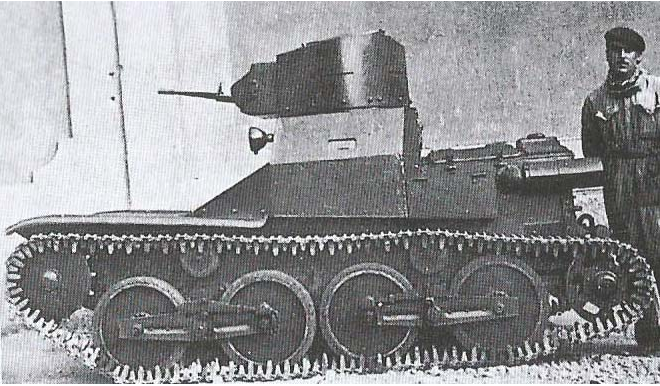 Side view of the modified CV3 showing the turret and new 4-wheel suspension system. Source: Ansaldo

Along with this decrease in ammunition stowage came the further downside of weight. The new machine gun mounting was also significantly heavier. The solution was clearly met with the addition of a turret. A machine gun mounted in a turret atop the machine would be able to provide not 24 total degrees of traverse, but 360. Thus, a small circular turret was added over the commander/gunner’s position. Around the circumference of the turret sides and rear was a series of 4 horizontal vision slits which served to significantly improve visibility from the vehicle too. The front of the turret had a similar style of mounting as was fitted previously in the hull, projecting out of the front of the turret in a box structure, into which a second fitting was installed which could move up and down. Through this second piece, the single machine gun armament was mounted to the right-hand side. Unlike the former hull mount, there does not appear to have been any ability to move the machine gun side to side within this mounting, which would be no surprise as lateral movement was now provided by the turret.

The roof of the turret was formed from a single steel hatch opening backward, but when closed, actually sloped forwards slightly. The exact armament is not clear. Rossini demonstrated his vehicle fitted with just a single machine gun of an unknown type, possibly the Fiat M26 or M28 (experimental) 6.5 mm machine guns, although whether a different machine gun was planned is unknown as the 6.5 mm Fiat Model 1914 (tipo aviazione) was already known to be insufficient. With added space inside the tank, it is also likely that there was sufficient room in which to store more ammunition in addition to the 2,320 rounds carried in the Series II vehicle. Photographic evidence shows one extremely useful feature of the design, which was that the machine gun could actually be withdrawn by the commander/gunner and, with the turret roof open, mounted pointing upwards as a defence against low flying aircraft. None of the CV3 vehicles had, to this point, any capacity for protection against aircraft whatsoever, and a single 8 mm anti-aircraft machine gun was as much as most Italian tanks in WW2 had a few years later, so the flexibility of the firepower on offer was excellent.

Questions arise as to why the fitting of a 20 mm cannon, such as the 20 mm Breda (20/65 Breda M35), was not attempted, although it is possible that it was considered. Without the original paperwork for the development, designer’s notes, or blueprints though, it can only be speculated. Should such a weapon have been considered however, it would have been a significant increase in firepower, providing just what the Italian troops fighting with Franco’s Nationalists had really needed in the Spanish Civil War (1936-1939). During that war, the Italian machine gun armed tanks were mostly ineffective against the Soviet-supplied T-26 tanks of the Spanish Republic. Ironically, the Italian Breda 20 mm cannon, being the ideal weapon against the T-26, was mounted on another light tank during that war, the German Panzer I, and on an Italian CV3 Series vehicle for exactly this purpose. 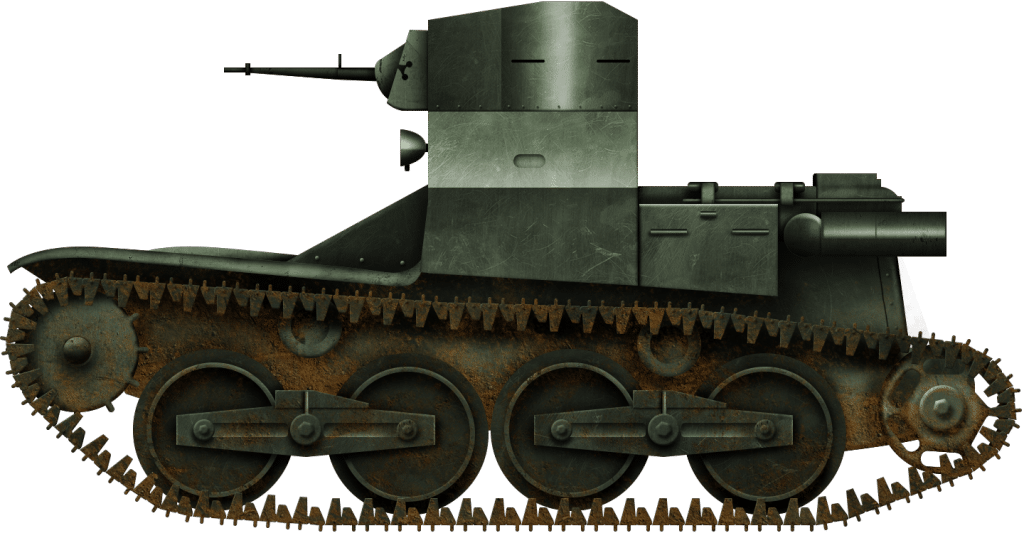 Very little is known about this development. At a time when the CV3/33 Series II was either starting production or in production, this design was a significant improvement over that tank in all areas from enhanced mobility on and off-road, better visibility, to improved firepower. Even retaining the same CV3-005 43 hp petrol engine of the Series I and II vehicles, this tank would have had comparable performance in terms of speed, combined with beneficial features, such as greater cross-country ability, better visibility and more flexibility in terms of firepower. 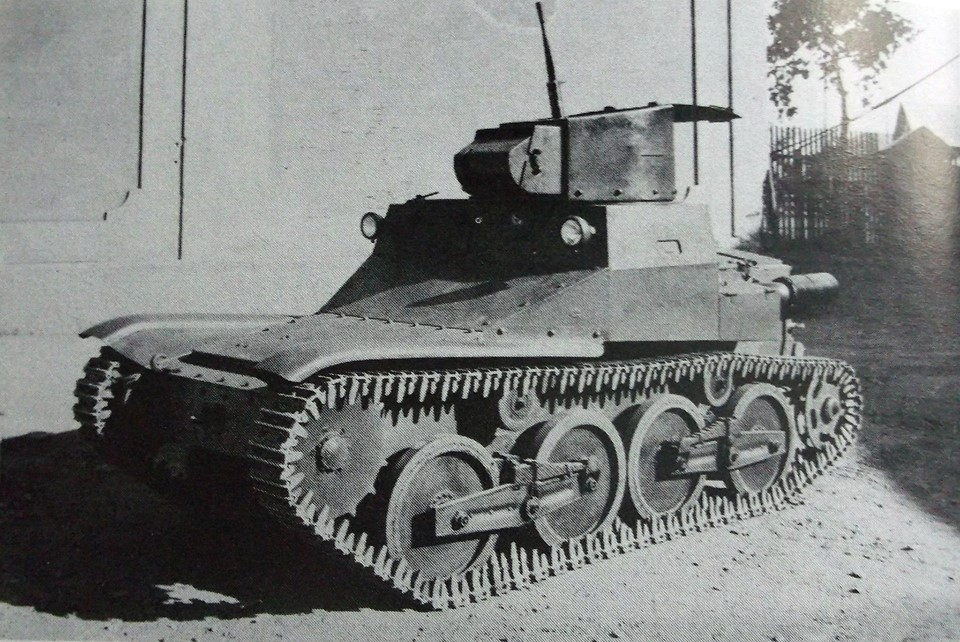 Modified CV3 showing the elevated position of the main armament for use as an anti-aircraft gun. Source: Ansaldo
It was to come to nothing, however. The potential of this vehicle was never realized, as the development of the CV3 continued into 1935 and other schemes for a light, turreted tank began. Those plans would improve on the Series I’s suspension as well, but never again was the CV3 series vehicle to have this big-wheel suspension system fitted.

Thanks Massimo – that information has been added.

Pitty they did’t try this suspension in any hevier tank, in my opinion it would be a nice try.