The Hundred Hours War, sometimes referred to as the Football War, between El Salvador and Honduras did little except worsening tensions between the two countries. El Salvador, the smaller but more densely populated nation, had invaded its larger neighbour to the east in July 1969 in a border dispute, made worse by Honduran reforms expropriating land and property from El Salvadorans living in Honduras, as well as persecuting this minority group (~15% of the population of Honduras).
The El Salvadoran invasion had used improvised armored trucks known as ‘Rayos’ and conventional tanks, the American-supplied Light Tank M3A1, during the campaign. Where the elderly M3A1’s were found to be somewhat hopeless and vulnerable, the Rayos proved to be immensely valuable. The lessons from this war shaped the military outlook of El Salvador and armor was not going to be light, fast and well armed. The M3’s had had their day, and the Rayos had proven its value. 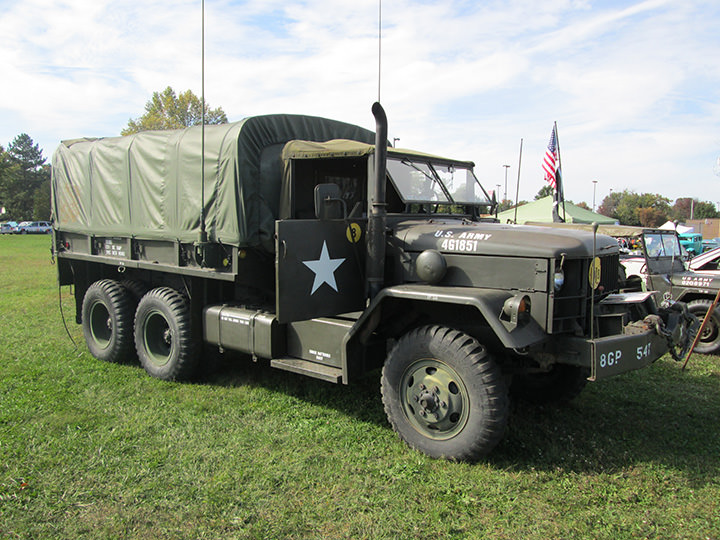 The ‘Rayos’ were based upon REO made M34/M35A1 2.5 ton utility trucks with the first five Rayos being M34-based and the later ones (built around 1970-1972) being based on the M35A1. The name ‘Rayos’ itself is a corruption of the name REO to Spanish, meaning ‘Lightning Ray’, a good name for a quick armored vehicle for interdiction. Some of the base trucks were also built by AM General and Kaiser Motors but ‘REO’ was the generic name misapplied to form ‘Rayos’.
The REO M35 used a Continental OA331 inline 6-cylinder ‘Gold Comet’ 127hp petrol engine and 5-speed transmission whereas the M35A1 used the Continental LDS-472-2 140hp turbocharged diesel engine.
In the 1969 war with Honduras, these vehicles had been hastily improvised to provide additional armor as well as being used to tow field guns such as the US supplied 75mm pack howitzers. Based on a truck, they could also be used to haul troops and supplies and formed an ideal platform on which to mount .50 caliber M3 heavy machine guns. The Rayos were, in effect, the perfect vehicles for a small and relatively poor country fulfilling the roles of logistics, APC, and armored car at the same time.
Almost as a subset of the Rayos were the Ninas. The El Salvadoran army had been so short of armored vehicles that not only did they convert trucks but they also employed repurposed armored trucks which had been used by banks for transporting money. These too were armed with machine guns but were less useful than the Rayos for carrying troops or goods. They had the advantage though of being completely enclosed, whereas the Rayos were open-topped. The Ninas were named for the crying noise they made due to the removal of the mufflers on the exhaust. 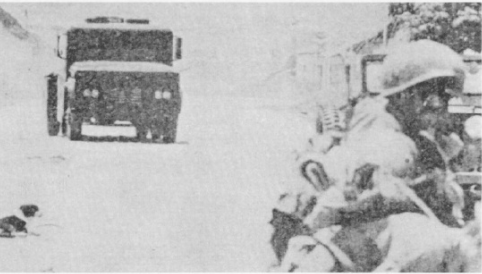 El Salvadoran Nina armored truck seen in the captured Honduran town of Nuevo Ocotepeque, July 1969. Source: Spencer
These vehicles provided support in 1969, in particular, the Rayos were put to good use in the attacks in the Eastern Theater. Here, in coordination with bulldozers being used as makeshift tanks, the El Salvadoran 11th Battalion took control of the town of El Amatillo and the bridge there, followed by a defence from a Honduran counterattack the next day. Five Ninas were used alongside the Rayos in these operations. 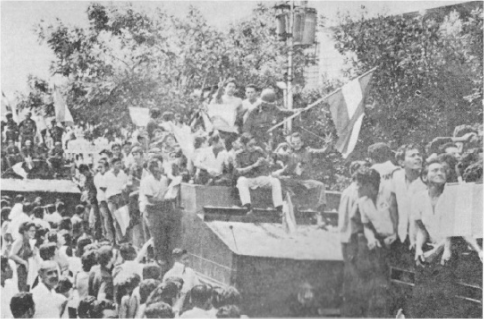 Open-topped Rayos during the victory parade in San Salvador, August 1969, flying the national flag. Source: Spencer
Some 20 Rayos were manufactured between 1969 (for the war) and 1972, as an arms embargo after the 1969 war meant no new armored vehicles could be imported. The first batch of five vehicles was prepared by Maestranza de la Fuerza Armada de El Salvador (FAES) as ‘fast assault’ vehicles. With a crew of two and a compliment of up to 18 men in the back, the first batch of these vehicles was solely reliant on the crew to use their personal weapons. A second batch was able to mount machine guns and, later, several (at least 3) were fitted with the Yugoslavian UBM-52 120mm mortars.

One of the Rayos improvised armored trucks, as it was probably painted up during the invasion of Honduras. Illustration by Yuvnashva Sharma, funded by our Patreon campaign. 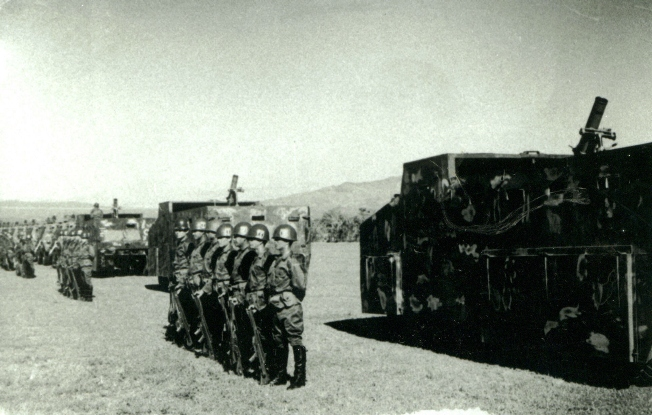 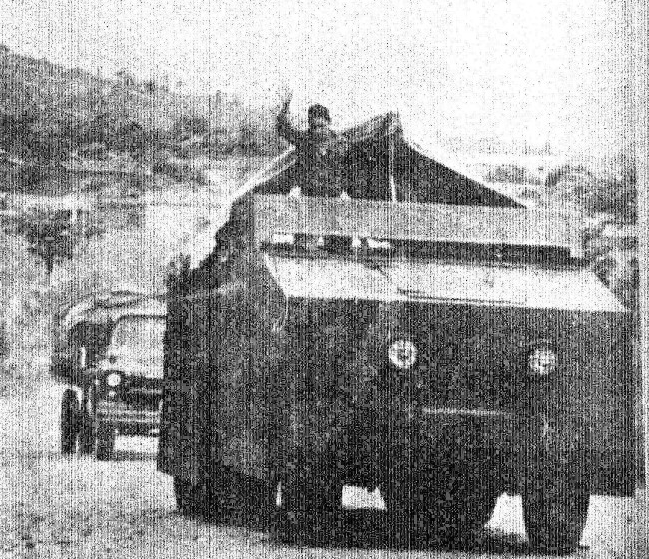 Open-topped Rayos with a tarpaulin over the top, presumably for protection against the weather. Source: Montes

Covering a truck in armor adds a lot of weight if it is to provide protection from small arms fire. In an effort to keep the weight down and also probably due to a shortage of available armor plate in the country, FAES made these vehicles with a composite. The outer layer was steel armor followed by a gap and another layer of steel on the inside. The gap between the two plates was stuffed with cotton fiber fill as a means to reduce weight and improve protection.
It is not known how effective this system was as the thickness of the layers is not known but it was presumably sufficient to protect against small arms fire. The construction of the plates was crude yet effective, with large flat areas covering the sides with large plates hanging over the pneumatic truck wheels at the front and back. The cab had just a single full-width visor for the crew to see out of and a slot in the door-covering panels on each side.
From the few photographs available, it does not appear that any doors were cut into the armor, which would mean the crew would have to get into the cab from behind. The only part of the truck fully enclosed was the engine, with the radiator behind a large steel grille on the front. Access for maintenance was by means of a large rectangular door cut into the armor over the bonnet on the vehicle.
These vehicles found use during the war, followed by internal security work such as patrols and convoy escorts but the weight of the armor and the open-topped nature of the design limited their effectiveness as armored vehicles. Within just a few years, and with the ability the import armored vehicles once more, the Rayos were obsolete. 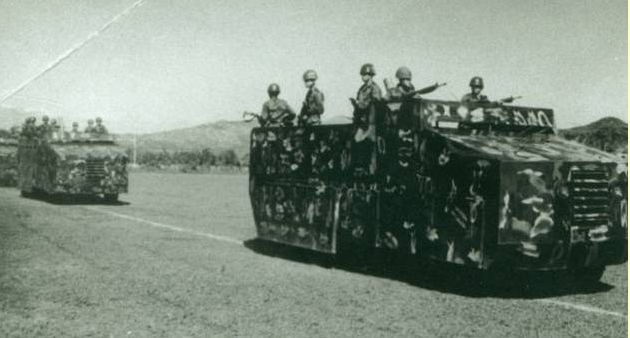 These vehicles had provided excellent service for El Salvador. Cheap, simple, and versatile they were ideal weapons platforms and, during the time of the arms embargo after the 1969 war, the heaviest armor available to the army other than the M3A1 Stuart tanks. With the arms embargo ended a few years later, they were no longer needed and were taken out of service by 1975. By 1975, El Salvador was operating ten UR-416 APC’s delivered from West Germany, and later, AML 60/90 armored cars from France.
The ‘armored truck’ role was reprised though by the ‘Mazinger’ armored trucks in 1979, when the Civil War started in El Salvador. No Rayos are known to survive. The Ninas which were used in 1969 presumably went back to their bank-cash duties following the war.

2 replies on “Rayos and Ninas in El Salvadoran Service”

The first five Rayos likely used a standard six-wheel M34 truck chassis equipped with REO “Gold Comet” or Continental OA331 inline-6 gasoline engine matched to a 5-speed manual transmission. The M34 was standard in the Salvadoran Army and was later supplemented with M35A1 trucks. It is reported that the later Rayos suffered headgasket failures, so this would point out to the use of 140hp Continental LDS-427-2 turbo engines. This engine was usually mounted on the M35A1 truck (known for exactly having this problem). The M35A1 it was basically the same chassis than the M34, but using a 10-wheel configuration. This suggest that the series of Rayos built after July 1969, and between 1970–72, used the A1 truck chassis.