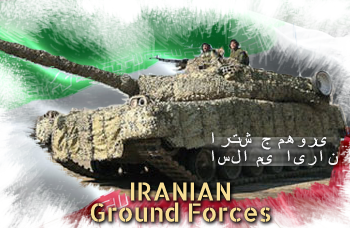 The Iranian Army today: Self sufficiency and confidence

Following the traumatic experience of this eight years long war, a new staff made of seasoned commanders emerged, that pursued a dramatic restructuring. Between 1992 and 1995 an additional HQ was created and between 1997 to 1999, four corps were registered according to most sources.

The Self-Sufficiency Jihad Organization in side the Army was to have a considerable significance in tanks developments in Iran for last decade. Among the numerous local upgrades, here are some of the ones used by the ground forces:
Samsam (Sword): Based on the M60A1 tank, with reactive armor (Kontakt-5?), EFCS-3 Fire Control system, Laser warning system and IR jammers.
Sabalan: Based on the M47 Patton (probably experimental), fitted with rigid side skirts, newly built turret and 105mm gun, laser range finder, new fire control system and communication equipment.
Tosan IFV (1995) About 20 of these reverse-engineered FV101 Scorpion, upgraded are also in service for reconnaissance units.
Mobarez (2006) About 50 MBTs, upgraded 2006 variants of the late Chieftain by the Shahid Kolahduz Industrial Complex. It is possible that the remainder of the Chieftains are currently upgraded to this standard. Safir-74: Local denomination for upgraded T-54/55/Type 59s.
Boragh (1997) About 200 has been produced in all versions, based on the Chinese Type 86 (itself a late copy of the BMP-1).
Hoveyzeh Locally manufactured M-109, about 180 in service today, as well as an unknown number of derivated Raad-2.
Raad 1 Locally manufactured copy of the 2S1 Gvozdika acquired in 1996.
Raad-2 Locally built mix between the M-109 turret and Boragh APC chassis. 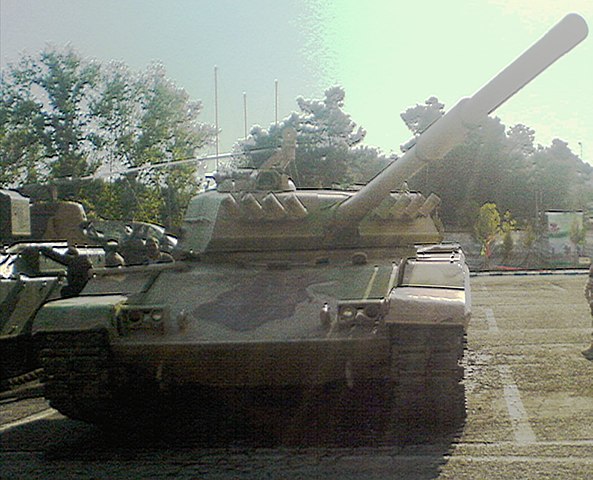 The Zulfiqar is largely based on M60A1 technology mixed with elements of the T-72. About 250 are estimated in service today of all variants, affected to elite units.

Zulfiqar Standard elite main battle tank. So far, three versions are known, for perhaps 100 tanks known overall, but these figures can evolve. The Mark II/III are a well-upgraded version that recalls the Abrams.

Zulfiqar I in 1998 with the "southern" pattern.

Zulfiqar 2 prototype in the 2000s with the desert pattern.

Zulfiqar III with another variant of the 4-tone camouflage pattern in 2012-2013.

Also called T-72Z, this is a locally upgraded variant of the T-54 by the Defense Industries Organization of Iran. Protection comprises augmented armour plus ERA blocks. The gun is the M60 Patton M68 105 mm, coupled with a modern Slovenian Fotona FCS and the engine is Ukrainian.

Safir-74 with a desert camouflage.

Upgraded variant on the same lines as the Zafir-74 based on the Type 69.

A T-72Z. Four types of camouflage patterns were observed for this type. Desert (sand/black or sand/reddish-brown), Northern regions (Olive Green and reddish-brown) or the "autumn" 3-tone pattern (sand, yellow, brown).

Type 72Z with a 4-tone camouflage.

One of the best MBTs on offer in 1978 was the Chieftain tank imported -on Iranian specifications- from Iran.

Iran received M60A1 Pattons from the US in the 1970s, prior to the revolution.

Based on the numerous M47 Patton still in storage but completely modernized.

About 120 and 65 ex-Libyan and Syrian T-55s were imported, modernized since.

About 200 had been purchased directly from China or through North Korea. Decked with flags to not be confounded with their Iraqi adversaries.

Tiam Tank as shown on the official presentation, 13 April 2016.

Tiam without ERA or side skirts, showing the supposed shape of the add-on armour welded on the old cast turret of the Type 59. A strange Sino-American hybrid.

Prospective livery of the Tiam, if built in serie and operational.

About the Karrar MBT

The Karrar and below a T90MS. Apart the "dressed-up" main gun base, both looks close, but certainly not identical.

Announced on 12 March 2017 it was stated as the first Iranian Tank with a state of the art electro-optical fire control system, a laser rangefinder, a ballistic computer, with the (now classic) ability to fire accurately on moving targets day or night. Many observers advanced it was like a modified carbon copy of the T-90 (even T-90MS), although Iran rejected any alleged Russian collaboration. Production was announced to start on 12 March 2017, although deliveries are planned for the beginning of 2018 with an order of 800. Other than a familiarity with the T-72 (wide) family, for which the Karrar is related (it could have been a rebranded "marketed" upgrade rather than a newly built).

It is armed with a 125 mm smoothbore with autoloader capable of launching anti-tank laser-guided missiles and a roof-mounted RWS (Remote Weapons Station 12.7 mm). This latest Iranian Main Battle Tank (2017) is as foggy and conjectural-spawning as previous ones. It can be argued that the RWS alone looks quite familiar with the Russian model. The armour comprise composite armor, with ERA on the glacis and turret frontal arc, rigid panels over the sides completed by low-mounted side skirts while slat armour is mounted around the engine compartment.

As shown by the above comparison, the Karrar, is significantly diverging to show rather an imitation from an existing Iranian base rather than a Russian T-90MS assembled locally. They shared the same basic hull also seen on the T-72 as shown by the lower glacis, but other than that, they are many modifications, some almost looking there "for the show" like the neon lights. 1-The Tracks links: More like the rubber pads shown by the M60 tracks.
2-The semi-rigid mudguards: The real flexible part starts lower, the upper part is divided
3-Absence of IR illuminators
4-Additional light/IR illuminator mounted on the roof
5-Reduced or absent sensor mast
6-"wrapping" around the main gun base
7-'Lighter' RWS design, although both looks the same height. On another photo it looks far less bulky than the Russian model.
8-Modified commander cupola design (with shielded, encased periscopes)
9-Open air ERA bricks on the glacis plate - On the T90MS they are encased.
10-Xenon-like lights