The American designed M60 main battle tank has been around for decades and remains in service with numerous nations around the world. When it came out decades ago the fully cast armor was very good but with the spread of anti-tank weaponry such as rocket-propelled grenades and anti-tank guided missiles the armor is today outdated. Keeping a tank in service with upgrades has significant advantages for a nation, for example, it is cheaper than buying new and makes crew training easier as they are already familiar with many parts of the vehicle. To this end, many schemes and packages have been offered in recent years to modernize the M60 and ensure it is capable of performing its role as a main battle tank. The Upgrade Solutions package offered by Leonardo is a new (for 2017) package combining upgrades to the armor, automotive systems, internal system, and firepower. 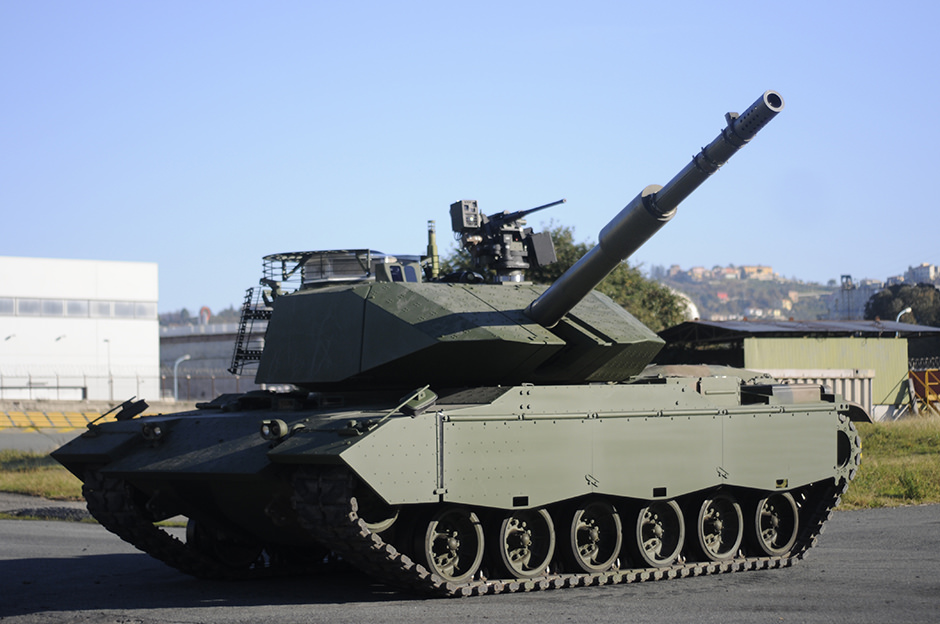 The Italian defense company Leonardo unveiled their M60A3 Upgrade Solution on the 17th October 2017 at the Bahrain International Defence Exhibition and Conference (BIDEC) at Stand E2 with the flags of both Italy and Bahrain emblazoned on the glacis. The upgrade is intended to offer nations already operating the M60 an upgrade to their vehicles to offer capabilities more in line with third-generation main battle tanks. Leonardo is the new name of what used to be OTO Melara defense, a firm which produced hundreds of M60 tanks for the Italian army during the Cold War, so has extensive experience in the manufacture and maintenance of these vehicles. 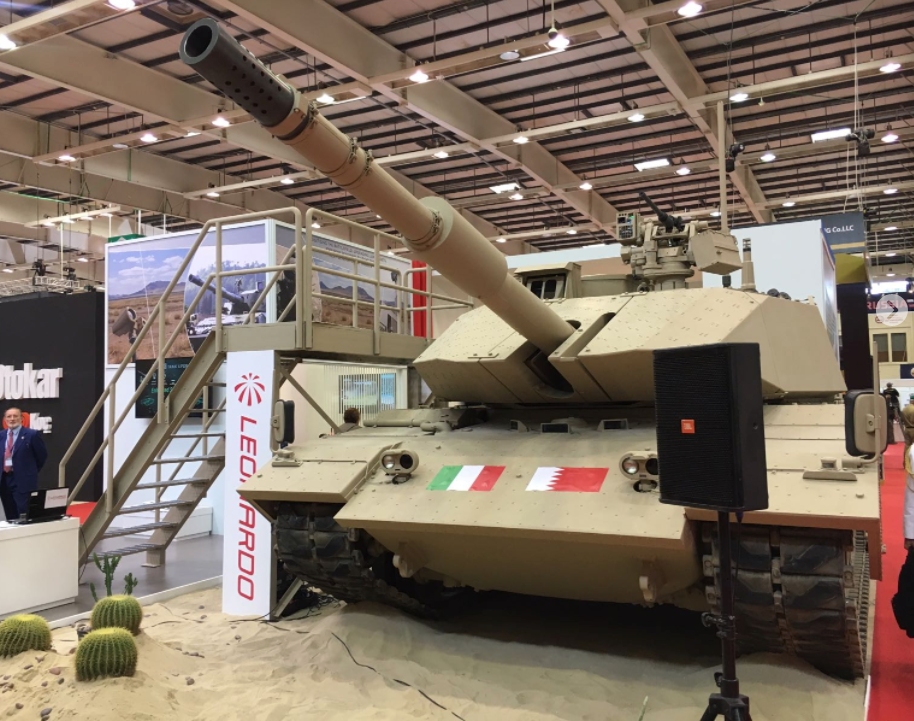 M60A3 development photo shows the new gun fitting in the turret but a different placement for the HITROLE turret. The upgraded turret armor has not yet been fitted. Source: Leonardo 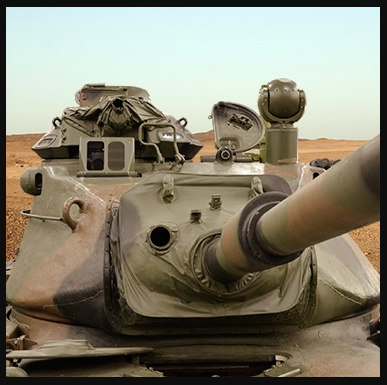 M60 turret fitted with the TURMS-D digital fire control system Lothar gun sight on the right of the turret in front of the cupola. Source: Leonardo 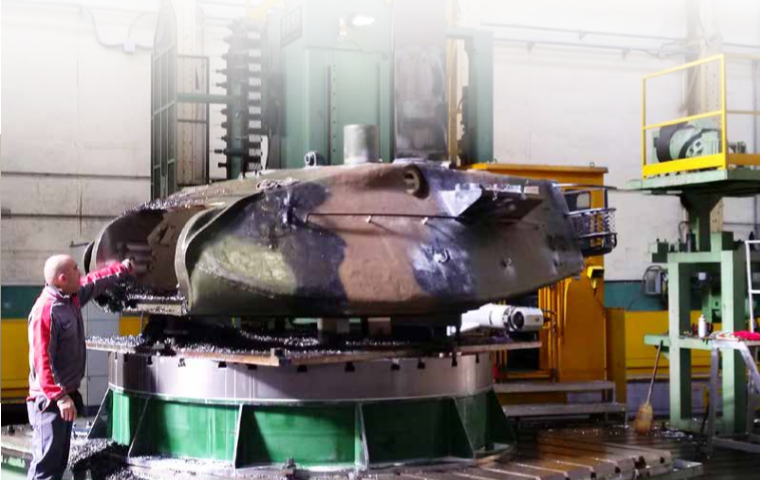 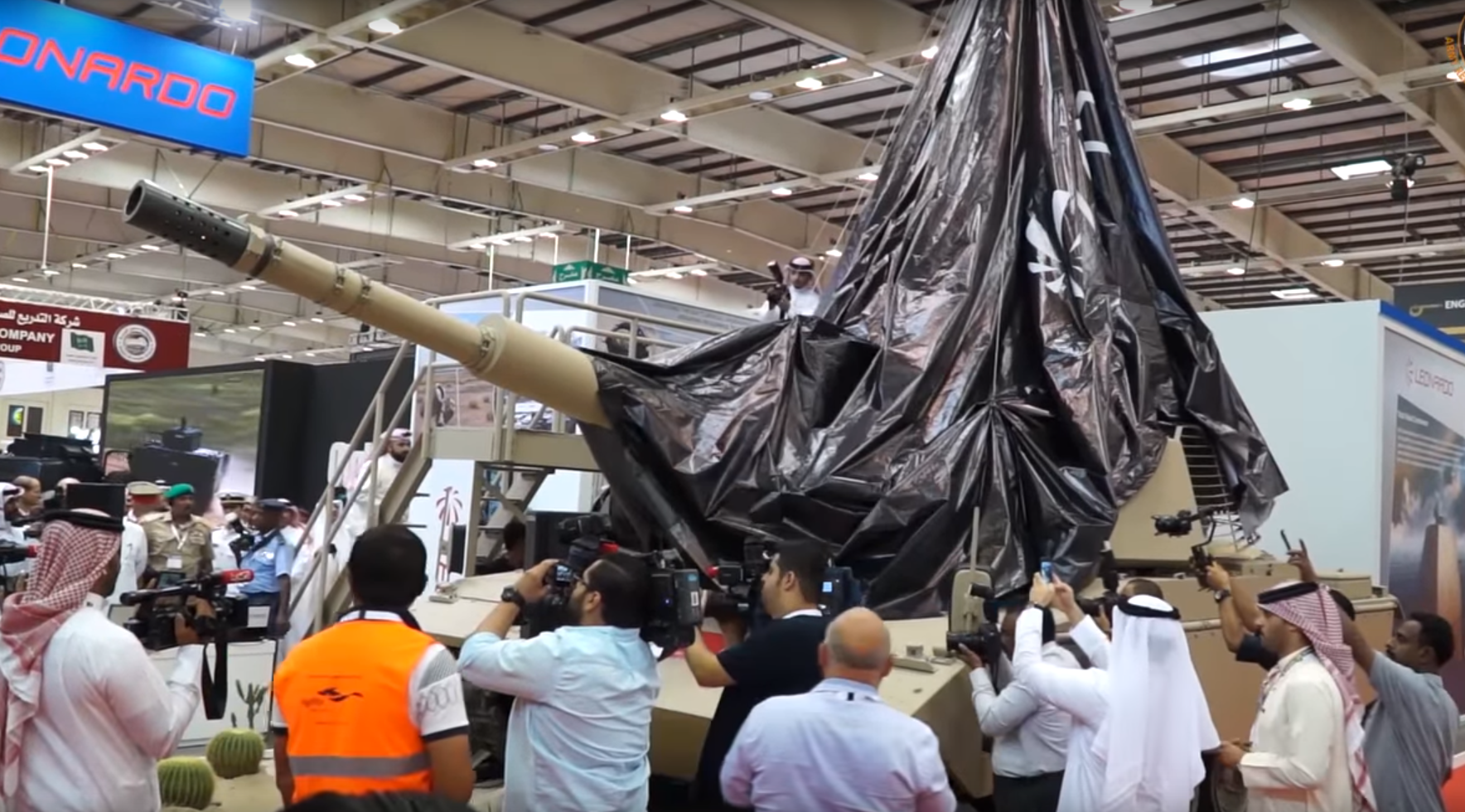 The unveiling at BIDEC on the 17th of October 2017 Source: Defence Web TV

The Leonardo M60A3 Tank Upgrade offers the same 120mm 45 calibers low recoil smoothbore gun as used on the Centauro II tank destroyer. This armament, combined with the LOTHAR gun sight and TURMS digital fire control system, give hunter/killer capability and increase the effective range. The gun, like on the Centauro II, is able to fire standard NATO 120mm smoothbore ammunition. Should it be required, all the fire control upgrade features are compatible with the 120mm L40 NATO standard gun too if the customer doesn’t want or can’t afford the newer L45 higher performance gun.

Leonardo’s 120mm L45 smoothbore cannon as fitted to the M60A3 Tank Upgrade package. Source: Leonardo
The new 120/45 gun from the Centauro II offers a weight saving of 500kg over the older 120/44 gun due to a redesigned light alloy cradle, as well as performance improvements.

View inside the remanufactured turret showing the commander’s cupola removed and location of ammunition stowage. Source: Leonardo
The most distinguishable feature of the gun is the retention of the 20% efficiency ‘pepper-pot’ muzzle brake which reduces the recoil forces the trunnions have to manage. 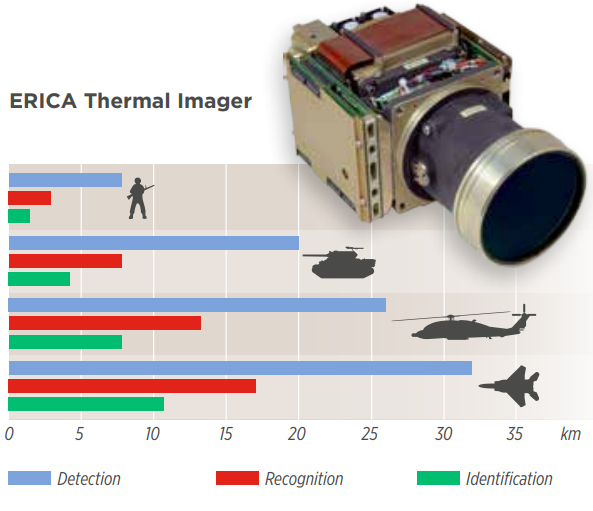 ERICA Thermal Imager as fitted within the new electronics and sighting suite for the M60A3 significantly extends the sighting range for the crew. This compact system is fitted within the MINI-COLIBRI system on the HITROLE-L. Source: Leonardo
The LOTHAR day/night sight incorporates a Laser Range Finder (LRF) with a 10km range and either an LWIR or optional (higher cost) MWIR camera and a double Field of View (FOV) TV camera. The LOTHAR is suitable for guns ranging from 23mm up to 125mm caliber. This system can be linked either mechanically or stabilized with the mechanical option being the lower cost choice. Stabilization allows the gunner to operate regardless of vehicle movement.
The turret is also fitted with a meteorological sensor for wind and temperature data etc. for the fire control system and a new digital fire control system. 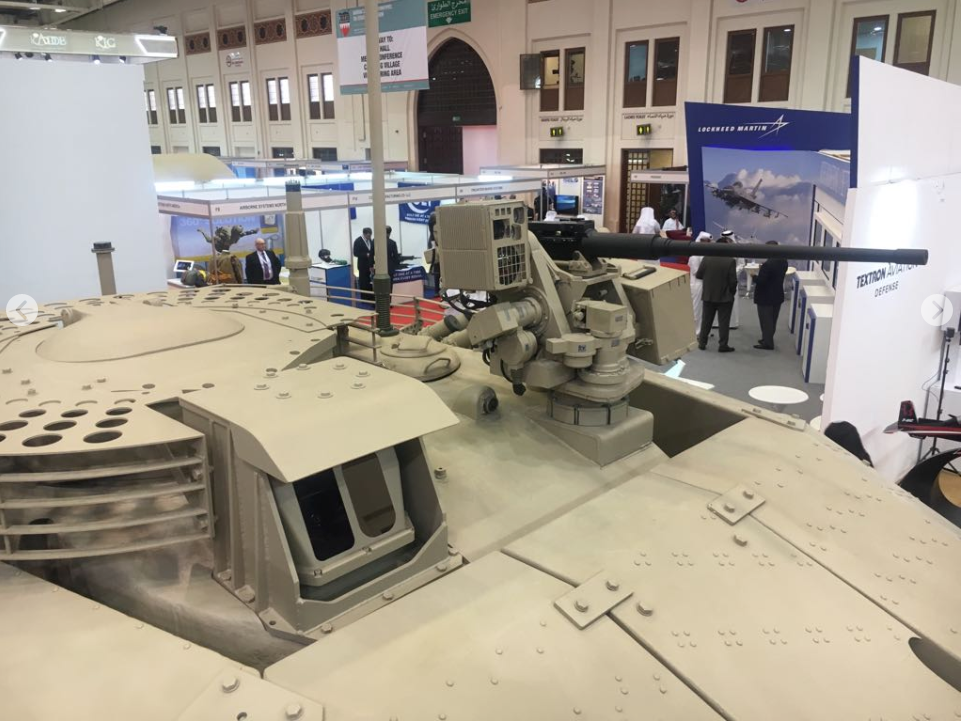 The Hitrole-L remote control weapon system for the M60A3, an armored cowl for the Lothar gun sight and the new reduced height cupola with slat armor surrounding it. Source: Leonardo 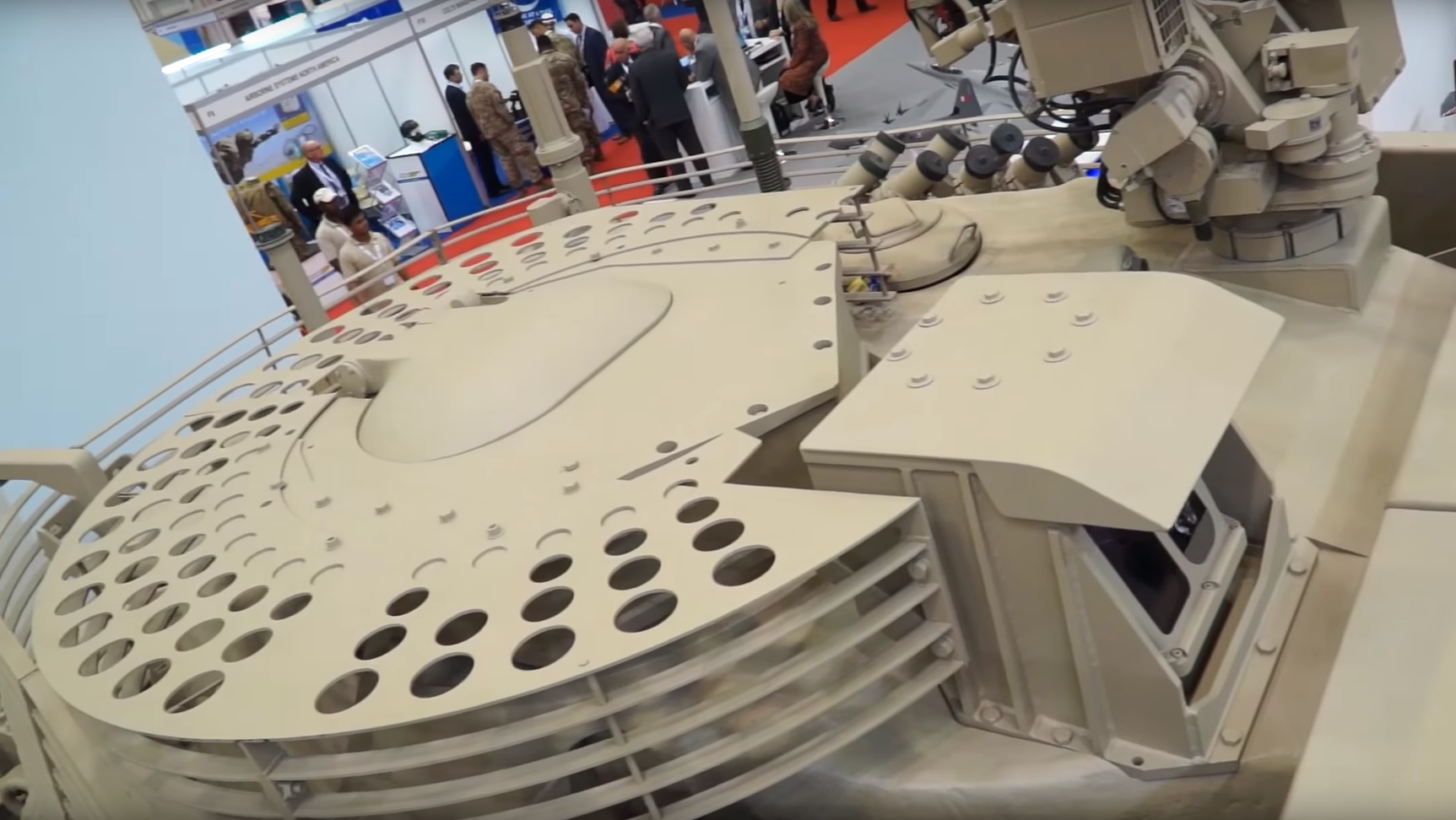 Another view of the new cupola for the M60A3. Source: Defence webTV

Dimensions in mm of the HITROLE-L system shown with 12.7mm HMG fitted, in this set up it can carry over 400 rounds of ammunition, with a 7.62mm MG over 1000 rounds and with the 40mm AGL over 70 rounds as a higher capacity box is an optional extra to the standard universal box. Source: Leonardo
For close defense, the turret is also fitted with the HITROLE-L 12.7mm remotely operated weapons system which can be mounted on a wide range of vehicles as it requires no holes cutting through the turret or hull. The HITROLE-L is a two-axis stabilized system with the MINI-COLIBRI modular optical system comprising infra-red night vision, a daytime TV camera,  and an eye-safe Laser Range Finder. In the arrangement shown at BIDEX the HITROLE-L is mounting the 12.7mm heavy machine gun but this system can also mount a 7.62mm machine gun or the 40mm automatic grenade launcher (AGL) depending on user requirements. Ammunition is held in a universal ammunition box on the left of the system and it can be fired by the gunner assisted by the ballistic fire control computer. In the event of a total loss of power, it can also be operated manually. The use of the HITROLE system doubles as the 360 panoramic surveillance system for the commander. A final optical enhancement for the M60A3 is that the driver’s station is now equipped with the DNVS-4 (Driver Night Vision System). The sight features high-resolution thermal imaging and a day/night sight in one. 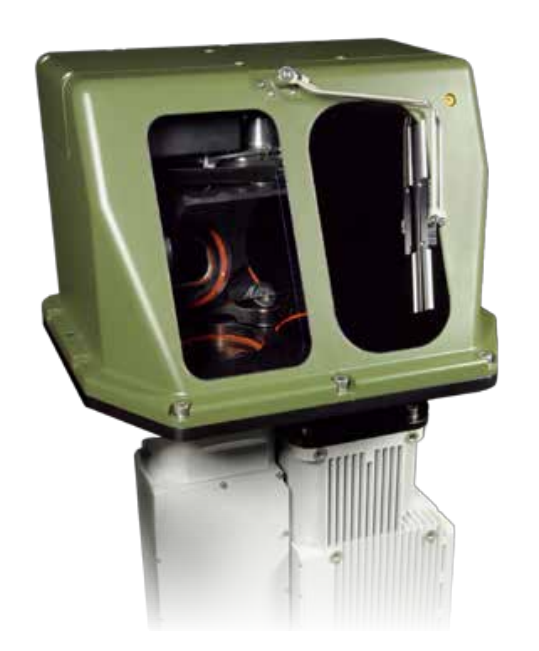 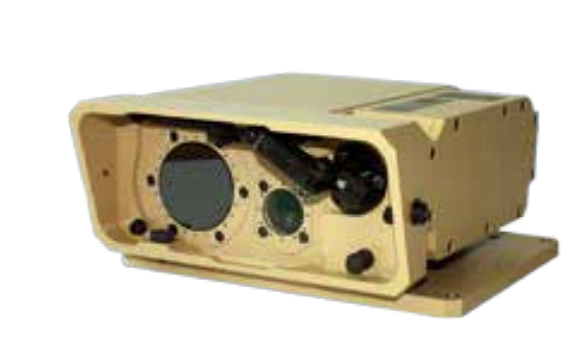 The customers for this M60A3 package are offered improved mobility via either a full refurbishment of the existing power packs or an upgrade. The new powertrain offered is stated to deliver up to 20% more power without high costs and avoiding the need for any modifications to the existing hull. This AVDS-1790-5T+CD-850-B1 908 hp engine replaces the 750hp engine and is connected to an upgraded CD-850-6A transmission. It has 75% commonality of spare parts with the existing power packs vastly reducing costs and maintenance. Additionally, there is a 650 amp generator fitted, along with improved oil cooling and aftercoolers for improving engine efficiency. Leonardo claims this system also reduces the heat signature from the engine. 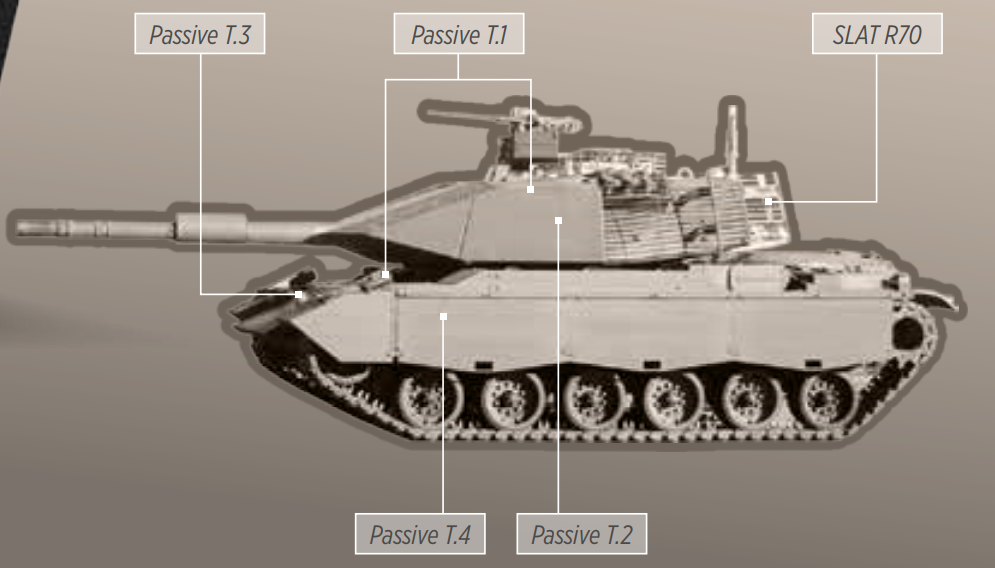 Armour arrangements for the M60A3 which can be varied to suit user specifications. Source: Leonardo 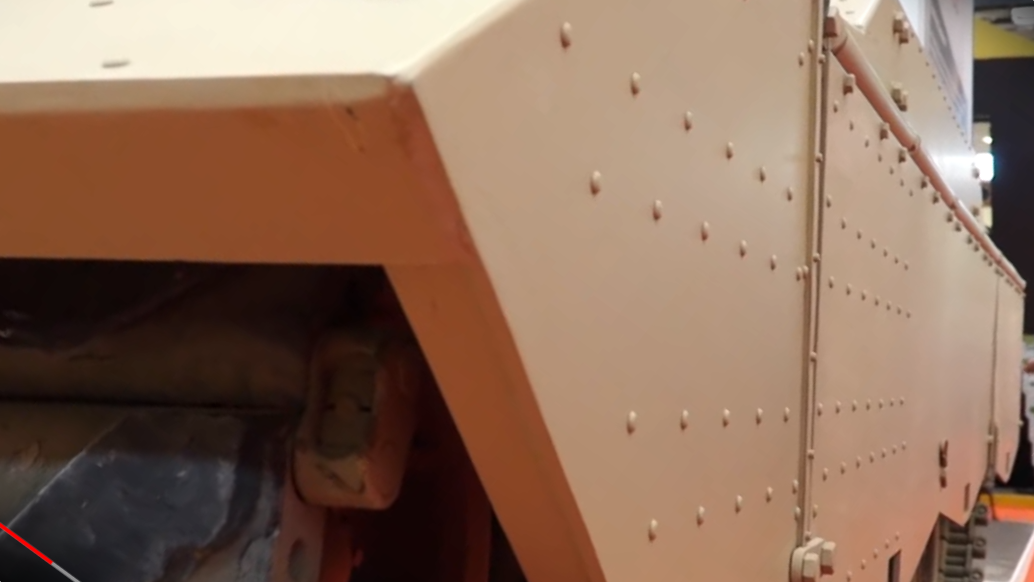 Leonardo is offering the M60A3 package with a whole new passive protection suite fitted around the M60’s existing cast armor turret and hull. Protection is claimed to meet STANAG Level 6. Protection for the turret is optimised for protection against kinetic energy (KE) weapons and artillery across the frontal arc. The hull to is upgraded to the same standard with the protection covering the hull sides extending to the third roadwheel. For the rear of the turret, slat armor is provided with an emphasis on protecting against the RPG-7 – a 60% probability of success against this threat is expected. 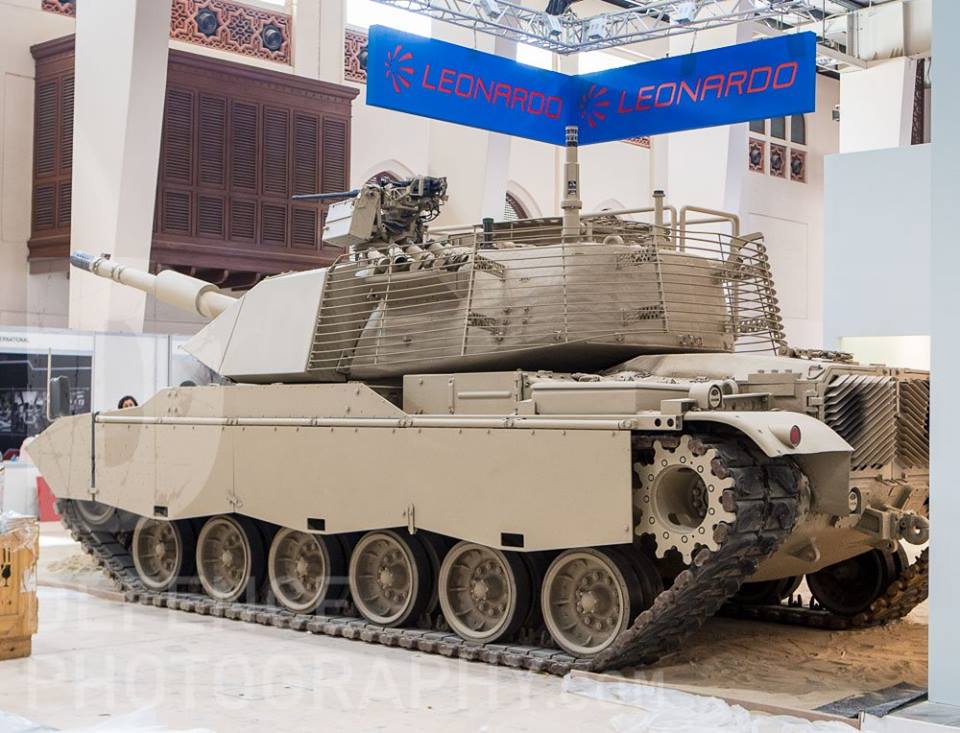 The rear of Leonardo M60A3 showing its M60 rear and slat armor. Source: Defence Photography.com via Twitter
The old commander’s cupola is completely removed and replaced instead with an armored circular ballistic plate with a hatch and an ‘Iposcope’ for the commander, the combination saving a significant amount of weight over the older cupola.

The turret has been refitted with a new set of hydraulic and servo control improving performance. The vehicle has also been retrofitted with the Automatic Fire and Explosion Sensing and Suppression System (AFSS) covering the engine bay and crew space allowing for higher crew survivability. As mentioned, an integral generator and air conditioning are also fitted. Provision is made for fitting a mine roller kit. 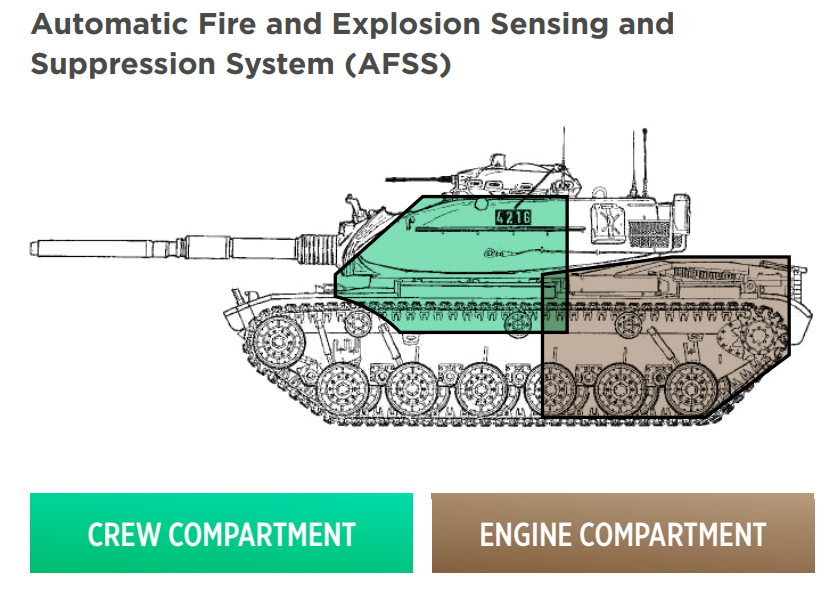 The arrangement of the AFSS. Source: Leonardo
The rest of the vehicle is completely overhauled including the torsion bars, brakes, fuel supply, electric system, wheels, seals, paint, and smoke grenades.
It is assumed that if the customer wishes for the IED jamming systems or laser warning receiver systems developed by Leonardo to be fitted that these would also be available. 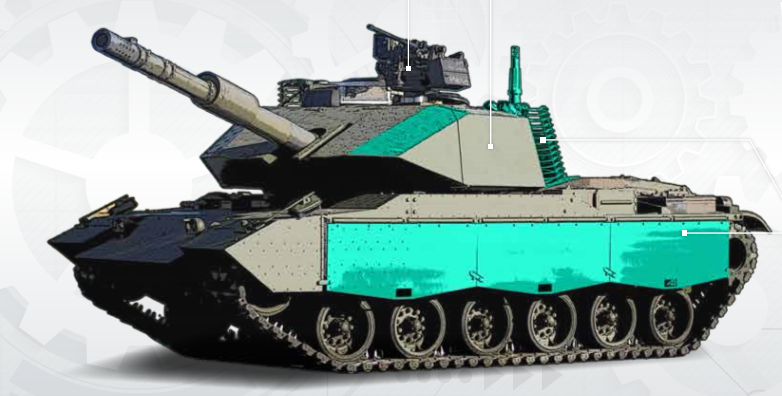 It remains to be seen who buys the Leonardo offerings but the fact that it has been revealed in Bahrain is no surprise. Bahrain currently operates approximately 60 out of date M60A3 tanks. Certainly, these would be a significant step up for that nation. There are several M60 upgrade packages on offer currently. This offering by Leonardo may well be the best of the bunch.

Rendition of the Leonardo Upgrade by Tank Encyclopedia’s own David Bocquelet.

I find, as alway, deeply offensive this ‘marketing’ use of the name of Leonardo. Finmeccanica is already to say of (including bribering), leaving outside the ‘businness’ the name of the illustrious renassaince genius!

Did somebody say ‘Magach’?

Also reminds me “Sabra” with 120mm gun.Israelien made modernisation for Turkey

Prefer the Israeli “Sabra” to Turkey Army. Similar idea, firepower is the same 120mm, Merkava tank tracks. Or the Jordanian own program to upgrade the 120mm.

According to the company, it is armed with the same gun as on the Centurio II, which is a low recoil 120/45 gun, which is distinct from the German L/44. Does anyone know what is different, performance-wise, from the German gun?

While I’m no expert, I believe the performance should be very similar in terms of both ballistics and penetration. It’s kind of like the German 7,5 cm KWK L/43 and the L/48 models. Penetration, accuracy and muzzle velocity should only be marginally better. If I can find more information regarding the 120mm L/45, I’ll let you know however as this seems interesting.