Following the 1969 invasion of Honduras, arms sanctions were placed on El Salvador, significantly limiting its access to arms and armored vehicles. The result was that, throughout the 1970s, a series of improvised armored vehicles were manufactured, most notably by the Maestranza de la Fuerza Armada de El Salvador (FAES) – the central command for ordnance for the military. Some arms deliveries did make it to El Salvador, usually via third parties, such as 27 tracked log haulers (based on the US-built M114 APC) from the USA which arrived via Guatemala and would eventually be converted into the ‘Marenco’ armored vehicles. A delivery of West German UR-416 armored cars arrived by the end of 1975 and, although these had been delivered unarmed, they were soon armed and used in the civil war (1979-1992). The attacks on roads, bridges, government buildings, and other infrastructure by six to seven thousand guerillas of the Marxist Farabundo Marti National Liberation Front (FMLN) meant that the government junta, made up of the military and Christian Democratic Party, struggled to maintain effective control over the country and supply routes. Despite financial backing and military advisors from the USA, the harsh crackdowns and human rights abuses by the government were not giving them victory in the civil war, and the need for the army to have armored vehicles was acute.
Back in 1969, a series of trucks known as ‘Rayos’ had been fitted with armor for the invasion of Honduras, and this highly successful strategy was repeated post-1979 for the deteriorating security situation. Wheeled vehicles offered significant advantages over tracked vehicles, not least of which was their availability. With the majority of the fighting being short and of low intensity, wheeled vehicles were able to move much more quickly to where they were needed and had a much lower maintenance footprint than a tracked vehicle. The speed and availability of wheeled vehicles meant that they were a simple solution to the patrolling and protection of roads and infrastructure. Including the 27 M114 conversions, El Salvador produced about 150 armored vehicles in the years between 1978 and 1985, a remarkable achievement for a small and relatively poor country and especially so considering the arms sanctions and security climate.

Trucks converted into armored vehicles included those made by MAN, Magirus, International Harvester, as well as more REO M34/M35A1 2.5 ton utility trucks. Together, these vehicles were no longer ‘Rayos’ but were named after a giant Japanese robot cartoon character and known instead as ‘Mazzinger-Z’s’. 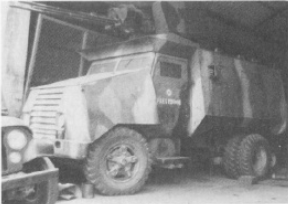 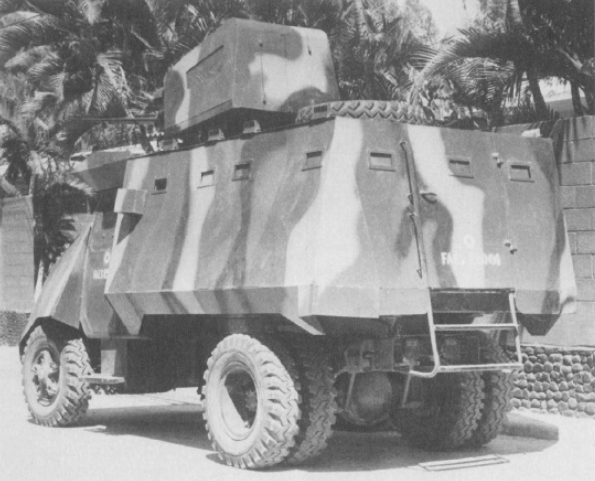 Mazzinger-Z based off an International Harvester-built truck – ‘FAES 12001’. Source: Spencer
One Mazzinger-Z was based on an International Harvester (IH) truck, although initially, it was unarmed. Later, it was fitted with the same type of turret and M55A2 triple 20 mm anti-aircraft cannon as used on the Anti-Aircraft/Armored Personnel Carrier vehicle built by Captain Oswaldo Marenco on the M114 chassis. The truck used large flat steel panels to form the armor, which was slightly tapered upwards from the sides with a very short tapered portion along the bottom of each panel. Four vision blocks were made in each side with three more in the back, including one in the main access door. The vehicle was not open-topped as was the norm with other APCs produced in El Salvador. The cab also featured sloping armor over the engine bay, a steel armored grille over the radiator at the front and bulletproof glass windows in the door and windscreen. 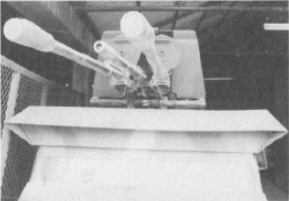 Front view of the turret on the International Harvester-based Mazzinger-Z with 20 mm turret fitted. The triple-barreled M55A2 cannon imported from Yugoslavia was a potent weapon for suppressing ground and air targets alike. Source: Spencer
The MAN truck-based Mazzinger-Z was overall very similar to the shape of the International Harvester (IH)-based vehicle, with a large angular body at the back made from sloping plates tapering towards the top and with a fully enclosed roof. The bottom half of the side plates tapered in sharply under the vehicle. Unlike the IH-based vehicle though, the wheels at the back were covered by angled steel plating and the engine area was much more steeply sloped. The front wheels on both remained unprotected though. 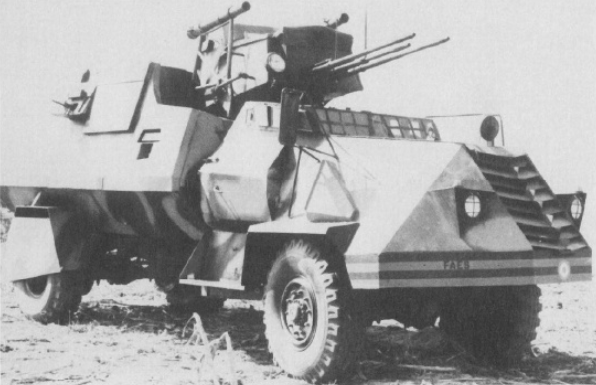 MAN-based Mazzinger-Z with triple 20 mm cannons, a pair of 90 mm recoilless rifles and light machine gun mounts. Source: Spencer
Armament for this MAN-based Mazzinger-Z consisted of the same M55A2 triple 20 mm anti-aircraft cannons fitted in a small turret right at the front of the cargo body and projecting over the cab. The rest of the cargo body portion of the vehicle, which was the troop compartment, raised up sharply behind this turret forming, a high roof on the back of the truck which would have seriously hampered any attempts to fire directly backward. To the sides of this cargo body, though, were two firing ports, one on each side at the height of the cab for soldiers’ weapons, and near the top of the body were two more loopholes (one on each side), each of which was designed to take an HK21 light machine gun. These were not all of the weapons fitted to this vehicle, for attached to the top of the turret on either side were also two 90 mm recoilless rifles which had been cut down to make them shorter and lighter. These would fire with the 20 mm cannons, providing a significant weight of fire against a target, although they could not be reloaded from inside. A crew-member would have to expose himself to enemy fire in order to reload these from the rear.
The Magirus-based vehicles were longer, with an additional axle on the truck, meaning they could also carry more troops as the cargo area was longer. Just like the MAN and IH vehicles, these were armored, although the sides were no longer tapered and were simple vertical plates for the most part until near the top where they would taper in at about 45 degrees to the roof. These angled plates though could be folded down by troops inside for ventilation, visibility, or even to fire from. Visibility for the occupants was mainly provided by four rectangular vision blocks on each side. 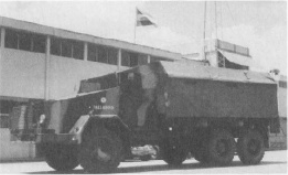 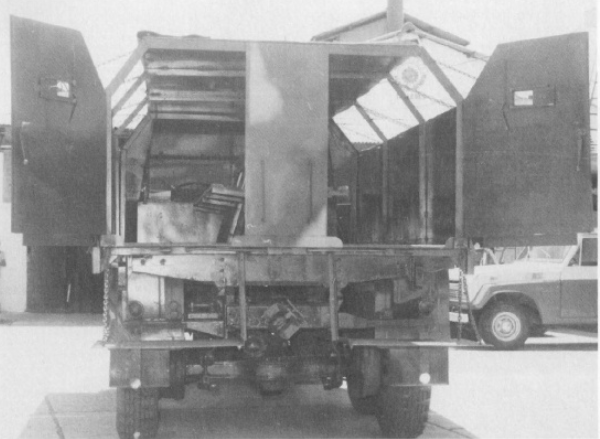 ‘FAES 1305’ – a Magirus-based Mazzinger-Z rebuilt for the third time after damage from guerillas. Source: Spencer
The cab on the Magirus truck was clad in simple flat steel panels and bulletproof glass replacing the windows. Normally, no armament was carried other than the weapons of the troops in the back, although at least one vehicle was fitted with an M60 machine gun and gun shield over the cab. In an attempt to improve protection for the troops in the back, Kevlar sheeting was used to line the bed, providing protection from fragments being blown up from underneath the vehicle. 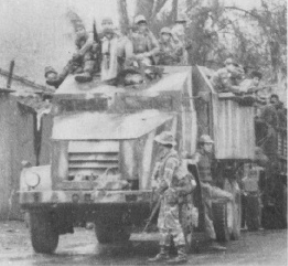 Magirus-based Mazzinger-Z at the head of a column with an M60 machine gun fitted over the cab. The driver stands outside the vehicle and can be seen to be wearing body armor. Source: Spencer
In combat against the guerilla forces, it was common to shoot out the tires of the trucks to immobilize them before attacking them with rocket-propelled grenades (RPGs). Just like the rebuilt M114s, an attempt to counter the RPG threat came from the use of mesh screens placed over the sides and cab of the vehicles, although not all had this feature and the success of it was questionable. 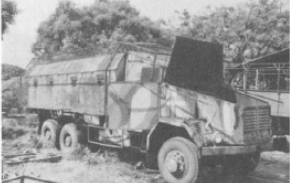 ‘FAES 1496’, a Magirus truck-based Mazzinger-Z with additional side mesh armor in an attempt to counter RPG use. Source: Spencer
At least one Mazzinger-Z vehicle used this same style of cargo body, but with the addition of what appears to be a raised curved section at the top. The cab is crudely armored with a small bulletproof glass window on each side and no protection for the tires. One method which was tried to protect the tires from enemy fire and mine damage was to clad them with tracks taken from M114s, effectively wrapping them in the track links to armor them. It is not known how successful this idea was.

Unidentified Mazzinger-Z with track platted tires carried on the raised roof. This vehicle also appears to have kevlar sheet-reinforced fold-down panels near to the top of the cargo body too. Source: Spencer
Mazzinger-Z’s were mainly used for convoy escorts, protecting against guerilla attacks and for carrying a dozen or more soldiers in the back. Due to the lack of air conditioning in the vehicle, it was normal for those angled side panels to be folded down, leaving the men exposed to enemy fire, although it was standard practice for the driver to wear body armor. 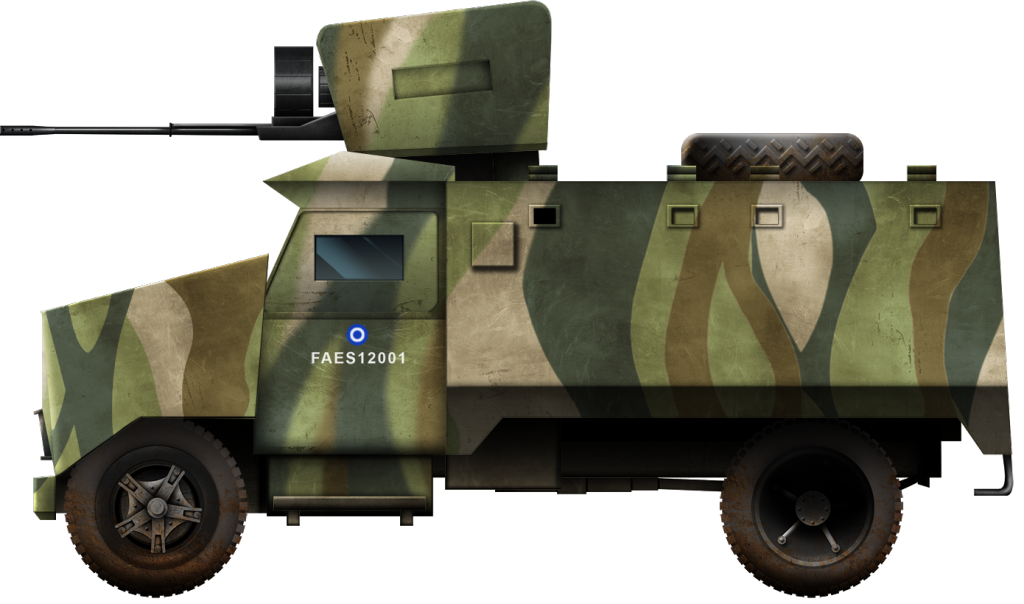 One odd Mazzinger, which stands out from all the others, was not based on a standard truck at all. Instead, this oddity was built off the body of a repurposed 5-ton dump truck. This vehicle was locally created rather than FAES-constructed and was built at a motor pool near Zacatecoluca. 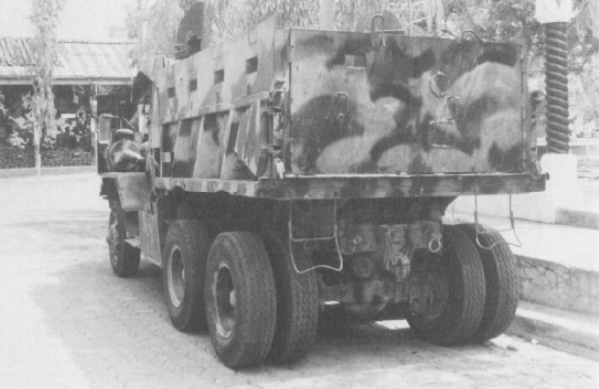 Pictured outside the Engineer’s barracks at Zacatecoluca in July 1991, this vehicle has the words ‘Mazzinger-Z’ written in red over the central light at the front and is painted bright green with black and brown. Source: Spencer
The armor protection for this vehicle was cruder than for the other Mazzingers and had a large armored covering over the cab area and in front of the engine, although it is not known if the sides of the engine bay were armored or not. At the back of the vehicle, the dumper body was already well protected, being built out of steel, and was added to by means of rectangular panels welded over the sides and a large square panel at the back into which a door was made. Three small rectangular loopholes were cut into each side with no flap or bulletproof glass, and at least one more in the back. Armament consisted of the soldiers’ personal weapons and a pair of M60 machine guns, one mounted on each side in the back and protected by a shield. 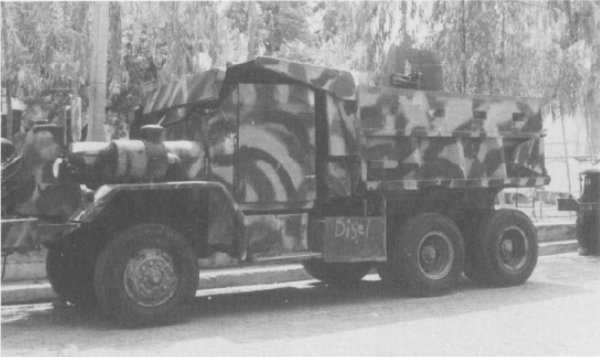 Following a series of engagement with the guerillas with these Mazzinger-Z’s, a second series of vehicles was ordered by 1982. These were smaller than the Mazzinger-Z’s, which had been based on full-size trucks. These new vehicles, named after ‘Astroboy’, another Japanese cartoon character, were instead based off Ford F250 trucks, fulfilling the role of a light armored personnel carrier 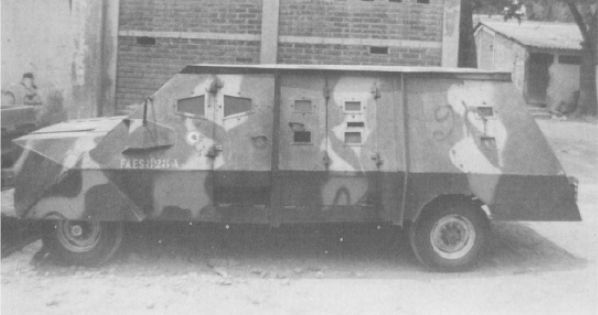 Astroboy Ford F250 based APC pictured May 1987 showing a complete coat of armor over the truck save for the tyres. Source: Spencer 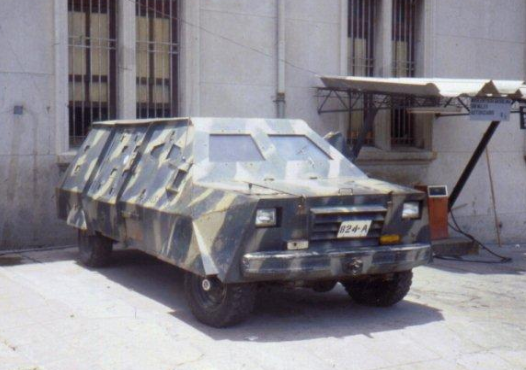 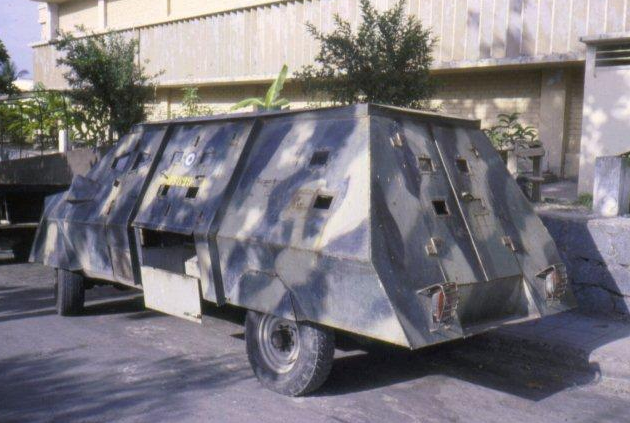 Astroboy Ford F250 based APC. Source: Montes
Approximately 20 such vehicles were produced and there was significant variation amongst them. Astroboy ‘828A’, for example, had a fully armored body made from sloping sides front and rear and a covered roof. The sides had multiple bulletproof glass portholes and four large rectangular doors and the vehicle was used as a mobile command post. 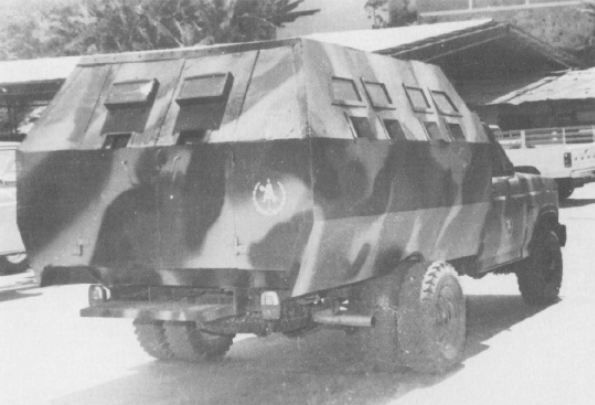 Astroboy used by the Atlacatl Battalion. Note the addition of double tires at the back to take the weight of the troops and armor being carried. Source Spencer
Another known ‘Astroboy’, though, had no armor at all on the truck cab, with only the body at the back protected by a large angular welded body. Inside here, the soldiers could use four bulletproof glass windows in each side, below which was a firing portal, and two more in the back. The soldiers here would be able to fight from behind the protection of the armor, although the driver would be exposed with no protection. An odd choice considering the complete protection provided for ‘828A’ which was only for use as a command post rather than direct combat.

The Mazzinger and Astroboy vehicles came about at a time of great wheeled military vehicle shortage in El Salvador. On the whole, they were quite well designed, showing that a lot of thought had gone into the construction of the various armored bodies, especially considering the scarce resources available at the time and limited production facilities. These vehicles saw much service, conducting patrols and convoy escorts, although finding accurate accounts of their use is limited. None of these vehicles are currently known to have survived.