Ernst Mahlkuch is not a name synonymous with tanks or armored vehicles, yet he designed an armored vehicle at the height of pre-war Nazi Germany. He designed this vehicle not as the product of a ‘crack-pot’ inventor or an otherwise-untrained engineer, but from the mind of a very competent engineer and one who would amass dozens of patents and designs in his name for a variety of ideas, from flour-weighing equipment to wood-gasifier units for vehicles.
Whilst those designs were well considered and based on some expertise in the field, his idea for an armored vehicle for soldiers was far less well-considered, never received any interest and has, until recently, been forgotten by history. As a product of Nazi Germany, this armored vehicle certainly lacks the presence of the Maus, the fame of the Tiger, or the utility of the half-track, but his design does follow a common trait – an armored vehicle with a low silhouette with the intention of protecting the otherwise unprotected infantry during the attack.

Ernst Mahlkuch, a German national from Post Klützow, Pomerania, (now part of Poland) was an engineer who specialized in industrial machines used for moving and filling bags, balances, and other machines, from the early 1900s and through WW2. Ernst Malhkuch’s family connection to the mill-industry and the Greif mill at Klützow had started with Joann Mahlkuch in 1734 as a miller, producing very high-grade flour. Although the original Greif mill (Greifenmühle) itself dated back to 1100, after the mill burned down in 1891 (a common problem for flour-mills), it was rebuilt and modernized, with Ernst Malhkuch assuming charge of the business. By the outbreak of WW1, Mahlkuch‘s business took a hit with its horses and a lot of the workers taken away for the war effort and with the firm renamed Reichsgetreidestelle (Imperial Breadstuff’s Commission). 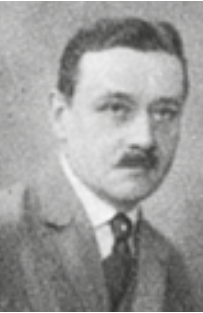 Ernst Mahlkuch, mill owner. Circa 1908. Source: Velopack
The firm survived WW1 and, in its aftermath, Malhkuch continued to expand the business with the purchase of electric vehicles in 1920. A second major fire in 1933 destroyed the plant, leading to another rebuild and modernization in 1934.
By 1938, the firm was renamed ‘Greif-Werke’, based in Klützow, and was fully operational by 1941. By the end of WW2, Mahlkuch’s plant had fallen on the wrong side of what was to be the east/west divide and he restarted his mill business in the city of Lübeck instead. The firm changed name one more time in 1997 to Greif-Velox and today is still in operation, making fill-line production systems for industry as Velox Industrial Packaging Systems Inc.

Quite how or why a man fluent in the engineering of flour and milling machines came to take an interest in armored vehicles is unclear. When this vehicle design was submitted in 1938, the Nazi war machine had already consumed Czechoslovakia and was busily eyeing up Poland. It would be no surprise, therefore, to imagine that, in a heightened time of conflict, an engineer might consider ways in which he could help his nation to victory.

The rather uncomfortably prone crew of Mahlkuch’s design illustrates well one of the numerous problems inherent with this type of design. Source: German Patent DE687780

Mahlkuch is clear that his armored vehicle was for either just one man or a crew of not more than two. One man would, after all, have to manage the steering, propulsion, command, and fighting power of the vehicle. This was an overwhelming task which was the downfall of a lot of one-man tank designs. As a two man vehicle, this machine would have one man act as the commander and driver, able to observe the enemy and direct the vehicle to where it needed to go, with the second crew-man as the gunner and loader.
In his patent application drawing, Mahlkuch only drew a single operator within the machine, carrying what looks like a fat rifle, but is described as a machine gun. It is safe to assume, therefore, that whether the vehicle was a one or two-man machine, its only armament would be a single forward-firing machine gun.

Illustration of Mahlkuch’s Armored Cover made by Brian Gaydos, funded by our Patreon campaign.

In common with many one-man tank designs, the layout consists of the occupant lying prone, facing forwards and controlling the steering and propulsion of the vehicle with their feet (their hands being occupied operating the weapon/s). The engine, mounted at the back, was cooled by means of a fan, mounted externally, driving air over the radiator mounted above it. Both the fan and the radiator were exposed at the back and not shown to be covered by the armor of the vehicle.
As expected from a vehicle in which the operator would lie flat, it has a very low profile. It was not more than 600 mm high from the ground according to Mahlkuch, meaning it could conceal itself within long grass. This would also have the significant disadvantage that the driver could not see ahead of the vehicle and very easily drive into a wall or ditch with little or no warning.
Propulsion along the ground is more complicated though, as Mahlkuch shows one system using 4 large 8-paddle wheels about 400 mm high on each side. With little or no ground clearance, these paddle-wheels, described as “shovel-like grippers”, would drag the vehicle over the ground. The floor of the vehicle was smooth, acting as a skid, reducing the friction with the ground and providing floatation on soft ground, but it also meant that the vehicle could easily become stuck on something as simple as a tree-stump. These paddle-wheels were seen by Mahlkuch as providing an advantage over conventional tracks, as they permitted a much more silent approach. The engine was well silenced too, as a covert approach was seen by Mahlkuch as being tactically advantageous.

Top-down view of the arrangement of the vehicle from Mahlkuch. The drive is at the back, supplied by the rear-mounted motor. Source: German Patent DE687780

No armor thickness or level of protection is specified, but he was clear that this machine should be armored. In order for the armor to have any value against even bullets, it would have to be at least 6 – 8 mm thick. The armor was well rounded increasing the likelihood of deflecting an incoming bullet, a simple way of improving the protection offered by even thin steel plate and was also made with just a single seam, ensuring that no splash could get between the joints in the armor. The single seam in question was the joint between the top and bottom halves of the machine, as it was to be made in just two pieces, with each stamped from a sheet of steel and then attached together. A single, small armored flap was provided in the roof of the vehicle for the operator/s to enter/exit and for ventilation.

To make the vehicle easy to haul around in between actions, a two-wheeled trailer towed behind another vehicle was envisaged. The range of the vehicle was low in of itself, so would be reliant upon a tractor vehicle to tow it around to a gathering point from where many such vehicles could then be deployed en-masse to attack the enemy.

Ernst Mahlkuch had clearly given the design a lot of thought. He wanted to overcome traction problems over the ground and to also make the design simple to manufacture, operate, and transport. Well shaped to deflect bullets and with a very low profile, the design could be seen to maximize the survivability of the soldier/s operating it, but it was a fundamentally flawed concept. Just as with so many other vehicles in this style, the crew would have little or no visibility, could easily become stuck, and were limited in offensive potential to the front, even though they may not be able to see where they might have to fire. Trapped within this low steel box, the crew would have little chance to effectively deliver fire on the enemy, as there was no provision made for firing to the sides and the noise/heat in such a small and stifling space would have been extremely unpleasant. The idea was not adopted by the German military, but it was accepted as a patent. Mahlkuch had filed the application on 9th April 1938, just one month after German troops had occupied Austria. It was approved on 11th January 1940, by which time Germany was already at war with Great Britain and France. No examples were ever made.

Weird, but interesting wondering how it would perform