Carriers were a series of utility vehicles produced during the Second World War. They fulfilled a number of roles including troop transportation, reconnaissance, and towing guns. Though perhaps thought mundane compared to other armored vehicles, Carriers were the backbone of the British Army in the war. They even found use throughout the forces of the Commonwealth and the American Military. Captured examples were also used by the Germans. The Universal ‘Bren’ Carrier, perhaps the most famous of these light vehicles, still holds the record for the most produced armored vehicle of all time at around 113,000 built.

The Loyd Carrier, officially the ‘Carrier, Tracked, Personnel Carrying’, was designed by Captain Vivian G. Loyd (1894-1972) in the late 1930s. It was not his first foray into armored vehicle design. Loyd had previously worked with Sir John Carden on the famous Carden-Loyd series of Tankettes. 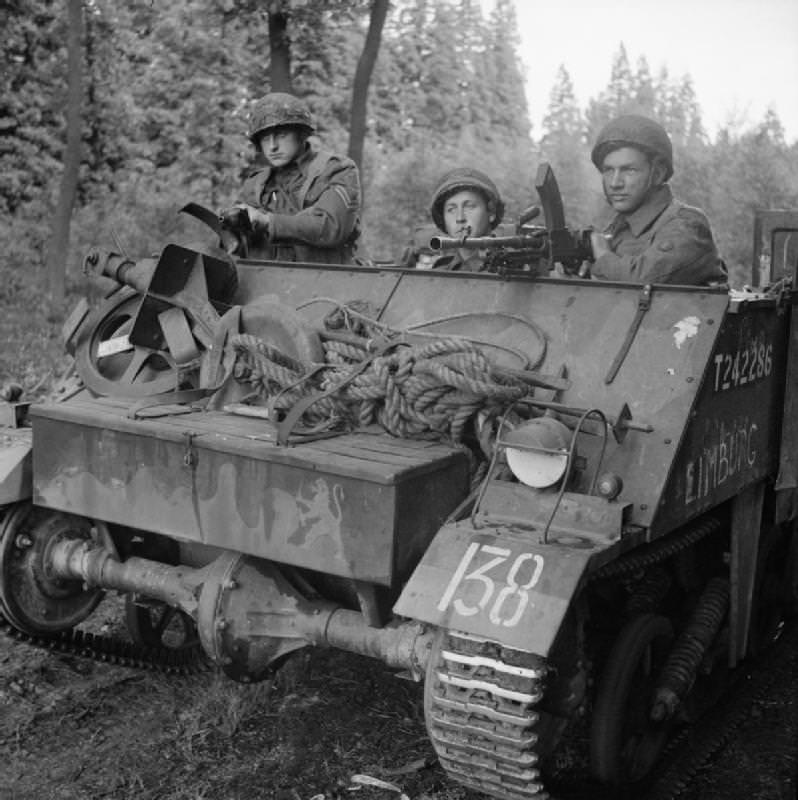 The Carrier was part of a rapid-development program, so many of the carrier’s components were borrowed from other vehicles. The vehicle was designed around the drive systems of the 15cwt (0.84 US ton, 0.76 tonne) 4×2 Fordson 7V truck. This included the engine (an 85hp Ford V8 Side-valve), gearbox, transmission, and front axle. The track, drive sprockets, and suspension units were all taken from the Universal Carrier.
The chassis was also borrowed from the Fordson truck. Mild steel bodywork was added. A large, sloped, 0.27 inch (7 mm) thick armored plate (known as the ‘BP Plate’ in Loyd’s manuals) was placed at the front of the vehicle via bolts at the front and on the sides of the hull. This was enough to deflect small arms fire. Due to the sloping, it was also a little more effective than the flat structure of the Universal Carrier for example. A long stowage box was often placed in front of this sloped plate, above the exposed front axle. Pioneering tools were then stowed atop this box, with spare wheels stowed on the glacis.
The upper hull was enclosed at the sides and front but was open at the rear without a roof. This was not seen as an issue as the Carrier was not a fighting vehicle and, as such, did not need extensive protection or armament. A single Bren Light Machine Gun was sometimes carried for defensive purposes. There was an option to attach a canvas roof to protect the occupants from the elements. This was supported by a three-piece framework.

The Ford V8 engine was located at the rear of the Carrier, with the radiator behind it. The engine was located centrally at the rear, in a box-like structure. Passage into the crew compartment could be gained on each side of the engine. The drive shaft took the power from the engine forward to the exposed front axle, to which the sprocket wheels that drove the track were attached. Steering was simple.
Both the drive wheels and idler wheels (which were also sprocketed) were fitted with brakes for steering. Steering was not as complicated as the track-bending method of the Universal Carrier and instead was actuated by means of the steering tillers in the driver’s position. Braking the left track would turn the vehicle left, and vice-versa.
The suspension was of the Horstmann type, consisting of two double-wheel bogies mounted at the center of the vehicle. Single rollers were mounted atop the bogies to support the return of the track.

There were three types of Loyd Carrier, all identified as ‘Numbers’. The only major difference between these was the engine type. The rest of the vehicle remained unchanged. There were also two ‘Marks’ with different braking systems. The vehicles were used in multiple roles during the War, all with their own designations.

Tracked Personnel Carrier (TPC): Troop carrier variant. Able to transport 8 fully loaded troops or equal weight in cargo. Equipped with internal seating for troops, as well as seating on the track guards. Armor surrounded the entire compartment.
Tracked Towing (TT): The most produced variant of the vehicle. Predominantly used to tow heavy armament, such as the Ordnance ML 4.2 inch Mortar and the Ordnance QF 2 and 6 Pounder Anti-Tank Guns, as well as carrying their respective crews. It was equipped with four seats for the gun crew, and ammunition stowage on the track guards. Armor was only found on the front quarter of the variant. For a short time, this vehicle had its own unique title of ‘Tractor Anti-Tank, Mk. I’ 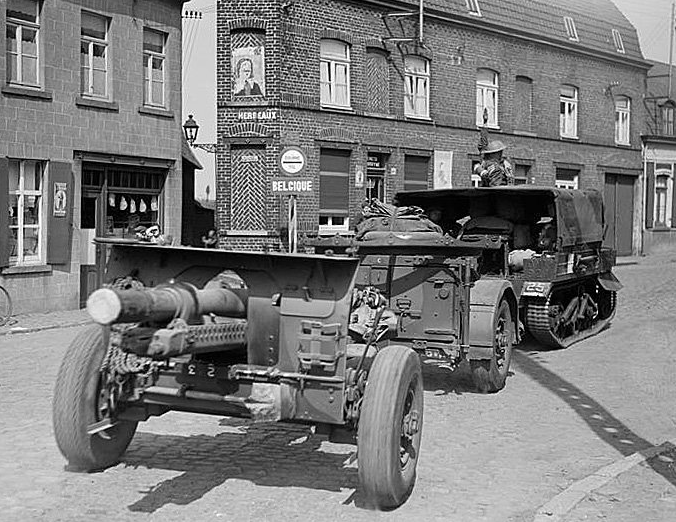 Loyd Carrier used by the British Expeditionary Force in Belgium, 1940. Photo: RG Poulussen
Tracked Cable Layer Mechanical (TCLM): A variant used exclusively by the Royal Corps of Signals (RCS). It carried a large spool of telegraph wire. The vehicle was un-armored.
Tracked Starting and Charging (TS&C): A support vehicle to armored regiments. Used to charge flat batteries and help start tank engines. It was equipped with 30 and 12 volt DC dynamos driven from the gearbox. It also carried spare 30-volt, 300 amp/hr battery units. The vehicle was un-armored with the charging unit positioned against the hull plates on both sides. These vehicles were often nicknamed ‘Slaves’.

Illustration of the basic Loyd Carrier.

Illustration of the Loyd Carrier with canvas roof erected.

Both of these illustrations were produced by Ardhya Anargha, funded by our Patreon campaign.

The prototype vehicle was tested by the Army in late 1939. An initial order of 200 vehicles soon followed. Production started at Loyd’s own company, Vivian Loyd & Co. In later years, production moved to larger firms, including the Ford Motor Company, Wolseley Motors, Dennis Brothers Ltd, Aveling & Barford, and the Sentinel Waggon Works. In total, 26,000 Loyd carriers were built from 1939 to 1944.

Early in the War, the TT and TPC variants were used extensively by the Royal Engineer Chemical Warfare Companies. However, most of Chemical Units were disbanded or re-purposed by 1943 to free up their 4.2-inch mortars for the regular infantry. The carriers were then assigned to units equipped with the Mortars.
The TT variant was the most common of the Loyd Carriers and was deployed in the largest numbers. From D-Day onwards, they were used to tow weapons like 6-Pounder AT guns from battlefield to battlefield. They saw action throughout the fighting in Normandy, and even in the famous Battle of Villers-Bocage.

A Loyd Carrier TT towing a 6-Pdr Anti-Tank gun passes a knocked out Panther. Photo: themodellingnews.com
In service with the Royal Electrical Mechanical Engineers (REME), the carriers were often paired with Caterpillar D8 tractors for tank recovery. The Carrier was used to carry spare parts and recovery apparatus.

Like most of the carrier vehicles, the Loyd continued to find use after the Second World War in other armies. The Belgian, Danish and Dutch armies purchased Loyd Carriers from the British. Sources suggest that the vehicle remained in service with the Belgian army as late as 1963.
The Belgian Army also created their own variant of the Loyd Carrier. This was the CATI 90 (canon antitank d’infanterie 90mm). The 90mm Gun was produced by MECAR and was designed to combat armored targets. It could also fire HE (High-Explosive) rounds in an infantry support role. The gun was mounted centrally in the vehicle, with the barrel protruding through the frontal plate. It was in operation between 1954 and 1962, and operated with another Loyd Carrier in an ammunition carrying role. 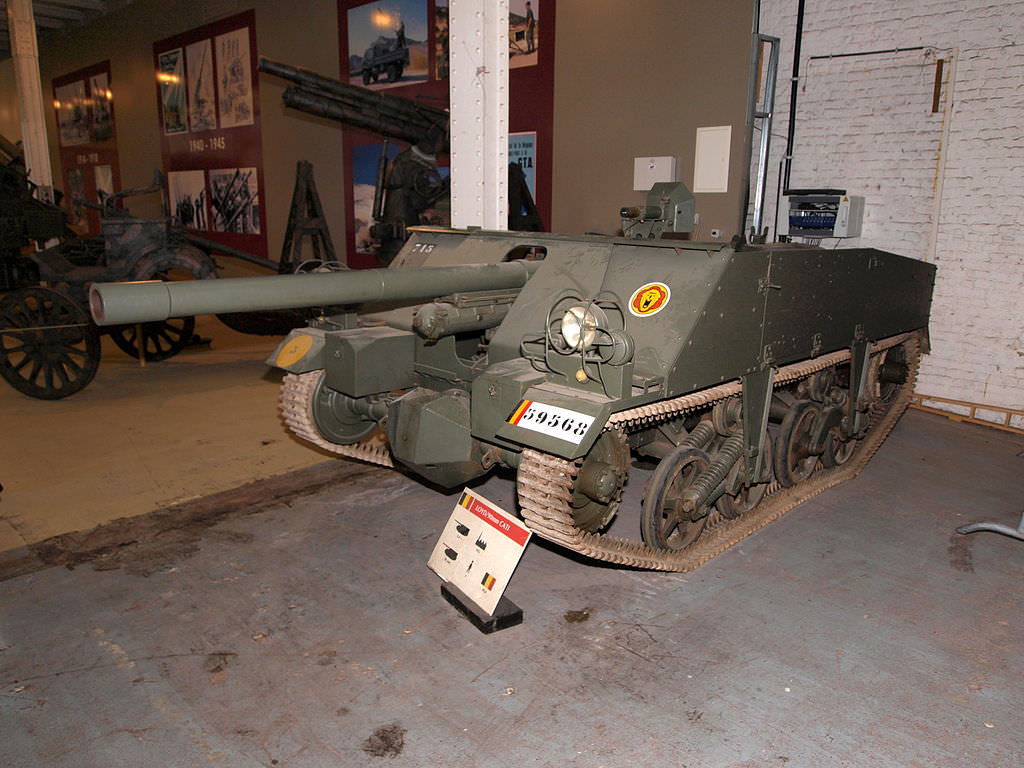 SPAAG
There was an attempt to develop an Anti-Aircraft vehicle on the Carrier. This consisted of mounting four-to-six Bren Light Machine Guns at the front of the vehicle on a gimbal that could elevate to point skywards. The vehicle was never mass produced.
SPG
A slightly more elaborate conversion was the attempt to introduce the 25-Pounder field gun to the chassis. The crew compartment was completely removed and the gun introduced directly onto the bare chassis. A second vehicle carrying just ammunition would have worked with it. The recoil of such a powerful gun on such a light chassis would no doubt have caused the vehicle to react violently. This variant was never mass produced. 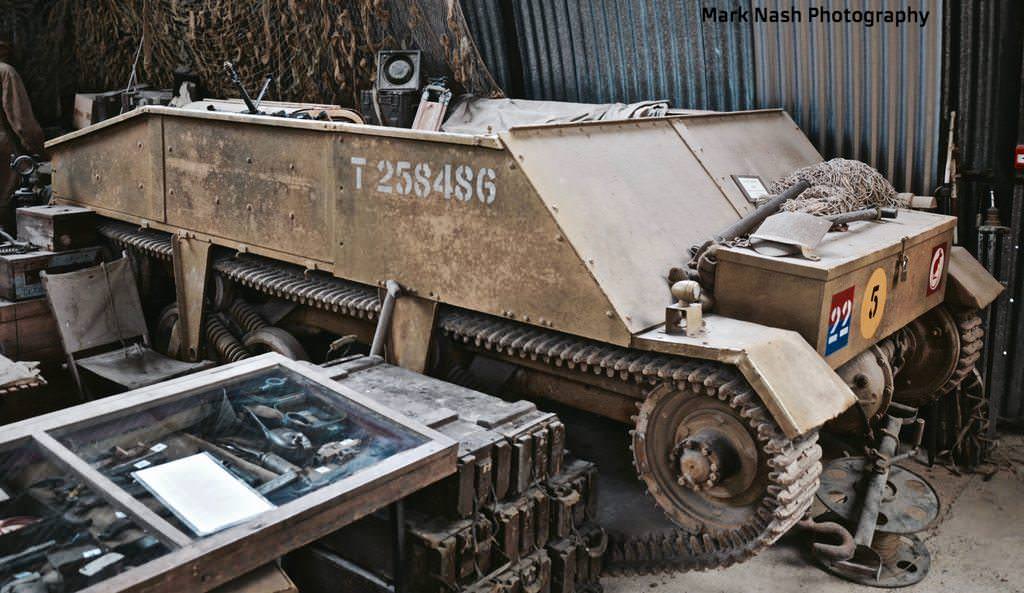 Interesting article, always nice to read about the more obscure Belgian anti-tank adaptations of British tractors. One can clearly notice the similarity in concept with the T13 B1 and B2, derived from various Vickers-Carden-Loyd tractors in the pre-war period.
One question though, for what purpose do the Loyd Carriers in the drawings carry what seem to be rubber tires on their front glacis? Spare tire for their towed gun/mortar perhaps?

Yes, for guns and trailers
https://i.imgur.com/lWFsrk8.jpg

very interesting as i own one complete with a 6 pdr anti tank gun its nice to know someone knows about them as so many people think its a Bren gun carrier when actually its bigger. and great photos
Thanks

My father drove a (Loyd) carrier while serving in the Dutch army in the Dutch Indies (1947 – 1949). In his diary he mentions a ‘wipped’ carrier. I tried to find references on the internet but could not find any. I do not know if it is a Dutch or English expression and if there may be a spelling error. I also tried variations like whipped and whippet, but still no luck. Any chance you could shed some light on this ?

Couple of observations, the “spare wheel” carried on the front was a road wheel of the carrier itself. They had a solid rubber tyre. The photograph of the BEF carrier towing the 18/25 pounder, the vehicle in the photo is actually a Light Dragon MkII. A close look at the photo shows the box shaped fitting on the front which housed the headlights.

OOPS sorry, yes they did carry a spare for the 6 pounder gun. Should have looked properly…..sorry. (George).