In the late 1970s, the Irish Cavalry Cavalry Corps (Irish: An Cór Marcra) decided to retire their small fleet of Comet tanks purchased from Great Britain in 1958. These Second World War tanks had served well with the Cavalry corps, but by this point were on their last legs with constant breakdowns and a lack of spare parts. A replacement was required that shared the same qualities; mobility and firepower.
In the early 1980s, such a replacement was soon found in the shape of the compact, highly mobile and air-deployable light tank, the British FV101 Scorpion CVR(T). The Scorpion would be the first tracked vehicles purchased by the Defence Forces of Ireland (IDF. Irish: Fórsaí Cosanta, officially: Óglaigh na hÉireann) since those Comets some twenty years prior. They became the last tracked vehicles in operation, and also the last vehicles to be bought from Great Britain. 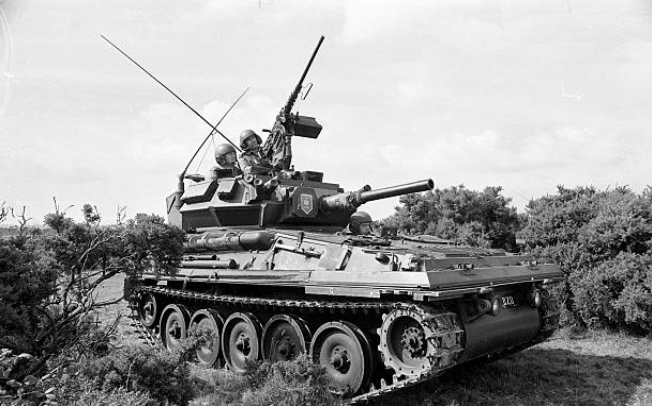 Scorpion in training on the Glen of Imaal. It is an earlier example, signified by the .50 Caliber machine gun mounted on the roof. Photo: Getty

The officially named FV101 Scorpion Combat Reconnaissance Vehicle (Tracked) was designed by the Alvis Car and Engineering Company Ltd in the early 1960s. After a long trial period, the Scorpion entered service with the British Army in 1970. It was a three-man tank, with a crew consisting of a Driver, a Gunner, and a Commander.
Mobility was the Scorpion’s strong point. It was powered by the 4.2 litre, 6-cylinder, Jaguar J60 petrol engine. Usually, this engine produced 269 hp but was de-rated down to 198 hp for military use. This power plant could propel the tank to a top speed of 50 mph (80 km/h). This top speed allowed the tank to gain a Guinness world record for the fastest production tank (It was recorded doing 51.10 mph (82.23 km/h) at a test track on the 26th of January 2002). It used a ‘flat track’ suspension (track return supported by road wheels, as used on tanks such as the Soviet T-54) with five road-wheels. The idler wheel was at the rear while the drive sprocket was at the front.
For a small tank, the Scorpion’s armament was rather potent and consisted of the Royal Ordnance 76mm L23A1 Gun. This gun could fire a range of ammunition including HESH (High-Explosive Squash Head) and Canister. Secondary armament consisted of a coaxial 7.62 machine gun. Maximum armor thickness was 12.7 mm (0.5 in).
Although removed from service in the British Army in the late 1990s, the Scorpion and its variants remain in service across the globe. It can also be found in the arsenals of Bolivia, Indonesia, Chile, Thailand, and many others.

The Scorpion’s small size, good speed, and a relatively potent gun made it an attractive vehicle for the Irish Defence Forces’ Cavalry Corps. Subsequently, the Irish Military purchased a total of 14 of the tanks between March 1980 and December 1985. The numbers were thus: 4 in 1980, 4 in 1981, 4 in 1982, 2 in 1985.
The Scorpions were delivered in their standard British configuration armed with the 76mm L23A1 and equipped with wading gear that was soon removed. The 76mm gun proved to be somewhat of a problem as there was no fume extractor. When the gun was fired the turret compartment would fill with smoke and fumes. Should the gun be fired with turret closed down, the effect was even worse. One way the British and other armies dealt with this was by removing the 76mm turret and replacing it with the turret of the FV107 Scimitar armed with the 30mm Rarden Cannon. The Irish Military, on the other hand, wanted to keep the larger caliber 76mm. As such, they developed their own fume extraction system (FES) which kept the tank safe to operate. 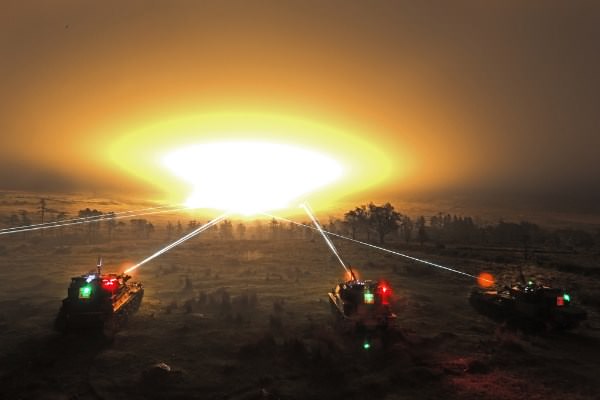 Scorpions conducting a night shoot on the Glen of Imaal. Photo: IDF Archives
Scorpions assigned as Troop Commander’s tanks were originally equipped with a .50 Cal Browning M2HB heavy machine gun on a pintle mount upon the turret roof. These were later replaced with a 7.62 GPMG (General Purpose Machine Gun) as the .50 increased the silhouette of the Scorpion.
The Scorpions entered service with the 1st Tank Squadron in March 1980 and were used primarily in an armored reconnaissance role. This is the combination of infantry based recon with the support of armor. The FV101s remained part of this squadron until 1998, when the 1st Tank Squadron ceased to be a separate body, and became a part of the 1st Armored Cavalry Squadron (1 ACS). They were based at Curragh Camp, Kildare.
A standard camouflage pattern of black, brown and green was applied to the tanks, including the wheels in some cases. Unit markings were applied to the mantle on the right of 76mm barrel.
Over the course of their service, the Scorpions have taken part in many training exercises at the Glen of Imaal (Irish: Gleann Uí Mháil), in the Wicklow Mountains. 5,948 acres of the Glen has been used as an artillery and gunnery range since 1900. The vehicles also took part in a number of public and military parades.
In 2004, Seven Scorpion tanks were stationed as a ‘Guard of Honour’ at Shannon Airport, County Clare for a visit by the then serving US president, George W. Bush.

Irish FV101 Scorpion, showing the camo pattern that included coverage of the road wheels. Illustration by Tank Enyclopedia’s own AmazingAce, based on work by David Bocquelet.

The Scorpions stayed in service for 37 years, only being stood down in 2017. The role of the tank has largely been taken over by Ireland’s main armored vehicle, the wheeled 8×8 MOWAG Piranha IIIH, 80 of which have been in service since 2001. 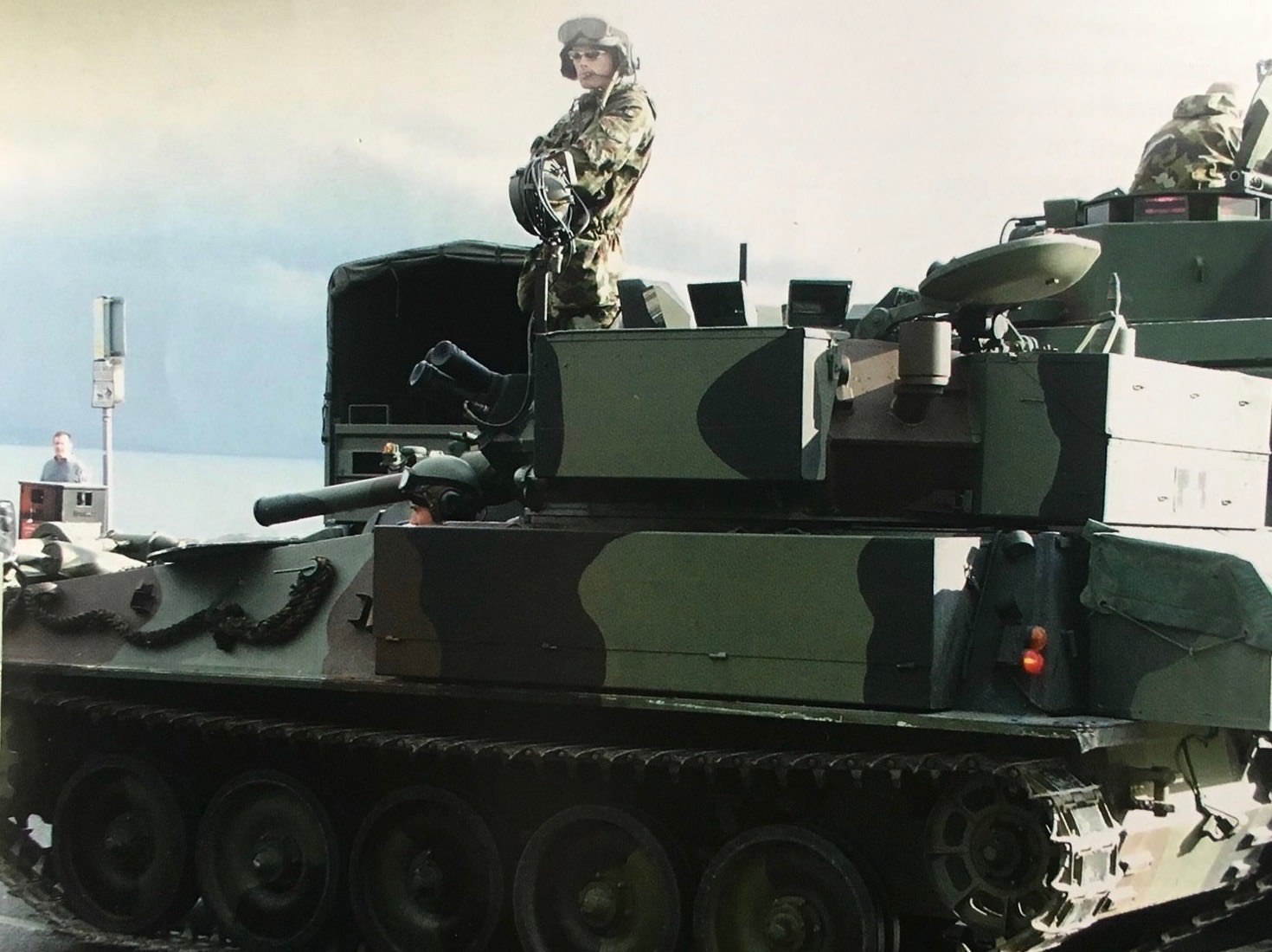 Irish Scorpion taking part in a military display in June 2007, it is parked next to its successor, the Piranha III. Note the two-tone camo on the road wheels. Photo: Paul McMenamin 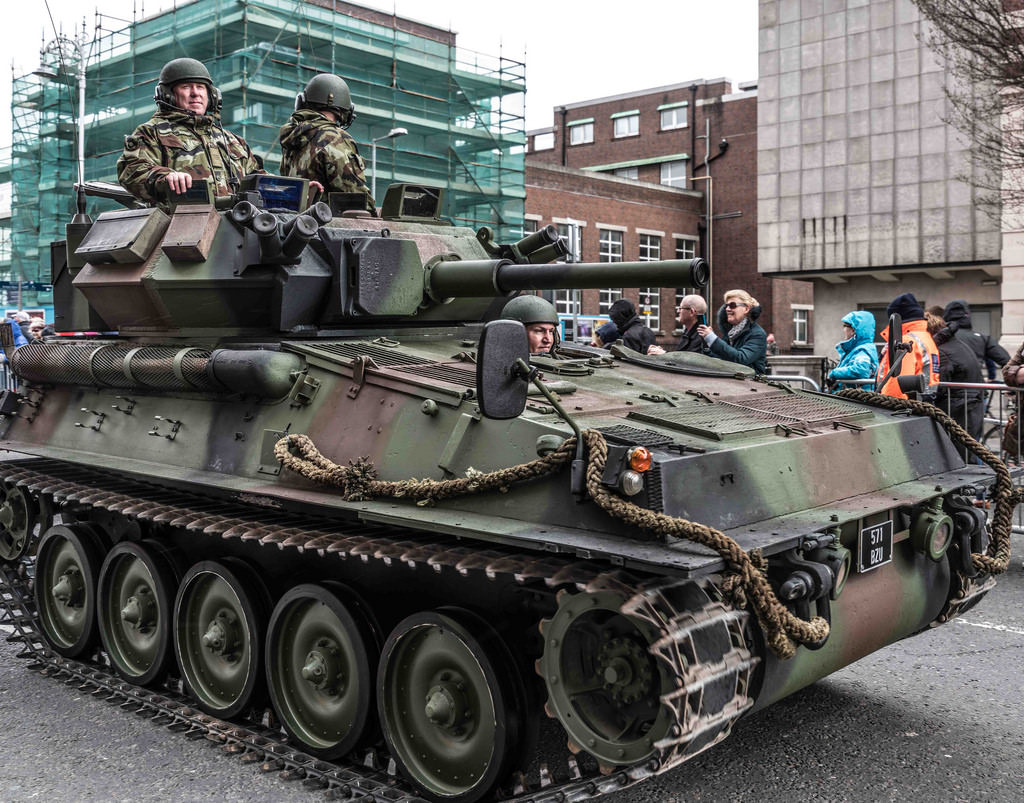 A Scorpion taking part in an Easter Sunday parade in 2016. Photo: William Murphy

We never really bothered about the smoke from the gun. It smelled rather pleasant – a sort of nutty flavour. However, wherever the smoke coated any painted/metal it attracted a lot of humidity and so the inside of the turret was sometimes coated in fine water droplets after a shoot in humid weather. The same went for the Saladins which had the slightly heavier 76mm gun, and fired the same ammo.
(Perhaps we were all a bit high after a day on the ranges !!)
I went over to Dublin to talk to the Irish Army about upgrading their CVR(T) fleet in about 1995/96 but it did not come to anything at the time.
The HESH round is very under-rated. It was one of the best anti-armour rounds for light armoured vehicles. It was quite capable of destroying any tank in the ’70s and ’80s with a hit on the side armour. It is not so good against modern armour packs such as spaced, ERA and “Chobham” of course.

Thank you for the response, Sir!
– TE Moderator

Are this scorpions still in service in Ireland?