Militarily speaking, the Republic of Ireland is officially a ‘non-aligned state’. This means that the country is mostly neutral but it will engage an enemy if necessary, or if the country is threatened. The Republic of Ireland is, however, an extremely active member of the United Nations (UN), and has taken part in numerous UN peacekeeping missions.

In the early 1960s, Irish Troops, under the UN flag, fought with distinction during the Congo Crisis as part of UNOC (United Nations Operations in the Congo). It was during this time that the Irish would get a chance to utilize a small number of the ubiquitous American Armored Personnel Carrier (APC), the M113.

The M113 is one of the most famous armored personnel carriers ever built and continues to serve in not only the US Military but also in the inventory of many of the world’s militaries. The vehicle has been in service for 60 years, making it one of the longest-serving armored vehicles in history.

Developed and built by the Food Machinery Corporation (FMC), the M113 is a basic vehicle, little more than an armored box on tracks. It is 15 ft 11.5 in (4.8 m) long, 8 ft 9.7 in (2.6 m) wide, and 8 ft 2 in (2.5 m) tall. The vehicle’s structure is almost completely fabricated from aluminum, including the armor, which is between 0.4 and 1.4 inches (12 – 38 mm) thick. The vehicle started out with a Chrysler 75M petrol engine, although this would later be changed to a General Motors 6V53 diesel type. The power plant is located at the front of the vehicle, along with the transmission. The vehicle is supported by torsion bars connected to five road-wheels. The idler wheel is at the rear with the drive sprocket at the front.

The Congo Crisis (also known as the Congo Civil War) was a period of political unrest and violence which began in the Republic of Congo (the largest country in the center of the African Continent) in 1960. It began soon after the country gained its independence from Belgium.

In June 1960, Belgium negotiated mining rights with the future independent ‘Democratic Republic of the Congo (DRC)’. Within days of this, Congolese troops mutinied, demanding increased pay and removal of white officers. Belgium launched a military retaliation, resulting in the rebellion of more Congolese troops. Then, with Belgian support, Katanga seceded from the DRC. Congolese President Joseph Kasavubu and Prime Minister Lumumba asked and received a peacekeeping force from the United Nations (UN).

Five years of conflict would follow this, eventually resulting in the rise of the Democratic Republic of Congo under the rule of a dictator, and 100,000 deaths. This was also a proxy war between the USA and USSR. Both super-powers were supporting opposite sides during the conflict; the Congo was sympathetic to the Soviets, while the US favored the Kantangese due to its mineral exports, one being Uranium.

Irish troops arrived in the Congo between 1960 and 1961. Their most famous engagement during the conflict was the Siege of Jadotville on September 13th, 1961, when “A” Company, 35th Battalion (UN service) of the Irish Army UNOC contingent was attacked by Katangese forces. Despite a valiant, four-day stand, the Irish troops were overwhelmed. Remarkably, no Irish troops were killed in the battle, although they were all taken prisoner for a month.

There were other Irish engagements during the conflict, such as the Ambush at Niemba in November 1960, and the Battle of the Tunnel in December 1961. A total of 6,000 Irish troops served in the Congo from 1960 to 1964. Of this number, 24 men lost their lives.

The story behind Ireland’s procurement of the M113’s is not very well documented. While in the Congo, the Irish Contingent obtained six M113s. Allegedly, these vehicles were US Army vehicles, donated to the UNs armored vehicle inventory sent to the Congo. It is from here that the vehicles were subsequently loaned to the Irish. It is unknown as to when the UN received these M113s but it would have to have been after 1961, as that is when the vehicles first entered service with the US Military. The Congo Crisis, therefore, may well prove to be one of the first combat deployments of the M113. When the Irish deployment came to an end in 1964, the vehicles were returned to the UN inventory. The Irish would never use the M113 again, although it would become a staple UN vehicle.

The M113 would have been a quantum leap compared to what the Irish Military was used to at this time. It was the only tracked APC to ever see use by the Irish. The only previous experience the Irish had with a tracked APC-like vehicle would have been the long-outdated Universal ‘Bren’ Carrier which was, remarkably, only just leaving service with the Irish at the time of the Congo Crisis. The M113 was a far cry from the only armored vehicles that Irish Military deployed in the Congo, the archaic Ford Mk. VI Armoured Cars which had been in service since 1941. These were little more than Ford commercial trucks up-armored by the Irish military, who also installed a machine gun turret.

Due to a lack of photographic and literary records, it is unknown what markings would have adorned the M113s or whether it was even painted white like most UN vehicles. It is known that the US markings were painted over. There is no evidence to suggest that the Browning M2 .50 Cal (12.7 mm) machine gun being installed, though a .30 Cal (7.62mm) may have been.

The six M113s utilized by the Irish Contingent would be the only time an American-built combat vehicle would be used by any element of the Irish Military. The Ford Armoured Cars, despite their archaic nature, served the Irish well in the Congo. They may just have been little more than up-armored trucks with a mounted machine gun, but they were more than capable of dealing with an enemy armed almost exclusively with small arms and no heavy, or anti-tank, weaponry.

The blend of mobility and armor protection granted by the M113 were unparalleled by anything in Ireland’s own arsenal, which was still full of outdated vehicles such as the Universal Carrier and Comet tank. It wasn’t until 1972 that the Irish Military would have a modern Armoured Personel Carrier. This came in the shape of the wheeled 4×4 Panhard M3 VTT (Véhicule de Transport de Troupes) armored personnel carrier, a wheeled vehicle built by the French. 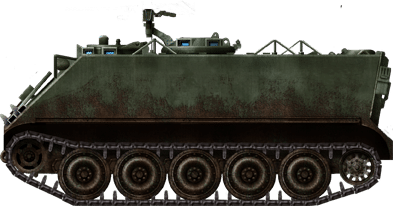 The American M113. It is unknown what markings adorned the vehicle while it was in Irish use. All that is known is that the US markings were painted over, and the vehicle was without its Browning .50 Cal (12.7mm) Machine Gun. Illustration by David Bocquelet, modified by Leander Jobse.