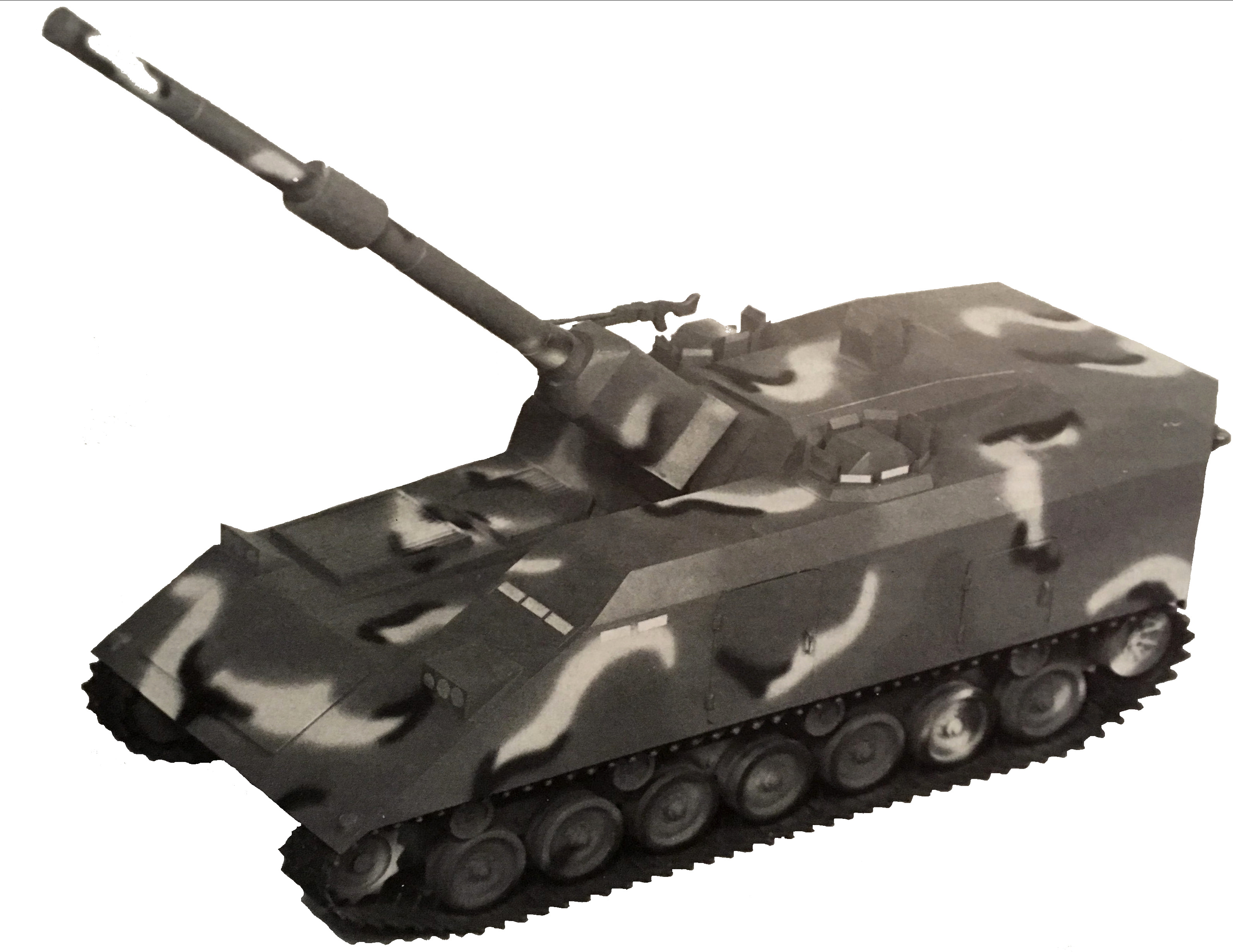 The United States had, by the 1970s, realized that the majority of their artillery was aging rapidly or just out of date. Open topped, slow, vulnerable, based on obsolete chassis, the existing self-propelled guns (SPG’s) in service were not suitable for a potential Cold War showdown with the Soviet Union, which had a more modern SPG force. Early development work took place under the program names Division Support Weapon System (DSWS) and Direct Support Armored Cannon System (DSACS). The DSWS had changed by 1979 into the Enhanced Self-Propelled Weapons System (ESPWS) program with the goal of producing a common platform for self-propelled artillery for the Army.

All of these programs were also grouped under the general name of the Howitzer Improvement Program (HIP). This development was to take multiple strands. One was work commissioned from the firm of Norden to study improvements to the existing M109 fleet as well as an examination of foreign systems in use or development. This included the French GCT and the multinational SP-70 project. The M109, a system developed in the 1950s and first fielded in 1963, was a prime candidate for upgrading or replacement. In 1980, the replacement for the M109, incorporating elements of the other programs, was underway and after 3 years of work several alternatives for replacement or modernization of the M109 had been evaluated as part of the Howitzer Improvement Program known as HIP.

With the multitude of acronyms involved before work had even begun, it is easy to become confused, but the HIP program laid general principles a future system would have to meet to be acceptable. Firstly and most importantly, the caliber was defined. It had to be a 155 mm gun with a barrel length not less than 38 calibers long (5.89 m) and not longer than 50 calibers (7.75m) capable of firing standard 155 mm shells to 25 km. HERA – High Explosive Rocket-Assisted – ammunition would be available in order to extend this range to 30 km. Shells would be loaded by means of an automatic loader system reducing the crew down to a nominal 4 with some optimism that it could be reduced to 3 and operated in an emergency by just 2 men.

Not less than 50 rounds were to be carried with a target of up to 75 shells which, working with the automatic loading system, could deliver between 8 and 12 rounds per minute. If the automatic loading system was omitted and a manual system retained, then the rate of fire would drop to just 4 rounds per minute, as well as impacting the number of crew required to operate the gun. The alternative consideration was a ‘halfway house’ of a semi-automatic system rather than manual or fully automatic with an estimated rate of fire of between 4 and 8 rounds per minute. The desire was for a state of the art system to meet the RAM (Reliability, Availability, Maintainability) requirements with computer-controlled and monitored systems. Fire control was to be by means of an onboard ballistic computer and computer-controlled gun motors. This combination allowed the system to fire, relocate to avoid counter-battery fire, and then fire again in under 1 minute. The ability to avoid enemy counter-battery fire was a significant improvement and step forward.

Protection was to be just of an ‘improved’ type over what (presumably) there already was in comparison on the M109 and the vehicle had to have an NBC overpressure system fitted as standard. A further note was that for self-defense the vehicle would be provided with a single .50 caliber heavy machine gun on the commander’s cupola. For mobility, the HIP required a new powerful engine capable of delivering not less than 20 horsepower per ton capable of propelling the various vehicles based on this chassis to a road speed of 60-75 km/h, to a maximum operational range of between 400 and 600 km. All vehicles had to be capable of transportation via a C-130 transport aircraft.

Each SPG would have an associated and dedicated Ammunition Resupply Vehicles (ARV) with between 80 and 150 additional rounds of ammunition. This vehicle was to be based on the same chassis as the SPG itself, with a crew of 3 or 4 and the same level of protection.

Another vehicle would be the Battery Operations Center (BOC) also based on the chassis with a crew of 7 (in two shifts) and an Armored Maintenance Vehicle (AMV) with a crew of 2 (and 4 mechanics). Each AMV would carry spares, tools, and even a complete spare power pack for the chassis. The vehicles were to be assigned to a battery at the rate of one AMV per battery. 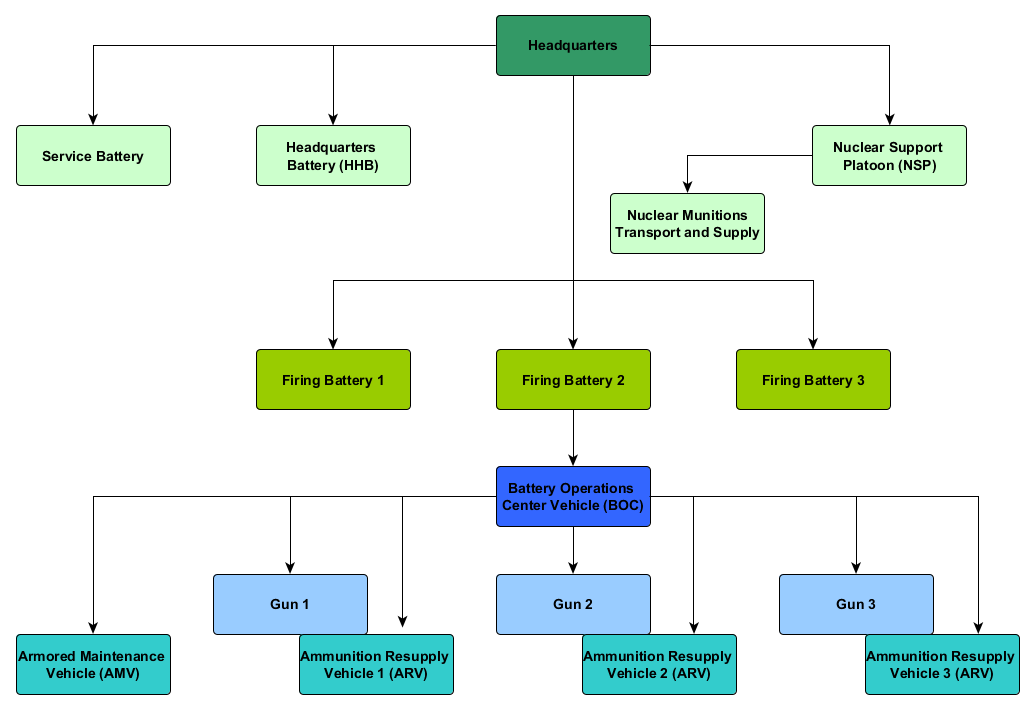 By 1984, FMC (Food Machinery Corporation) had made their own proposal to meet the demands of the HIP program as specified under the name ‘DSWS New Start.’ The basic arrangement of the proposal was an unusual-looking vehicle with a completely fixed superstructure on the rear of the chassis. The engine was mounted in the front and the ammunition (in drums) sat at the top rear of the casemate. The 155 mm gun mounted into this superstructure was not completely fixed and had the ability to move up to 5 degrees left or right. The driver sat forwards of the casemate, in a raised structure that extended back along the hull into the casemate. This would permit him to come back into the fighting space rather than be isolated in the driving position. The chassis itself was mounted on 7 road wheels with 4 return rollers and drive to the tracks delivered by a front-mounted sprocket. Power would be provided by an unspecified 700 hp engine.

The requirement was for a 155 mm gun 38 to 50 calibers long and FMC’s design was for a 45 caliber weapon which was under development at Watervliet Arsenal. The range required was 25km (30km with rocket assistance) but this FMC proposal gave the maximum range with standard (non-rocket-assisted) projectiles as 23km.

Shells would be delivered via a fully automatic system feeding from two large drums containing a maximum of 50 rounds divided equally, with one drum on each side of the breach. Fifty shells were the minimum required by the program but this FMC proposal could fulfill the other needs for full automation including fuze setting which was incorporated into the breach and was fully compatible with the existing 1 to 8 zone bag charge propellant system or the then newly proposed 5-zone modular propellant. Shells would be reloaded via the Ammunition Resupply Vehicle via two large hatches in the rear of the gun.

The end of the new start

The DSWS project was canceled by 1983. It was seen as being too expensive and too complicated. The focus would instead be on modernizing the existing M109 fleet and the HIP project would roll on sucking in more cash. For their part, FMC had produced a capable design whose biggest flaw was probably not the cost but the lack of a turret. They had met almost all of the requirements set by HIP and would try their hand at the M109 modernization instead, rolling much of their development work into a new M109.

Like many of these multi-year huge contracts in the US, this one is an enormous project of overlapping requirements. The HIP program didn’t end with the cancellation of the FMC DSWS New Start concept, it was still going on into 1991. This was the date by which the vehicles were meant to have been entering service yet development hadn’t even finished and only 8 prototype improved vehicles had even been made by 1989. The project was simply too large and phenomenally expensive. In 1989 alone, for example, the HIP program cost nearly US$28.5million and nearly US$10.5million the following year. It didn’t matter anyway for FMC. All work on a complete replacement for their project was terminated by 1984 with the decision being made at the time to simply modify the M109 fleet with new ammunition stowage and a longer range gun instead. The project was overall somewhat of a failure, no new vehicle was produced and a huge amount of money was spent. The opportunity for a new and more capable platform producing a new family of vehicles was lost.