Sandwiched between the Pacific on its south, Guatemala to the west and Honduras to the east, the nation of El Salvador is tiny. In 1969, this nation consisted of about 3.4 million people living on 21,000 square kilometers – slightly smaller than the US State of New Jersey. The history of this nation at the end of the 20th Century was a bloody one.

El Salvador’s military was a small affair too (~4,500 men in 1969 with an additional 25,000 nominal reserves), mainly armed with secondhand American military equipment supplied after WW2. In July 1969, El Salvador had a brief border war with Honduras, in which the Salvadoran army’s armored force was found to be seriously outdated. Primarily consisting of a handful of elderly M3 Stuart light tanks, the firepower was insufficient to support the soldiers and the armor too thin to protect against anti-tank weapons deployed by the Hondurans, such as American supplied recoilless rifles. The armor that did indeed prove successful for El Salvador was not these relics of a bygone age, but actually hastily improvised armored trucks.

El Salvador, under dictator General Maximiliano Martinez, had been sympathetic to dictators like Mussolini and Hitler. However, following the attack on Pearl Harbor in December 1941, they joined with the United States in declaring war against the Axis. By 1942, El Salvador was a member of the Allies and, starting in 1942, the US Military was supplying arms to Central America to assist with internal security, including El Salvador. In early 1944, the United States supplied 8 (US records indicate 6) surplus M3A1 Stuart Light Tanks to Gen. Martinez’s regime. These were all allocated to the Cavalry Regiment replacing the obsolete Italian CV.3/33 Light Tanks which had been operated since 1938. Just a few months after the Stuart tanks arrived, these new vehicles were used in a coup by the Army to force Martinez from power and into exile.

According to Captain Johnson’s (1986) research on the subject of arms supplied by the USA to El Salvador, there were no tanks supplied post-WW2 by the United States. Neighboring Guatemala was supplied with ten M3 Stuart light tanks in 1947, following the signing of the Rio Treaty (Inter-American Treaty of Reciprocal Assistance) and some speculation has been that, as Guatemala was friendly with El Salvador, some of those vehicles might have been supplied. This appears to be incorrect and Capt. Johnson’s research confirms this. This meant that the only tanks known to be in El Salvador by the end of WW2 and some time thereafter were those 6 or 8 Stuarts delivered in 1944, a situation which remained until 1969.

The Hundred Hours War or ‘Football’ War, as it is sometimes known, took place at a time of pre-existing tensions between El Salvador and Honduras, coinciding with rioting which took place during a 1970 World Cup Qualification match. The background to this conflict was an ongoing border dispute between Honduras and El Salvador made worse by agrarian reforms in Honduras in the late 1960s. These had resulted in the expulsion of some of 300,000 Salvadoran laborers and farmers (making up about 15% of the entire Honduran population) and the appropriation of property owned by them in Honduras which raised tensions between the nations. Thousands of Salvadorans are believed to have been killed, raped, or dispossessed from their land during this time. The increased repression of Salvadorans in Honduras at the time of the 1970 World Cup qualifiers was just more petrol on this fire.

The ‘football’ element to the war was a good media line coined by journalists for trying to explain these complex animosities between the two nations made all the more unclear by an undelineated border between the countries. Nonetheless, both states felt that they were the aggrieved parties in the war. On 14th July 1969, troops from El Salvador attacked neighboring Honduras.

The war ended after a ceasefire imposed by the Organization of American States with a negotiated peace on 18th July (took effect on 20th July) – hence the conflict sometimes being called the ‘100-hour war’. The name ‘Football War’ (and, unfortunately, some later publications catering to the American market referring to it as ‘The Soccer War’) has led to some people speculating that the war was related to an actual football game or riot, but it was not. The football element was merely symptomatic of problems caused by agrarian reforms in Honduras and some lazy journalism.

The Eastern Theatre force (TOO), under the command of General Segundo Martinez, attacked eastwards along the Pan-American Highway with the intention of then swinging north to the capital. The theatre of action encompassed the areas of La Unión and Morazán was composed of the bulk of the Salvadoran armor, the M3 Stuart light tanks, mechanized units, and artillery support.

The third force (TONO), was a 300 strong unit under the command of Lt. Col. Manuel Antonio Nunez working between these primary thrusts preventing Honduran force concentration.

The plan was, therefore, a simple one. Protecting their own border and a two-pronged pincer movement on the Honduran capital.

The objective was similarly simple, either seize the capital and/or force Honduran President Oswaldo Arellano to abdicate in what was supposed to be a 72-hour campaign.

Success was rapid initially, with the element of surprise on the side of the Salvadorans and the aerial attack having temporarily crippled the Honduran air force. Having attacked on the afternoon of 14th July 1969, by the end of the next day, Salvadoran forces had pushed over 8 kilometers inside Honduras. Within a day or so, the Honduran troops were withdrawing and trying to organize a defense at a hill called El Quebrachal in the Northern Theater. To take this defensive position, Salvadoran forces attacked with infantry supported by two M3A1 tanks. Both vehicles were put out of action by Honduran 57 mm Recoilless rifles and 3.5” bazookas. The Salvadoran infantry finished the assault though, pushing the Hondurans back.

A second battle took place in the Northern Theatre, at another hill which was being used as defence. Known as Chicotera, it was defended by Honduran troops guarding the east of the strategic town of Nueva Ocotepeque. Again, Salvadoran forces attacked supported by at least one M3A1 tank, although it ran out of fuel and had to be abandoned. Soon after, though, they had occupied Nueva Ocotepeque.

The attacks in the North were successful, but the performance of the tanks had been poor. In the Eastern Theater, the Salvadoran armor was made up of improvised armored trucks known as ‘Rayos’. In coordination with bulldozers being used as makeshift tanks, the Salvadoran 11th Battalion took control of the town of El Amatillo, an advance of about 5 km by the end of day one. A counterattack supported by aircraft launched by the Hondurans the next day was repulsed, but a second attack by the Salvadoran forces against Nacaome failed and the war in the East ground to a halt.

The Salvadoran attack soon stalled however, as the main armored force started to meet increased resistance. The Honduran air force started bombing locations in El Salvador and, on the ground, Tegucigalpa, the capital city of Honduras, was under threat by Salvadoran forces. The result was a movement by the Organization of American States (OAS) to sue for peace. The infuriated Salvadorans took some convincing, but with possible sanctions being imposed on them, they agreed, and eventually withdrew on 2nd August 1969, bringing the war to a nominal end, although tensions remained for several years. Even today, some tensions still remain over issues from this war which are unresolved.

El Salvador might have lost the first round qualifier in the football to Honduras but it won the rematch and a third decisive game too, qualifying to the Football World Cup for the first time in its history. Not only that, but it had proved that it was not going to be pushed around or tolerate the mistreatment of Salvadorans across the border in Honduras. The war though, like so many, was a pointless one, stoked by inflamed nationalistic rhetoric in the domestic media on both sides. Thousands of people were killed and even more people were dispossessed, and both economies suffered. El Salvador had learned a valuable lesson though – its armor force was obsolete. The force which had done well was a lightly armored improvised one, this was to shape Salvadoran thinking for a generation in terms of lightly armoured and mobile vehicles, although the tank role was eventually replaced with the French AML 60/90 armored cars. The M3 Stuarts which were left were eventually relegated to display purposes, having fought in one of the most obscure wars of the Twentieth Century.

It is not known how many of the original eight M3A1 Stuart light tanks El Salvador lost during the war with Honduras, but at least two are reported to have been knocked out. At least three still survive, one at the Museo Militar de la Fuerza Armada ‘Cuartel El Zapote’ and two as gate guardians at Ciudad Arce base of the Regimiento de Caballería (Cavalry Regiment). Both vehicles outside this military base are painted in a three tone green, grey and tan scheme, although all of the wheels and suspension components are painted white. The tank at the Museo Militar de la Fuerza Armada ‘Cuartel El Zapote’ is painted in a daring three tone, dark grey, brown, and bright green with the lower hull sides, wheels, and suspension components all painted black. Older images show that is has been repainted at least twice since it was at the museum and previously sported a darker green with tan and black splotches, although the lower hull and suspension parts were still black. One final note with the Stuarts in El Salvador is that, during the troubles of the 1980’s, there was some planning done about how to modernise them but quite what this entailed is unknown. The plan was reportedly nixed by US military advisers but what these plans had in store for these tanks will perhaps be known one day. 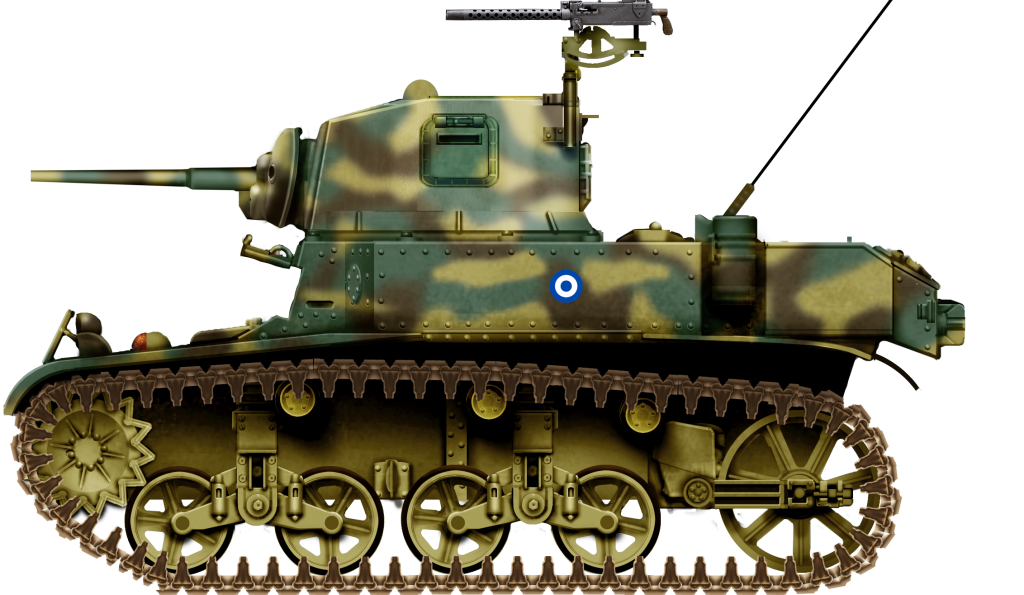