The PT-76 (named after its main gun) was the first new postwar Soviet light tank. There was a tradition of building light amphibious tanks dating back with the local adaptation of the Vickers amphibious 1929 vehicle and the prewar T-37A, T-38 and wartime T-40, all mass-produced. But these vehicles were quite slow in water and improvements were needed. At Leningrad ChTz factory complex (Chelyabinsk) VNII-100 institute the "Obyekt 740" designed by the engineer N. Shashmurin was presented in 1949. It was originally co-designed with Zh. Kotin from the Kirov Plant and the first tests proved successful. It had good overall performances and an innovative water-jet design system. This was followed by a final prototype built at Kirov Plant in 1950, and after a second campaign, the vehicle was adopted on August 6, 1951, as the PT-76. It was known in Russian as the Плавающий Танк, Plavayushchiy Tank (literally "floating tank").

The PT-76 design was straightforward, as a stretched out T-40. The driver was at the front, fighting compartment in the middle and engine at the back. The commander was stationed at the left and loader at the right-hand side of the main gun. The former fired the gun and acted as a radio, thus reducing his observation capabilities. The turret top was fitted with a large oval shaped double hatch. The driver sat in the front center, had one piece hatch, three vision blocks and periscopes located on the top of the glacis slope beneath the main gun.

Below him was located an emergency escape hatch. The main driver's periscope was equipped with the TVN-28 night vision which gave him a good view at 60m. The turret was of truncated cone type, with a hand-rotatable commander cupola on the left side of the main double hatch. The latter could be open frontally (acting as a shield) or backward. It had three TPKU-2B vision blocks and two TNP day periscopes. At his disposal, there was also a 4X optical sight coupled to the main gun, and a TShK-66 sight/rangefinder. The loader had an MK-4 observation device in the main hatch. 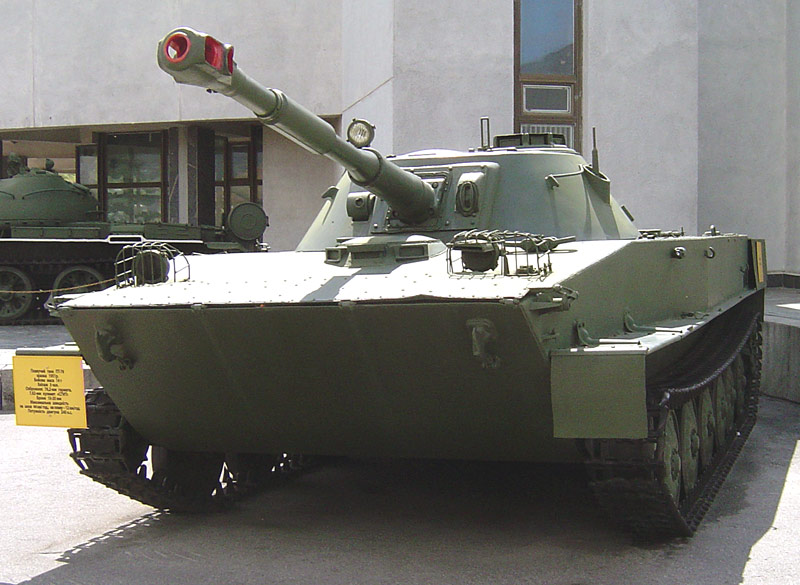 The hull was made of cold rolled welded steel, completely sealed. Turret armor was 20 mm at 35° on the front, 16 mm on the sides, 11 mm rear and 8 mm top. The hull armor was 10/13 mm at 80° on the frontal glacis sloped beak, 14 mm sides, 7 mm rear and 5 mm bottom, only effective against small arms fire. Equipment included an intercom, gyro compass, 10-RT-26E radio with extensible antenna, two headlights on the hull's front and a turret's searchlight on the right-hand. The lack of NBC was problematic compared to other Soviet vehicles but was palliated by the PT-76B.

The main 6-cylinder, 4-stroke water-cooled engine was a straight in-line diesel obtained by halving the standard V12 of the T-54/55 series. It developed 240 hp (179 kW) at 1,800 rpm, with a cooling system and an initial heater. Cross-country capabilities were average (the hull ad to be raised later in production), but it could climb a 52° gradient cross a 1.1 m high vertical obstacle and 2.8 m wide trenches. Its 5-speed manual shaft-type (5 fwd/1 reverse) transmission was derived from the T34/85. Steering was completed by side clutch enables sharp turns and a handbrake.

The engine was fed by a regular fuel tank but four additional ones (two flat and two drum types) could be mounted at the rear, above and on the rear plate. The wheeltrain comprised six evenly spaced rubberized large road wheels mated on single torsion arms, drive sprocket at the rear and idler at the front, with no return rollers.

In amphibious mode, the engine thrust could be directed in two water-jets at the rear, after switching on the two electric bilge pumps, and raised the trim vane which was usually stored inside in the bow but could serve as an additional armor. Combined with the high-angle prow shape, it was able to swim like a fast landing craft. Additional inlet-type water-jet inlets were located over the last roadwheels at the rear of the hull, allowing better directional control in the water, or even reverse course, in combinations with the main jets. A great improvement over previous models using shafts and rudders, designed by N. Konowalow, also adopted later by the BTR-50. However buoyancy needed a large, light surface and subsequently, the PT-76 was unusually large for a light tank, especially with such protection.

The main armament, revised during production, was the standard rifled D5T 76.2 mm tank gun. Of 42 calibers, it had a practical 1500 m range and a rate of fire of 6-8 rounds per minute. It had a depression of -4 and +30 degrees and could fire when swimming. 40 rounds were in store, comprising a mix of OF-350 Frag-HE, AP-T and BK-350M HEAT. The latter could have the better characteristics and can pierce through 280 mm of armor at 1000 m, with a 650 m optimal range. The early models had no gun stabilization system at all, while the two later versions had a 1-axis, then 2-axis on the PT-76B. The coaxial 7.62 mm SGMT had a 1000 m practical range, reduced to 500 in daylight on the move and less than 600 by night. It fired by short bursts, at 250 rounds per minute and was fed by 1000 rounds, including tracers. By 1967 it was replaced by the PKT.

The production started in 1953 at the Stalingrad Tractor Factory (STZ). The first model had a multi-slotted muzzle brake, no bore evaluator, and no fume extractor.

In 1957, the initial D-56T main gun was replaced by the D-56TM with a double-baffle muzzle brake, fume and bore extractor. The hull was raised by 13 mm to improve cross-country performances and had a completely new vision and communications set, with night visions for the driver. A 1-axis gun stabilization system was later adopted and a TDA thermo smoke generating system. Earlier series were therefore retrofitted. In 1959 the third and last modification was adopted as the PT-76B. It had a complete CRBN protection (the R stands for radiologic) called PAZ (protivo-atomnaya zashchita), improved TShK-2-66 sight, a filtration-ventilation system, improved electrical and observation equipment, and an STP-2P "Zarya" 2-axis stabilization system coupled with the improved D-56TS. It could now fire also an undercaliber AP at 2000 m range.

It also had a new diesel engine, the V-6B 6-cylinder in line water-cooled with gave 263 hp @1800 rpm and a new 400L tank with revised compartmentation and protection. This last version stayed in production until 1967 when approximatively 12 000 vehicles had left the factory. By the fall of the Berlin wall and of Soviet Union, ex-PT-76 still in service were taken out for an overhaul, in two stages :

This latest all-out modernization includes the new AU-220M turret, 57 mm autocannon with increased rpm, range (capable of defeating 100mm of armor at 1120 m range), fed with splinter-tracer and armor-piercing-tracer, and coupled with an AA rangefinder with a 6 km ceiling. The hull in re-engineered with a UTD-20 V6 4-stroke airless-injection water-cooled diesel, with had a 15.8 litre capacity and develop 300 hp (224 kW) at 2,600 rpm coupled with the BMP-1 transmission. It could be replaced by the UTD-23 or V-6BF as an option for the export market.

The PT-71 mounted a 9M14 "Malyutka" AT guided missile (NATO AT-3 Sagger) but remained at the prototype stage. The PT-76M was an improved amphibious vehicle developed for the marines but ultimately not adopted. There was also the PT-85 armed with an 85 mm D-58 tank gun (two prototypes built), and the PT-90, testing the 90 mm D-62 gun. IFV vehicles were also tested like the Ob'yekt 911 (a wheel-cum vehicle) and the Ob'yekt 914 with two extra PKT MGs in the hull. The latter was derived as the Object 765, the prototype for the BMP-1 series.

A command version fitted with an extra long range antenna and an extra electric generator mounted on the rear deck.

This small-series variant had a new cast turret and 85 mm D-58, and was apparently used during the invasion of Czechoslovakia.

An amphibious full NBC protected variant with a domed cupola and flag marker at the rear.

A PT-76M was developed in Belarus by the Minotor-Service in Minsk. It had a new UTD-20 engine developing 300 hp (224 kW), and new steering and brakes. The Chinese Type 60 later refined and modified as the Type 63, the East-German K1 command version, Indonesian PT-76(M) and TAPIR, the North Korean Type 82, Polish versions with local modifications, and the Israeli PT-71 upgrade. The latter was performed by Nimda Group Ltd. to captured vehicles and included a 90 mm Cockerill with a new fire control system, new MG, laser range finder, new night vision devices and 300 hp diesel engine.

More than 2000 PT-76 & PT-76B were exported and many more built and modified locally. The lifespan of this vehicle is exceptional as it is still in service in many parts of the world today, including Russia in its modernized version (still 30 as of 2012). The list of operators includes:

Tactically, the PT-76 served with the reconnaissance sub-units of tank and mechanized divisions of the Red Army and the Soviet marines. It was used for landings, crossing large rivers for diversion operations or swampy/impassable areas. Although it was considered almost obsolete by the 1970s and it wass gradually replaced by BMP-1s and BRDM-1s, its powerful main armament made it irreplaceable, especially when establishing a beachhead or spearheading an assault in an unexpected area. But in direct assault, its large, thin hollow hull was an easy target. Gradually phased out, sold, and the remainder modernized, only four brigades were still by the original manufacturer until the end of the Chechnya war.

This vehicle is still committed to action today, mostly in Africa. From 1959 to 1975, Freshly arrived vehicles participated in the Vietnam War. North Vietnamese forces obtained 150 (ordered in 1958 and delivered until 1960) and 100 more in 1971-72. They participated in the Battle of Ban Huei Sane, and after that on the Lang Vei Special Forces camp (6-7 February 1968). They were largely committed at the Battle of Ben Het (March 1969), and by May 9, 1972, three PT-76 were the first casualties of a special squad of Bell UH-1s testing the TOW missile for the first time in operations.

The PT-76 was also largely used in the Indo-Pakistani Wars of 1965 and 1971. Indian vehicles distinguished themselves against Pakistani M24 Chaffee light tanks at Battle of Garibpur, but were mauled down by Pakistani US-built mediums at the Battle of Chamb.

In the six-days war, many Syrian vehicles were committed, and many destroyed or captured. In the Yom Kippur War, Egyptian 130th Marines Brigade's PT-76s crossed the Great Bitter Lake. Iraqi vehicles saw action against Iran in the 1980s, later during the operation Desert Storm in 1990 and again in 2003. In Africa the longest protracted fight these vehicles had been in action was the 1966-1990 South African Border War also largely known as the Angolan wars, both by Angolese and Cuban forces.

In Europe, Soviet PT-76s participated in the invasion of Czechoslovakia in 1968, and later ex-Yugoslav vehicles saw action in the Ten-Day war by Krajina Serbs in Slovenia, Croatian War of Independence and the Bosnian war in 1991 to 1995. Soviet vehicles were also used in the 2nd Chechen war of 1999.

The PT-76 on Wikipedia 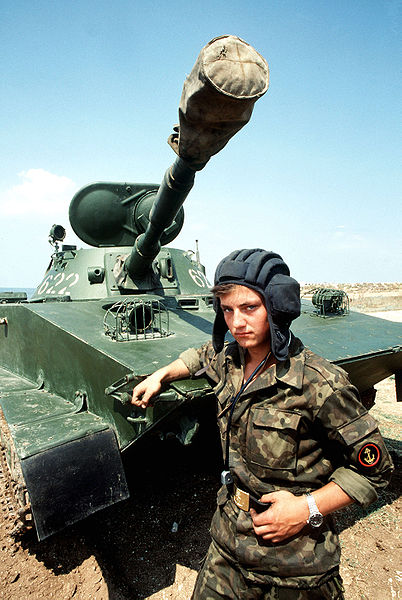 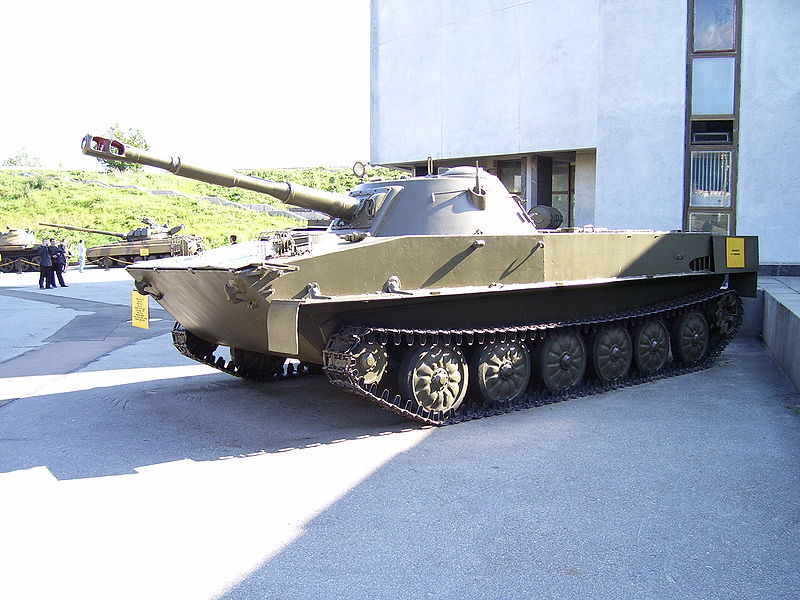 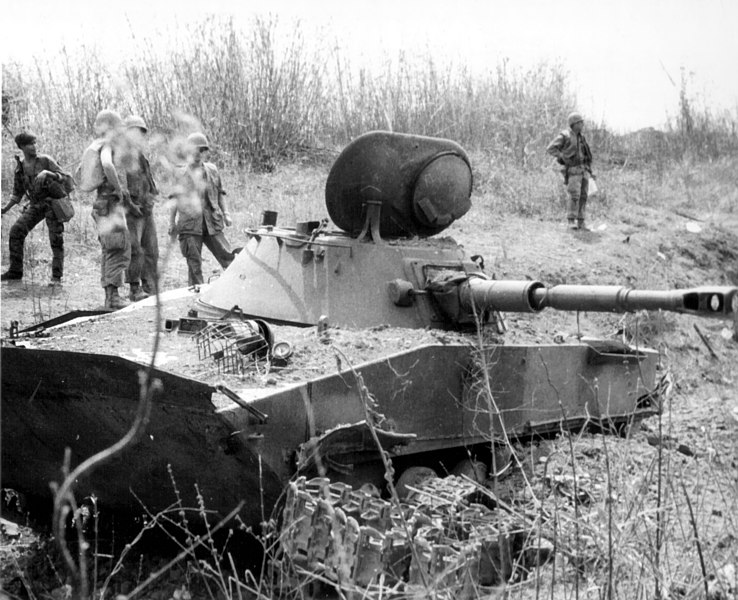 A Syrian or possibly Egyptian PT-76B on display at Yad-La-Shiron museum, with the elevated trim vane.