The M56 began life in the heads of an Anti-Tank Panel in Fort Monroe, 1948. They soon developed the idea of a self-propelled, high-velocity small caliber anti-tank vehicle that could be air transportable and deployable.
This idea was put forward to the Army Airborne Panel later the same year, who in turn forwarded the idea to the Ordnance Department. The department didn’t develop the project, under the designation of T101, until 1950. Cadillac was given a contract to build 2 prototypes.
The T101 project ran for 6 years, finally culminating with the 4-crew SPAT (Self-Propelled Anti-Tank) M56 Scorpion.

As the T101/M56 was in development, so was the SSM-A23 Dart Anti-Tank Guided Missile (ATGM). The Continental Army Command did not want to spend the time and money on two projects that effectively fulfilled the same role. This postponed the original 1957 delivery date of the vehicles to troops. A case was argued that the Dart would not be serviceable for another 2 years. Because of this, it was finally agreed that Scorpion would go into production. It finally started being delivered to troops in 1959.
Built by Cadillac Motor Car Division of General Motors for use by US airborne forces, The M56 was designed to be airdropped by heavy assault gliders and cargo aircraft. In later years, it was able to be dropped via helicopter. 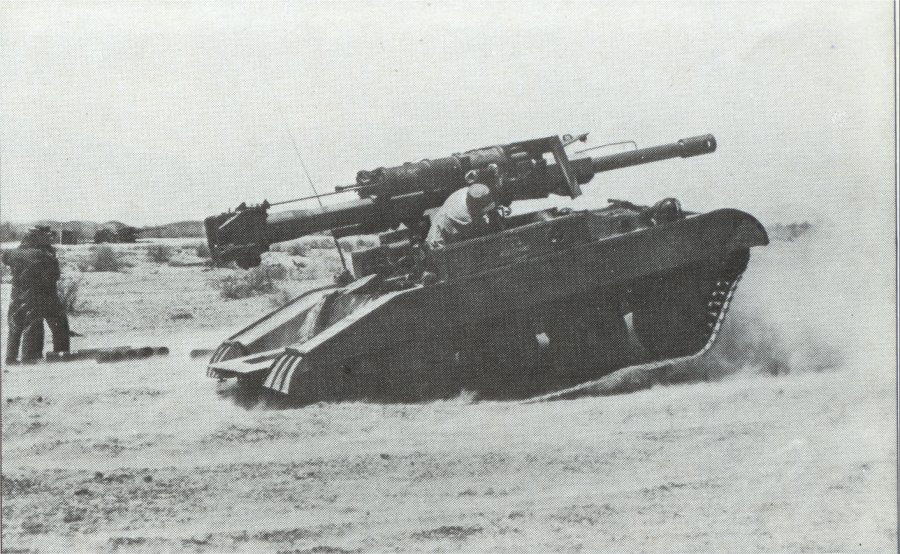 This photo of the M56 demonstrates the effect of the recoil. Source: – live.warthunder.com

Due to it being lightweight, it was an extremely maneuverable vehicle on every ground type. It was powered by a Continental AOI-402-5 high-octane gasoline engine. This sent 200 hp through the Allison CD-150-4 transmission to the forward mounted drive wheels, powering the vehicle cross country at a respectable 28 mph (45 km/h). The M56 featured a unique track and suspension. The track was lightweight and rubber connected with metal grousers. It had a torsion bar suspension, connected to all 6 wheels, including the drive wheel and idler to assist with recoil stresses. The road wheels were pneumatic with 7.5×12 tires that could be run even if punctured. Pneumatic road wheels were chosen because they are much lighter compared with the standard solid-steel.
The airborne deployment and weight restrictions associated with it demanded sacrifices, one of which was that the Scorpion was a completely open vehicle. It had nothing that could be considered armor whatsoever, bar a 5 mm gun shield, and reinforcing brush protection bars on the front of the tank. Indeed, the only protection the crew had was the 5 mm gun shield, this only covered the driver and gunner’s positions. Other than that they were completely open to the elements or any fragmenting explosives.
Though the crew probably would’ve enjoyed a bit of armor, the lack thereof wasn’t too much of a downside. The Scorpion, like it’s namesake, was an ambush predator. It was able to fire and scuttle back to cover extremely quickly or engage targets at ranges up to 1000 m. The sting in this Scorpion’s tail was the M54 90 mm gun, which was specially designed for the vehicle. It was originally going to be mounted with the T119 90mm cannon, but it wouldn’t fit onto the tank. Its standard ammo was the M3-18 Armor Piercing round. It could punch through 190 mm of armor at 1000 m. It could also fire the entire range of 90 mm ammunition of the day, including HVAP and APCR-T. Ammunition was stored in a rack at the rear of the vehicle. It carried 29 rounds, in 3 stacked rows, 2 rows of 10, one of 9.
The gun, though it operated and performed as designed, was also somewhat of a problem. The force of the recoil was amplified on the vehicle because it was so light, to the extent that it would lift the vehicle almost 3 feet off the ground. Firing with the gun straight forward was not a problem, bar the intense recoil. However, should the tank need to engage a target to the extreme left or right of the gun’s traverse, it ran the risk of severely injuring either the driver, commander or the gunner himself. Indeed, if the commander stayed in his seat with the gun aimed to the right, he would receive a recoiling breech block to the face. As such, it was recommended by a manual that all unnecessary crew abandon the vehicle when the gun is fired in this way.

Tank Encyclopedia’s own rendition of the M56 Scorpion SPAT by David Bocquelet. 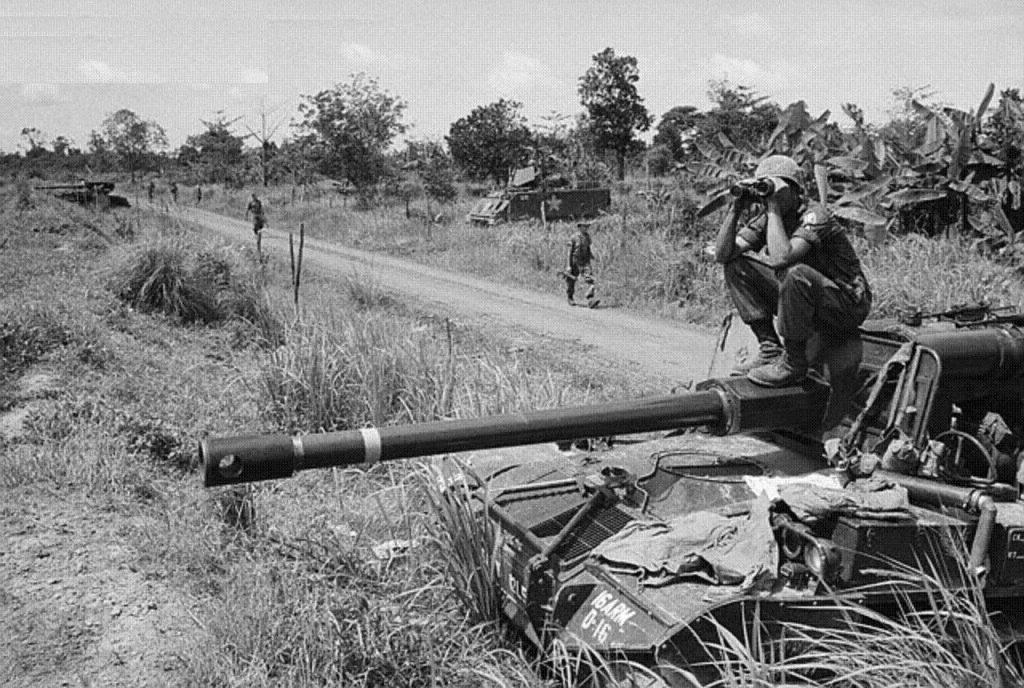 The M56 saw limited combat service. During the Vietnam War, it was deployed by the 173rd Airborne Brigade, the only brigade to do so. They used it mostly in a supportive role.
The M56 was not popular with the USMC who favored the Recoilless-Rifle equipped M50 Ontos, which was used in the same role but had an armored fighting compartment. The vehicle was effectively replaced in the field by the better armed and armored M551 Sheridan in 1970.
The M56 was exported to The Republic of Korea, Spain and Morocco. Morocco was the only other nation to use the vehicle in anger. It served in combat against Sahrawi rebels during the Western Sahara War.

I love this website, it’s my most visited of all. I would love to see some pre-war prototypes, such as the T1E1/E2, T2 medium, the T1 HMC, the T3 HMC, etc. Any of Christie’s designs would be nice.

Thanks, John! All vehicles that will be added in the future.

Absolutely love this article, adore the M56 Scorpion, despite its drawbacks I say it was a necessary step forward to the Sheridan. Would love to hear people’s personal accounts of this weapon system in Vietnam.

Really, a very like real scorpion, small, ting, and agile

I looked at a Scorpion in a park in Oregon a few years ago, and was amazed to find the the gun shield was made of plywood, not steel! So there was no armor at all! In 1983 I worked with a just-retired Major, who had served with a Scorpion-equipped unit in the 1960’s and had nothing but contempt for its lack of armor, ability to roll over on side-slopes and flip over when fired.

blast shield wasn’t plywood. It was 5mm ballistic steel. I have one I am restoring

you are right the blast shield was steel . I was the driver on one in KOREA in the late 60’s.

Correct. You can check it out yourself with the one parked up behind the 82d Airborne Division Museum at Fort Bragg NC.

Hey, how much are these worth? Either decent shape unrestored vs restored? Also, are drawings pretty hard to find for reproduction? Keep seeing 325 produced but this was has serial number 347.
Cheers
Mike

Considering it was the ONLY thing the airborne divisions had to kill tanks (other than the venerable 3.5″ rocket launcher), we line dogs didn’t mind having them around. It was always nervous having them come in to a company perimeter, returning from some road ambush position: we learned to sleep curled around a pine tree, rather than chance being missed by the ground guide and his flashlight 🙂 I had a buddy in 325 SPAT platoon who was a SPAT TC. He drew cartoons for the weekly post newspaper, the Paraglide; funnier than hell 🙂 I’ve searched for them a few times, no joy. Pity: a real piece of history there.

Was in 82 Abn, 1/325, 1961-63
Loved my SPAT. Ours had 50 cal spotting rifle mounted on top of gun which fired a tracer round to help pinpoint target up to 1,000 yds. When tracer round hit target you fired 90mm gun ASAP and then got ready to haul ass since gun noise & smoke gave away your position. You never forgot you were a sitting duck with nothing to hide behind. The gun barrel, when angled @ 60 degrees could hold up to 7 btls of booze, theoretically of course. We never were lonely when in the field, always troopers stopping by to say hello.

Hi Bob, this is a great anecdote. Would you mind it being added to the article in replacement for this comment?
– TE Moderator

1/325, eh? So was I, first 1st ABG 325 Inf, and then 1st Bn 325 Abn Inf when they broke up the battle groups. Remember the Post Paraglide cartoons? I’ll bet you knew their author. I remember one of my proudest moments: I was a buck sergeant in Battlegroup S3, and the Hq Co 1st Sgt needed a buck sergeant to look appropriate during a pass in review at some big VIP parade up at Pike Field. So I got to ride in a SPAT, standing up there on the right hand side, and saluting the reviewing stand when we passed by. It had rained a little, and I was shown one advantage of a SPAT: getting to stand on the front deck and let the engine fans blow the rain away! Great moment: those metal cleats thundering on the old PSP beneath the Pike Field grass. Beat hell out of standing in ranks, I must say 🙂

: I train with the M56 from 1962 to1964 327 Hq.Co. 101st.Aireborne Divison. Are problem was that we were concern that it would flip over when it fired , also we had O protection . One of our men was killed (Driver) when he was diving on asphalt the track broke and it flip over . They tell me this weapon could be knot out with a 45. I have always been thinking of the men who were sent to Vietnam that were trained on this weapon . Airborne SOB

This needs fixed. ” bar a the 5 mm gun shield”
Just trying to help.

This website uses cookies to improve your experience while you navigate through the website. Out of these cookies, the cookies that are categorized as necessary are stored on your browser as they are essential for the working of basic functionalities of the website. We also use third-party cookies that help us analyze and understand how you use this website. These cookies will be stored in your browser only with your consent. You also have the option to opt-out of these cookies. But opting out of some of these cookies may have an effect on your browsing experience.
Necessary Always Enabled
Necessary cookies are absolutely essential for the website to function properly. This category only includes cookies that ensures basic functionalities and security features of the website. These cookies do not store any personal information.
Non-necessary
Any cookies that may not be particularly necessary for the website to function and is used specifically to collect user personal data via analytics, ads, other embedded contents are termed as non-necessary cookies. It is mandatory to procure user consent prior to running these cookies on your website.
SAVE & ACCEPT
147 shares