Designed by the Pontiac Motor Division in the early 1950’s as the T46, this vehicle began life as the intended replacement for the Studebaker M29 Weasel. This amphibious cargo carrier was designed to carry cargo or up to eight troops over shallow rivers and swampy terrains and would become the M76 also known as the Otter.
Development started in the late 1940’s with the less than enthusiastic US Army watching on. The Army soon lost interest in the project, but the United States Marines, who have a habit of accepting vehicles which the US Army disapproves of (for example the M103 Heavy Tank), became interested. Production would start on the M76 Otter in the mid-to-late 1950’s. 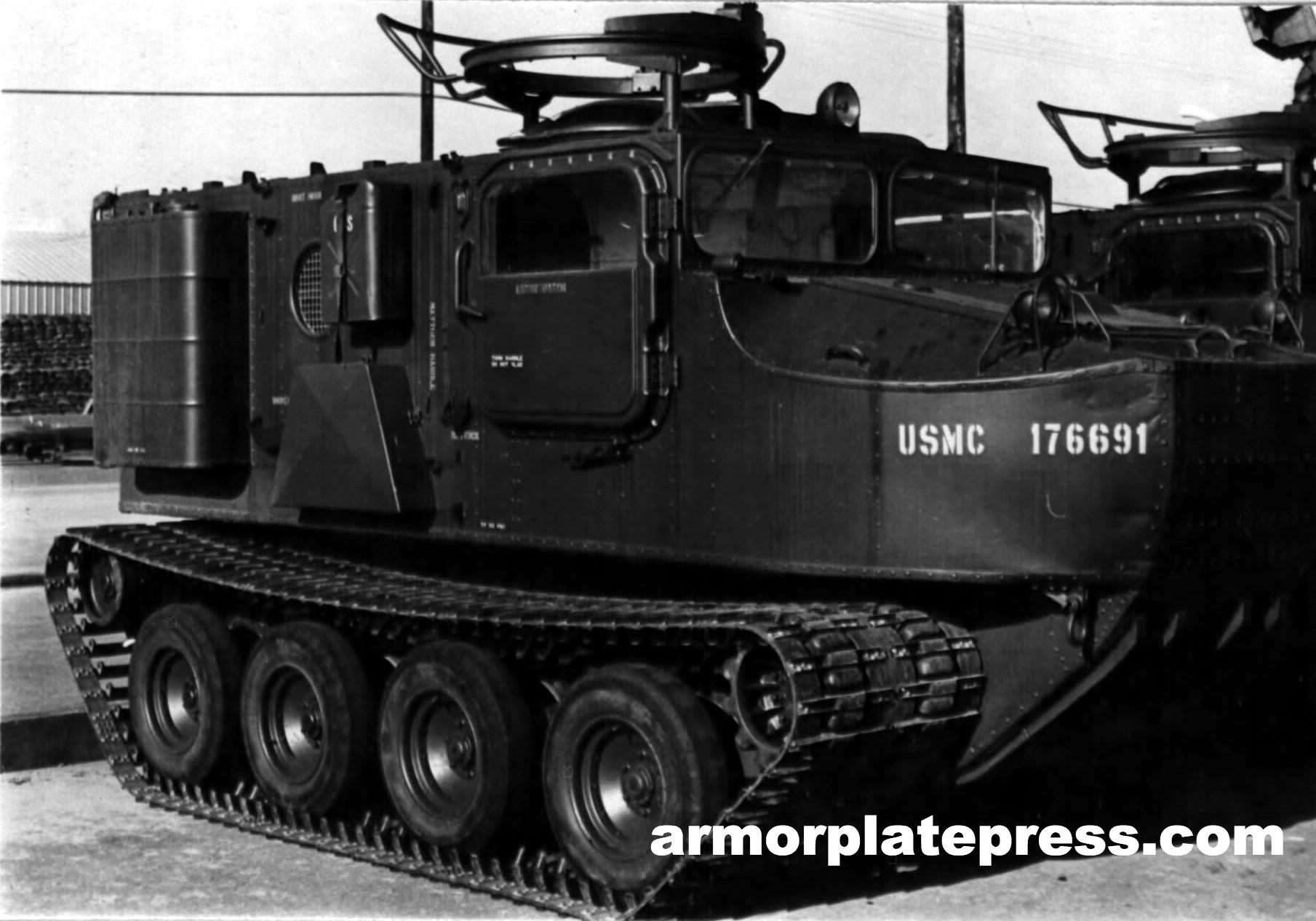 The Pontiac Motor Division – perhaps better known for their luxury sports cars – built the M76 at their plant in Pontiac, Michigan. It was tested at General Motors military proving grounds in Milford, also in Michigan.
The M76 was almost entirely an aluminum construction. This made the vehicle extremely light, perfect for its intended amphibious role, but also made it vulnerable to enemy fire. 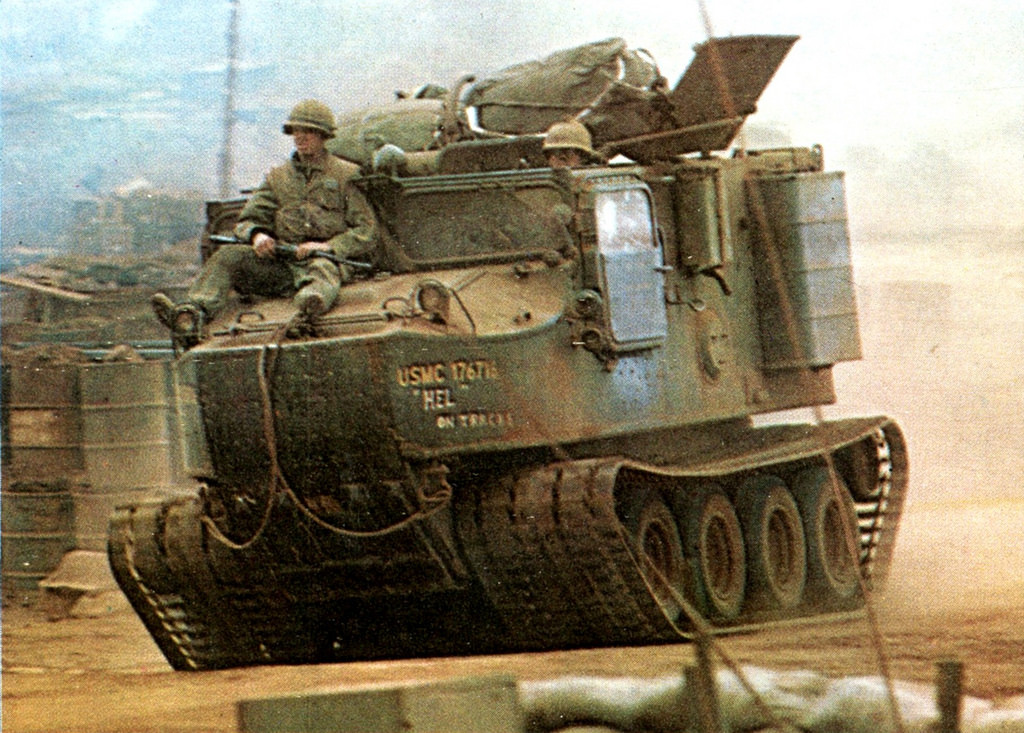 An M76 ‘hell on tracks’ on the move in Vietnam. Note the extensive roof stowage and open roof doors. Photo: SOURCE
Located under a truck-like nose at the front of the vehicle was the engine. This is known as a cab-over-engine layout. This engine was a Continental AIO-268 air cooled, 4-cylinder opposed engine rated at 130 hp. This was originally an aircraft engine. The exhaust, a small pipe bent to rear, was located on just behind the cabin roof. The power from the engine ran to a small, forward mounted drive sprockets; the idler was at the rear. Like the M56 Scorpion, the M76’s road wheels were pneumatic, simply meaning that the rubber around the wheel is inflated, like a standard truck tire. This lightened the vehicle, but also provided extra buoyancy when the Otter was traversing soft ground or water. The wheels were attached to a torsion bar suspension, with 2 wheels per suspension arm (the arm is sandwiched between the two wheels). The sprocket and idler wheels are connected to their closest set of road wheels on an arm.
This is like the compensating idler arm found on American tanks such as the M48, M60, and M103. As the road wheel arm it is attached to moves up and down, it presses either idler or sprocket wheel forward, keeping a constant track tension. The tracks were an evolution of the type found on the Weasel. They were a single long rubber band with added metal cleats and thicker rubber blocks for grip. The tracks were 76.5 cm (30.1 in.) wide. The top land speed of the vehicle was 30 mph (50 km/h). Steering was the traditional clutch type, meaning that one track is slowed allowing the faster track to pivot the vehicle in the desired direction.
Fuel for the M76 was stored in two large fuel tanks mounted externally on either side of the troop/cargo bay. The location of these tanks – and external stowage in general – varied during the Otter’s production. On the early vehicles, such as the T46 prototypes and Mk.1s the tanks were located centrally on the side of the hull. Later Marks, such as the Mk.2, can be identified by the rear mounted fuel tanks.
Behind the engine compartment was a two-man cabin with the driver on the left and a spare seat to his right. The driver operated the vehicle with bicycle like handlebars and is separated from the passenger side by a large round housing for the propeller drive shaft. Above the passenger seat was hatch in the cabin roof, on the outer side of this hatch was a mounting for a Browning M2HB .50 Cal (12.7mm) machine gun. This was the Otter’s only defensive armament. The troop/cargo bay was behind the cabin. It had the capacity to carry either eight fully loaded troops or 3,000 lbs. (1,360 kg) of supplies. The cabin and cargo/troop bay were fully enclosed and insulated. There were traditional truck style doors on the driver and passenger side of the cab. The troop/cargo bay had rear door for loading and unloading. There were also hatches in the roof. Both the driver and crew/cargo bay could be heated via an internal heating unit.

A collective image showing troops loading ‘C’ Rations into the Otter’s cargo bay, a serviceman inspecting the propeller and a surviving M76 with outer roadwheels removed revealing how they are mounted on the suspension arms. First two photos from Thomas Laemlein, armorplatepress.com
Being an amphibious vehicle, the front of the vehicle was built like the bow of a boat. There was a large propeller mounted at the rear of the vehicle under the access doors, below the towing hook. This propelled the Otter when in water, and was folded upwards when on land. Steering in water was conducted by the tracks. This is done by breaking one of the tracks. When turning port or starboard, the stopped track provides resistance as the rotating tracks turn the vehicle. Speed on water was 3.7 – 5.3 knots (7-10 km/h).
As well as carrying troops and supplies, the Otter, much like its Weasel predecessor, could rescue wheeled vehicles from boggy areas where they may get stuck. The Otter was better equipped for this job, however, as all of the vehicles had a 5,000 lb. (2268 kg) capacity winch located in the cargo/troop bay under a fold away seat. 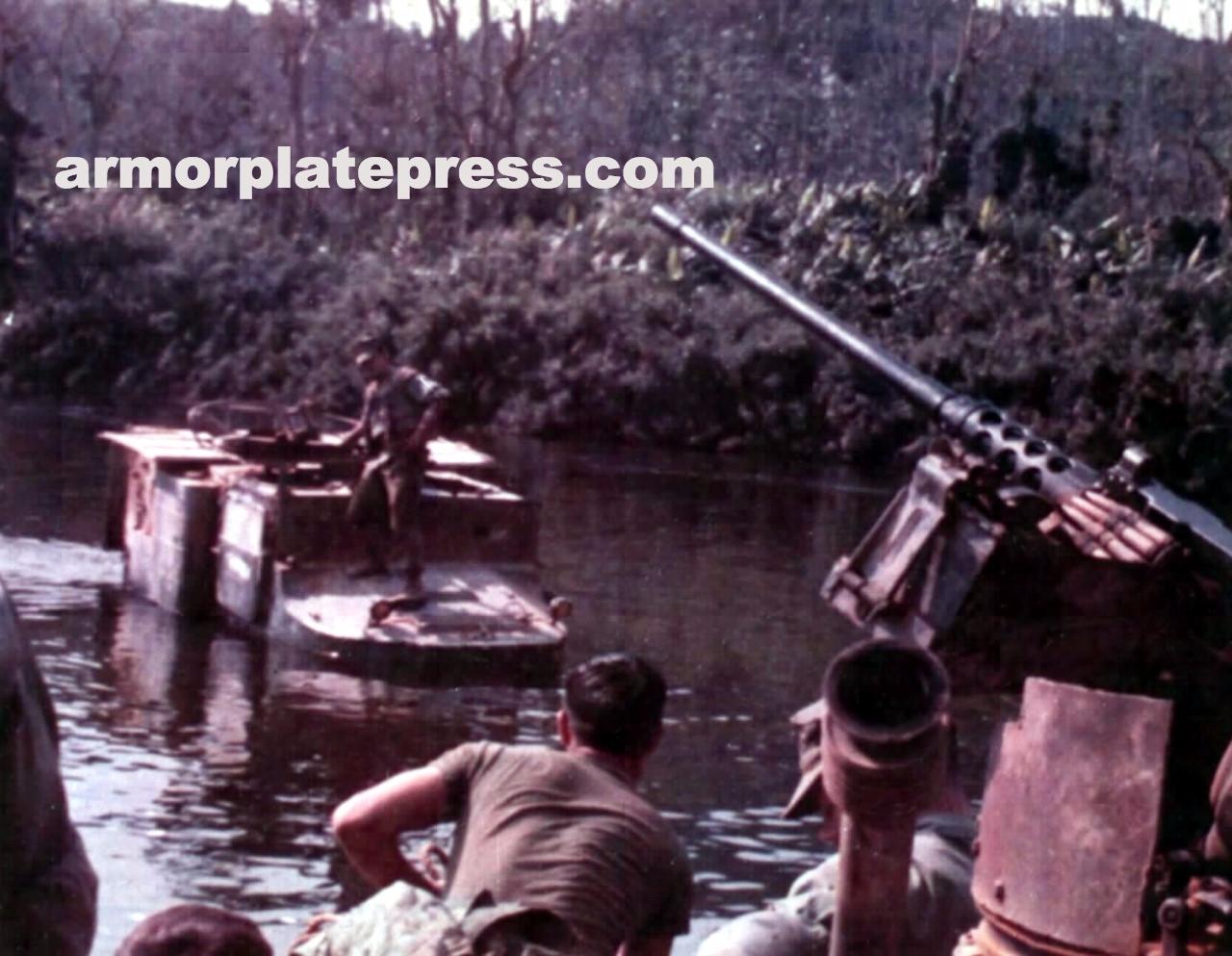 Two M76s traversing a river in Vietnam. The .50 Cal and exhaust is clearly visible on the fore-ground M76. Also, note the centrally mounted fuel tanks on the background Otter, identifying it as an early model. Photo: Thomas Laemlein, armorplatepress.com

The Otter was only ever in service with the United States Marine Corps (USMC) who deployed the vehicle in Vietnam with the first 33 vehicles arriving in Danang in 1965. These Otters were assigned to 3rd Motor Transport Bn, 1st Marine Division Fleet Logistics Support Command, 1st Marine Brigade. Usually, three to four M76s were assigned per Infantry Battalion.
The vehicle’s most prominent role was in the 1968 Battle of Dai Do in the Dong Ha sector. A Battle in which Captain Jay R. Vargas was awarded the Medal of Honour. This would later be the recorded in Keith Nolan’s ‘The Magnificent Bastards: the joint Army-Marine Defense of Dong Ha 1968.’
Below is an extract from the book. It is an account of the M76 in action:
“The Otter crews also earned their pay in the resupply effort. Forehand wrote that even though the M76 Otter ‘was always broke,’ the boxy, open-topped, tracked vehicle ‘did more than it was ever designed to do’. The Otter was able to negotiate water obstacles by floating. ‘The vehicle was totally devoid of armor,’ Forehand continued, ‘had a high profile on land, and was mounted with a .50-cal MG that invited RPGs. It was slow and ungainly in water, but could and did perform in places that would not support an LVT. These craft were invaluable and those who manned them were completely without fear.” 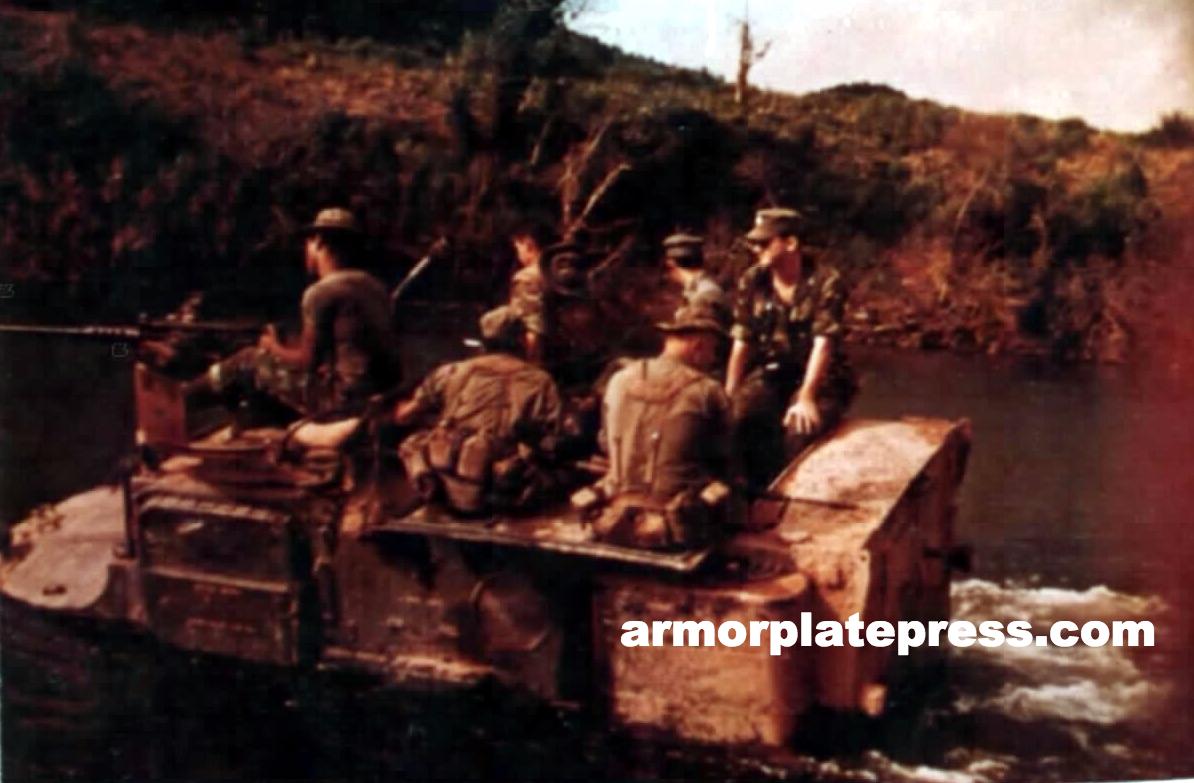 An almost fully loaded M76 on a river in Vietnam. The personnel on the rear are sat on the open roof doors. Photo: Thomas Laemlein, armorplatepress.com.
It served throughout the war in its intended role as troop and cargo carrier, but also found uses in light vehicle recovery and as a field ambulance. Some crews would bolt sheet-metal over the Otter’s large cabin windows in an effort to improved protection from small-arms fire. A small slot was cut for the driver to see through. Sheet metal panels were also added around the .50 Cal. mount, giving the appearance of a barrel. This got nicknamed the ‘gun tub’, a name the Marines borrowed from the Navy, as they so often do. This is because the armor around a gun on a ship is called a tub, ie. ‘port side 20mm gun tub’. 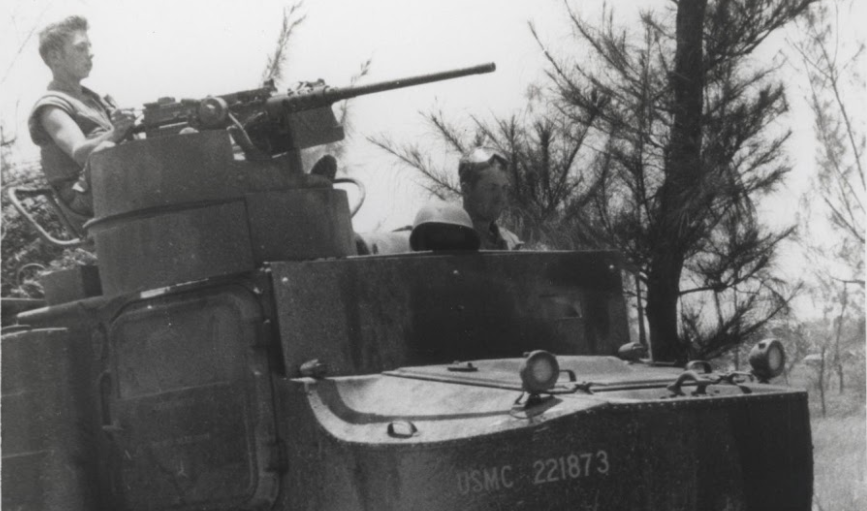 Here, the field-applied armor plate over the windshield and plates around the ‘gun tub’ are clearly seen. This is another early vehicle, as evidenced by the central fuel tank. This particular Otter is moving up to support Leathernecks of the 2d Battalion, 4th Marines [2/4] during the fighting around Dai Do Village east of Dong Ha in 1968. Allied forces accounted for over 1,000 confirmed NVA dead in the week-long battle that was part of Operation Napoleon/Saline. Photo: Official USMC photo by Lance Corporal Teacher. From the Jonathan F. Abel Collection (COLL/3611), Marine Corps Archives & Special Collections. www.snafu-Solomon.com.
The USMC would continue to use the M76 into the 1970s in service and supply units, and also for operations in arctic environments. It was replaced in service by the M116 Husky, the next vehicle in the line of Amphibious Cargo Carriers.

Like its Weasel predecessor, a number of Otters are privately owned and run or displayed at shows like the War and Peace show in Kent, United Kingdom. In 2017, a rare, running example of one of the T46E1 prototypes was displayed. Some privately owned otters have found a use. One vehicle, owned by HQ Transportation, North Pole Alaska, is used to combat wildfires.
They can also be found in Museums, such as the Pacific War Museum on Guam, Isle of Wight Military History Museum in the UK and the Marine Corps Mechanized Museum, Camp Pendleton USA. 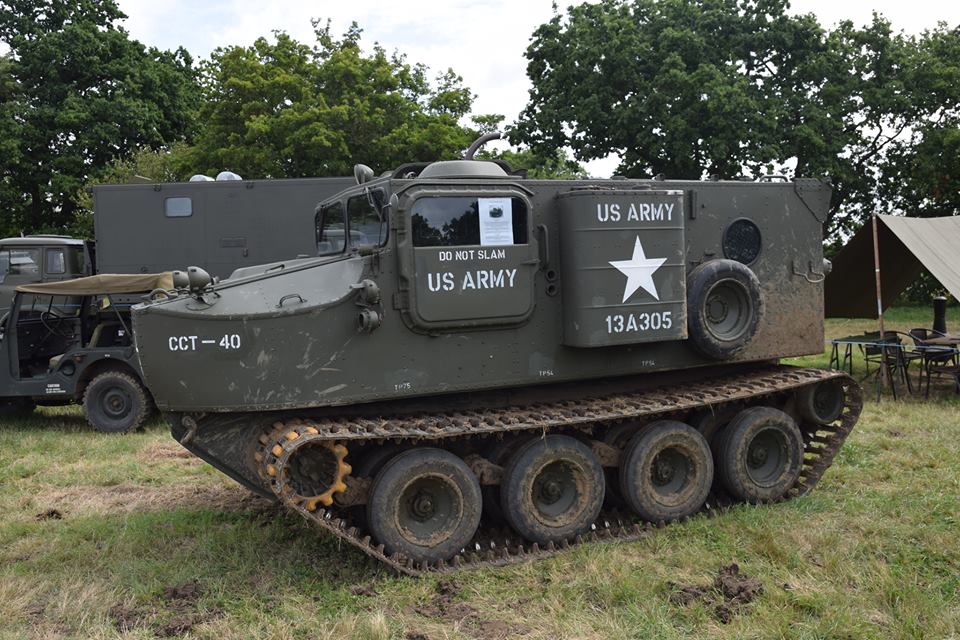 The surviving T46E1 at the 2017 War and Peace show in the UK. Photo: Craig Moore

An article by Mark Nash with research assistance from Michael Moore
For our U.K. readers, this article can also be found in the November 2017 issue of ‘Classic Military Vehicle‘ Magazine.

Michael Moore, Amateur US Military Historian, US Army, Retired.
Thomas Laemlein of www.armorplatepress.com, who has generously donated the use of images from his personal and commercial collection free of charge.
‘The Magnificent Bastards: the joint Army-Marine defense of Dong Ha 1968’, Keith Nolan
Standard Catalog of US Military Vehicles, 2nd Edition, David Doyle.
Militaryvehiclephotos.com
Steelsoldiers.com
Surviving Vehicles: massimocorner.com
on leatherneck.com

I saw an M76 being restored at the Isle of Wight museum a few years ago, I have some photos I took if you are interested in using them.

Hello, Mark.
I was aware of the one on the Isle of Wight but could find no pictures. I’d love to see them if you don’t mind sharing.
– TE Moderator

Have an email address I can send them to? Not sure if I can attach them on here?

Wooo, so cutee! Want one!

Theres one in Kensington NH on Rte 84 where 84 and 88 meet theres a legion with one sitting out front. I always wondered what it was

Do you have any pictures of the Otter?
– TE Moderator

The Kensington Otter is at the American Legion Post at 195 Amesbury Rd. (Hwy 150). There are photos on their website.

Does anyone know where to obtain a operating or maintenance manual for one of these?