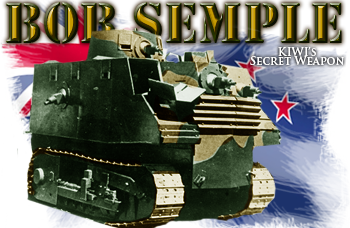 Kiwis in the Boer war and WWI

Prior to WW2, where New Zealanders fought with distinction in many theaters of operations, previous interventions included the Boer War (1899), under the direction of Major Alfred William Robin, where ten contingents were mobilized and sent, mostly mounted riflemen providing their own equipment. However, through the Defence Act of 1909, the old volunteer system was replaced by an age-based territorial defense which amounted to thirty thousand men. There was a gradual military training and after service, and all men could be still gathered as a militia.

During WWI, the New Zealand Expeditionary Force was deployed at Gallipoli, alongside the Australians as part of the ANZACS, were they forged, through all their pain and suffering, a part of the Kiwi national identity. Another famous unit, the New Zealand Mounted Rifles Brigade, distinguished itself in Palestine. In total, 100,000 fought out of a population of one million, and 16,697 New Zealanders were killed and 41,317 wounded, an astonishing 58% of all troops engaged, making New Zealand the country with the highest casualty-and death-rates per capita of any warring nation.

The early war (1939-41)
New Zealand declared war alongside Britain, and started mobilization in late 1939. Later, personnel was sent to the RAF and the Royal Navy, before local forces could be mustered, the RNZAF, which operated in Europe and elsewhere. Early on, in December 1939, its only cruiser, HMNZS Achilles, engaged the Graf Spee. The RNZN received a few British destroyers which it used in several campaigns. Despite its solidarity with Great Britain, new Zealand itself was ill-equipped locally to sustain a local assault by a major power, which turned out to be Japan after December 1941. Under sheer panic in face of the swift conquest of South-East Asia and the South pacific by the Imperial Japanese Forces, defence minister Robert Semple organized an embryo armored force with whatever means available. This led to the creation of the well-known “Bob Semple tank“, an improvisation which acted more as a morale booster than a real means of defeating attacking forces.

It was clear to anyone then in the ministry and the general staff that Great Britain could not divert any of its war production, direly needed elsewhere, to New Zealand. With the same idea of local improvisation, “Beaverette” armored cars were imagined in the United Kingdom in the most desperate times in the summer of 1940 by Lord Beaverbrooke, then minister of aircraft production. These improvised armored cars, called Standard Car 4×2, Car Armoured Light Standard, and better known as the Beaverette, were built upon a Standard Motor Company chassis and engine. Armor was simple and conversion quite fast, which helped secure high numbers (3,000) in no time. A local production version known as the Beaverette NZ appeared and was rapidly built. These were built by the New Zealand Railway workshops, in Hutt Valley, with a Ford 3/4 or 1-ton truck chassis, plus amor plates salvaged from Port Bowen and Mokoia moored hulls. 208 units were built, which were the only local armored means of defense for the whole island during the war. Units raised for combat and sent to fight either the Japanese, Germans or Italians, were gradually given more substantial armor. Around 100,000 were mobilized throughout the war as part of the Home Guard, but later reduced to 11,530 in early 1943, when the threat of an invasion seemed to decrease significantly.

The first unit mounted for service overseas was the 2nd Division, which distinguished itself in Greece, Crete, North Africa and Italy until 1945. Like early Australian units, armored means were reduced to the prolific and ubiquitous Universal Carriers. In North Africa, the LRDG (Long Range desert Groups), using Jeeps and Ford trucks, were famously driven by many New Zealanders, creating havoc well behind enemy lines.

The first unit operating with tanks was the 4th New Zealand Armoured Brigade (part of the 2nd NZ Division), formed from the 4th New Zealand Infantry Brigade in October 1942, taking a large part in the battle of El Alamein. It was equipped initially with Sherman and Stuart tanks supported by M5 half tracks and Lynx scout cars for reconnaissance. The unit’s most distinctive actions took place after it landed in Italy in October 1943. This brigade then counted the 18th, 19th, 20th Armoured brigades, and the 22nd New Zealand Motor Battalion (from October 1943 to November 1944). Its Italian battles and campaigns comprised the Sangro river crossing (October–December 1943), the Battle of Monte Casino (February–March 1944), the Central Italian campaign from May to December 1944 and the Adriatic Coast campaign from April to May 1945.

One crucial reinforcement in the summer of 1944 was the arrival of the Firefly tank destroyers. The latter was essentially a Sherman with the turret modified to carry a 17-pounder, then one of the best Allied antitank guns. By the end of the war, this unit was disbanded, but about 100 vehicles were kept for a possible future deployment to the Pacific theater, which eventually never took place.

The 2nd N.Z.E.F. was deployed in the Pacific under the Allied Pacific Ocean Areas command garrisoned in the Southern Pacific. Its main fighting force was the New Zealand 3rd Division, participating in the Solomons, Treasury Islands and Green Island campaigns. These were infantry forces, with mortar and artillery support. They were gradually replaced by US troops in 1944, but NZRAF and NRZN personal participated in the following campaigns until 1945. The projected Japanese invasion of New Zealand never took place, but German and Japanese surface raiders and submarines plagued the territorial waters until the end of the war. In case the final invasion of Japan would have taken place, troops from the Italian front would have been redeployed to take part in the Commonwealth Corps.

At the end of the war, NZ forces apparently received Valentine tanks, which were retained until the 1950s.

The 4th Armoured Brigade was reformed in April 1953, in a Cold War context, but not with the Korean war in sight. Indeed, these territorial forces would have been redeployed to face a Soviet invasion of the Middle East. This unit comprised the 1st (Waikato), 2nd and 3rd Armoured Regiments and the Divisional Regiment RNZAC (later renamed 4th Armoured Regiment in 1956, while the 2nd and 3rd ARs were disbanded). This unit was later reactivated in 1958 and then renamed Queen Alexandra’s Armoured Regiment, and The Queen Alexandra’s Regiment RNZAC in 1959. The Kayforce, a total of 1,044 volunteers assisted with an artillery unit, was sent to Korea.

Also in the same timeframe, units were dispatched to participated in the Malayan Emergency and the Confrontation with Indonesia. By the late 1950s, the old Valentine tanks were replaced by more modern M41 Walker Bulldogs and a few Centurion tanks. Both were replaced in 1960 by FV 101 Scorpion armored reconnaissance vehicles. In the late 1960s New Zealanders participated in the Vietnam War. However, the division present there was disbanded in 1961.

In the late 1960s and 1970s the Army received its main motorized APC, the M113, in large quantities. They were gradually replaced by the NZLAV, a local version of the American-Canadian LAV III (derived from the Swiss MOWAG Piranha) from 2003 on.

Until the 1980s, the army counted six Territorial Force infantry regiments. The Army command structure was reorganized after the 1983 Defence Review. The reorganization comprised a Land Force Command and a Support Command. A Ready Reaction Force was also created as a permanent professional corps, followed by an Integrated Expansion Force, which could be mobilized and expanded, and a Force Maintenance Group for logistical support. The largest exercise was held in the late 1980s, Golden Fleece. Contingents were sent in East Timor and Afghanistan. Under Peace-Keeping operations, NZ blue helmets were also deployed in Rhodesia (Operation Agila), but also in Sinai, Cambodia, Somalia, Bosnia, Sierra Leone, Mozambique, Angola, Bosnia, Bougainville, the Solomons and Sudan.
As of today, the Royal New Zealand Armoured Corps is equipped with NZLAV and Pinzgauer Light Operational Vehicles (LOV), a local high-mobility all-terrain 4WD (4×4) and 6WD (6×6) truck. New Zealander Firefly in Italy. Probably the fiercest tank in the Kiwi arsenal by 1944.