This article has been submitted by Leo Guo from Sino Records. Check out his website for more articles on Chinese history.

The formal surrender of the Empire of Japan on September 2nd 1945 had ended the eight year-long Second Sino-Japanese War in China. As per the instructions of the Allies, any Japanese units present on Chinese soil were to surrender to Nationalist Chinese units, as they were recognized as the legitimate representatives of China at the time. Within months, the Nationalists were able to obtain hundreds of tanks and aircraft from the Japanese, which then accompanied American Lend-Leased equipment in front-line units. The continuation of the Chinese Civil War had once again plunged the already wartorn country back into another bloody conflict which saw the Communist and Nationalist sides struggling for control over China. For a variety of reasons including, but not limited to, military corruption, ineffective leadership, and low morale, much of the elite forces of the Nationalists were wiped out by lesser trained and equipped Communist forces, and lost millions of dollars worth of modern American-supplied equipment received both during and after the Second World War. With the United States growing reluctant to keep supplying expensive equipment to the Nationalists, more and more Japanese equipment was brought out of storage to once again be used in combat. Among one of the most common tanks used in the Chinese Civil War was the Japanese Type 97 Chi-Ha and Shinhoto Chi-Ha tanks. These saw extensive use by both sides of the conflict. Curiously, the Nationalists appeared to have developed an indigenous casemate self-propelled-gun (SPG) in 1948 using the Chi-Ha chassis and a Japanese 75 mm (2.95 in) Type 94 Mountain Gun. This Chinese Civil War-era tank conversion is one of the most obscure products of its era.

Unfortunately, very little information is known to have survived the war regarding this conversion. No proper designation appears to have been identified for the tank, but it is commonly referred to by the specialized Chinese literature as the “Self Propelled Gun (自走炮 / zì zǒu pào)”. It is not known whether this generic nomenclature is a formal designation (assigned by either military or factory) or just used by sources to identify the tank. It is believed that the Chi-Ha SPG was designed and built by the Nationalist Chinese’s Military Ordnance Plant. The lack of information on this conversion has led to the rise of a lot of speculation regarding the tank’s capabilities and history. The tank is theorized by some to be a Japanese conversion created during the Second World War and not a Chinese conversion, but no evidence exists to prove its origin. However, Japan did develop a couple of Chi-Ha based SPGs, such as the Short Barrel 120 mm Gun Tank or the Long Barrel 120 mm SPG during the war. On the contrary, an article titled “自走炮 — 兵工署攝” (Self-Propelled Gun — Photos by the Ordnance Factory) was featured in a contemporary Chinese magazine “聯勤學術研究季刊: The Technical Research” published in October of 1948 and strongly suggests that the tank was a Chinese conversion. The Nationalists were known to have also created an M10-based SPG using demilitarized M10 chassis and Japanese weaponry. The article briefly goes over some of the tank’s dimensions and benefits, including the fact that it was also armed with two Chinese-manufactured “Czech machine guns”, presumably meaning 7.92×57 mm ZB-26 copies. In addition, the 15th edition of the Japanese magazine “J-Tank” suggests that the tank was a Chinese conversion, published under the article title of “梅の樹に桜の花 – 国民党軍による自走砲の短い自主開発” (The Sakura Blossom on the Ume Tree — Short Independent Development of the KMT Self-Propelled Gun – 1).

The Chi-Ha tank was developed in 1936 by Mitsubishi Heavy Industries as a replacement for the Type 89 I-Go tank. The tank’s purpose was to serve as an infantry support vehicle and was given the Type 97 57 mm (2.25 in) Tank Gun. It was adopted as the Type 97 Medium Tank and saw action up until the end of the Second World War. A second regunned variant was developed in the late 1930’s and had a prototype produced by late 1941. The regunned variant saw the replacement of the old Type 97 Tank Gun with a newer Type 1 47 mm (1.85 in) Tank Gun developed by the Osaka Arsenal. This variant was adopted as the Type 97 Chi-Ha Kai (also called the Shinhoto [New Turret] Chi-Ha) and was much more effective against armored vehicles. Approximately 1,200 models of the Chi-Ha and Shinhoto Chi-Ha were produced during the war and were widely distributed to Japanese tank units.

According to the article published by the Chinese magazine, the Chi-Ha SPG was developed as a result of studying European and American casemate SPG designs from the Second World War. Some of the benefits of the Chi-Ha casemate SPG design were that it could provide both direct and indirect fire support for front-line troops, having a high degree of mobility allowing for quick relocation, relative safety for the crew from small-arms fire, and having a relatively long effective range of approximately 8.5 km (5.3 mi) using High-Explosive-Anti-Tank (HEAT) shells and 7.5 km (4.7 mi) using High-Explosive (HE). This raises some questions though, as no HEAT shell was mass-produced for the Type 94 Mountain Gun by the Japanese. It is unsure why the magazine would give the figure for HEAT, but there could be a few explanations for this. It could be possible that the Chinese had locally manufactured HEAT shells compatible for the Type 94 Mountain Gun, but there is no evidence to suggest this. Second, it is possible that the Chinese just listed general information of the Type 94 Mountain Gun and did not realize that HEAT shells were not available. Nonetheless, it is doubtful that a HEAT round fired from a 75 mm gun could in any way have an effective range of 8.5 km and this was probably the maximum range at which the shell could be fired. Accurate aiming at ranges of over 1.5 km would be rather improbable for such a gun.

Based upon the few photos known of the Chi-Ha SPG, the conversion consisted of a new casemate mounted on top of the Chi-Ha hull with a machine gun mount in the rear. A second forward-firing machine gun was also installed, seemingly on the left side of the mantlet. The superstructure featured a hatch door on the left side, large enough for crewmen to enter and exit. A second smaller hatch was on the right rear side of the turret, presumably for the discarding of spent shell casings or loading of new shells. The shape of the superstructure bears an ostensible resemblance to some of the turrets on the World War II-era German BP42 armored train. However, other than the similar shape there are no other features – or evidence – which would suggest that the Chi-Ha SPG design was copied from the German train turrets.

The main armament of the Chi-Ha SPG was the Japanese 75 mm (2.95 in) Type 94 Mountain Gun which entered Japanese service in 1934 / 1935 and was supplied with up to 51 shells. The gun had limited traverse at the front, with the whole front of the superstructure turning along with the gun. The horizontal traverse angle of the gun was stated to be 20° to the left, but only 10° to the right. The elevation of the gun ranges from -10° to +45°, seemingly the standard elevation for the Type 94 Mountain Gun.

Chinese-manufactured Czech 7.92×57 mm ZB-26 machine guns were mounted in the front and rear of the casemate superstructure, which was accompanied by 1,000 rounds. The engine output for the Chi-Ha SPG given by the Chinese sources is stated to be 170 hp (127 kW), which matches the figures for the original standard Japanese Mitsubishi air-cooled SA12200VD V-12 diesel engine used in the Chi-Ha tanks. This would suggest that the engine was unchanged. There are no visible changes to the Chi-Ha’s hull or bell-crank suspension system, which would imply that there was no additional modification to the hull structure. The armor of the hull also probably remained the same, with 25 mm on the front and sides and 20 mm to the rear. The top and bottom of the hull were 8 mm thick. It is unknown what thickness the new superstructure had, but is likely thick enough to protect the crew from small-arms fire or shrapnel.

It is unknown how many of these conversions were made, but it most certainly did not exceed single digits. Curiously, one example of the Chi-Ha SPG was apparently captured by the People’s Liberation Army (PLA) following the Huaihai Campaign of 1949 near Xuzhou, Jinzhou Province. Some sources suggest that the tank was not captured at Xuzhou but rather at Fengtai outside of Beiping (nowadays Beijing). The 3rd Nationalist Tank Regiment happened to be stationed there and was equipped completely with Japanese tanks. Meanwhile, the 1st Nationalist Tank Regiment near Xuzhou was equipped with American-made M3A3 Stuart tanks. This would suggest that a Japanese-based chassis SPG was likely to be assigned to the 3rd Tank Regiment. A photo showcasing captured Japanese tanks from the Nationalists following the fighting reveals the peculiarly shaped tank turret of the Chi-Ha SPG. Unfortunately, the photo does not showcase details of the tank, as it was placed in the far back covered by other tanks. Either way, the fate of this captured Chi-Ha SPG is ultimately unknown. There is no definitive evidence to indicate that the tank was reissued to combat units or given any special attention by the Communist Chinese, so it is safe to say that the tank was likely scrapped at some point afterward. There are no other known instances of Chi-Ha SPGs being captured or utilized in the Chinese Civil War. 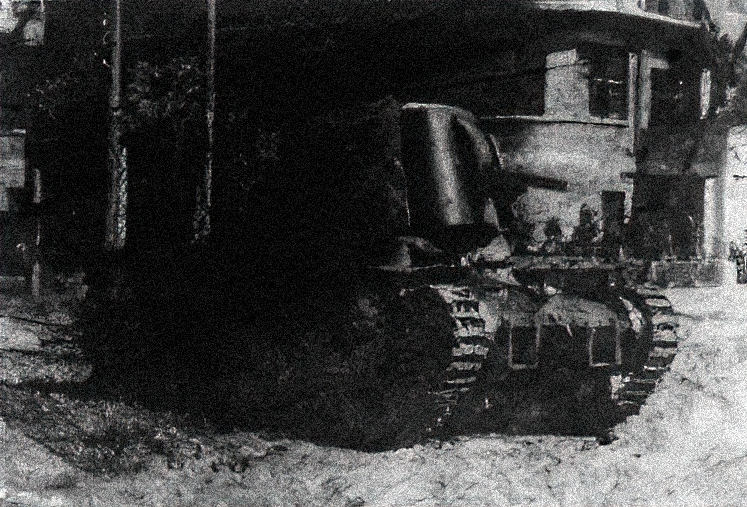 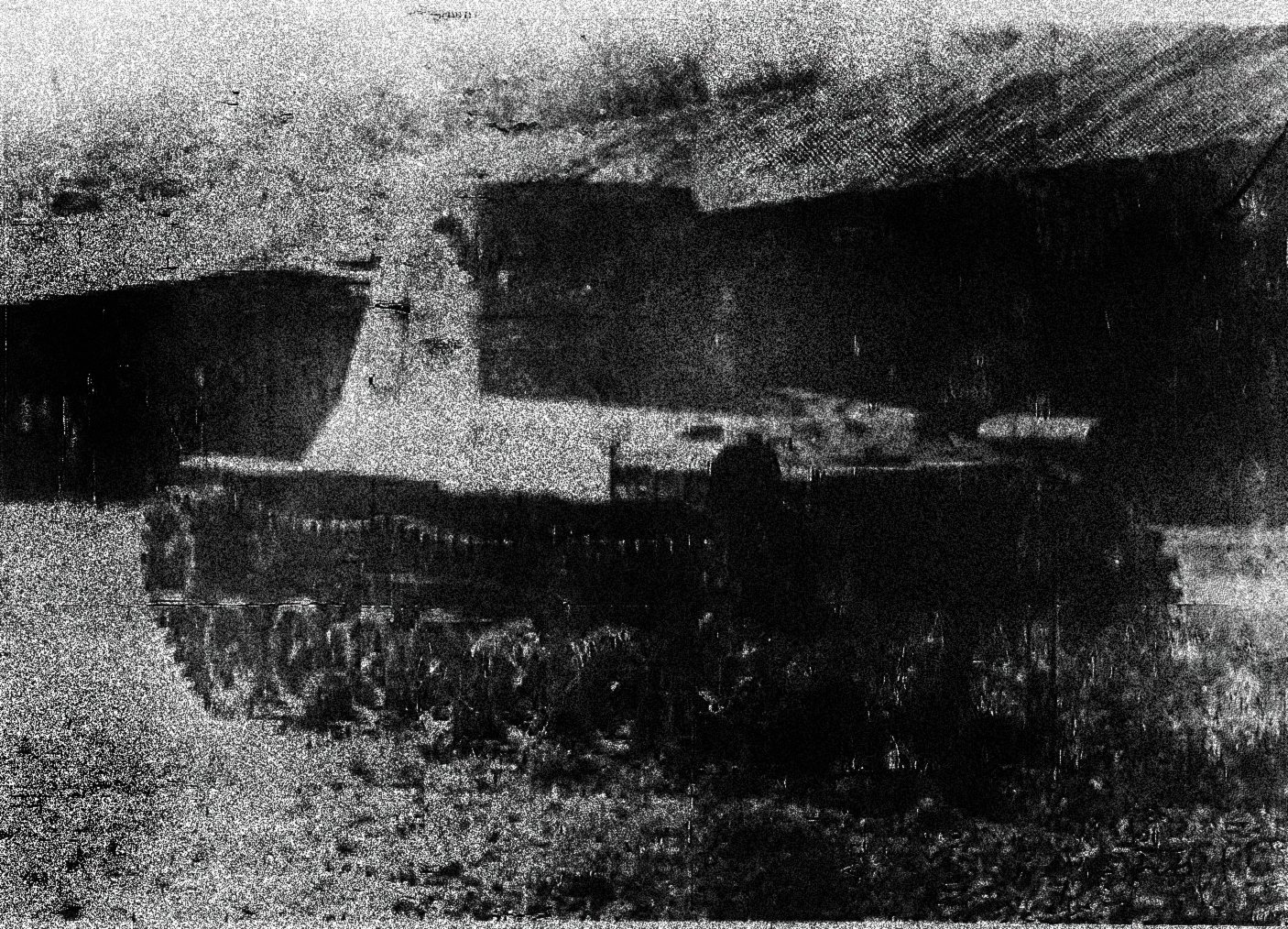 The Chi-Ha SPG was one of the rare oddities of the Chinese Civil War produced by the Nationalists in their effort to combat Communist forces. Due to the very obscure nature of this tank, it is impossible to fully analyze the design of the tank, let alone get a full account of the developmental history. Such a lack of information and general obscurity is reminiscent of much of the field conversion and indigenous projects undertaken by the Chinese in World War II.

孫建中 . 國軍裝甲兵發展史. 國防部史政編譯室, Sun Jianzhong. The history of the development of the armored forces of the Chinese army. The History and Political Translation Office of the Ministry of National Defense, 2005.

We’ve had this conversation before, but there was a 75mm HEAT shell used and fielded by the Japanese in WW2 for the Type 94 mountain gun.
Japanese file confirming use by Type 94 gun: https://imgur.com/mdhbHVA
Example captured by Americans: https://i.imgur.com/irwsDkW.jpg https://i.imgur.com/UezbOSj.png
Examples captured and used in tests by Australians against Matilda: https://www.awm.gov.au/advanced-search?query=matilda%20hollow%20charge&collection=true

The 8.5 km range is probably inaccurate though, or at the very least very optimistic.