During the late 1940s and early 1950s, France was developing a new tank to replace the now obsolete captured German Panther and the short lived ARL 44 heavy tank in French military service.

This project, designated M4, aimed at producing a vehicle weighing 50 tonnes which would allow France to compete with other tank producing nations on the battlefield and in export. The main goal was the revival of the French tank industry that had been one of the best in the world prior to WW2.
The M4 project was eventually handed over to the AMX company (Atelier de Construction d’Issy-les-Moulineaux) which created the AMX 50 tanks. However, as the tank development continued on its course through the 1950s, the tank weight grew from the initial specified 50 tons to more than 60 tons, due to the attempts to upgun and uparmor the vehicle. This was necessary to cope with new Soviet tank designs. This led the authorities to the search for an another firm able to provide an alternative 50-tonne design. 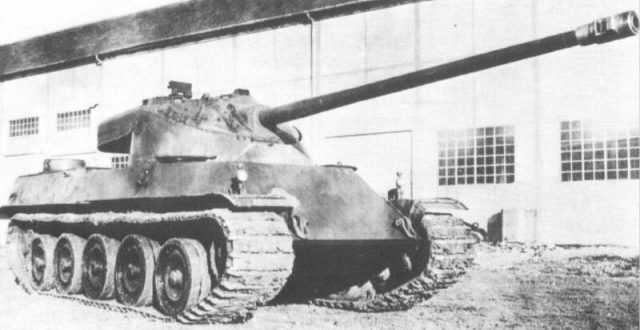 In the early 1900’s the French engineering and manufacturing companies Lorraine and De Dietrich merged to form Lorraine-Dietrich. They designed and produced some of the first automobiles. By the first decade, the company’s factory in Luneville, Lorraine was renowned in the automobile industry having produced great vehicles and hired engineers such as the famed Ettore Bugatti in their workshop. 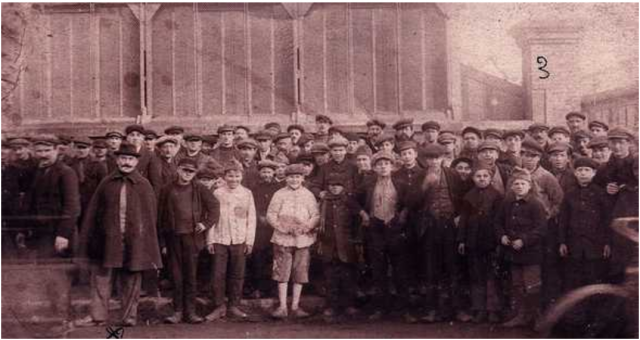 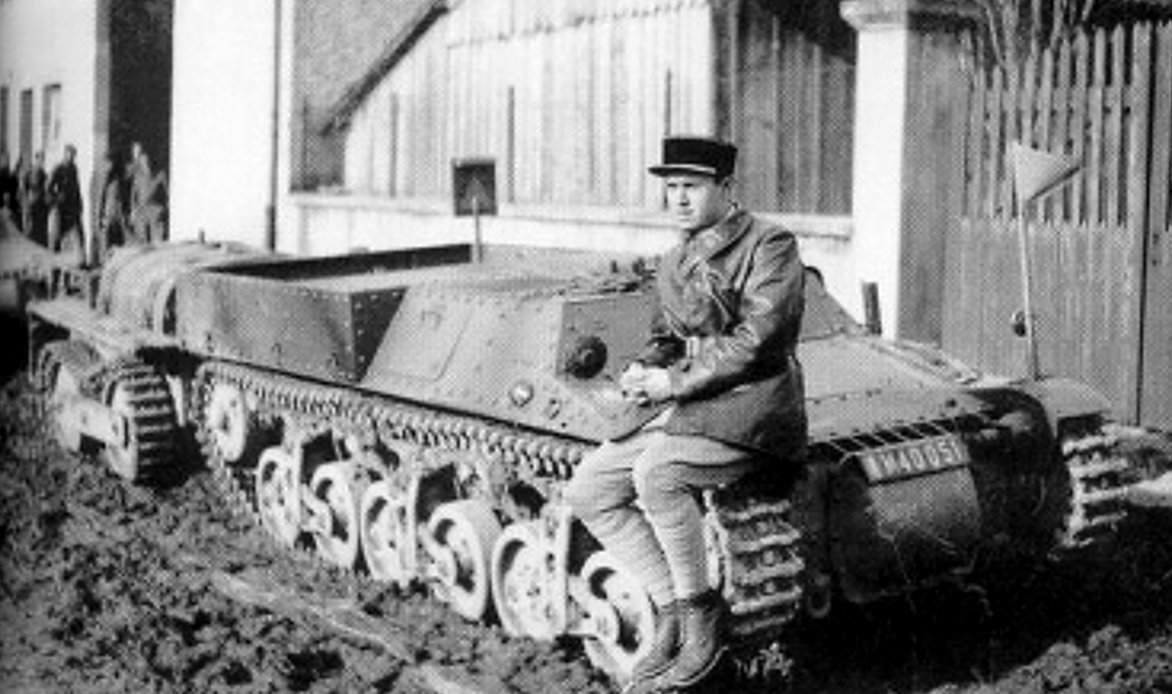 With yet another war over, Lorraine, like so many private companies in France, was financially crippled. It tried to rebuild its military and rail locomotive business. Lorraine was eventually bought by an American company, producing trucks before entering obscurity after the 1950s.

During the development of the M4 tank in the late 1940s, the Lorraine company was developing and testing a self-propelled gun (SPG) that had a visual similarity to the WW2 Jagdpanzer IV. It was called the Canon D’Assaut Lorraine. Weighing in at 25 tonnes, this SPG was equipped with a version of the 100 mm SA47 and could reach a top speed of 60 km/h (37 mph). It had a novel Veil Picard pneumatic air core tire/ road wheel as opposed to a steel road wheel, lowering the weight of the tank. The road wheels were mounted on torsion bar suspension with hydraulic shock absorbers. Many of its components would be used in future Lorraine tank development such as the Lorraine 40t and the various Lorraine experimental self-propelled artillery guns until 1953, when the project was abandoned.

The development of Lorraine 40t

The Lorraine company kept a close eye on the designs made by AMX, and were tasked with producing a lightweight variant of the AMX 50. Their design mated a hydraulically operated oscillating turret to the then experimental Canon D’Assaut Lorraine’s chassis, thus creating the Lorraine 40t. Similar to the turret designed by FAMH (Compagnie des forges et aciéries de la marine et d’Homécourt) for the AMX-50, the turret for the Lorraine 40t was designed in 2 sections. The lower section allowed the turret to rotate horizontally and the upper section could depress and elevate along with the gun with respect to the lower portion, with an elevation range of -8 degrees to +15 degrees. 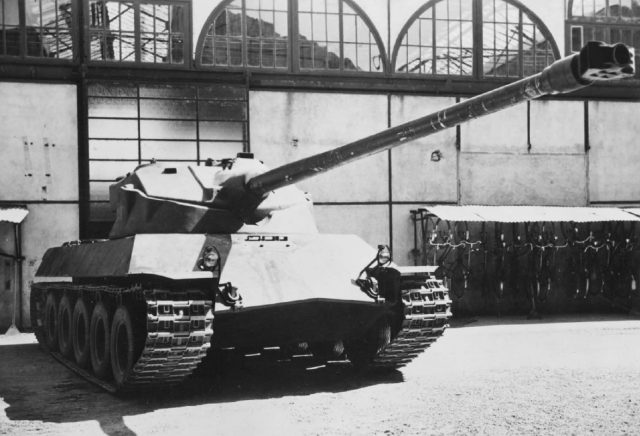 Front view of the Lorraine 40t, showing the pike nose and oscillating turret
Like on the AMX 50 project, the 100mm SA47 (The same version of the gun that the Canon D’Assaut Lorraine mounted) was chosen to be mounted in the turret, allowing the Lorraine 40t to achieve a similar amount of firepower as its heavier counterpart. Another notable feature the Lorraine 40t had in common with the AMX 50 was the introduction of a drum autoloader to the main armament with 50 rounds stored in ammo rack within the hull. The fact that the gun was mounted in an oscillating turret meant that engineers were able to easily install an autoloader mechanism without worrying about the possibility of the limited vertical movement of the gun within the turret. The commander and the gunner shared a linked firing system, allowing both crew members the ability to operate the gun.
Like many French tanks developed or prototyped during the post war period, the Lorraine 40t’s engine was of German design, inspired from the many German Tiger and Panther tanks that littered the French countryside, a few of which entered French military service after the WW2. In the case of the Lorraine 40t, a French built turbocharged water cooled Maybach HL 230 V12 called the HL 295 was used, producing 850hp at 3000 RPM. This engine was also used to power the AMX-50. Using an engine which was designed to propel much heavier tanks such as the Tiger and AMX-50, allowed the Lorraine 40t to reach speeds of up to 60 km/h (37 mph) during testing with relative ease. This was roughly 10 km/h faster than the AMX50.
In order to meet the requirements of weighing less than the then overweight AMX-50, the tank had drastically thinner armor. It was of welded construction, with thicknesses of 25 to 40mm. The tank was equipped with 10 Veil Picard tires (5 on each side) instead of steel road wheels to save weight. The inclusion of these tires also increases crew comfort by reducing vibrations and shocks when the vehicle was in motion. These attributes were carried over from the Canon D’Assaut Lorraine. 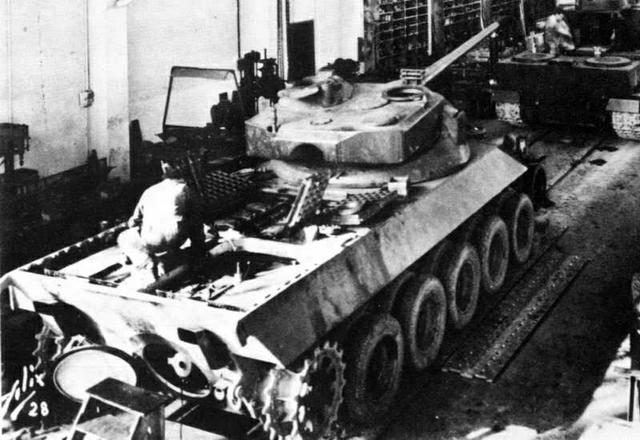 The Lorraine 40t undergoing some maintenance
Another notable feature of the Lorraine 40t was the pike nose design of the tank. It was similar to the second hull design of the AMX 50, which was inspired by several Soviet tank designs of its time like the IS-3, which had appeared publicly during the 1945 victory parade in Berlin. This was done in order to maximize the protection of the vehicle within the weight constraints. However, the effect of this design choice was probably limited, given that the vehicle had only 40 mm of frontal armor.
Two prototypes were finished in 1952 and testing of the vehicles went on through 1953 and 1954 but never reached the production stage.

The end of the line

Because America, as part of NATO, supplied surplus M47 Pattons to the French during the outbreak of the Korean war, interest in the AMX-50 and Lorraine 40t wavered. The high cost of producing and maintaining these vehicles eventually caused the cancellation of the tanks related to the M4 project in favor of the vehicles provided by NATO. Further development of a French main battle tank would not surface again until the Franco-German collaboration which sprouted the Leopard and AMX 30 in the late 1950s. The Lorraine 40t and its variants were supposedly the final attempts of Lorraine to reenter the military market.
An article by Velocity 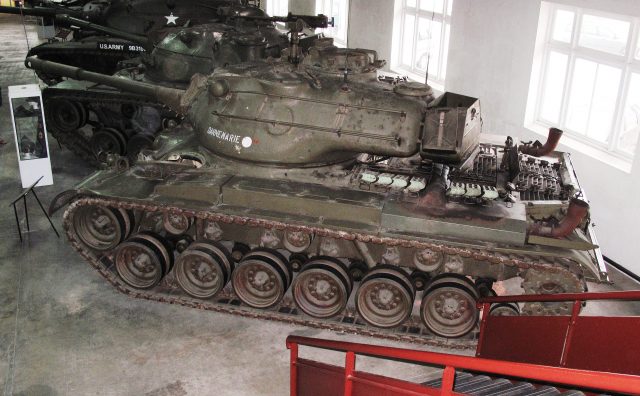 A French M47 Patton at the Saumur tank museum 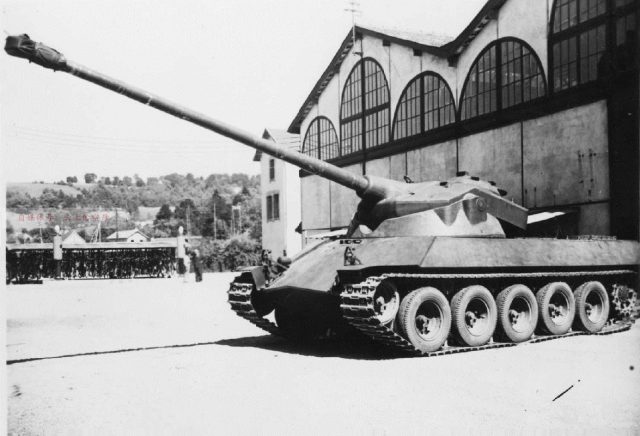 Looks like it has the M47’s suspension… Is this right?

It had no relation with the M47

Thanks for this article and the illustration. Just discovered this “canon d’assaut Lorraine” SPG, interesting prototype, have the tanks been scrapped after the end of the project?

Most of the military works of Lorraine went MIA after the project folded. Blame it on financial difficulties but a high chance the vehicle and its varients was scrapped.

Could you guys do an Article about Post war German Armor in French service? I would love to read about that since I have limited knowledge of that.

The French had so abandoned or disabled Panthers in France after the war they were able to create two brigades entirely composed of Panthers. However they were mostly there for evaluating performances. This was a mix of about 50 A and G types in the 503° RCC (Régiment de Chars de Combat) and into the 6°Cuirs (Régiment de Cuirassiers). It was short-lived because of MDAP US tanks were provided and the lack of spare parts. But their influence over French postwar designs are undeniable. Also according to accounts of St Nazaire’s 1st G.M.R. 15 tanks had been repaired and were used, such as the one Tiger I, one Tiger II, one Panther an 11 Panzer IV, one halftrack Panzerwerfer 42 plus other vehicles. Again, until parts failed. I’m confident someone in the team will make an article about this one day.

is the tank still around or has it been scrapped? or is there not any information about what happened to the tank?

Almost. That does have a french turret. (I also play Blitz)
– TE Moderator

me too blitz is fun but… the premiums are too costly and I don’t have much golds to get them premiums.

Wargaming has shown photos of a new tank called the Lorraine 50 ton
I believe it’s an up-armoured Lorraine 40t with the TCB turret with a 120mm cannon. Wargaming states the vehicle was a concept/existed in blueprints. Do you suppose it is real or another fake?

more than likely a fake, there’s a lot of fakes in WoT

Could you make an article on the AMX-50 Surblinde?

I need some help on some research about the 100 mm SA47 guns auto loader.
it would be amazing if any pictures of the auto loader out there.