In the sixties and seventies, the main French self-propelled gun was the Mk F3 155mm based on the chassis of the AMX-13 light tank. This self-propelled howitzer (SPH), which also saw success as an export, was in line with other SPHs of the era, meaning the crew had no protection whatsoever. Furthermore, the gunners and the ammunition had to be carried by a separate vehicle. In the case of a modern conflict, with the risk of Nuclear, Biological, and Chemical (NBC) being used, the crewmembers were left exposed. Just like the US in the 60s, when the M108 was developed (which lead to the more famous M109), which had closed rotating turret which protected the crew, France started work in the early 70s on a successor to its old SPH, based on the larger AMX-30 chassis. 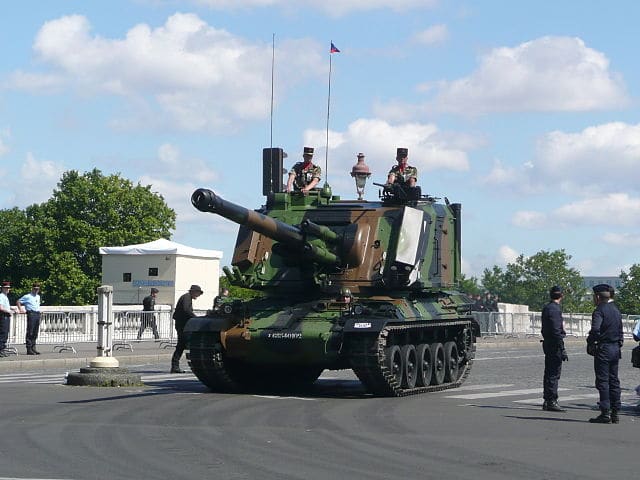 GTC 155mm Bastille Day 14 July 2008 CC licence- author Koosha Paridel/Kopa
After a period of tests and trials running from 1972 to 1976, the final AUF1 version was approved in 1977, with 400 being ordered. This was followed by the improved AUF2 version in the 90s, based on the AMX-30B2 chassis, 70 of which were bought by the French Army. 253 AUF1 and AUF2 were bought by France in total. The production ended in 1995, and the 155 GCT (standing for “Grande Cadence de Tir”, which can be translated to High Rate of Fire), like its predecessor, was largely exported to Iraq (85), Kuwait (18) and Saudi Arabia (51), with 427 built in total. The 155 GCT saw service during the Iran-Iraq war, the invasion of Kuwait, both Gulf wars and in Yugoslavia. 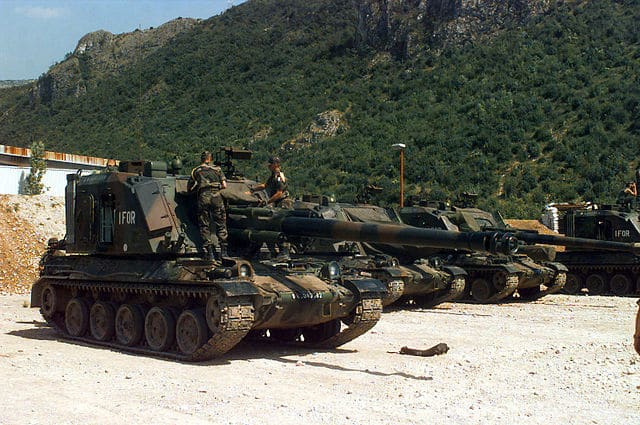 The basis of the design was the chassis of the AMX-30, the Main Battle Tank of the French Army until the introduction of the Leclerc. Other vehicles were based on this chassis as well, like the engineering AMX-30D, the AMX-30H bridge layer, the Pluton missile Transport Erector Launcher (TEL), the AMX-30 Roland surface to air missile carrier, the AMX-30SA Shahine for Saudi Arabia and the anti-aircraft AMX-30 DCA also meant for the same country. 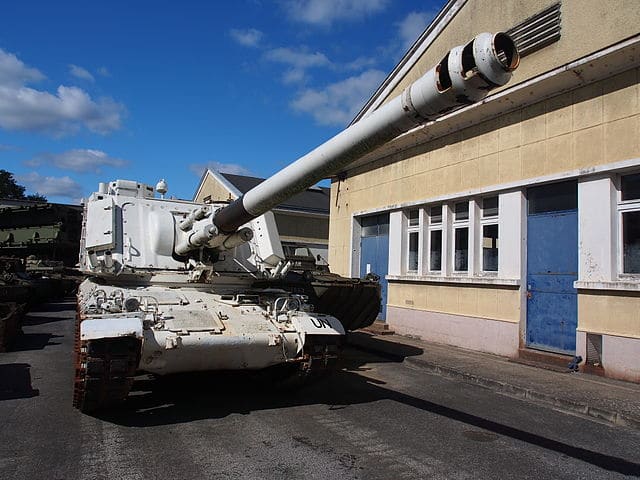 Front view AuF1 UN at Saumur Museum – Author Alf Van Beem
The engine compartment at the rear houses a Hispano-Suiza HS-110 12 cylinder engine (some sources incorrectly identify it as the 8-cylinder SOFAM 8Gxb). The B2 chassis, used on the AUF2, has a Renault/Mack E9 750 hp engine coupled to a semi-automatic gearbox. The latter propels the 41.95 ton vehicle to a maximum speed of 60 km/h (37 mph), a respectable value, superior to that of the American M109. An automatic fire suppression system is also located in the engine compartment. The suspension consists of five roadwheel-pairs connected to torsion bars and to shock absorbers for the front and rear units. The track is also supported by five return rollers. The drive sprocket is at the rear of the vehicle.The range of the vehicle was 500 km (diesel) or 420 km (gas) (310/260 mi). The 155 GCT is not air-transportable but it can ford 1 meter of water without preparation. 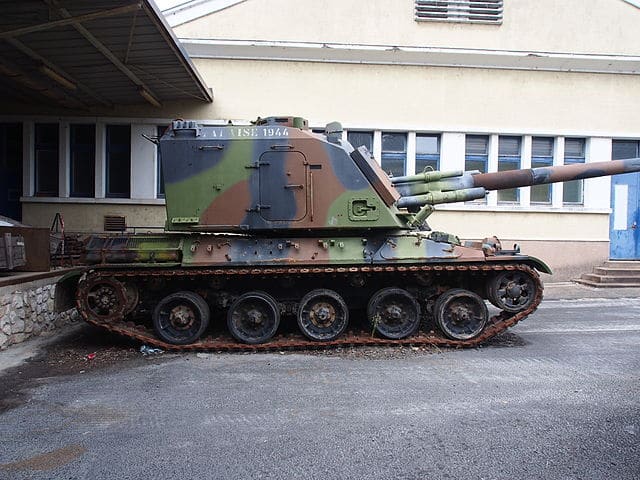 AuF1 155mm GTC “Falaise 1944” side view Saumur Tank Museum – Author Alf van Beem
The armor of the original tank was retained, the hull frontal glacis being 80 mm thick, the upper part being angled at 68° and the lower one at 45°. The sides were 35 mm thick at 35°, the rear was 30 mm thick and the top 15 mm. The driver was seated in the front of the hull, on the left, with a hatch sliding to the left and three episcopes, the central one being replaceable with an infrared night-driving system. The new turret was made of 20 mm homogenous laminated steel all around. For active protection, two pairs of smoke-grenade launchers are fitted on the lower part of the turret front. For the AUF2, these can be replaced with the GALIX multifunctional system (like on the Leclerc).
The rest of the crewmembers are seated in the large turret that was specially designed around the gun. The chassis alone weighs 24 tons, with the turret weighing 17 more. The latter needs its own auxiliary power sources mounted in the chassis, taking the shape of a 4 kW Citroën AZ generator which can power all the electrical systems when the vehicle is stopped. 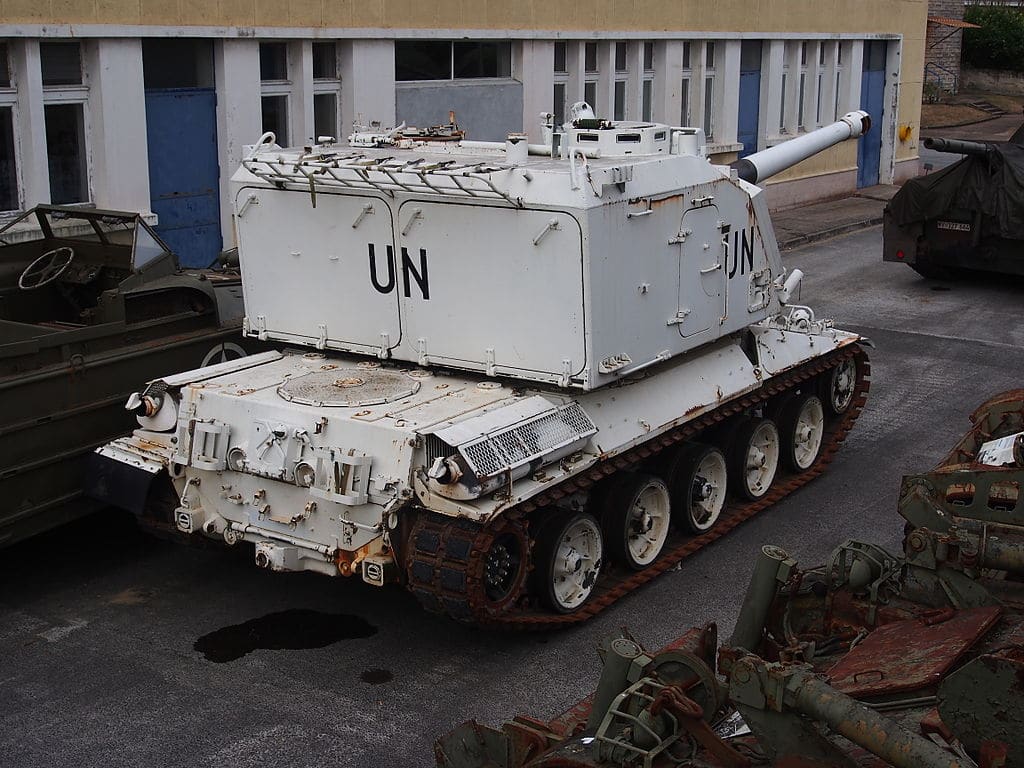 AuF1 155mm GTC United Nations colors, rear view at Saumur Museum – author Alf van Beem
The 39-caliber long 155 mm howitzer was specially designed for this vehicle in 1972. The tests started in 1973-74 and showed that it can reach a rate of fire of 8 rounds per minute and, in special cases, it can fire three rounds in fifteen seconds thanks to a semi-automatic loading system. The howitzer was improved, including a combustible shell casing and an improved automatic system allowing it to fire 6 rounds in 45 seconds. Because the combustible shell casings do not need to be thrown outside, this improves the NBC protection.
The AUF 1 39-caliber long gun has a maximum practical range of 23.5 km that can be extended to 28 km using a rocket-assisted projectile. The turret can rotate a full 360° and has between 5° and 66° of elevation. The muzzle velocity is 810 m/s. 42 projectiles are carried on board, held in the rear part of the turret, along with the explosive charges. This compartment, which is usually closed off from the outside, can be opened and fully resupplied in less than 20 minutes. The High Explosive shells are NATO standard (BONUS). For close defense, a 7.62 mm machine-gun or, more commonly, a cal .50 Browning M2HB is placed on the roof of the turret, fired by the gunner. This crewmember has a hatch on the right side of the turret with a rail-mount for an AA-52 anti-aircraft machine-gun. The vehicle commander, on the left-hand side, has a peripheral observation cupola and an infrared vision system.

In 1978, the testing campaign of the first six prototypes finished. These were followed by six vehicles in 1979 deployed with the 40th Artillery Regiment in Suippes. However, budgetary cuts delayed the project until 1980 when it was relaunched due to a successful export deal, as a series of 85 vehicles were sold to Iraq. Large-scale production was started and lasted until 1995 at GIAT in Roanne. The French artillery regiments received 76 vehicles in 1985 and, by 1989, 12 of the 13 active regiments were equipped with vehicles based on the AMX-30B chassis. 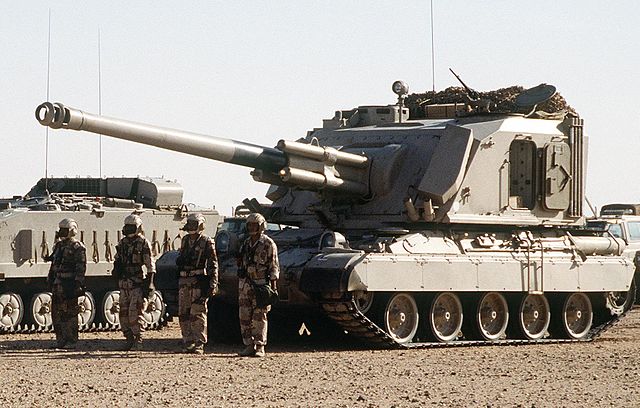 Iraq received 85 vehicles between 1983 and 1985, quickly deployed against the Iranians. They were in service when Saddam Hussein decided to invade Kuwait and during Operation Desert Storm. The Iraqi 155 GCT were mostly destroyed they did not fight in 2003.
Kuwait also received 18 vehicles (only 17 according to other sources) according to the JAHRA 1 contract, delivered just after the Gulf war. They were equipped with the CTI inertial fire control system and are currently in reserve.
Saudi Arabia also received 51 AUF1 vehicles. AUF2 vehicles mounted on the T-72 chassis were demonstrated in India and Egypt.

In the 80s, the armament system was deemed insufficient, especially the range. GIAT was responsible for incorporating a new 52-caliber long howitzer. The range passed 42 km using rocket-assisted munition. More importantly, the loading system allowed a rate of fire of 10 shots/minute with the capacity to fire grouped salvos, that impact the target simultaneously.
The AUF1T version introduced in 1992 was an intermediary version equipped with a modernized loading control system, while the auxiliary electrical generator was replaced with a Microturbo Gévaudan 12 kW turbine.
The AUF1TM introduced the Atlas fire control system, tested by the 40th Artillery Regiment in Suippes.
The AUF2 final version was based on the AMX-30B2 chassis, equipped with a 720 hp Renault Mack E9 engine with increased reliability compared to the previous powerplant. More importantly, the turret was modified in order to be mountable on the chassis of the Leopard 1, Arjun and T-72. At least one T-72/AUF2 vehicle was presented at an exposition for export. The roof machine-gun was standardized (7.62 mm AA-52). In total, 74 vehicles were converted by Nexter to the AUF2 standard starting in 1995. These were deployed in Bosnia. The 155mm GCT can be deployed in 2 minutes and can leave in 1 minute. 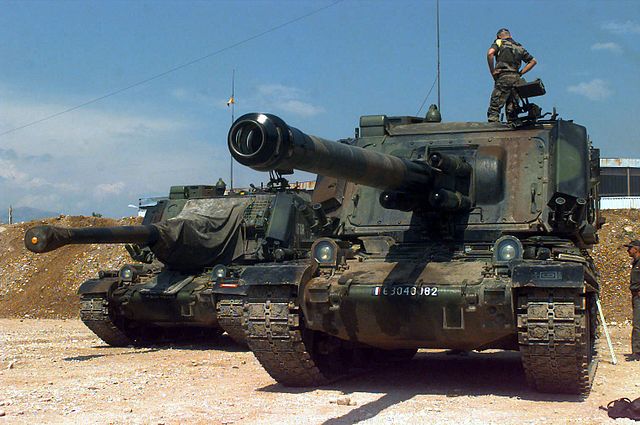 The Iraqi vehicles were the first to see service. The French AUF1 vehicles were deployed for the first time in Bosnia-Herzegovina. Eight AUF2 were deployed on the Igman mountain plateau in 1995 and participated in a bombing campaign (Operation Deliberate Force) in September against the positions of the Army of the Serbian and Bosnian Republic which threatened the security areas controlled by the UN. The intervention of these vehicles of the 3rd battery of the 40th Artillery Regiment and of the 1st Marine Artillery Regiment proved decisive, having fired 347 rounds. 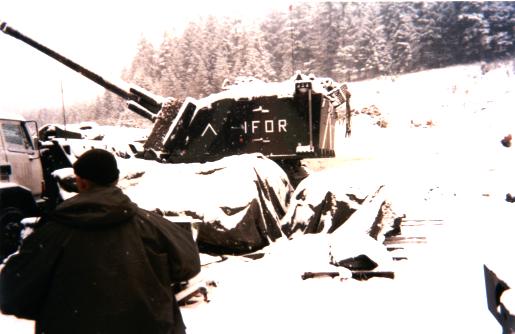 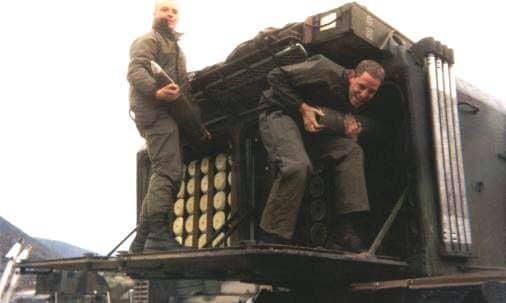 1st class Boucher and L. Hirlimann stacking 42kg ammo and charges separately – Author Ludovic Hirlimann CC licence Source
Currently, the 155 GCT vehicles are being retired and replaced by the CESAR system, which is far less costly in operation. In 2016, the ground army had 121 155 mm cannons, of which only 32 were GCT vehicles. However, their total retirement into the reserve is planned for 2019.

Auf F2 in UN colors
All illustrations are by Tank Encyclopedia’s own David Bocquelet.

The turret seems pretty comparable to the FV4005 Stage II turret. And there are pretty obvious reasons why. Though the cupola is completely new and orignal from the Stage II turret, and the sloped turret front…