In the early 1950s, the American military’s quest for a powerful new heavy tank was well underway. The T28, T29, T30, T32, and T34 projects had all ceased in favor of the 120mm Gun Tank T43, which eventually became America’s last heavy tank, the M103.
While still in development as the T43, however, there were parallel projects competing for the role of America’s next heavy tank. One of these projects was the 120mm Gun Tank T57. It used the same hull as the T43, but incorporated new technologies for the turret. The turret was of the oscillating kind, but it was also outfitted with an autoloading mechanism.
In the Army Development Guide of December 1950, both the T43 and T57 were expected to more than meet the requirements of the military and be a worthy adversary of Soviet armor such as the infamous IS-3. However, in the Tripartite Conference of Armor and Bridging of October in 1951, it was recommended that a 155mm gun armed tank be developed instead.

A mockup of the T58 Heavy Tank. Photo: Presidio Press

A list of recommended characteristics for this new heavy tank was outlined in a paper on the 18th of January 1952. Such recommendations included a gun that exclusively fired HEAT (High-Explosive Anti-Tank) or HEP (High-Explosive, Plastic. Otherwise known as HESH – High-Explosive Squash Head) rounds. This paper also recommended the construction of two prototype turrets complete with autoloaders and 155mm guns for installation on T43E1 chassis. The resulting vehicle received the designation of 155mm Gun Tank T58.
On the 10th of April 1952, a contract was drawn up with United Shoe Machinery Corporation of Beverly, Massachusetts for the design, development and manufacture of the two pilot turrets.

The hull that was used for the project was the same as that of the 120mm Gun Tank T43, which would later be serialized as the M103, America’s last heavy tank. Armor on the hull was the same. The cast ‘beak’ was 3.9 – 5.1 in (100 to 130 mm) thick.
An 810hp Continental AV1790 12-cylinder air-cooled gasoline engine propelled this chassis to a speed of around 21 mph (34 km/h). The tank’s weight was supported on seven road wheels attached to torsion bar suspension. The drive sprocket was at the rear while the idler wheel was at the front. The idler wheel was of the compensating type, meaning it was attached to the closest roadwheel by an actuating arm. When the roadwheel reacts to terrain the idler is pushed out or pulled in, keeping constant track tension. The return of the track was supported by six rollers.

The T58’s turret was one of the largest oscillating turrets ever designed, at approximately ¾ the length of the hull. Changes had to be made to the T43/M103 hull to accommodate the new large turret. When initially tested on one of the hulls, the turret bustle would collide with the mufflers of the main engine and auxiliary generator located on the engine deck. To fix this issue, the mufflers were relocated 20-inches (51cm) to the rear. A new travel lock was added to the deck to accommodate the larger gun.
This turret had similarities to the T69 medium tank prototype, in that its roof had multiples ways of ingress and egress. The turret roof was constructed from two removable plates. The rear plate was bolted in place, while the front section, like the T69, was hinged and could be opened outward by use of a hydraulic piston. The large opening made it easier to exit the turret in an emergency. In the open position, this opened section also provided a shield for the crew while evacuating. These sections were designed to be easily removed to permit installation of the autoloader mechanism and other components.
A ventilator was placed at the rear-right of the turret atop the bustle to vent gases and smoke produced when the gun is fired. 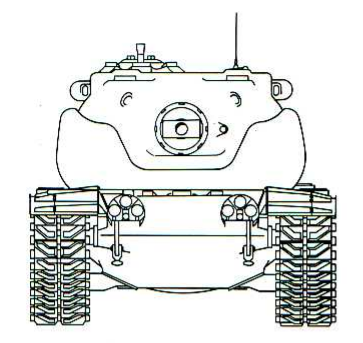 Line drawing of a face-on view of the T58. Note the size of the turret. Photo: Presidio Press

A cut-away view of the inside of the T58’s turret. Photo: Presidio Press

Originally, it was planned to utilize the 155mm Gun T80. This proved unnecessary as the chosen ammunition for the gun was of the chemical type and did not require the high-velocity granted by the T80. Designers instead opted for a lighter weight version of the lower velocity 155mm Gun T7, the gun developed for the Heavy Tank T30. Firing HEAT through this gun, the maximum armor that could be penetrated (angled at 0 degrees) was 16 inches (406mm).
This modified version of the T7 was originally designated as the 155mm Gun Howitzer T7E2. It was later changed, however, to ‘155mm Gun Howitzer T180’. There was no actual change to the gun, just a change in nomenclature. The T180 differed greatly from the original T7 though. The breech block was changed from a horizontal to a vertically sliding type. A bore evacuator (fume extractor) was added towards the end of the gun, and a T-shaped blast deflector installed on the muzzle. The gun tube wall was thickened and the chamber lengthened about an inch (~25mm) to accommodate the plastic closing plugs used on the cartridge cases of the two-part ammunition.
Unlike the T57 that had a rigidly mounted gun, the T58 was outfitted with a four-cylinder hydro spring recoil system in a mount designated the T170. There were 2 springs to each side of the breach. To save space and remove the need of extending the length of the turret, the recoil of the gun was limited at 12 to 14 inches.
Secondary armament consisted of a coaxial .30 Cal (7.62mm) Browning machine gun, and a .50 cal (12.7mm) Browning heavy machine gun mounted atop the commander’s cupola. The oscillating turret provided an elevation of 15 degrees, with a depression of 8 degrees. The original specifications included a second coaxial machine gun, but this was not included.
The main gun was aimed via periscopic sights. There was one lens on each side of the turret, known as ‘frog’s eyes’. These types of sights were used on many American tanks from the early 1950s onwards, including such tanks as the T69, M48 and M60.
The armor on both the collar and upper part the turret was extremely thick, but exact measurements are unfortunately unknown.

The 155mm gun was fed by an autoloading mechanism located in the turret bustle. It was not too dissimilar to the one used on the T69 medium tank prototype, consisting of a 6-round cylinder magazine with an incorporated rammer. On the T69, it actuated up and down during the loading sequence. On the T58, due to the size and sheer weight of a fully loaded magazine, the cylinder was fixed in place.

Two diagrams looking at the front and back of the auto-loading mechanism. Photo: Presidio Press
The loading sequence was thus: The loader used an internal, electrically powered hoist attached to the turret roof to remove one of the 95 pound (45kg) shells from the ready rack and insert it into the loading tray of the cylinder. The round was then slid into an empty cylinder chamber. The loader then selected the requested ammo type by manually rotating the cylinder with a hand crank. The separately-loading ammunition (projectile then charge) was rammed into the breach as one unit. After firing, the empty propellant cartridge was ejected back into the cylinder, where it was removed by the loader before the sequence began anew.

The crew consisted of a Commander, Gunner and Loader located in the turret and Driver in the front of the hull. The Gunner was located at the front right of the turret, the Commander sat behind him under a vision-cupola. The Loader was positioned on the left of the turret under his own hatch.

Work on two pilot turrets continued into 1956 despite numerous design changes during production and delays in obtaining and producing various parts required for assembly. By this time, however, trends had shifted, and a tank such as the T58 was no longer thought a necessary to the military.
The T58 project, along with the T57 and many other projects, was canceled on the 17th of January 1957. Following this outcome, both pilot turrets were scrapped. All that survives today are a few photos and government reports.

Illustration of the 155mm Gun Tank T58 by Tank Encyclopedia’s own David Bocquelet.

I really hope that wargaming will add this monster:)

They have, any differences between the T58 and T57 in-game are internal.

Is the one in WoT the 120mm version? 155mm would be Extremely powerful for a heavy tank.

It would make a good tier X turreted tank destroyer. Similar hull armor to the m103 and the same turret armor as the T57.

hey thanks for posting this! I think the american heavy tanks are really interesting!

I’m kinda curious. Are there plans to make an article about the T32 Heavy Tank?

it’s in the works
TE Moderator

I want to point out that, for one, the “mockup” does not look like a mockup. And secondly that the “mockup” features the same serial number on the side as that of the released pictures of one of the turrets mounted on a hull (without the gun).

I therefore believe the “mockup” is a (likely non functioning) prototype. But a prototype nonetheless.

I believe that this is a mistake, though I’ll have to see the original source which is Hunnicutt’s Firepower to see what the caption says though from what I recall it was pretty vague. That photo of the turret on the T43 chassis without the gun was originally suppose to be in the article ages ago however, we forgot to implement it.

i hope war thunder adds this

i saw in a photo https://bronpancernafb.wordpress.com/2015/11/06/t58-heavy-tank-amerykanski-prototypowy-czolg-ciezki/ of whats seems to be a t58 mini mockup model but what i noticed is that there was m60 like capula is this a diffrent version of the turret? (im shure that is not a t54e1 turret)