Sweden’s MBT that never was

The Strv 2000 project was intended to fulfill Sweden’s need for a modern main battle tank (MBT). In 1984 the Swedish government began to look into replacing the Strv 103 and Strv 104 tanks it had in service.
The intent was to assess the feasibility of a Swedish design, as well as to look foreign designs. These were to be either to be built under license in Sweden or ordered from a foreign manufacturer. The vehicle that would be chosen would come into service around the year 2000, hence the name of the Swedish prototype.

In the late 1970’s, the Swedish Military began to shift from a more defensive focus in their armored fighting vehicles to more of an emphasis on main battle tanks.  The driving force behind this call for a new tank was Colonel Bjorn Zickerman, who was also instrumental in helping develop the Ikv 91 in the 1970’s.
In order to find a new vehicle, the idea was to compare several modern MBTs such as the M1A1 Abrams or Leopard 2, to a prototype tank developed within Sweden. In 1984, work commenced on the Strv 2000 project. 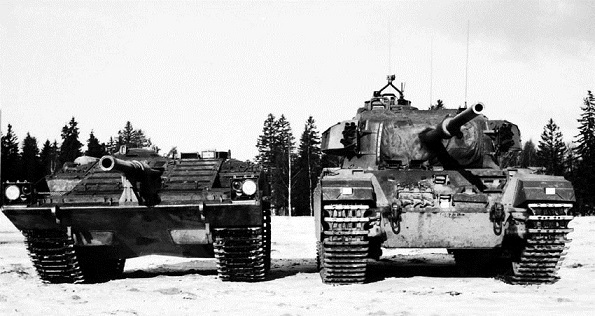 The tanks in service with the Swedish army at the start of the Strv 2000 project, the Strv 103 and the Strv 104 (modified Centurions)
Sweden had several requirements as to what the Strv 2000 would need to be, regardless if it was a foreign vehicle or developed domestically. This new vehicle was to have an emphasis on crew safety, as well as the survivability of the vehicle. These were to take precedence over all other elements such as armament and mobility. In order to keep training simple, the vehicle also had to be simple to operate.
In addition to this stipulation, there were three main objectives that the Strv 2000 had to meet. Firstly, it would need to be able to fire in any direction while moving. This could be of concern for lighter tanks, or for tanks with a very large and cumbersome main weapon. Secondly, it was to have good visibility all around the vehicle for the crew inside. Thirdly, there had to be a high survival rate of both crew and the vehicle if the ammunition storage compartment were to be hit or explode.
In order to develop a domestic design, Swedish defense industries first looked back to recent Swedish AFV prototypes under the UDES project in the 1970’s. The prototypes developed in 1984 were designed to meet “Hotstridsvagnar”, or potential and projected AFV threats that may be faced in the future. The two levels used in this project were Hotstridsvagnar VI, equivalent to the T-80, and Hotstridsvagnar VII, equivalent to the second generation T-80.
Making comparisons to these vehicles, and finding how to best combat them guided the development of Swedish prototypes. In 1985, the industry was able to present 3 different ideas for a modern tank built in Sweden. The first would be a traditional MBT layout (turreted tank) with 4 crew members, the second was an MBT with a compact turret and 3 crew members, while the third proposal was another turreted MBT with 3 crew members.

Initially, the use of the 120 mm (4.72 in) cannon was seen as most favorable for the Strv 2000 project. However, some thought was put into using a larger 140 mm (5.51 in) cannon in order to achieve better armor penetration. The 140 mm cannon was shown to have 25% to 50% better armor penetration (up to 800 mm/2ft7 of penetration) and twice the muzzle energy of the 120 mm cannon. However, it also came at a cost. First of all, the 140 mm rounds were very large, so fewer of them could be carried and an autoloader was essential.
It was also an unproven weapon for an MBT. It would require a lot of time, money and effort in order to get a properly functioning weapon system. In order to address the issues of a limited number of rounds stored for the 140 mm gun, a proposal was made to mount a 40 mm (1.57 in) cannon to the side of the main gun. This would serve to engage targets that did not require the larger weapon. This concept could greatly enhance the performance of the tank, as it would have a heavy hitting weapon for well-protected targets, and a smaller but very effective and well-supplied weapon for softer targets.

Armor for the Strv 2000 had to have excellent ballistic protection as well as a low infrared signature. The Swedish solution for increased protection was to have a basic steel hull with armor sections added to it externally. These blocks of armor would be easy to replace in the event of a hit and could absorb more energy. In 1989, a composite armor research project was begun, which looked at how different materials and combinations of materials reacted with different projectiles. In order to best protect the crew, the engine was placed in the front, with all the crew in the back. The ammunition storage also was contained separately from the crew, and would explode outwards from the vehicle if ignited. This was done with the use of “blow out” panels that would vent the explosion. 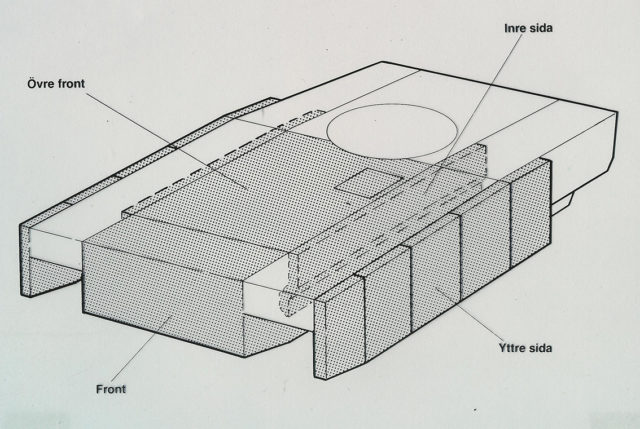 The armor layout of the Strv 2000, clearly showing the side and frontal modular armor panels. These were practically ERA blocks, but also effective against kinetic penetrators. Credits: Ointres.se

After Sweden had assessed the M1A1 Abrams and Leopard 2 in 1989, it was found that the older requirements, such as the maximum ground pressure and deep wading capabilities, were made obsolete by newer tank technologies. The new MBTs were shown to have powerful enough engines, strong and efficient transmissions, and tracks good enough to allow them to traverse the difficult Swedish terrain with ease. Thus, fording and track width requirements were dropped from the needs of the domestic design.

The T140/40 version was the only one to be turned into a full-scale model and came nearest to achieving production of all the Strv 2000 designs. It was to be armed with a 140 mm cannon, mounted centrally, and a 40 mm autocannon independently mounted on the left side. Two machine-guns are also featured in the plans, one coaxial with the 40 mm and one on the commander’s hatch.
Both the cannons were served by an autoloader, 29 shots being available for the main gun, and 148 for the secondary. The large caliber ammunition was held in a drawer-like storage container at the rear of the hull, which could be ejected in case of detonation. The vehicle also had two flare launchers, which were to be used to illuminate targets at night. The vehicle was not fitted with night vision equipment. 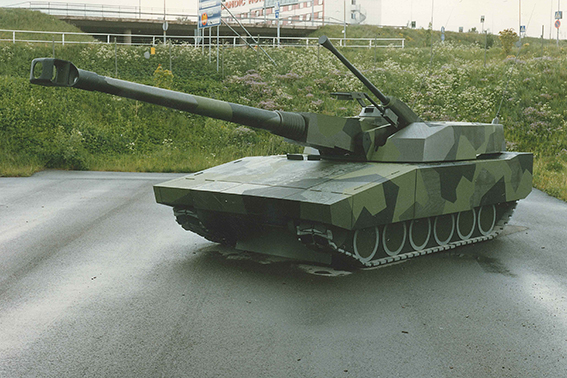 The T140/40 mock-up, showing the secondary 40 mm autocannon. Credits: Ointres.se
The frontal protection should have been equivalent to 800 mm of RHA against kinetic penetrators and 1200 mm against HEAT rounds. This was achieved with the use of modular ERA plates which were placed at a certain distance from the body. Also in order to help protect the crew, the 1500 hp engine and the transmission were placed at the front of the vehicle.
The 3 crewmembers were all placed on the right side of the vehicle, with the driver in the hull, the gunner in the turret front and the commander just behind him, having the most elevated position. It can be argued that there is a rather large blindspot on the left side of the vehicle.
However, in the end, the production of the Strv 2000 T140/40 would have been costly and slow to implement, and given the changing geopolitical climate, it was abandoned in favor of a foreign design.

This vehicle was designed to be more conventional and use already existing parts and knowledge. This meant that it would have a 120mm main weapon and a crew of 4. The focus of this design was to show an alternative vehicle that could be developed and produced quickly and cheaply.

This vehicle would be based on a strengthened Strf 90 chassis, but have a different turret mounted on top. This meant that it would be cheap and easy to build, but would sacrifice functionality and protection. The turret was intended to house a 140mm gun with an autoloader. Due to its large weapon but weak armor, it would most likely fill more of a tank hunter role rather than that of an MBT.

This was a design incorporating an unmanned turret that would have housed a 140mm main weapon along with a 40mm cannon, just like the configuration in the T140/40 and L140. This would be a great benefit as it would reduce the size of the vehicle, thus creating a smaller target, as well as reducing the chance of the crew being harmed by a hit to the turret. 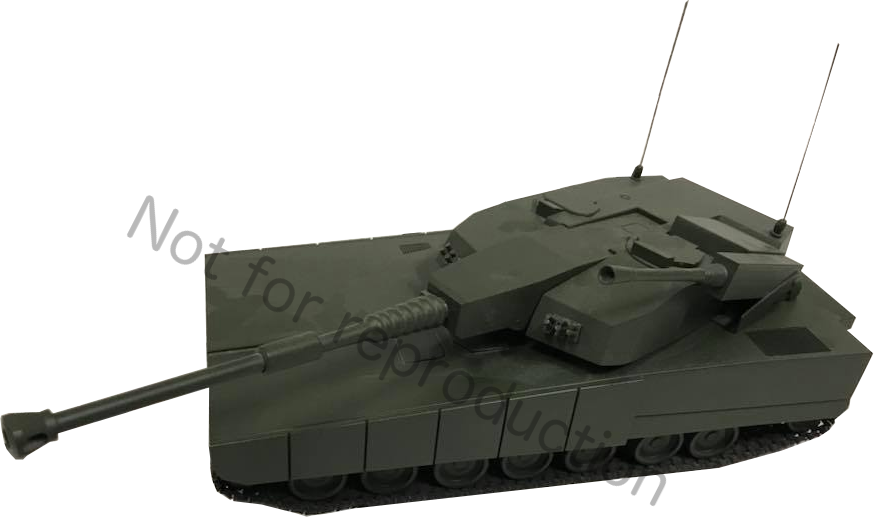 An official model of the Strv 2000 T140/40 showing a different secondary armament configuration. Image courtesy of Per Kjelltoft and Ed Webster.

In 1987, a report was published outlining the recommendations with regards to choosing the next MBT for Sweden. The report suggested that Sweden pursue the T120B and 140/40 prototypes, but still keep the option for a foreign tank purchase open in case if plans for government spending were to change in the future. If the military budget were to be cut, it would be much cheaper to pursue a foreign vehicle. If this was the case, options should be kept open for Swedish industry to build the vehicles, or at least components of them, as well as build any desired variants. This would be done so as to not weaken the strength and skill for military industry within Sweden. 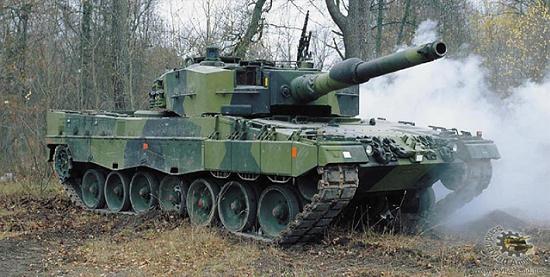 The Leopard 2A4 was chosen for license production in place of the local designs, as the Strv 121.
Another report was issued in 1990. In those 3 years, the military continued looking into which foreign vehicles could be bought, as well as fleshing out the T-140/40 prototype. The choice was dependent on the military budget. Since the T140/40 had a lot more work ahead of it to actually get to a functioning prototype and have an industry set up to build it, it would be a slow process and require a lot more money than deciding to go for another vehicle.
In 1991, a unanimous decision was made to purchase the Leopard 2 and build it under license in Sweden. This was seen to be the best compromise, as it gave Sweden a satisfactory vehicle at a cheaper cost than developing their own, but the industry would still benefit as it would be built locally.

The best source for the Strv 2000, the Ointres site (in Swedish)

Very fascinating to read about this project and a fantastic 3D model too!
Best regards!