During WWII, Sweden had been neutral whilst sandwiched between the invading Germans in Norway and the Soviet offensive in Finland, the latter probably being of more concern to Swedish authorities. Both Axis and the Allied powers were aided during the conflict, Germany was allowed to transport the whole 163rd Infantry Division, along with all its equipment and supplies, from Norway to Finland to fight the Soviets in June-July 1941 and iron reserves were continued to be sold all the way up to 1945. On the other hand, military intelligence was passed on to the Allies, Danish and Norwegian clandestine resistance groups were trained on Swedish soil and from 1944 onward, Swedish airbases were open to Allied aircraft. Despite this neutrality, afraid of a potential invasion, Sweden developed a number of tanks influenced by Czechoslovakian designs (such as the Stridsvagn m/41) and some indigenous designs in the period leading up to the war and during the war itself. Along with this, Sweden possessed a powerful navy which could have dissuaded an invasion.
After the end of the war, sometime between 1946 and 1947, Swedish military authorities sent personnel across Europe to acquire intact or semi-intact German tanks for the purpose of testing. The aims of these testings were to see how anti-tank mines fared against heavily armored tanks and how well Swedish anti-tank guns performed against modern heavy tanks.
The first tank they acquired was a Panther at a tank depot outside Versailles, with a Königstiger, also known as Tiger B, as their next objective. Finding one of these famed tanks proved to be harder than anticipated, until August 1947, when one was found in Gien, south of Paris. A burnt-out example found in Normandy had previously been rejected, as it did not meet the requirements of the Swedish authorities. By the end of November of that same year, the Königstiger disembarked in Sweden.

27 November 1947, Swedish authorities inspecting the recently arrived Königstiger in Stockholm harbor, with the ship that transported, the Swedish cruiser Tre Kronor, it in the background.

Testing and its journey

The Königstiger was transferred to the P4 Regiment, also known as the Skaraborg Regiment, in Skövde, 265 km (164.7 miles) west of Stockholm. There is no indication as to how the vehicle was transported to Skövde. Once there, work began to put the tank in running order, during which, a couple of German hand grenades were found within its hull. It would seem that the German crew or personnel in charge of the vehicle had it in mind to destroy it rather than allow it to fall into Allied hands. After its restoration, some sources suggest that the L71 KwK 43 8.8 cm gun was removed for testing, provided that suitable ammunition could be found. However, later photographic evidence suggests otherwise, and that unless the gun was removed, then re-fitted and then removed for one last time, the gun remained attached until early 1949. 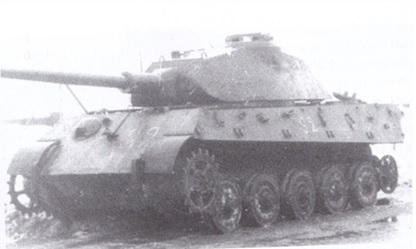 The tank as it arrived in Skövde in December 1947. Note the missing tracks.

The Köingstiger following restoration and ready for testing
In late 1948, it was decided to move the tank to Karlsborg testing area, a roughly 60 km to the east. This operation proved to be of gargantuan scale. Due to the weight of the vehicle, a turretless M4 Sherman, the tractor unit of an M-26 Dragon Wagon, a Terrängdragbil (TGB) M/46 (a Swedish version of the Brockway B666), a 10-ton recovery vehicle, a fuel truck, two cars for personnel and four motorbikes were needed to transport it. As the roads were not built for this kind of weight, and the abundance of forests, the journey took five days. Once in Karlsborg, testing resumed. 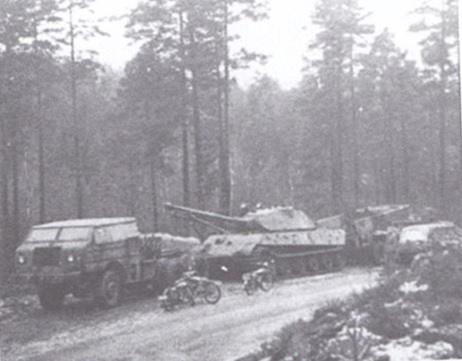 A photo of the caravan transporting the King Tiger III tank from Skövde to Karlsborg. 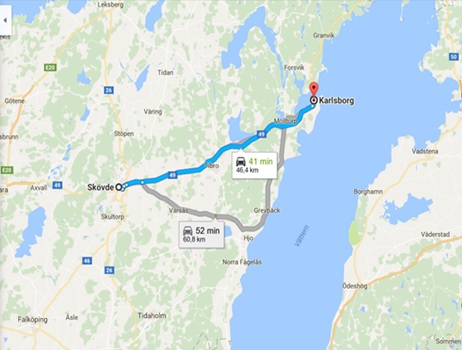 A Google Maps screenshot of the Skövde to Karlsborg journey.

Throughout 1949, the vehicle was subject to mine detonations and a barrage of tests to gauge the strength of the King Tiger armor and the effectiveness of Swedish ammunition. By November-December, this intense firepower turned the vehicle into a small pile of scrap that would have fitted into “the backseat of a Volkswagen Beetle” and what was left of the hull was scrapped and the turret sent to the firing range in Kråk to be used for target practice. The gun, which at this point had finally been removed, was kept for some time in Karlsborg until it was sent to the Bofors HQ in Karlskoga, where it remained until eventually being scrapped in the late 80’s. Unfortunately, two weeks later a member of the Swedish Armour Historical Society arrived enquiring about the gun. Had they arrived a fortnight earlier, the Kwk 43 would quite likely be found today at Arsenalen. The only pieces remaining are the original engine, the gearbox and the rear hatch. The engine and gearbox can be found at the Swedish Tank Museum after they were found in the workshop of a famous British collector in 2010 by British police.

It is unusual to have an origins story after the fate section. There is a debate over which German unit the Swedish Königstiger had previously belonged to and there is no general consensus in the historiography. The ‘S2’ marked on the side of the hull offers no explanation towards its origins and it is unknown if they are German, French or Swedish markings.
There are at least three theories surrounding the mysterious origin of the tank. Firstly due to the fact that the tank is equipped with the older curved pre-production turret, which is often referred to as the Porsche turret, a one-piece monobloc gun tube, a binocular “Turmzeilfernrohr 9b/1” sighting telescope and armoured covers over the wading equipment, it could have belonged to either the PanzerKompanie Funklenk 316, which was part of the Panzer Lehr, or the 1./sPz.Abt. 503, due to the fact that both of these were equipped with Königstigers of these characteristics and fighting in France in 1944.
However, the argument against both these theories is that both units fought in Normandy far away from Gien where the tank was found. The counter-argument would say that the tank could well have fought in the Normandy area, but that it was later transported down to Gien by the French as war bounty.
The third theory suggests that the Swedish Königstiger could have been one of the initial prototypes of the Tiger B and that the French found and captured it at Kummersdorf development center south of Berlin. Nonetheless, this seems implausible. There are three known prototypes of the Tiger B, V1, V2 and V3 with one of them, the V2 being kept at Bovington and has been in British hands since the end of the war. The earlier version, V1, shares the lack of Zimmerit on the hull with the Swedish Königstiger, but it’s flat front mudguards with hinged side extensions, makes it different with the Swedish one, which has curved ones without hinges. Furthermore, the V1 had an MP-Stopfen, or pistol port, on the left side of the turret that does not feature on the Swedish model. All this makes it almost impossible that the Swedish Königstiger was one of the prototypes.
Another striking feature of this Königstiger is the unique exhaust pipes at the back of the tank, which are larger and horizontal rather than vertical as in most Königstiger variants. This could be due to a field conversion from a Panther tank. The tank lacks any Zimmerit protection on  the hull (although photographic evidence would suggest there are traces of Zimmerit on the front of the turret) which adds another peculiar feature to this tank. The whole truth about the Swedish Königstiger may never be known. 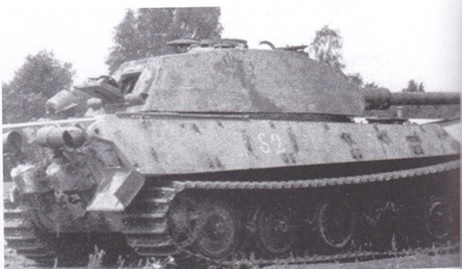 The ‘S2’ emblem on the side of the hull. 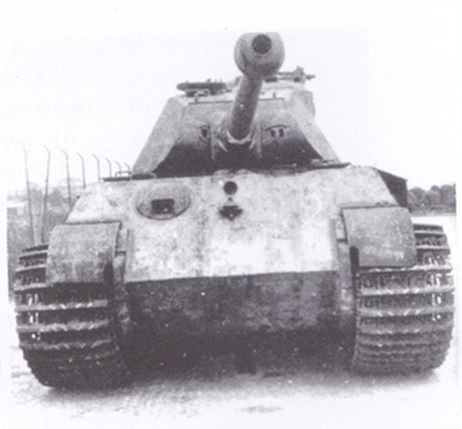 The front of the Königstiger where the curved pre-production turret (‘Porsche turret’), curved front mudguards and lack of pistol port can be seen.

The rear of the Swedish Königstiger with its unique exhaust pipes. 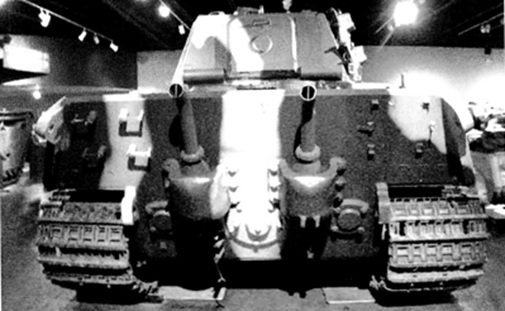 The rear of a regular Königstiger for comparison. 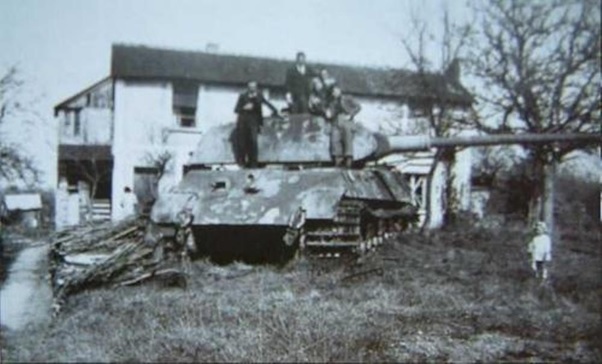 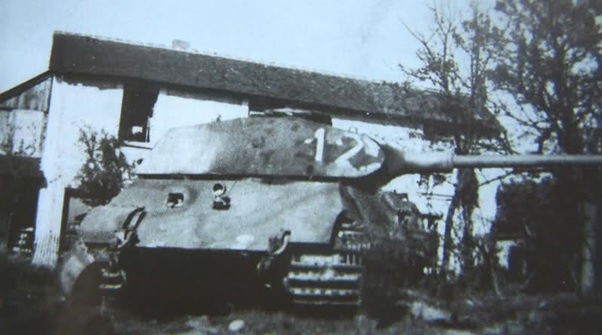 Two photos of the Tiger B named ’12’ from the PanzerKompanie Funklenk 316. This example is considered to be the Swedish Königstiger by several online tank forums, however, there is no concrete evidence supporting this.

Swedish Koenigstiger based on the tank shown in the available photos.

5 replies on “The Swedish Königstiger”

Its important to remember that in 1949 the Tiger II did not yet have the same historical significance it does today, and likely would have been viewed as just another obsolete tank from the last war (albeit one with enough armour to be worth testing you AT weapons against to see if they’re up to snuff).
TE Moderator

Mark Felton has made a video about this topic at YouTube and has ripped off the text you have written. If he stole someone else’s work for his YouTube video then I assume that he stole someone else’s work for his lousy book and for his PhD thesis. He is making money off your work, you should copyright strike his video at Youtube unless the clown and parrot is working for you.

Hello AB,
Thank you for notifying us! After checking his video, we have arrived at the conclusion that he did not plagiarise and that he has a large amount of information in his video that we do not cover. However, there are indeed certain passages which are clearly taken from our article and adapted. We have sent him a message and asked him to cite us when he does.
All the best!