The Republic of China Army (ROCA) (Pinyin Zhōnghuá Mínguó Lùjūn) is linked to the fundation in June 16, 1924 of the the National Revolutionary Army. For starters, we can go as far back as the Collapse of the Qing Empire in 1839-1912. A politically very turbulent country-continent, boasting the oldest civilization, assaulted by the West for the best of the XIXth Century (Throughout the the Opium Wars, Taiping rebellion, Tongzhi Restoration, First Sino-Japanese War, The Boxer Rebellion and The Russo-Japanese War). The collapse of the Qing dynasty in 1912 was just the summit of at least 70 years of national humiliations in the hands of foreign powers, securing their hold through unequal treaties. Many withing the well-edcated Chinese middle and upper class, not part of the traditional Qin elite, saw the problem layed within the very fabric of the Empire and its corrupted elites. The 1912 revolution saw the birth of the Republic of China, marked by a symbol, the sun on blue sky, complete contrast to the Dragon on golden yellow, the Imperial color since centuries.


The Republic under attack

The collapse of the Qing Dynasty in 1912 led to a republic being declared. However, this was not to last. When Yuan Shikai was elected president in 1913, his rule was fairly autocratic. He even declared himself Emperor in 1915, attempting to restore the monarchy. Provincial officials refused and began to rebel, and Yuan eventually died of uremia on June 6th, 1916. Fractured, divided, and lacking a strong government, local warlords began to assert autonomy, thus plunging the nation into the so-called Warlord Era. In 1925, the famous (or perhaps, infamous) warlord Zhang Zuolin acquired the first tanks to be operated by non-colonial militaries in China.

These were Renault FTs sold to him by the French, which were locally armed with 37 mm (1.46 in) guns or ZB-33 machine guns. At this time, two parties with originally similar doctrines, the Nationalists (KMT/GMD) and the Communist Party (CCP), were vying for power. Both parties wanted a united China, had a Leninist political doctrine, and were democratically centralized. Encouraged by the USSR, who actually believed the KMT to be the most viable party, the parties partnered into an united front. In 1925, the Nationalist leader, Sun Yat-sen died of cancer, which can be seen as a turning point in the KMT-CCP alliance. Chiang Kai-Shek rose to power in the KMT, and was virulently anti-Communist. During the so-called “Northern Expedition” (1926-1928) from their base in southern China, the Nationalists intended to take back and unify the whole of China from rebels, warlords, and foreign imperialists.

The Northern Expedition (1926-1928) In February 1926, the Nationalist Army reached Shanghai. At this point, a crucial ideological note must be made. The CCP at this time was led by leaders more inclined to Soviet style Communism, which stressed the role of the urban proletariat, contrary to Mao, who would rise to prominence in later in the mid-1930s, during the Long March. With the focus of the CCP in the 1920s being on urban proletarians, this meant that the CCP organized strikes and uprisings of urban workers in Shanghai, in order to help the Nationalists capture the city.

For unknown reasons, the Nationalist Army stalled and did not support the workers in Shanghai. Some scholarship has suggested that this was an attempt by Chiang Kai-Shek to dampen Communist power, but this is not proven. In March, 1927, the CCP organizes strikes involving 600,000 workers, and only then did the Nationalist army take Shanghai. In April 1927, the so-called “White Terror” began, whereby the Nationalists began to purge China of Communists and similar unions. With a new police force, and rumors of the involvement of Warlords, foreigners, and organized crime, Chiang Kai-Shek began attacks on Communists, activists, and trade unions. The involvement of foreigners and organized crime was, no doubt, exacerbated by Chinese Communist scholarship, but the events of 1926-1927 proved one thing – a war between the CCP and KMT was inevitable."

Renault FTs (from the Fengtian Army circa 1931) Note: The KMT is reported to have acquired, in various ways, 36 Renault FTs, several of which came directly from France. It seems therefore likely that 33 FTs were inherited from the Fengtian Army. These FTs were captured by Japan in 1931 and used by the Kwantung Army (a defense unit of the IJA) at the Mukden Incident, 1931). Renault FT with 37mm gun (several in 1927, during the Northern Expedition).

V-C-L Light Amphibious Tanks (whilst the KMT were sold some by Vickers, four of these were presumably appropriated from the Canton Provincial Government and took part in the Battle of Shanghai, 1937.)

Taking the advice of their German advisors, the KMT began seeking out arms contracts. Eventually, the Nationalists imported 60 tanks from Vickers between 1930 and 1936 and are as follows: 12 Vickers Mark VI Machine Gun Carriers with six trailers and spare parts (1930), 12 Vickers-Carden-Loyd Light Amphibious Tanks sold to the Canton (Guangdong) Provincial Government (1933). These were presumably appropriated by the Nationalist Army, as the total number of tanks fielded by the KMT in Shanghai numbered about 60, and excluding these 12 VCL Light Amphibious Tanks, the number bought by the KMT to that point only reached 48.

The Second Sino-Japanese War had its immediate roots in Beiping (Beijing) due to local tensions between the Imperial Japanese Army (who, under the agreement following the Boxer Protocol 1901, were allowed to station troops in Beiping) and the local Chinese garrison. To cut a long story short, on July 7th, Japanese troops were firing their weapons around Wanping Fortress.

The local Japanese commander then declared that one of his men had gone missing, and demanded to search Wanping. The accusation was that the Chinese 29th Army of General Song Zhueyan inside Wanping must have kidnapped or killed him. Previously, the Chinese garrison did as they were told, but on this occasion, they refused to comply. Small gunfights broke out at Marco Polo Bridge, and these gunfights were usually over as quick as they started with ceasefires signed by local military and government officials.

However, Chiang Kai-shek was concerned that this might be evidence of further Japanese expansion into China, and took matters into his own hands. Chiang began moving his troops from central China up to the north in order to be ready for further Japanese aggression. The Japanese saw this as a threat, and by late July, both the Japanese and the Chinese were mass-mobilizing for war.

Japan was reluctant to declare war officially, but sent the elite Kwantung Army (along with local allied armies) into Beiping and Tianjin on July 26th – both of which were under Japanese control by the end of the month. Fighting in Hubei province was left to local military commanders such as Song Zhueyan. After various meetings within the Kuomintang, Chiang decided to meet the Japanese invasion with his best soldiers in Shanghai.

Chiang used his best troops to defend Shanghai, the 87th and 88th divisions, who were trained by German advisors. An estimated 200,000 Chinese soldiers from across China poured into the city and took up defensive positions. In early August, the Japanese began landing in Shanghai from the Cruiser Izumo. The National Revolutionary Army attempted to destroy the Izumo through a daring aerial attack on 14th August.

The Izumo sustained damage, but something went wrong with the bombing mission – numerous bombs were accidentally dropped on a very busy civilian area (which was also the International Settlement), and an estimated 1000 people were killed.

The Japanese realized that Shanghai would be a major battle and amassed 100,000 troops by early September, including an estimated 300 tanks of various classes (according to photographs, this included many Type 89 Yi-Go tanks). The city was heavily bombed by the Japanese air force in order to soften up resistance, but early attempts to capture the city by the Japanese caused stalemates along the narrow streets, and both sides began to dig-in. It was at this point that the Chinese began using their Vickers tanks. 
After the heavy losses in 1937 at the Battle of Shanghai and the Battle of Nanjing, the KMT appealed to the USSR for arms sales. As a result of the Sino-Soviet Non-Aggression Pact, signed in August, 1937, the USSR began supplying the KMT’s newly formed 200th Division with Soviet equipment. 83 T-26s were sold, along with small, but unknown numbers of BT-5s (at least 4), BA-27s (at least 4), BA-3/6s (unclear which model, at least two), BA-20s (unclear which model), and possibly some BA-10Ms (which are possibly misidentified BA-3/6s or BA-10Ms of the Manchukuo Imperial Army). Despite sounding impressive, Soviet arms shipments to Spain were much greater, and such a small number of AFVs would never cover the vast expanses of China from further Japanese gains. Note: Reports of BAIs and BA-10Ms also exist, but there are no known photographs of these. BAIs seem particularly dubious. BA-10Ms were used by Soviet forces at Khalkin Gol (1939) and in the Invasion of Manchuria (1945). However, at least one BA-10M saw service in the Manchukuo Imperial Army, likely leading to confusion in sources. 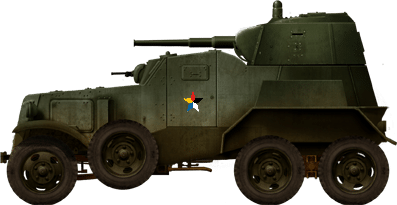 BA-10M of Manchukuo Imperial Army, February, 1940. On the crew door is a military star version of the ‘Five Races Under One Union’ flag. This vehicle was captured by the IJA at Khalkin Gol. This may explain the insistence of modern scholarship on the existence of ‘Chinese BA-10 armoured cars’. 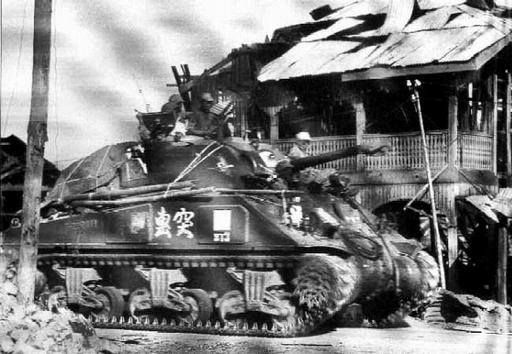 Figures given by “The Tank Division of the People’s Liberation Army, 1945-1955” report that in May, 1946, the KMT had the following vehicles in service: The number of CV-35s is rather dubious, and it is believed that all Vickers Mark E Type B tanks were lost in combat at Shanghai, 1937.

Notes: Some of these vehicles may actually belong to the Kwantung Army (a unit of the IJA based in Manchuria). Other vehicles are suggested to belong to the MIA (such as “some French and English armored cars”), but a lack of evidence prevents further discussion.
A variety of locally built armored cars belonging to the Manchukuo Imperial Army are shown in photos, but there is no given names for these vehicles (let alone any substantial research into them).
A variety of railroad-borne tanks and armored cars are likely to have been in MIA inventories, too, but are not listed here due to a lack of evidence. The KMT also laid theor hands on unknown numbers of Type 97 Chi-Ha and Type 97 Chi-Ha Shinhoto, Type 95 Ha-Go, Type 94 TK, Type 97 Te-Ke, Type 95 So-Ki, Type 91 So-Mo and Type 92 Jyu-Sokosha. 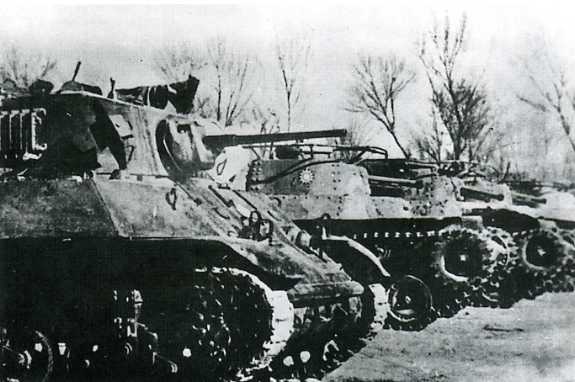 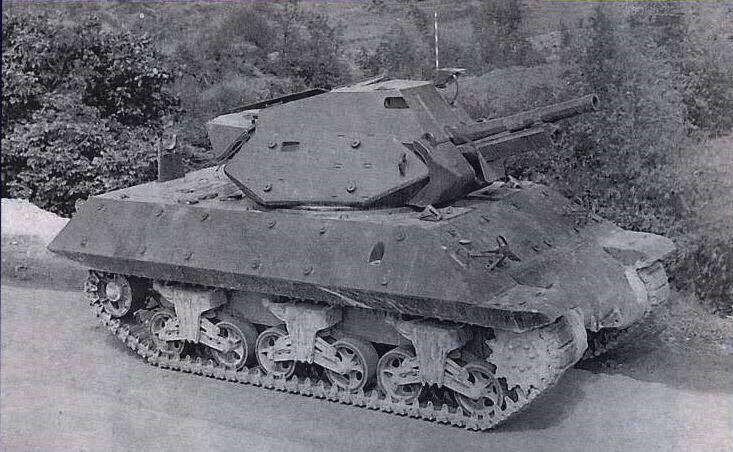 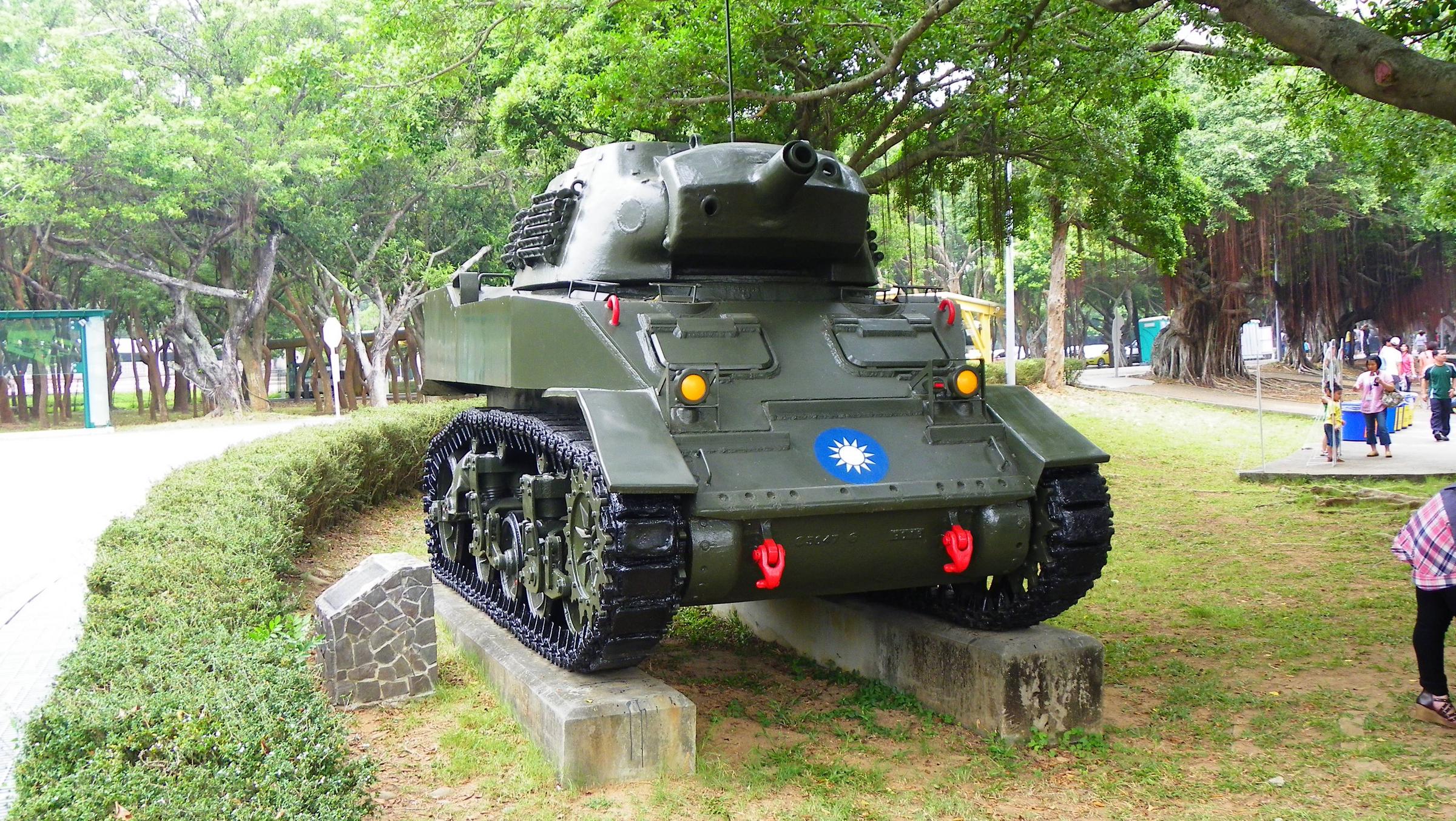 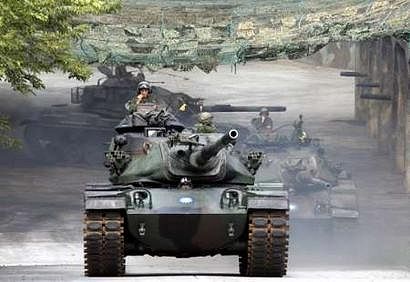 
The Republic of China acquired hundreds of M48A1/A2s in the 1960s. They were modernized to the M48A3/ROC standard in a specific way, still, have short operational range. M48A3 and M48/E48B variant with lower fuel capacity, Operational range lowered to 194 miles (312 km).

M41D: M41 modified by the Republic of China Army with a new Detroit Diesel 8V-71T diesel engine, enabling the tank to reach speeds of up to 72 km/h (44.7 mph) and increasing its range to 450 km (279 miles).[7] The turret was altered to carry a Taiwanese-manufactured variant of the M32 known as the M32K1, as well as a co-axial Type 74 (FN MAG) general purpose machine gun.[7] The M32K1 has a fume extractor and a different muzzle brake, and has been upgraded with thermal imaging sights.[7] 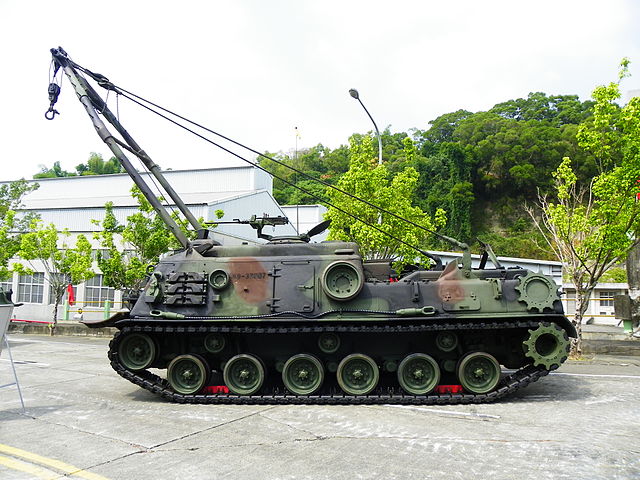 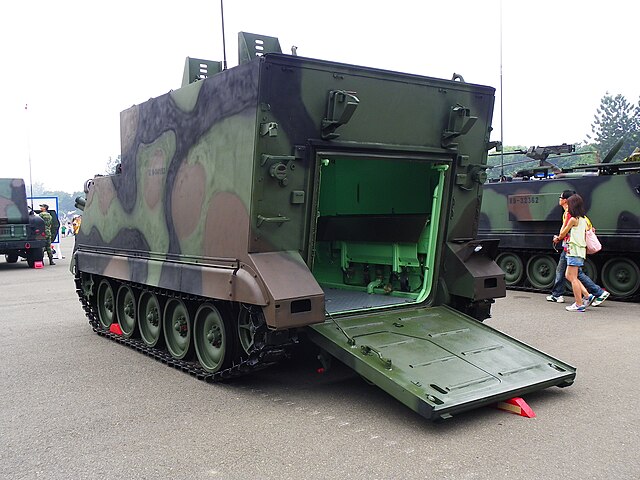 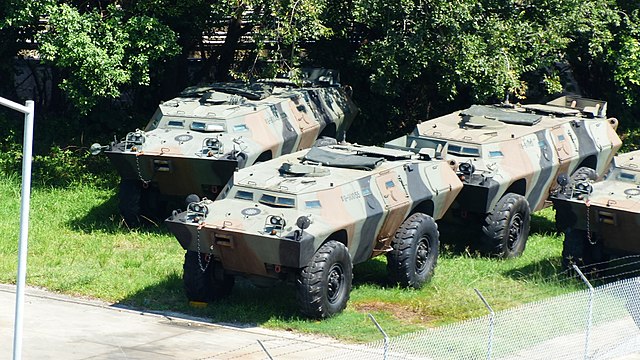