With massive quantities of weaponry, including Soviet tanks provided by USSR at the end of World War II, Poland as a satellite state and within Soviet sphere of influence was able to quickly create a potent Armoured Force. The Polish army was until the early 1950s under the command of Marshal Konstantin Rokossovsky, with the title "Marshal of Poland", also Minister of National Defense. His ties with Moskow ceased after the Polish October political movement in 1956.

Under a new leadership the country was now narrowly linked to the line defined in Moskow, and in 1947 the Cold War was on, as events in Berlin degenerated quickly. The Warsaw pact also officially known as the Treaty of Friendship, Co-operation, and Mutual Assistance, was a reaction to the constitution of NATO in 1955. It was signed on 14 May the same year and Gathered East-European nations previously liberated by the Red Army, namely Bulgaria, Romania, Yugoslavia, Albania, Hungary, Czechoslovakia, East Germany and of course Poland, as the treaty was signed in its capital. This treaty and organization will be the black beast for NATO until 1990. It was at first the traduction of countries armed with the same standards in equipment, tactics and operating procedures. But as times goes by, some nations developed gradually their own production (license production and derivatives) especially industrial nations like Poland, Czechoslovakia, Hungaria, Romania. Tito's Yugoslavia took a radical departure early on and never joined the treaty.

A Polish-built T-54AM. They had "L"-shaped fuel cells and additional ZIP stowage bins on either side of the turret.

The LWP (Polish Army) took part in the suppression of the 1968 Czechoslovakian revolt, the famous "Prague Spring". Columns of tanks and motorized rifle troops headed toward Prague and other cities, meeting no resistance. The bulk of it were the 28,000 troops of the 2nd Army, Silesian Military District (general Florian Siwicki).

The Polish ground army was subdivided between the:

In addition there was the Polish Territorial Defense Forces, with its Headquarters in Warsaw:
These internal Defense Forces of the Ministry of National Defense, comprising 4 infantry brigades and a regiment, 1 logistic brigade under the National Defense Commission and the State Committee for Territorial Defense, the four regiments of the Ground defense units of the IDF and a Pontoon Unit, plus three regiments of IDF Engineering and Rescue equipped with armoured vehicles.

Polish BWP-1s in manoeuvers in the 1980s

Although procedure and tactics were borrowed from Soviet Union instruction and defined also by similar equipment, the local industry soon found ways already in the 1960s to license-produce Soviet tanks for the Polish People's Army. Indeed, 2,855 Polish T-54AMs were manufactured in the Bumar-Labedy from 1956 to 1967, differing by minor details for Soviet tanks. They formed the backbone of the Polish Army, replacing older T-34/85s which were locally modernized in the 1960s as the M1 and M2 and kept in reserve until 1990.

The 1980s political events were instrumental in Poland's history as they certainly contributed to a loss of authority from Moskow and was one of the knockdown blows that bring the Soviet empire to collapse in 1989-90. The Solidarnosz (an independent trade union) movement funded 17 September 1980 at the Gdańsk Shipyard under the leadership of Lech Wałęsa came as a revelator of the will of independence that surged in many eastern block countries at large. The movement grew up to create massive strikes in 1988, and despite the reaction of the regime led by hard-liner Marshal Jaruzelski in ended in September when the local communist party was forced to recognise the movement as a political party of its own, and the next year the first national elections were organized in June 1989, which led to the victory of Lech Wałęsa (which became later the first president of post-cold war Poland and new Senate). The disintegration of the USSR later only confirmed both a full independence of Poland and its opening to the West.

In all these events, the Army seemed neutral, although subjugated by Marshal Jaruzelsk an intervention was feared, but never appeared as it seemed no order were given to make a "crowd-control" in the old Soviet style, with tanks rolling in the streets and over barricades. In the following years, the Army was left with an obsolescent, massive park of AFVs and little funds that imposed a deep re-organization.

In the late 1980s the Polish Army modernized all of its obsolete park of T-55 tanks to the T-55AM Mérida standard. This successful conversion convinced the Polish General Staff that other Soviet-designed models manufactured locally cold follow, better suited to the requirements of the Polish Armed Forces. By late 1988, modernization of the Polish-built T-72M1 (obiekt 172M-E5) licensed T-72M or obiekt 172M-E3 an the sub-variant command tank T-72M1K (Polish designation T-72M1D). The Polish Research and Development Centre of Mechanical Systems or "OBRUM" (for Ośrodek Badawczo-Rozwojowy Urządzeń Mechanicznych) base din Gliwice, was chosen as design bureau, somewhat underfunded as Generals still looked to acquired instead Soviet last upgrades of the T-72 such as the T-72S or even the modern T-80.

After the political changes of 1989 and USSR dissolution, all purchases came to a halt. Domestic design of a new Polish tank was now favoured and given full support at all levels. The first design was the "Wilk" ("wolf"), later cancelled and further developed as the Twardy. The monumental task was to offer the Polish Army with a new version adapted to modern warfare. Fixes concerned its most urgent deficiencies such as mobility, armour, fire control and gun stabilisation as well as night vision aiming systems. A local electronics industry soon developed to support the project (see the modern Polish Tanks page).

Some were of the model 1946 (Improved V-2-34M engine, new wheels, and details), But it seems it was modified locally as the M1 equivalent to the Soviet Model 1960 (refurbishing program with the V-2-3411 engine an other details). The most advanced, modernized for export, was called Model 1969 (T-34-85M) with night driving equipment, T-54/55/62 standard stamped roadwheels, additional fuel and the 1960 upgrades) but the Polish version was different (called M2).

The Polish T-34-85M1 was locally refurbished and Similar to the Soviet Model 1960, but recoignisable to its 'skeleton' type roadwheels. The T-34-85M2 was the Polish refurbished model parralel to the Soviet Model 1969, which had extra exterior storage, but also a deep-wading kit and snorkel, and still the old "spider" style roadwheels. In addition to these versions, Poland also developed derivatives, such as the CW-34, a local variant of the VT-34, and the WPT-34 in the 1960s, the main Polish repair and maintenance vehicle. It was given a brand new superstructure comprising a a crane, large-diameter telescoping snorkel and a large-spade type earth anchor at the rear. This convertion was also applied to older T-34 tanks in mark and SU-85/SU-100 tank destroyers as well. This success conducted to more engineering vehicles in the future, based on the T-55 such as the WZT-1/2 ARV/CEVs, IWT dozer/crane and BLG-60 AVLB (see below). 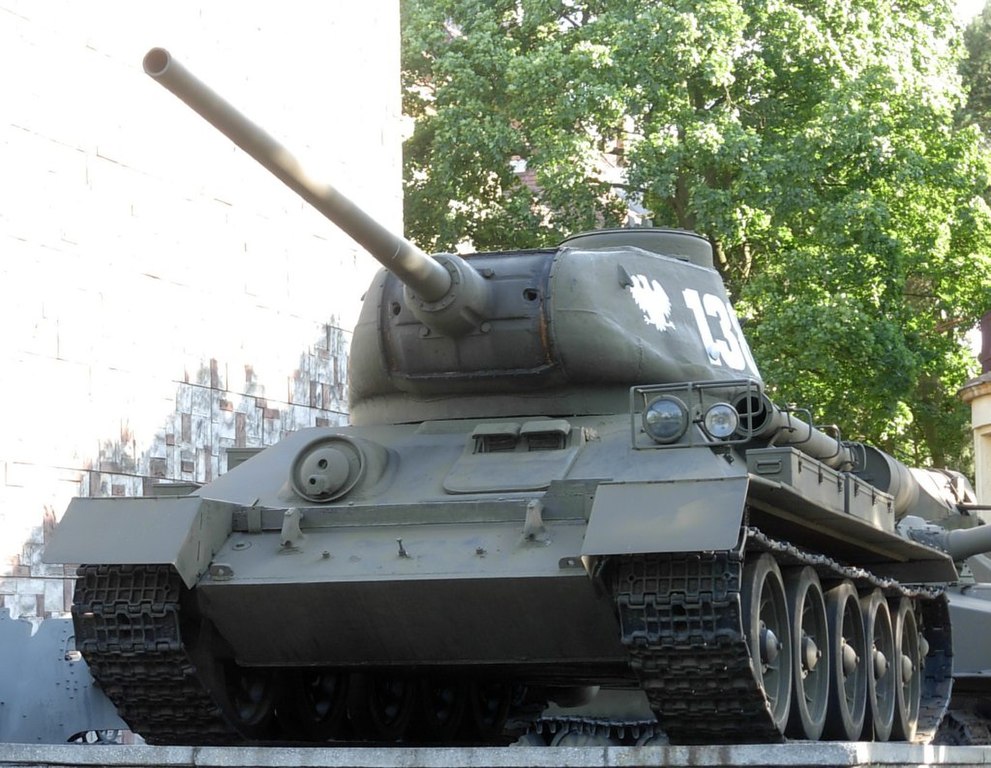 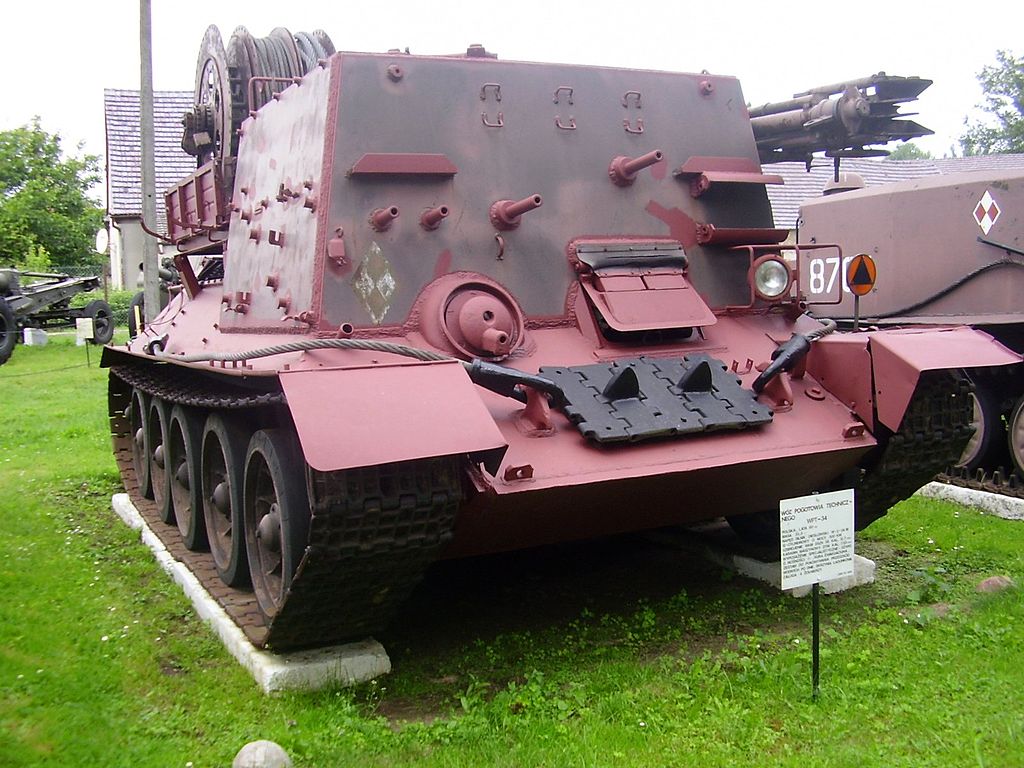 IS-3 Poland only received 2 IS-3s for testing and never introduced the type into service. However, one is kept at the Polish Armor Museum, having a marking with the Polish eagle.

T-72 Polish-built T-72A Jaguar. This Polish-built model was licence-produced since the late 1970s, mostly for export. Building quality was a plus compared to Soviet manufacturing standard and these were well received. Polish-made T-72G tanks had thinner armour compared to Soviet Army standard (410 mm equivalent for the turret). It is interesting to note that Polish Colonel Ryszard Kukliński passed to the CIA between a lot of documentation about the T-72 between 1971 and 1982. He fled to the US after being denounced, exfiltrated by the CIA. The M1 was built under licence by Bumar-Łabędy in Gliwice from 1982. They had rubber side skirts and 902W Tucha smoke grenade launchers. Late production models had an extra 16 mm steel plate on the upper glacis. The T-72M1 was the export version of the T-72A licenced in Poland (1983) with less KMT mounting points on the lower hull glacis plate. It had ceramic sand bars "kwartz" rods in the turret cavity, and the extra plate 16 mm (0.63 in) thick of special Steel as appliqué armor on the glacis. T-72M1D was its command variant. In 2009, there were still about 580 T-72 in service with Polish Forces: of which 135 were T-72A, 254 T-72M1 and 23 T-72M1. Poland also developed the greatly improved SJ-09 and “Wilk” prototypes for a future domestic production and as modernization upgrades for customers. This ended with the development of the domestic PT-91. However these were replaced gradually by German-built Leopard II tanks in the 2000s. 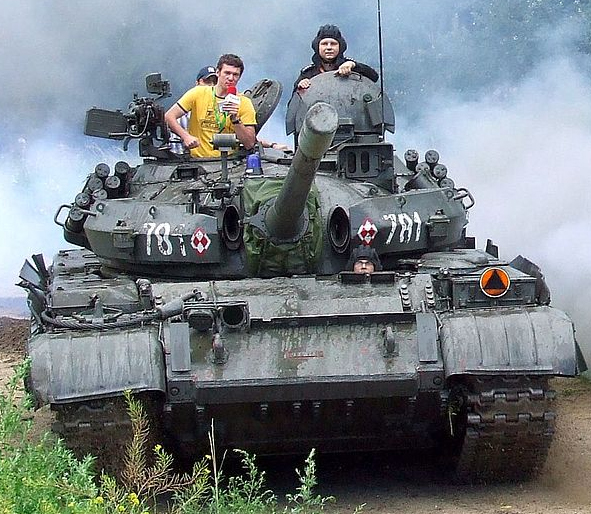 MT-LB & 2S1 Gvozdika (as well as other related vehicles such as the MT-LB and Opal) were produced in Poland by Huta Stalowa Wola under the name 2S1 Goździk. 2S1M Goździk – Version with special amphibious kit that increases the vehicle's amphibious capabilities. The 2S1T Goździk was a Version with a TOPAZ digital fire control system from WB electronics. The system consists of a FONET-IP digital intercom system, new digital radio, military GPS receiver, military computer and dedicated software. The same system is used on other Polish Armed Forces artillery systems like the AHS Krab, Dana-T and WR-40 Langusta.

BTR-60/70: Poland also operated these, like the local BTR-60PB with an additional radio set, and a few population control vehicles were built, fitted with a two-sided breaker, urban protection, OU-3 infrared searchlight, operated by the The Milicja Obywatelska and ZOMO units, and the Polish Ministry of Internal Affairs operated 25 vehicles later, little are now in service. Instead, Poland built and used the OT-64. Another lighter vehicle also used was the Hungariant-built FUG-440, close to the BRDM-2 (also used by Poland and modernized).