Armored fighting vehicle design is incredibly complex, with overlapping and competing requirements. These requirements often go way beyond the simplistic trio of mobility, firepower, and protection. These issues are exacerbated even further when it comes to amphibian vehicles, where the complications expand to include buoyancy, watertight seals, water propulsion, balance, and center-of-gravity, among other considerations.
One method of improving balance for an amphibian vehicle is a distributed drive system that spreads the weight of the elements around the vehicle. In 1982, the US Marine Corps Program Office released a Request for Proposal (RFP) for the development, manufacture, installation, and testing of an electric drivetrain in an M113 test vehicle for exactly this reason. This was to be one step in the tortuous development towards the Advanced Amphibious Assault Vehicle (AAAV) for the USMC.
After the issuance of the original RFP in 1982, several firms submitted proposals, but all of them were reliant upon very expensive advanced high-speed AC motors, and as a result, they were all rejected. Subsequent work by the USMC and the US Army Research Development and Evaluation Center (BRDEC) at Fort Belvoir, Virginia, was to focus on DC systems instead.
Another option for distributed drive came from the Rexroth Worldwide Hydraulics Corporation of Pennsylvania, which, in 1983, submitted its proposal for a hydrostatic drive to be fitted to a government-supplied M113 Armoured Personnel Carrier (APC).

Rexroth was to use its own hydrostatic drive with secondary regulation (abbreviated to HDSR), a unique type of drive for the 14-ton M113 APC.
The system started with a single variable displacement pump which controlled both the speed and torque of the drive motors. This system produced a constant pressure to the drive which made the system much simpler. The HDSR motors controlled the forward and reverse direction of rotation or counter-rotation turns on the vehicle, and thereby controlled the steering too. In this way, when turning, power is regenerated from the inside track and applied to the outside track to increase the turning force.
The system would also permit higher speeds than a conventional transmission and improved control for minor adjustments when driving.
The main pump was to be a Rexroth model AA4V250 axial piston pump with automotive control and there were two Rexroth model AA4V125EL motors per track.
The engine, in the form of a DDA 6V-53 diesel, delivered 300bhp. As such, the Rexroth system would enable the M113 to travel at speeds of up to 40mph (64.4 km/h) on a road and also to have improved acceleration over the existing M113s. With the regenerative steering the turning radius was calculated to be significantly improved too, from 200 feet (61 m) for the standard M113, to as little as just under 20 feet (6.1 m) at low speed and about 80 feet (24.4 m) at full speed, although the vehicle would become unstable when turning so sharply at that speed.

Rexroth was to design and fit its hydrostatic system in the M113 and then return the vehicle to the US Marine Corps (USMC) for evaluation. When the M113 was supplied, Rexroth was disappointed. It had been supplied with a filthy vehicle by the USMC, covered with mud and the interior was full of debris, which meant it had to be steam cleaned before Rexroth could even do any work on it. 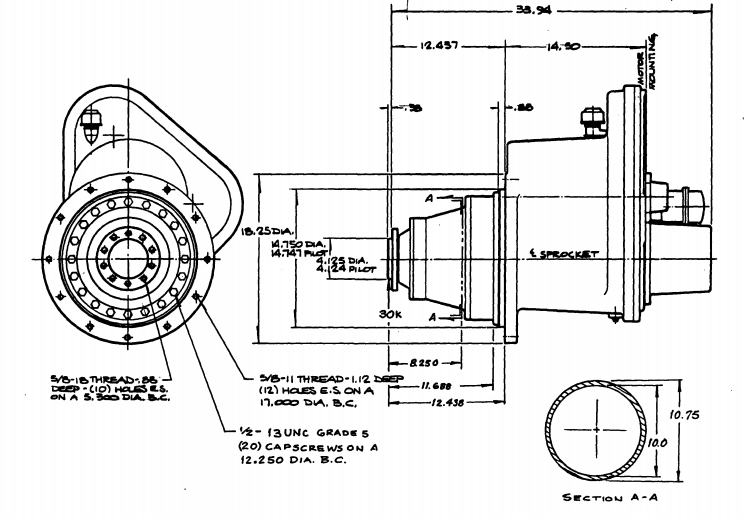 Newly designed 2-speed final drives from Rexroth. Source: Rexroth Corporation
Initially, the new final drives for the vehicle were designed to be as close to the motors as possible, but the motors had to be located in the front vehicle opening in order to gain access to them for maintenance. As such, it also prevented the main system pump from being connected to a conventional flywheel mounted pump drive, thus requiring it to be moved elsewhere in the vehicle. Luckily, as the existing transmission had been taken out, this main system pump was fitted into the space it left and connected to the flywheel mounted pump drive by means of a gear drive. Access to the main pump could be gained via the interior of the vehicle by means of the removable panel in the operator’s compartment.
For the final vehicle, the new final drives and their aluminum casings which projected out of the front were protected by means of commercial packing and coated with zinc chromate primer prior to painting to match the existing color of the vehicle. There was no requirement for waterproofing to enable amphibious testing as the test was to evaluate the hydrostatic drive only.
Steering was effected by means of a simple speed change lever moving from High gear to Low gear and vice versa, with the gear change taking under ½ second. Using this system, the M113 could accelerate from 0 to 20 mph (32.2 km/h) in under 6 seconds.
Work on the project began in Spring 1986, and, including build-time and testing, the entire program was projected to last just 4 months.

As it turned out, no further work was done on the project. The Rexroth transmission had worked fine, but the M113’s were out of date anyway. In a time of tight budgets, it was hard to justify changing the whole fleet of thousands of vehicles to a new transmission when the M2 Bradley Infantry Fighting Vehicle was coming into service. Only this one vehicle is known to have been converted to hydrostatic drive, what happened to it following the end of testing is not known.

This is totally awesome! This site has everything I need! 🙂
One thing, could you guys make an article about the Object 279? I love that vehicle but can’t find a whole lot of information about it.
Secondly, could you make a page about the M6A2E1 Heavy tank of the US? Thank you

Hello Greg,
The M6A2E1 article is ready and will be published soon.
Unfortunately, we are not working on an Object 279 article at this moment. But you can add it to our Public Suggestion List
https://docs.google.com/spreadsheets/d/1p0Ll9TITGDiF9_fdS-tv1797JBs0_-pB70ReE_kIRkE/edit#gid=1911430820
Also, in order to help us with illustrating and publishing, please do consider donating through Patreon or Paypal.
https://www.patreon.com/tankartfund
Paypal.me/tankartfund

Thank you very much!
Could you please tell me how to find the full text”Installation and Test of a Hydrostatic Drive Transmission in a Government Furnished M-113 Vehicle. (1986). Rexroth Corporation, Pennsylvania”?
Thank you very much!