Teledyne Continental was interested, like many other US firms, in the potential value of a large military contract for thousands of high mobility vehicles. When, in the late 1970s, the US Army wanted to replace its mixed fleet of utility and light vehicles with a new general purpose multirole vehicle, Teledyne took their chance. 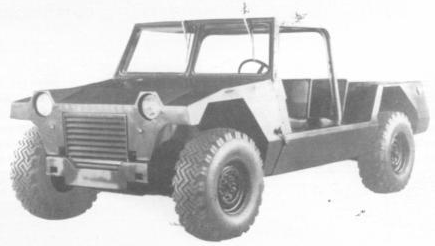 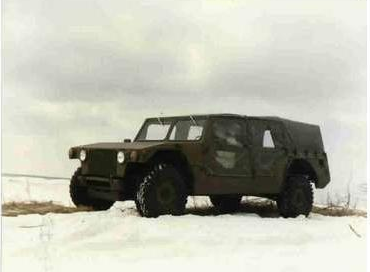 Teledyne Continental’s Cheetah HMMWV contender. Note how the sides are now flat and angled back slightly and that the headlamps sit under the line of the bonnet.
The Army released a letter of interest in July 1980 with final specifications being released in February 1981, when TACOM (Tank Automotive Command) once again changed the requirements for the HMMWV. They then sent the final specifications out to 61 manufacturers inviting them to bid and submit designs.

Teledyne Continental’s Cheetah HMMWV contender in cargo/personnel configuration.
Source: Wheels and Tracks #4
The final requirements for the HMMWV (1981) were:

Of the 61 firms solicited, just five submitted designs and just three were selected, and Teledyne was one of them. Teledyne, therefore, submitted their bid for the construction of 11 prototypes for testing at a cost of US$4 million dollars which, per the contract, were supposed to be ready by May 1982, although some sources state that their bid was not even formally submitted until the 22nd November 1982.
Those 11 prototypes would be equipped and tested in the roles of TOW missile carrier, ambulance, armament carrier, and shelter carrier, although some latitude was given in terms of how to interpret these needs.

Submitted proposal for the Teledyne Continental Cheetah as a Weapons Carrier showing the arrangement of the TOW system on this Weapons Carrier version. Source: Bill Munroe
The design of the General Products Division of Teledyne Continental was called the ‘Cheetah’. It had been designed by Mobility Technology International (MTI), California, in the mid-1970s and bore a close resemblance to the XR-311.
The design was interesting enough that, even prior to trials, it attracted interest from the Italian firm of Lamborghini who saw the potential for their own lucrative contracts supplying a mobile off-road vehicle to the Italian Army and possibly for export too. Lamborghini’s interest led to them eventually building their own version, also called ‘Cheetah’, and showed to the world at the Geneva Motor Show in 1977.
MTI though was actually a subsidiary of Chrysler who was also bidding for the same XM966 CSVP contract. Chrysler, therefore, sold the rights to the MTI Cheetah to Teledyne Continental which officially parted Lamborghini from involvement.
Despite the vehicle now being the responsibility of Teledyne, there were still issues regarding the design and rumors of legal action from FMC over just how similar this vehicle was to their XR-311 design. This concern prompted some redesign work to avoid legal action.
All this had taken place in a short period of time from the mid-1970s to 1977/78 around the time of the CVSP. The CVSP program was over by 1979 though, and the HMMWV program was to take its place. If an order for up to 3,800 from the CVSP was tempting, then the potential for over 50,000 orders from the HMMWV program was irresistible and the pressure was on to win this deal.

Teledyne Continental Cheetah in ‘Maxi-Ambulance’ configuration in 1982. The inwards angling sides of the normal vehicle body are apparent here. Source: Wheels and Tracks #4

Soft-top version of the Teledyne Continental ‘Cheetah’ with the weather covers fitted. Illustrated by Andrei ‘Octo10’ Kirushkin, funded by our Patreon campaign.

The Cheetah was a conventionally arranged truck with the engine in the front and built on a tubular steel frame with an all-aluminum body. The engine was a 5.9 liter Chrysler V8 connected to a Chrysler A727 three-speed automatic transmission.

Teledyne Continental Cheetah in utility specification with weather covers fitted.
When the 1979 specification for the HMMWV came out it made specific requirements, one of which essentially excluded the Cheetah from being considered – the petrol engine. As a result, the engine choice was changed to a 140 hp Volvo six-cylinder diesel and then to a 6.9 liter International Harvester V8 diesel engine coupled to a General Motors model 475 three speed turbo-hydramatic transmission. 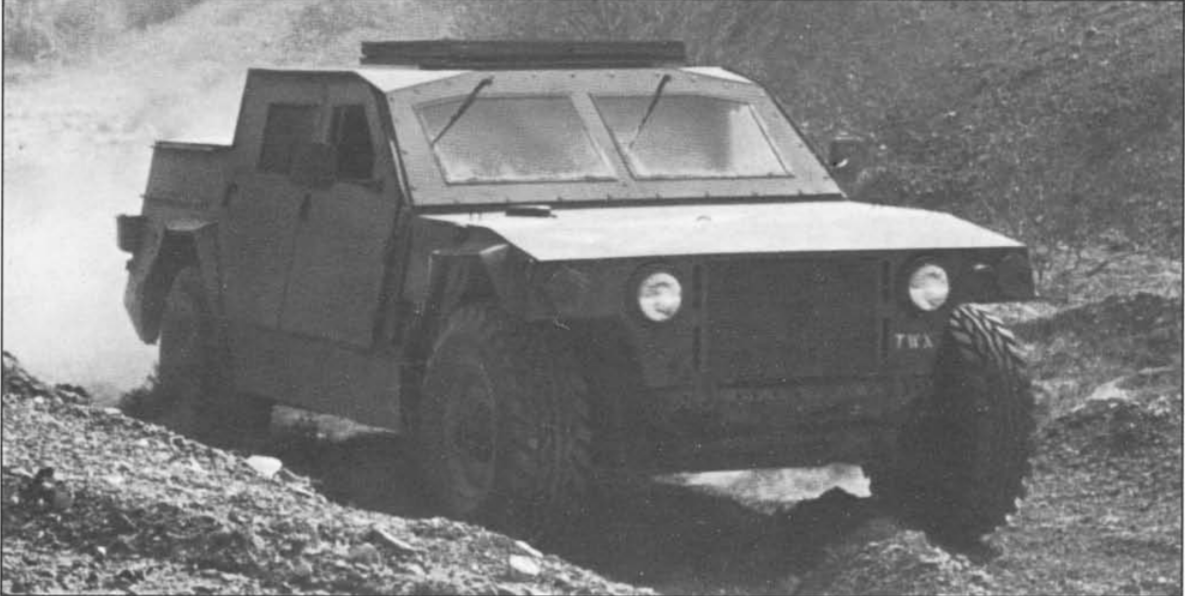 Looking more Mad Max than HMMWV this is the Teledyne Continental Cheetah HMMWV during trials in 1982 in Weapons Carrier configuration albeit with no weapons fitted. Source: Wheels and Tracks #4

As this vehicle’s development was a long drawn out failure, there is little accurate information to work out all of the variants of the Teledyne Cheetah and to describe them. Had they won the Army contract, the most common vehicle body used would have been the utility vehicle, fitted with simple canvas or plastic/rubber doors and roof to protect the crew of up to 4 from the elements.
The weapons carrier had some ballistic protection but this was not considered at any time to be bulletproof and was merely to protect against shell splinters. On this version, the windscreen, which was two part on all variants, had square type ballistic glass fitted as opposed to the rounded-corner type of laminated glass windscreen on the unprotected vehicles. The armored doors and windscreen also had folding flaps to protect the windows and featured rectangular slits so the crew could still see out, albeit with a little more protection, although how practical these actually are is highly questionable. A large hatch was fitted to the roof of this version on which a variety of weapons could be mounted, most obviously the TOW ATGM system with a series of kevlar shields around it to protect the gunner. This TOW mount was later adopted on other vehicles, albeit with the kevlar panels. In true ‘Mad-Max’ style, the back of the weapons carrier had two large clamshell doors with could open outwards providing a small amount of protection for a further load or armament.
For the ambulance variant, Teledyne opted for a standard type of rigid body vehicle, a maxi-ambulance instead of a mini-ambulance as other competitors considered. The maxi-ambulance was large enough to take 4 full-length stretchers, causing the body to substantially overhang the rear of the vehicle. As a consequence, the rear was angled sharply upwards to prevent it from grounding if the vehicle was off-road and a small series of steps folded down to allow access.

The Teledyne Continental ‘Cheetah’ was finally delivered to the Army and rigorously tested in 1982 along with submissions by other company. Despite whatever features the Army may have liked, the Cheetah lost out for the HMMWV contract to the AM General design. It received no orders and is not known to have been marketed elsewhere. At least one of the original prototypes survives at the US Veteran’s Memorial Museum in Tennessee. 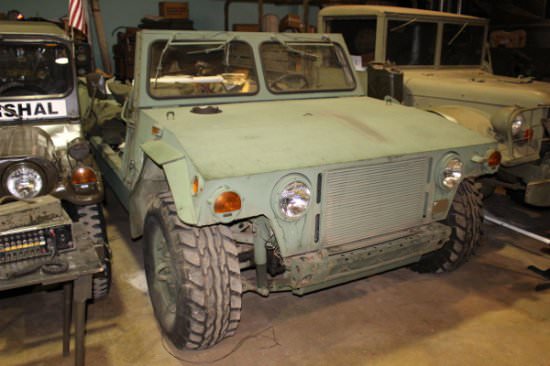 Curious… I own a prototype vehicle originally developed by Teledyne Continental Motors, Terrestrial Propulsion Division in 1984 as a Lightweight, Highly Mobile Weapons Carrier, Reconnaissance
and Scout Vehicle Prototype (“LFV”) for the United States Military. Mine is serial #2. Wondered if you have any info on it?

Thanks for this article Andrew Hill. I believe I have the only other 1982 XM-998 Teledyne in existence, my engine bay stamp is #13 and I was told it was the one they had in the Teledyne Facility that they mocked everything up on before it was sent into the field for testing, however, the speedometer shows over 14k miles. Right now I’m working on some final tweaks on the engine. It now has standard Humvee radial tires on it because the original bias ply had flat spots in them and were horrible over 10 mph.