The pressure placed on armored vehicle designers to keep down weight without compromising protection or performance is a driving force behind many AFV design choices. Much focus has been placed by designers on moving away from traditional steel armor to aluminium or even titanium and ceramics as an alternative. Whilst these can lower the weight of the vehicle without reducing protection, they often come with a very steep price tag.
One idea from the early 1980’s was the possibility of using a new generation of fiber-reinforced plastics to form the hull of armored fighting vehicles. 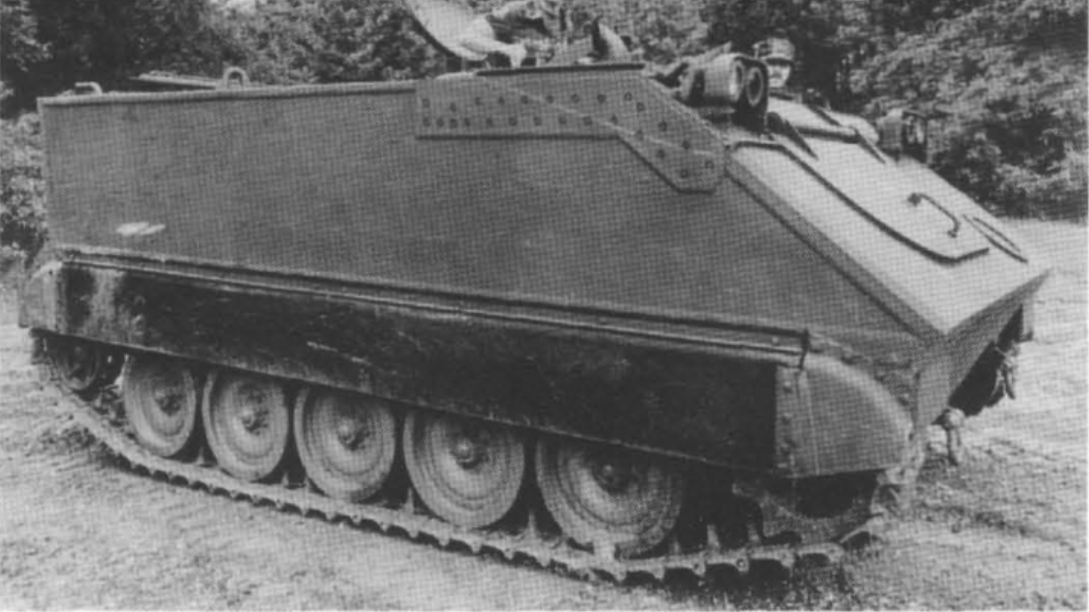 M113 FSD seen during trials for the US Marine Corps. Photo: Hunnicutt

The US Marine Corps in particular, with a role as a high mobility force carrying out amphibious landings etcetera, has a specific need for lightweight vehicles. In 1983, they awarded a contract to Food Machinery Corporation (FMC) to produce two M113 Armored Personnel Carriers (APC) made from composite plastics. FMC joined forces with Owens Corning Fiberglas to produce the two hulls for testing, which were ready by October 1985.
Further work on the composite hulled M113 was undertaken by Martin Marietta in Maryland between December 1983 and October 1986. All of this work was towards a project known as the Surface Mobility Program, or ‘SURFMOB’.

The M113 APC is well known for being protected by welded 5083 Aluminium armor. Little more than a basic armored box on tracks, the machine proved itself to be a reliable and adaptable platform for a variety of roles, albeit thinly armored with protection from just shell splinters and small arms fire. In the initial Statement of Work (SoW), the requirements for the design were relatively straightforward. The test vehicles were to feature a composite or mostly composite material hull using E-glass, and an armor configuration with aluminium covered ceramic tiles bonded to the GRP body. 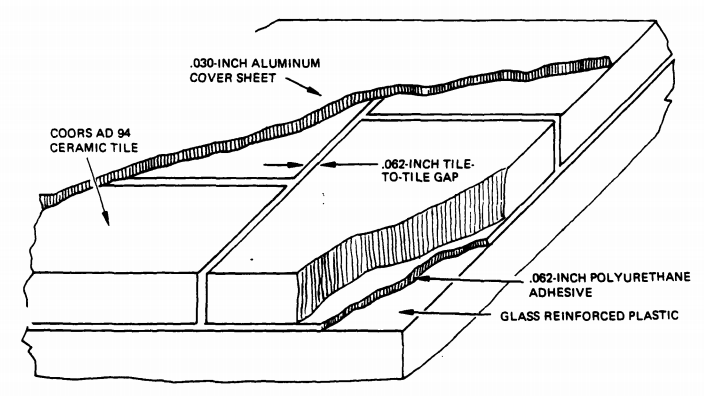 Armor layout as specified in the original Statement of Work. Photo: Martin Marietta

The new hull from Owens Corning was a composite made from a sandwich of closed-cell polyurethane foam clad on both sides with resin-bonded E-glass. On the outside of the vehicle were layers of Aluminium-Oxide tiles, providing a very hard outer skin and the bulk of the ballistic protection. The outcome was not a significantly lighter vehicle. Work on the composite M113 in 1999 elaborates on exactly what savings in weight were made. The overall weight was essentially the same but with an improvement over the rather basic armor of the normal M113. The side walls were 19mm thick, the roof 32mm thick and the floor panels 25mm thick. The Al2o3 tiles used were 12.7mm thick. Some aluminium components were retained for areas of high structural stress such as at the nose of the vehicle. 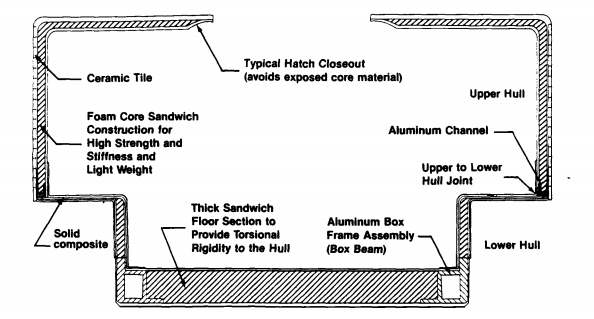 Martin-Marietta selected a slightly different type of composite for their design: glass reinforced plastic (GRP). The entire upper hull was made in one piece from GRP consisting of epoxy sealed woven E-glass joined to the bottom half of an M113 hull which was left as welded aluminium. Instead of using an M113 as a donor and cutting this piece off for their work, Martin Marietta instead made their own lower M113 half from 5083 Aluminium, cutting and welding the metal to exactly match those parts of the M113A1. 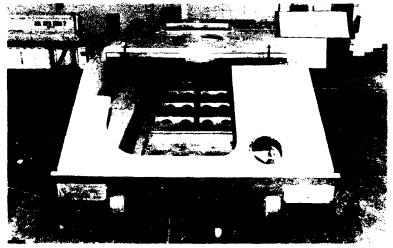 Upper GRP body attached to the Martin Marietta-built lower M113A1 half during the fitting process. Source: Martin Marietta.
Inside the vehicle, a ¼” (6.35 mm) thick aluminium bulkhead, identical to that of an M113A1, was fabricated and welded to the new lower hull at the bottom and the small horizontal plate with the driver’s hatch on the top. The aluminium roof beam was also added. This method provided a degree of rigidity to the design.

GRP hull during assembly. Photos: Martin Marietta
Armor for this design was to come from the addition of external Alumina ceramic tiles formed in 4” (101.6 mm) square tiles covering the front, sides and rear, which were covered and protected from damage by thin aluminium sheets. The total side thickness of this structure was not less than 0.75” (19 mm) made from 36 plies of 5×4 woven roving E-glass in epoxy resin. The roof, which had no ceramic tile ballistic protection, was thicker; made from 54 plies of 5×4 woven roving e-glass coming to a thickness 1.25” (31.75 mm) and was formed from two pieces. The first was the same thickness as the rest of the upper hull being uniformly thick with the sides. The second was an additional layer 0.5” (12.7 mm) thick bonded to the 0.75” (19 mm) thick roof to bring it up to 1.25” (31.75 mm). 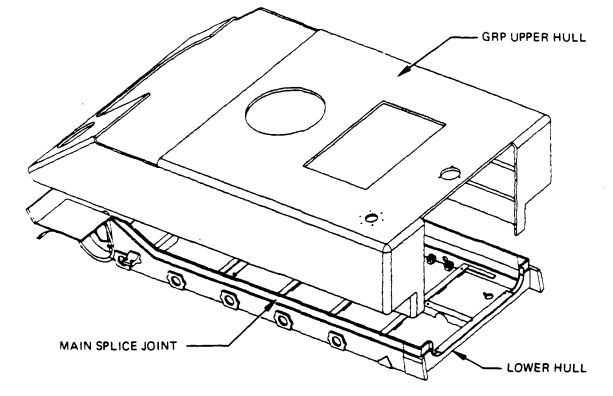 Two part construction for the composite M113A1. Photo: Martin Marietta
The area for the driver’s hatch was left off the GRP body as the material thickness would interfere with the hatch. That part was simply to be formed from the same aluminium as the original and just transplanted onto the GRP body. The same went for the commander’s cupola.
Joining the upper hull to the lower one was simple too. An overlap for both parts was provided and they were simply bolted together with a bearing plate on the outside of the GRP part and the joint sealed for waterproofing purposes.

Joint between the upper GRP body and lower Aluminium hull compared to the more complex jointing done at the front. Source: Martin Marietta.
The joint was slightly more complex at the front, complicated by the access door to the engine bay. The bolting system with the tiles adhered over the top was done in such as way as to prevent any further access to the tops of the bolts, as they were now enclosed. This is one of the key problems with all composite designs, the difficulty of repairability.

Front and rear of the bolting scheme. Photo: Martin Marietta

Illustration of the M113 GRP Hull Feasibility Demonstrator. Produced by Produced by Andrei ‘Octo10’ Kirushkin, funded by our Patreon Campaign.

Repair ease was considered during the planning phase with the categories of damage from perforating or semi-perforating fragments categorised along with ideas for different levels of repair. A field repair to a single point of damage, for example, would have involved a metal cup being inserted through the hole and bolted to the inside. Given the complexity of the interior fittings and layout, even the simplest repair would be complicated and the projection of elements into the interior could prevent parts from fitting again. That problem remained unsolved for the purposes of this study, but the ideas of how to fix at different levels were carefully considered and noteworthy. Even the smallest repair could take between 2 and 24 hours or longer for more serious work. Damage to the aluminium near to the GRP was even more complex. Although it could simply be welded, the heat transferred to the GRP caused serious damage to the material which would mean that should the aluminium lower half require welding it might be necessary to remove the entire upper half of the vehicle to do it or to use efficient heat sinks.

Crew-level of repair for minor perforating damage compared to the much more complex and involved repair of a major point of damage. Photo: Martin Marietta

One of the major drivers towards composite hulls was to save weight. The existing M113A1 hull was used as a baseline for the studies. The Owens Corning study took the weight of the M113A2 ‘Carrier Personnel Full Track Armored’ with the bare essential components such as engine, transmission, hatches, ramp, and final drive fitted to weigh 12,910 lbs (5,856kg). Their composite version was 12,710 lbs (5,765 kg). This meant they achieved 200 lb (91 kg) saving with a marginal increase in protection. As for just the bare stripped hull, the savings were non-existent, going from 7,540lbs (3,420kg) for the bare aluminium hull to 7,600 lbs (3,447 kg) for the composite version, an extra 60 lbs (27.2 kg). This apparent discrepancy may be due to the weight of the ramp which was not replaced with a composite version.
The Martin Marietta work using their own ‘M113A1’, which was compared to 1973 Army data for the original vehicle which yielded 3,300 lbs (1,500 kg) for the original vehicle’s aluminium structure which was being retained. The original armored parts of the M113A1 weighed 9,622 lbs (4,364.5 kg) on their own, but the GRP body though only weighed only 2,203 lbs (999 kg), the ballistic tiles added another 843 lbs (382 kg), and the necessary bolts for fitting the GRP body to the aluminium lower another 139 lbs (63 kg). All complete, therefore, the Martin Marietta vehicle with a complete lower aluminium section and GRP upper body weighed just 6,490 lbs (2,944.8 kg). 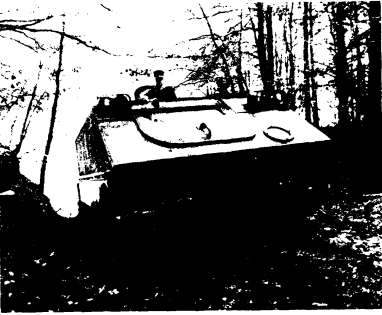 Ignoring weight issues, there was a more fundamental problem with the composite body M113. Just as was found during the same tests with the composite body for the M2 Bradley, the new plastic hulls exhibited significant longitudinal twisting during testing. In comparative testing though, the small M113 came out better than the larger M2 Bradley in this regard. When fitted with engine, hatches and equipment, etc. it simply showed less twisting along the longitudinal axis. Both designs showed themselves equally good at absorbing vibrations, with the plastic hull performing better than the metal versions.
The production of a composite hull for the M113 was relatively simple and straightforward. Most of the data needed was already known and the costs were mainly relating to finalisation of an official design based on updated requirements for loads and environmental factors such as protection against nuclear and chemical or biological weapons. All told, this would be US$9.5m (1983), relatively cheap for a military project that enhanced the existing M113’s. The composite hull saved weight, had better thermal properties than the metal-hulled vehicle and maintained the existing level of ballistic protection. In a year of trials by the US Marine Corps, no problems were found with the vehicle’s structure or corrosion and subsequently, it was recommended to proceed with work on the construction of a composite hull for a high-speed amphibious vehicle.

The idea of replacing the aluminium body of the M113 with GRP was proven to be viable and also to produce some benefits. This project was to go on and more GRP hulled vehicles followed. Composite materials offered both improved weight and some other matters without abandoning ballistic protection, but the materials are not without their own complexity. From manufacturing to repair, the costs and problems associated with a GRP bodied vehicle were not solved by this vehicle or even by later trials. The location of either the Owens Corning M113s or the Martin Marietta vehicles is unknown. The lessons learnt during these GRP trials continue to offer designers with a useful way to provide protection for vehicles with a weight reduction over traditional armors. Whether this expensive and complicated technology will ever be fielded in a mass production vehicle is doubtful.

There are no current plans, but it may well appear in the future.
– TE Moderator