When Tank Automotive Command (TACOM) announced in 1977 that they were looking for a multi-role vehicle with a high degree of mobility to perform a wide variety of general purpose duties, several firms were interested. The program from TACOM was for the XM966 Combat Support Vehicle Program (CSVP) and Chrysler was going to play a major role in competing for the contract which would be for thousands if not tens of thousands of vehicles.
Chrysler owned Mobility Technology International (MTI) in California, the same company who designed the Cheetah. However, they sold the design rights to Teledyne Continental in order to focus on their own project called the ‘Saluki’. At the time, Chrysler was having severe financial problems which may explain both why they chose to sell the advanced design from MTI to Teledyne and develop a more standard vehicle themselves. 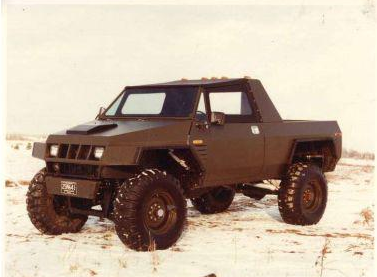 The Chrysler Saluki during testing.

The Saluki was a relatively conventional vehicle as it was based on commercially available, well tested and proven truck components already on the commercial market. It would be built on a modified version of the standard Dodge ladder chassis. The engine would be the 195 bhp 5.9 litre petrol big block V8 coupled to a Chrysler A727 three speed automatic gearbox. Being commercially available the costs of tooling for construction were minimised by avoiding curves – hence the hard angular lines. The only version known to have been built was the ‘pickup’ style which is not surprising considering it was built from existing truck parts. Seating was for 2-3 at most. No armor or weapons were fitted.
The Saluki was tested at Chrysler’s own test ground in early 1981 but due to crippling financial problems, Chrysler sold their entire defence division to General Dynamics in 1982 including the Saluki, at which point it disappears. It’s unclear how many prototypes were actually manufactured or how much military testing was completed. Of the various weapons carrier types desired by the Army none are known to have been tested on the Saluki.
The Saluki was not a bad concept or its time. Commercially available components pre-tested made financial sense which would result in less research and development cost compared to the development and testing of brand new parts. Even so, this ‘discount’ design was still at US$4.1 million dollars for 11 prototypes by Chrysler in 1982, which meant the Army actually paid more for these 11 vehicles with off-the-shelf parts than they did for the Teledyne Continental (US$4m) or AM General (US$4) designs.
It was a better vehicle than the ones found it the US Army’s existing fleet. However it did not meet the criteria set out and tested by the HMMWV program. The engine was petrol rather than diesel and it did not have the required 16 inches of ground clearance. Regardless of what qualities it may have had as a design these two factors would have stopped it from going further. At least two are known to still exist – both in private hands in the USA. 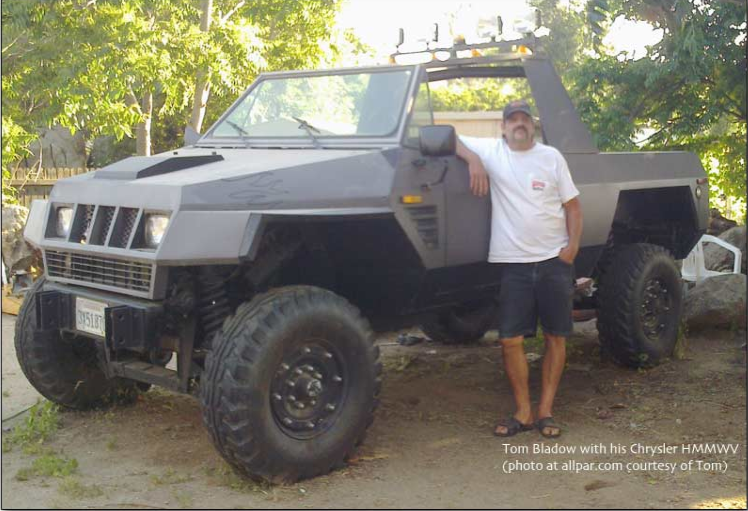 Surviving Saluki in private hands – the lack of ground clearance at the front is obvious. Source: allpar.com