The Armored Personel Carrier M113 was a simple vehicle. It was one of its strengths; simple, cheap, and adaptable. It found a wide variety of uses, but the lack of protection for the occupants was, for an Armored Personnel Carrier (APC), a very significant problem.
The aluminum armor on the box-shaped M113 was sufficient to protect from small arms fire, but was vulnerable to heavy machine-gun fire, and even more so to the High Explosive Anti-Tank (HEAT) rounds deployed by the Viet Cong (VC) and North Vietnamese Army’s (NVA) 57mm and 75mm recoilless weapons, as well as from Rocket Propelled Grenades. The VC had begun using the 57 mm HEAT round as early as summer 1963, with a dramatic rise in their use later that autumn. The rounds would easily penetrate the thin body of the M113, although, depending on where they hit, such as into the empty troop space, they sometimes did relatively little damage. By September 1963, the first 75mm HEAT rounds had been found by American forces in VC hands and in December that year, the first M113 was damaged by a hit from one. To make matters worse, mines were becoming increasingly popular by 1964. The recoilless rifles would, from 1965 onward, be replaced by rocket-propelled grenades, first the RPG-2, and eventually the RPG-7. Something needed to be done as the high level of vulnerability of the M113, the primary armored vehicle in service with US forces and of the Army of the Republic of Vietnam (ARVN) was a significant problem. Not only did the Americans and ARVN know this but so did the Viet Cong who had even published a document training guide in 1965, ‘Attack on M113APC’, detailing the best weapons and tactics to use. 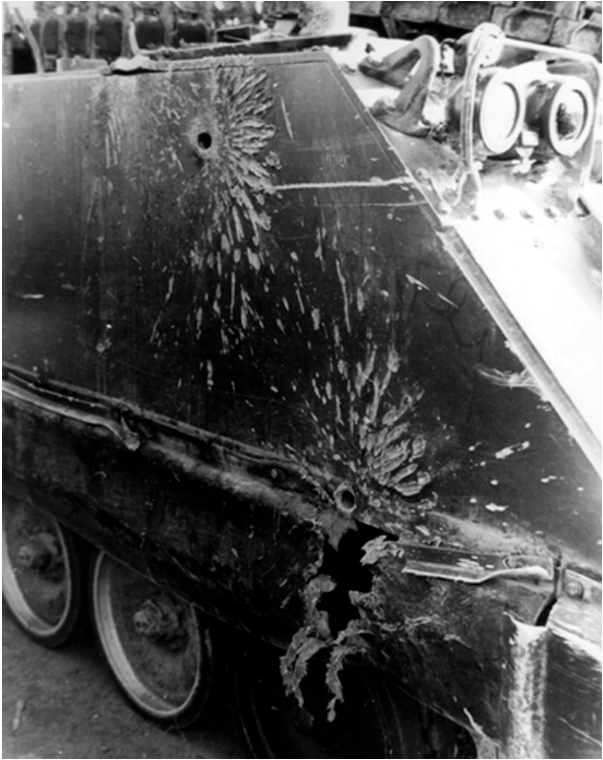 As early as July 1964, it was accepted that the vehicle was vulnerable to the recoilless weapon systems and the US Army Materiel Command (USAMC) began investigating additional armor which could be used to defeat these rounds. Their work was followed by the Ballistic Research Laboratory (BRL). In April 1965, BRL concluded, after exhaustive testing, that the solution lay in the use of bar armor panels attached around the vehicle. By July that year, the first prototype kit of this type of armor for the M113 had been manufactured, and by August 1965, eight further kits had been made and shipped to the Army Concept Team in Vietnam (ACTIV) for evaluation.
These 8 kits were then installed by the 80th Ordnance Rebuild Base Depot (80th ORBD) on M113 vehicles, with seven being used on standard M113 APC’s, and the eighth being fitted to the M113-based M132 Mechanized Flamethrower. Fitting these panels began on 8th October and was complete by 16th December 1965. Each kit required 105 man hours to fit to each vehicle.
The seven bar-armor equipped M113’s were issued to the 10th Armored Cavalry Squadron for the purposes of evaluation during their operations in the heavily jungled areas around Tay Ninh and Long An Provinces and the rice paddies of Hau Nghia Province. The single M132 fitted with the bar-armor kit remained with the 80th ORBD.
Each kit was made of several distinct parts. A large rectangular frame with one corner shaped to match the front profile of the vehicle was attached to each side by means of brackets sticking out of the side, which were fastened to the roof of the M113. Three such frames covered the front with one large, almost square frame covering the centre part of the hull and a tall-thinner frame on each side of the main one. Together, these frames covered the entirety of the sides and front of the vehicle.
As these armor kits increased the weight and thereby reduced the floatation of the vehicle, additional floatation was provided. This came in the form of a row of 5 large welded boxes attached to each side between the vehicle hull and the bar armor, and two large rectangular boxes welded along each front edge of the hull. As these boxes were hollow, they would provide the additional buoyancy required to counteract the weight of the armor kit. Tests later showed that, despite being slightly nose heavy, the kit did not hinder the M113 in the water.

The kits also had the undesired effect of increasing the bulk of the vehicle. The front frame projected 14 inches (356 mm) from the nose, requiring the driver to slow down prior to navigating a ditch. When he did not do so, the armor would strike the other side of the ditch and damage the bumper bar behind, which caused some of the grille bars to break and fall off. It was the same story for the width. Without the base armor kit, the base M113 was 105.75 inches (2.686 m) wide and could be reduced to just 100 inches (2.54 m) when the track guards were removed. When the bar armor kit was installed, even in the folded-in position, it was 112 inches (2.84 m) wide, which meant it proved to be too wide to cross standard Army bailey bridges in the Vietnam theatre. When the side frames were extended out to the desired position, 14 inches (356 mm) from the sides, the vehicle became 128 inches (3.25 m) wide which caused serious problems when traversing either the high grassy areas which could conceal obstacles or areas with trees. 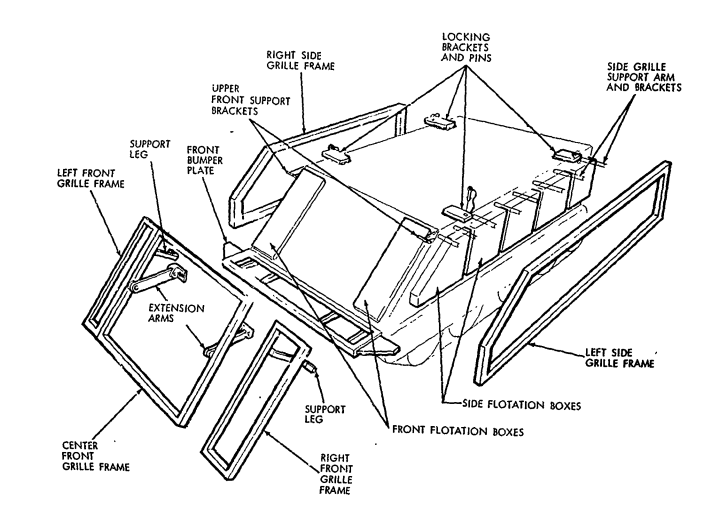 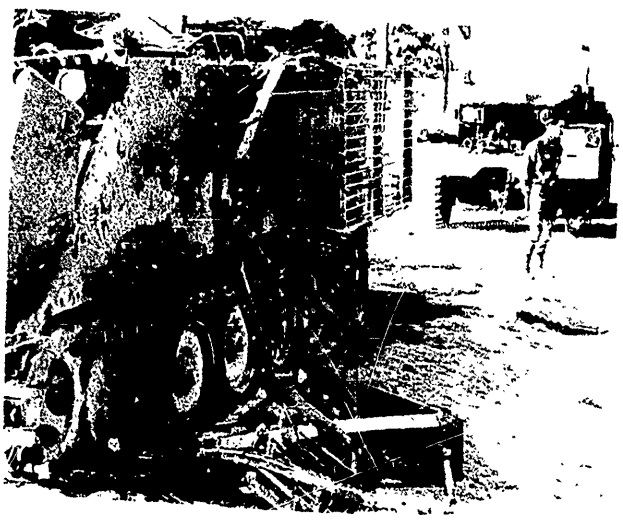 An M113 equipped with the Bar-Armor. Illustrated by Andrei ‘Octo10’ Kirushkin, funded by our Patreon Campaign.

The first trials of the 8 kits had been inconclusive, but two more kits were sent from the US to Vietnam, which, along with firing observation ports, were fitted to the vehicles assigned to the 2nd Armoured Cavalry Squadron in the Vietnam Delta. This unit was unable to use the bridges in their area with these kits, so instead, the vehicles were diverted to the 1st Cavalry Squadron (II Corps) north of Saigon. 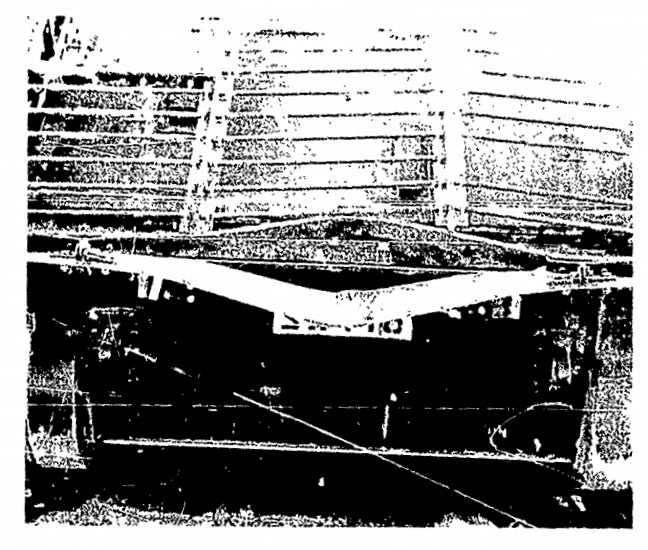 Damage to the front of one M113 caused by striking terrain. Source: ACTIV

Damage to the top and bottom rotating arm mounts for the side frame caused when the frame struck terrain. Source: ACTIV 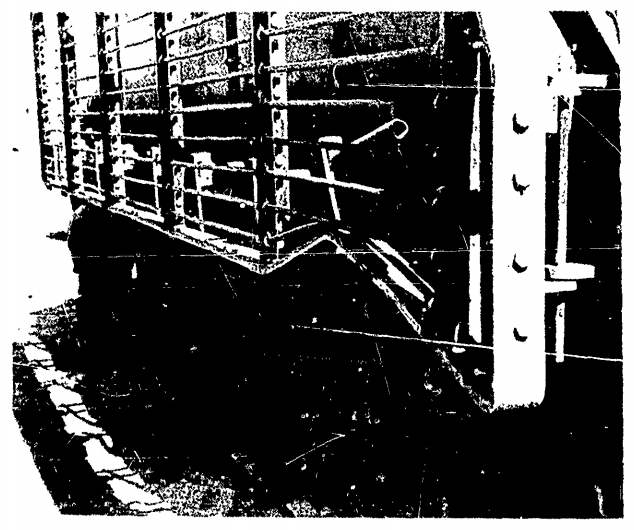 Damage to the side frames of the bar armor caused by striking terrain. Source: ACTIV

Although during the trial period the bar-armor was not fired upon by VC/NVA forces with recoilless weapons, the limited combat action which had been carried out had shown the vulnerability of the floatation boxes attached behind the bar armor. One vehicle using the kits was damaged by an anti-tank mine but was repaired fairly quickly. The damage from negotiating the terrain though was a problem and every one of the 7 vehicles initially tested suffered damage that way. It was the lack of enemy action against the armor and the excessive damage caused by negotiating the terrain which killed the project. Over the 3 month trial, no determination could be made by ACTIV as to the success or otherwise of the kits and the additional width and projection at the front of the vehicle limited the mobility of the vehicles. The bar armor was therefore abandoned in that form, it would have to be more durable to survive the Vietnamese terrain and no recommendation for this type of armor was issued for the US or ARVN forces.
It is hard to say how much the bar-armor could have reduced losses to the M113 in Vietnam had it been adopted or at least modified and adopted. Instead, the M113 received numerous minor modifications and the machine-gun cupola mount to improve its firepower instead. Whilst some crew did try using mesh netting as a field modification, no further official trials of these bar kits were undertaken. Between November 1967 and March 1970, the US and ARVN forces lost no less than 1,342 M113’s to enemy land-mines alone. Some 73% of vehicle losses in Vietnam were due not to recoilless rifles or RPG’s, but to landmines, and subsequent investigations into vehicle survival focussed on reducing the vulnerability of the M113 to mines, and its tendency to immolate the occupants when hit.