The desire for a large and valuable contract for thousands of vehicles spurred many companies to try for the XM966 Combat Support Vehicle Program in 1977. TACOM (Tank Automotive Command) had issued the requirement for a vehicle capable of good off-road performance and yet still fulfill the needs of the military for general duties from hauling supplies to scouting. Of the many firms applying this contract, one was AM General.
AM General had already been the destination contractor back in 1974 for FMC (Food Machinery and Chemical Corporation) for their XR311 prototype light scout vehicle. That vehicle was more of a ‘dune-buggy’ than a practical military vehicle and if FMC had received orders from the military it was to have been AM General who built the vehicles. As it happened, no orders were forthcoming and FMC withdrew from wheeled vehicle work, selling all of the rights for the XR-311 to AM General. Thus, when TACOM announced the XM966 CVSP, AM General was in the fortunate position of not just having a design but one which the Army had already looked at between 1971 and 1975 and had liked. It is no surprise therefore that the vehicle design submitted to the military by AM General was very similar to the XR-311. 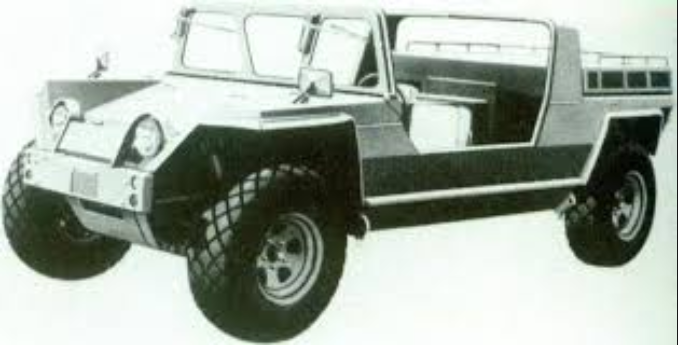 AM General Prototype. Source: unknown
The XR-311 had been a capable off-road but with some deficiencies in several areas. Firstly, it was too small, seating just 3 men at most. AM General, therefore, increased the seating to 4-5 seats by moving the seating area forwards and backward a little to make space, resulting in a vehicle looking like the XR-311 but a little ‘stubbier’. The split screen windscreen of the XR-311 was replaced with a futuristic looking 3 piece windscreen. The wheelbase was extended by 254mm and widened by 5.5cm and the height lowered by 11 cm compared to the original XR-311.
The engine was a Deutz F8L 610 V8 air-cooled (no radiator) diesel engine as the 1977 CVSP requirement had changed in 1979 to the HMMWV which required a diesel engine rather than the petrol engine of the original design. This engine was unusual in that it was air cooled but this reduced the overall weight and the number of parts which could break, thus it was simpler to maintain. It delivered 160 bhp @ 3200 rpm. This engine was coupled to the same Chrysler A727 3 speed automatic transmission as with the other designs.
Just like the XR-311 years before, examples were fitted out for a variety of roles and evaluated at Fort Knox in Kentucky with the carrier variant protected by kevlar panels. Weapons options offered included a .50 cal. heavy machine gun, 106mm recoilless rifle and TOW missile launcher with an optional kevlar armor kit.

Illustration of the AM General XM966 HMMWV Prototype produced by Andrei ‘Octo10’ Kirushkin, funded by our Patreon Campaign.

End of the line

In 1981, TACOM finalized the specifications for the HMMWV but nothing more is known of the revamped XR-311 after the 1979 requirement as attention switched to the newly designed HMMWV vehicle and the XR-311 was finally consigned to history. It is this vehicle, essentially a fourth generation of the XR-311 which was submitted by AM General that got them started and why many people see the XR-311 as the grandfather of the HMMWV although, in reality, the vehicles were quite different. The XR-311 was over in 1979, AM General was to concentrate on their own vehicle instead.

The AM General revamped XR-311 with a new, longer crew compartment. The windscreen is also now vertical but the XR-311 lineage is still very clear. Source: Bill Munroe