The RO2000 series of light vehicles came about as a government evaluation into developing a new generation of vehicles known as Future Family of Light Armoured Vehicles (FFLAV). FFLAV began to progress swiftly after the 1990-1991 Gulf War, which had highlighted key areas of concern in the older vehicles used by the Army, notably the FV430 and CVRT series which were already three decades old. FFLAV was to streamline at least three key series of vehicles into one family; the FV430 series, the FV510 Warrior family, and the CVRT (Combat Vehicle Reconnaissance Tracked). This would have left an opening for up to 7000 replacement vehicles, leading to one of the largest modern defense contracts ever issued. The RO2001 Self Propelled Howitzer

The Royal Ordnance RO2001 self-propelled howitzer was designed for the export market and was based on the UK’s RO2000 universal chassis. Had it been accepted for UK service, it was proposed to mount a L13A1 105 mm gun similar to that of the FV433 Abbot Self Propelled Gun or, alternatively, the Royal Ordnance L118 light 105 mm gun.
The export version for Egypt was meant to be armed with a 122 mm D30 howitzer which was manufactured in Egypt by Abu Zaabal Engineering Industries Company. It was based on the Russian designed howitzer. It had a computerized gunsight system for both direct and indirect fire modes.
Although the prototype was fitted with the 122 mm D30 howitzer, the vehicle hull and superstructure could be adapted to fit most 122 mm howitzers. The superstructure and gun mount enabled the gun to have a traverse of + 30 deg from the centreline: +70 deg elevation and -5 deg gun depression. There was enough storage space for 84 rounds for the main gun.
The hull was to be rolled steel with the driver to the front left and the other 4 crew including commander and loaders in the rear. Unlike the Abbot, the RO2001 did not have a fully rotating ‘turret’, with the rear superstructure being built up and designed to fit a variety of weapons or possible refits including the D30 122mm gun. Secondary protection was by means of a 7.62 mm machine gun as well as L8 grenade dischargers with VIRSS (Visual and Infrared Screening Smoke).
It was powered by a Perkins TV8- 640 8-cylinder turbocharged diesel engine but had a maximum horsepower of 320 hp. It had a maximum road speed of 55 km/h. Fuel tank capacity 454 liters. The transmission was an engine – gearbox coupling with a Twyflex centrifugal clutch. The T320 gearbox had self-changing gears. It was an automatic 6-speed epicyclic unit with manual hold controls. It had regenerative, disc brake steering. The main breaks were Lockheed disc brakes that were hydraulically operated. The suspension consisted of traverse torsion bars: 5 stations per side with telescopic dampers on the front and rear wheel stations. The track was cast steel link drive pin type with rubber bush inserts and rubber road pads.
The vehicle electrical system was a screen suppressed and waterproofed 24V electrical system. There were two 6TN batteries giving 100 amp-hour capacity for engine starting. An additional two 6TN batteries gave 100 amp-hour capacity for auxiliary systems.
The prototype RO2001 lightweight artillery self-propelled gun (SP122) fired over 300 rounds during trials in Egypt and covered 10,000 km. It was shipped to Britain so that it could be put on show at the British Army equipment exhibition arms fair in the summer of 1986. It stood on the Royal Ordnance stand next to the 120 mm mortar (RO 2003). 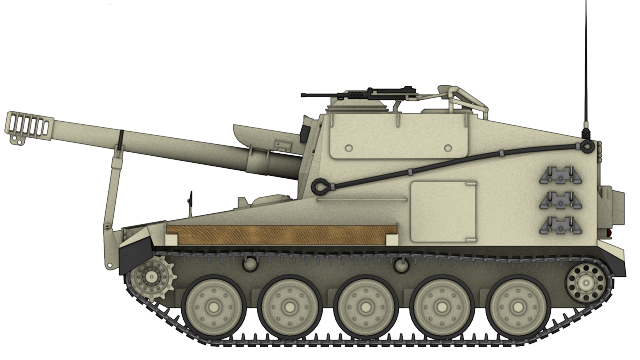 The RO2001 Self-Propelled Gun (SPG). This illustration was produced by Brian Gaydos, funded by our Patreon Campaign

Only one vehicle was built and was sent to Egypt, where it was fitted with a D30 howitzer made by Abu Zaabal Engineering Industries with sighting systems for both direct and indirect fire. However, no advanced fire control was attached to this version. The competition was from a US platform but neither was accepted for service. Unfortunately, like so many good ideas put forward, political bickering and incompetence saw interest wain and the UK once again began the ongoing waste of money that became synonymous with its research and development process.