Canada is a vast nation with enormous forested areas, so it is of no surprise that a variety of designs have cropped up over the years to fight forest fires. For a vehicle firefighting in remote and rugged areas, good levels of mobility are required and so it is also no surprise that tracked vehicles are particularly well suited for the sort of job in question.
Likewise, the use of jet-exhaust for firefighting activities is not a completely new concept, nor is the repurposing of old tanks for civilian usage.
The real question is, has anyone ever combined a surplus tank with jet engines for fighting fires? Surprisingly to many, the answer is yes. There was a T-34 tank hull with jet engines used in the aftermath of the 1991 Gulf War, where the force of the jet exhaust could blow out the oil wells left burning by retreating Iraqi forces. Less known is a daring idea from 1998 in Canada using a similar principle.

First and foremost, the use of the name ‘Firefly’ has to be addressed. Despite it including the word ‘fire’, neither the Sherman nor Churchill tanks used in this Canadian modification were ‘Firefly’s’ in the tank sense of the word, that is, fitted with the 17 pounder gun, which clarifies some of the confusion over which version of tanks are being described. 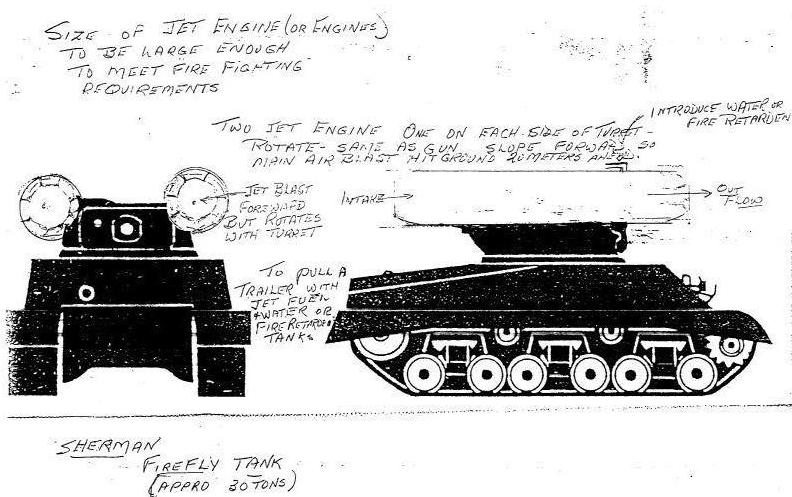 The hull selected for this version appears to be that of an M4A3(76)W HVSS Sherman and is described (but not shown) as using the trailer for water and fire retardant. Source: Patent CA2242736.

The design for the Firefly tank was submitted by Robert Matheson of Edmonton, Canada on July 1988 and covers the use of a ‘Turbine Jet Engine-Army Tank Forest Fire-Fighter’ described as:

“an apparatus which will enable the user to fight forest, brush or grass fires by injecting water or another fire retardant into the high pressure large volume of air being exhausted from a turbine jet engine mounted on the turret of an obsolete army tank which provides the required with, mobility and ability to direct airflow from the jet engine by use of the rotatable turret”

The description is therefore simple and explanatory but requires some elaboration. The tanks to be used are not necessarily Shermans or Churchills, as shown in the patent, but are an indication that any surplus or obsolete tank would be fit for the purpose.
It should also be noted that, although Canada did use Churchill tanks, and Firefly’s and Crocodiles and Shermans at various times, they did not operate the M4A3E8 shown in the drawing domestically, they only operated M4A2E8’s.
The tank itself should be selected because it has the mobility to go off-road for firefighting and because the mass of the vehicle means that the back pressure from the use of the jet turbine would not cause it to lift off the ground. Mounting the turbines onto the turret also adds the ability to turn and direct the blast of air/water in any direction. The only modification other than the addition of the two jet turbines to the turret was the removal of the gun from whichever tank was selected. No additional heat insulation for the vehicle or cooling system was envisaged, relying instead on the vehicle to provide inherently some “substantial protection from the heat of the fire to allow the operator to attack the fire where such action would be most effective”.

Artists impression of the Churchill-based ‘Firefly’, based on existing drawings.

Artists impression of the M4A3E8-based ‘Firefly’, based on existing drawings.

Both of these Illustrations were produced by Alexe Pavel, based on work by David Bocquelet.

The use of aircraft to fight forest fires is a very expensive endeavor and depends on the weather conditions at the time. Fire trucks struggle to go off-road and further struggle to deliver a sufficient volume of water to stop a fire. With a particular emphasis on the protection of buildings at the margins of the forested areas, these Firefly vehicles would be able to deliver a large quantity of water and fire retardant like AFFF at high pressure injected into the exhaust of the engine blasted at the fire.
The example vehicles on the patent were both drawn or described equipped with a trailer carrying water and fire retardant. However, the quantity of liquid in such a trailer would be just a fraction of what would be needed to make a difference to a forest fire. There was only brief consideration of a direct hook-up to available mains supplies of water or pumps feeding water from a stream or lake described as “a means could be readily provided to have the ability to supply a constant supply of water”. In this regard, the design is a failure, as even if it gets to the fire in the right place, it would not be able to sustain operations long enough to make much of a difference. The reuse of the existing Churchill (A.22F) Crocodile fuel trailers would indicate a volume of water of about 400 Gallons (UK), (1,818 liters) but the drawing also clearly shows the Firefly trailer is at least twice as small as the Crocodile one relative to the tank. Perhaps as much as 1000 Gallons (UK) (4,546 liters) could be carried, although this would not last very long pumped into the exhaust to fight the fire.
Fires are hot. This may seem obvious, but tanks are made of metal and riding in a hot metal box would be an exhausting experience. With the operators of the tank most likely having to be inside the vehicle with the hatches shut, the temperatures may well have become intolerable, and there is no discussion of additional cooling or air-handling systems provided to ensure that the operators did not succumb to the heat and stifling conditions inside.

Churchill Mk. VII (A.22F) version with modified Crocodile trailer. Source: Patent CA2242736
Attaching the turbines to the turret causes additional problems. The weight of these jet turbines would likely overstress the ability of the turret motors to rotate the turret properly, and even if they did not, the pipework connections would prevent a full range of motion. The force from the turbines would also cause a lot of stress on the turret ring as well.

The idea of attaching jet-turbines to tanks is definitely possible and had been done before, as had the idea of using them for fire-fighting purposes. This plan was no doubt well-intentioned and did combine the elements needed for firefighting, but overlooked some key design and operational hurdles, not least of which being that regardless of the technical merits of the design, who was going to pay for the operational costs and maintenance of these obsolete tanks. Presumably, lots of these modifications would be needed in every province due to the slowness of moving them from A to B and the vast landmass of Canada. Hazards to the crew from smoke and heat were inadequately addressed and there was insufficient consideration given to providing a sufficient supply of water for sustained operations. Other matters, like whether it was advisable to blast a fire with air at high velocity possibly adding to the spread of burning embers was not discussed at all. The final note should, of course, be the tanks. Yes, it is true the design is shown using a Sherman and a Churchill tank and, whilst these might be amusingly anachronistic, they are only indicative of how such equipment would look on a surplus tank. Whilst the design has no military value and a questionable value for civilian purposes, these designs are probably more interesting to model makers today.

the modern version, for the aftermath of the Gulf War, was the “Orkan” (Hurricane). This was a Mig-21 jet engine mounted on a T-54 chassis (both ex-East German NVA). The vehicle is exhibited at the Deutsche Feuerwehrmuseum in Fulda. I have a coupleof photographs, if anyone is interested.

more than likely, although the Orkan had only a single jet engine mounted on it.

The use of tanks to fight fires is something, that should be investigated further. There is f.e. the German Leopard-1-based Fire Commander with a twin IFEX-watergun.

Actually I think you meant M4A2E8 because the U.S hardly ever exports it’s “Easy Eight” because of its better armor? so that’s kind of incorrect and correct so… but still they do export some “Easy Eight” so it’s depended on which country.