El Salvador is a small and relatively poor nation. Despite a successful agricultural sector producing coffee, the wealth from this crop remained with the elites in the government and, as a result, the peasantry of the nation grew increasingly frustrated at the lack of the wealth shared with them for their labors. This resentment had been festering for decades with continual problems and internal strife and, in 1979, the army led a coup against the government with the goal of sharing this wealth with the farmers and people actually producing the wealth. Like so many revolutionary goals though, the trappings of power soon corrupted this idea and the military, aligning themselves with the Christian Democratic Party, installed itself as a governing junta and started a brutal crackdown on dissent from intellectuals, the clergy, and the media.
The nation was still under international arms embargo following its invasion of neighboring Honduras in 1969 (The Hundred-Hours War – sometimes mistakenly referred to as ‘The Football War’) so found itself at a time of significant internal struggle with few armored vehicles.
The guerillas fighting against the government were known under the umbrella name of Farabundo Marti National Liberation Front (FMLN), named after a famous campaigner for worker’s rights – Augustin Farabundo Marti – who had been put to death decades earlier by a previous repressive government. Under the FMLN, a left-wing revolution was taking place and the government struggled to control it, calling upon the United States for aid. In the context of the time, the USA was concerned about possible Soviet-Communist influence growing in the region. As such, the USA mostly managed to turn a blind eye to the appalling massacres, rapes, torture and other gross human rights abuses the government was committing and provided both financial aid and military aid in the form of technical and military advisors. Short of armored vehicles for protecting infrastructure and convoys and for patrol use, a variety of tracked and wheeled armored vehicles were cobbled together by Maestranza de la Fuerza Armada de El Salvador (FAES) under the expert eye of Captain (later Major) Oswaldo Marenco. After decades of internal strife, this unit was well experienced in the operation and repair of light armored vehicles.
With more of the war taking place in the countryside or by means of ambush, fast, wheeled armor was needed, and in the early 1980s, the now Major Oswaldo Marenco designed a purpose-built internal security vehicle for this role, the Cashuat (meaning ‘horse’ in the Pipil Indian language used in parts of El Salvador and Honduras). 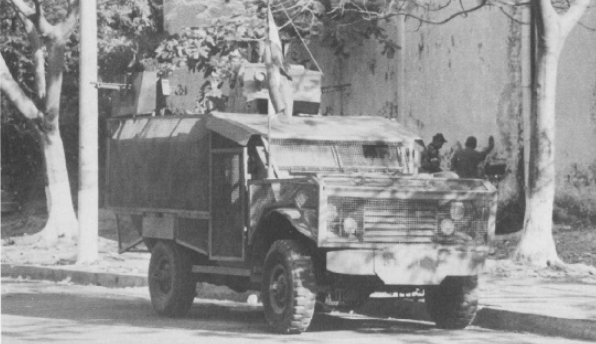 The design of the ‘Light Assault Vehicle Cashuat’ is a relatively simple one. Aided by US engineers based in Detroit, Major Marenco took the chassis of the 4-ton Dodge Power Wagon and turned it into an armored car. Using the design of an existing vehicle was a cheap (less than ⅓ of the cost of a Cadillac Gage 150) and effective way of delivering a vehicle for the El Salvadoran Army and getting around the arms restrictions. Sixty-six vehicles were built in two versions: APC and Fire Support, although the basic design was the same. The first vehicles started to be delivered to the armed forces in August 1985.

The APC version of the Cahsuat was open-topped, built from large flat panels of steel armor plate welded together forming a large open space in the back for troops. A single, large bench seat was provided in the center of this troop compartment with all the seating facing outwards, where the soldiers could use the three shuttered vision ports on each side, or the two at the back to see out. Inside these protective steel walls were kevlar sheets arranged around the lower sections in order to protect from spalling caused by rounds hitting the outside of the metal. 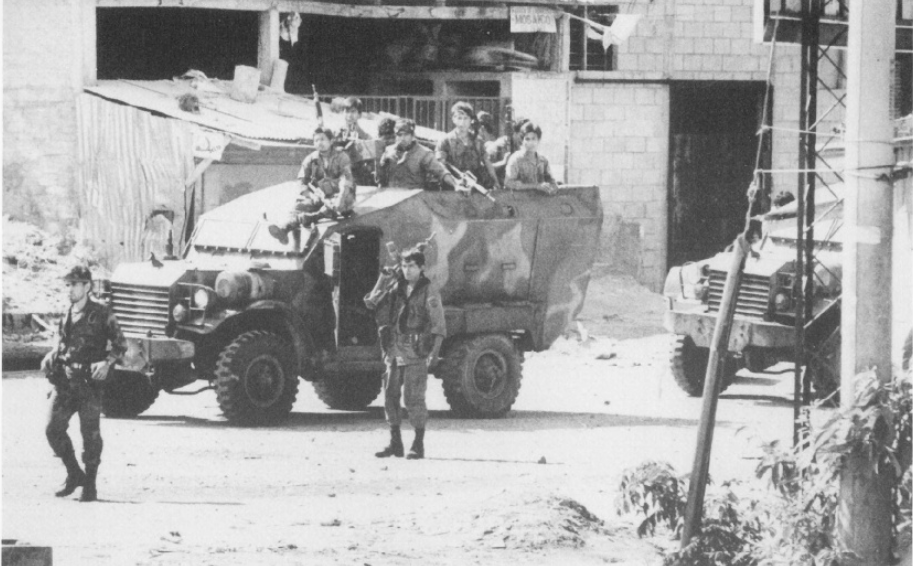 APC Cashuat during operations in an unidentified urban neighborhood. Source: Spencer
The cab at the front was completely enclosed and had two large rectangular bulletproof glass windscreens and another bulletproof glass window in the large door on each side. A single, pintle-mounted M60 machine gun with a gun shield was mounted centrally over the top of the cab to be operated by a member of the crew in the back. 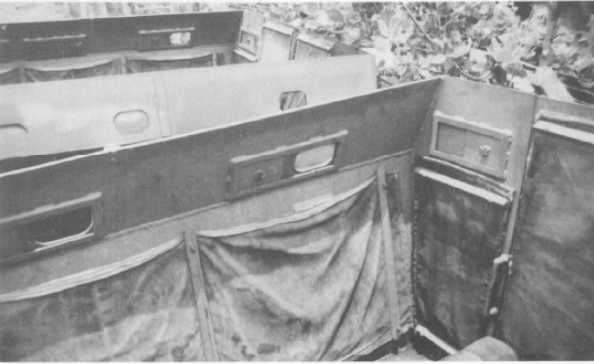 Interior of the APC version of the Cashuat showing the position of the kevlar spall-sheets. Source: Spencer

The Fire Support Cashuat was the same basic vehicle as the APC version but without the large bench in the back. Instead, the Fire Support version carried two M60 machine guns mounted on swinging arms inside the rear. Each gun was protected by a gun shield and a rotating seat was fitted for the operator and each covered a side of the vehicle and well as being able to fire forwards. A third gun, a .50 caliber heavy machine gun, was fitted centrally in the rear-facing forward over the cab and also behind a gun shield. This gun position operator also had a small ‘turret’ in which to operate from, made from welded steel panels and fitted all round with bulletproof glass vision blocks. Some of the front gun shields can be seen in photographs to have a spot lamp added too, which would greatly assist in fire control during operations in poor light conditions. 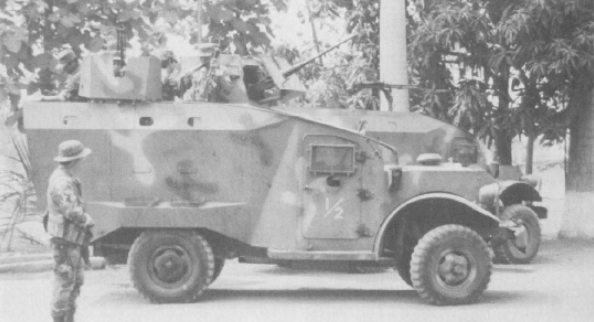 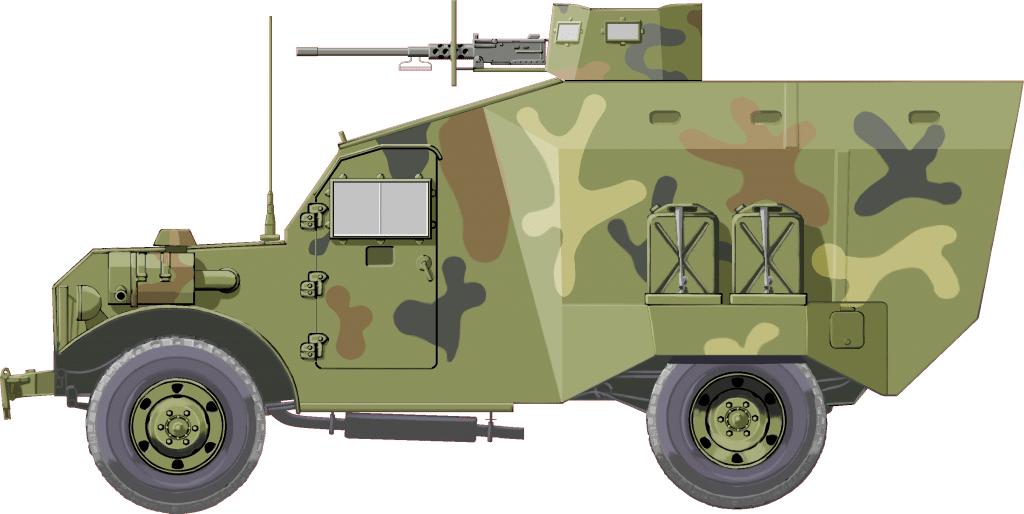 A fire-support version of the Cashuat, as used during Operation Caminante in 1987. Illustrated by Jaroslaw ‘Jarja’ Janas, funded by our Patreon campaign.

The Cashuats provided valuable armed protection for the remainder of the civil war, escorting convoys and delivering much-needed fire support during engagements with the guerillas. In 1987, the guerillas had promised to use their power to create transportation chaos, vowing to stop people moving around the country and grinding it to a halt. The army responded with Operation Caminante, and for this, the Cashuats showed their true value in breaking this phase of the guerilla campaign because the rebels were unable to stop the Cashuats on the road. 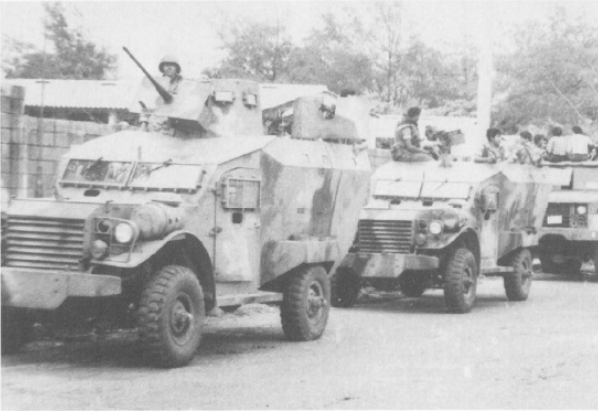 Fire Support Cashuats seen during Operation Caminante 1987. Source: Spencer
Following Operation Caminante, Cashuats remained in use and were active in the fighting during operations in 1989 and re-exerting control over guerrilla supporting neighborhoods, but by this time, the guerillas were making increased use of rocket-propelled grenades (RPGs) and several Cashuats were hit and had been damaged, although not unrepairably so. No Cashuats appear to have fallen into guerrilla hands.

As a result of the growing danger posed by RPG’s evidenced in the 1989 campaign, some of the Cashuats (both APC and Fire Support versions) were retrofitted with mesh screens which covered the sides, back and front of the vehicle. The intention was to provide protection against RPGs, but how effective they actually were is hard to quantify. The large flat plate directly over the cab and under the front machine gun position had also proven to be problematic and, as part of the upgrade program, a large steel panel was fitted over this area with the edges going down towards the doors. This spaced armor thus provided the additional protection against small arms fire the original angled plate did not. 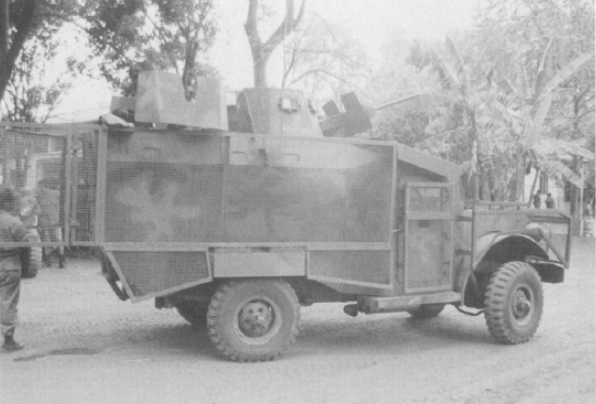 Upgraded Fire support Cashuat with the stand-off mesh screens to protect against RPG’s and improved armor over the cab. Image date March 1990. Source: Spencer
At least one upgraded APC Cashuat was lost though, destroyed by a satchel charge thrown from a motorbike, probably into the open top of the vehicle in November 1990, a blast which wrecked the truck and killed 6 men. 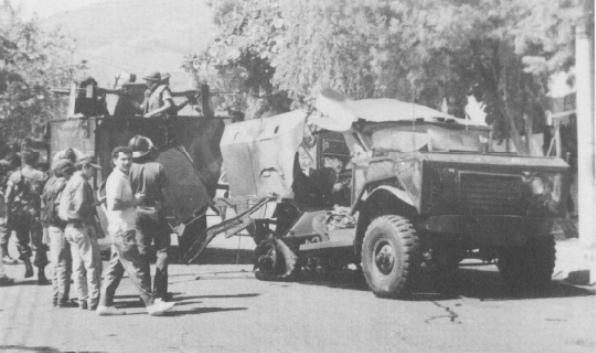 The aftermath of the November 1990 satchel charge attack on an upgraded APC Cashuat. Source: Spencer

Following the end of the civil war in 1992, many Cashuats remained in service and were subsequently modified and upgraded. These changes include the addition of another set of tires at the back for better load handling and an antenna on the front right of the cab where it meets the bonnet. Other vehicles, including at least one APC version, had a 20 mm Hispano Suiza HS404 cannon (originally from an Ouragan jet fighter) fitted. Other weapons mounted include one with a dual .50 caliber HMG and another with an M79 40 mm automatic grenade launcher. 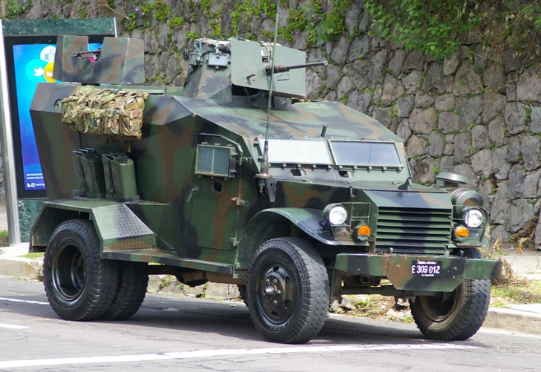 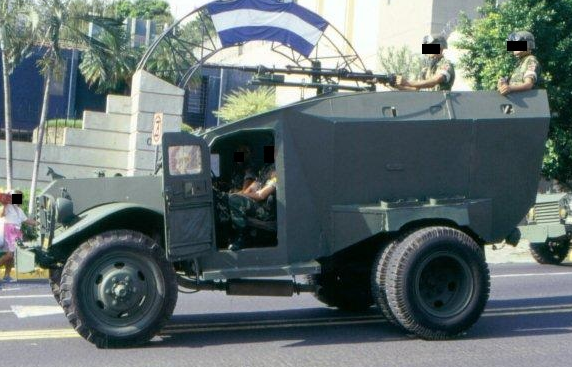 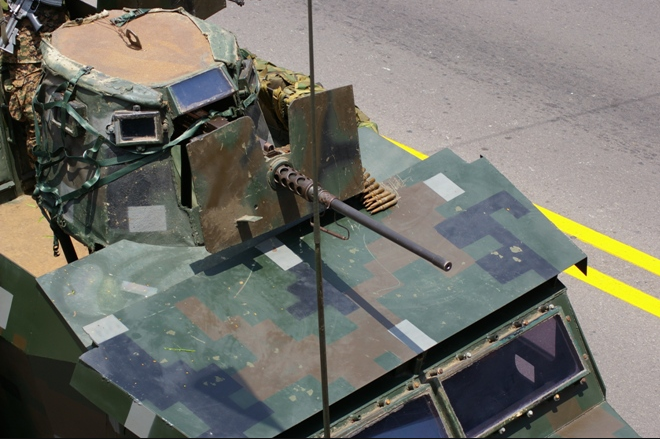 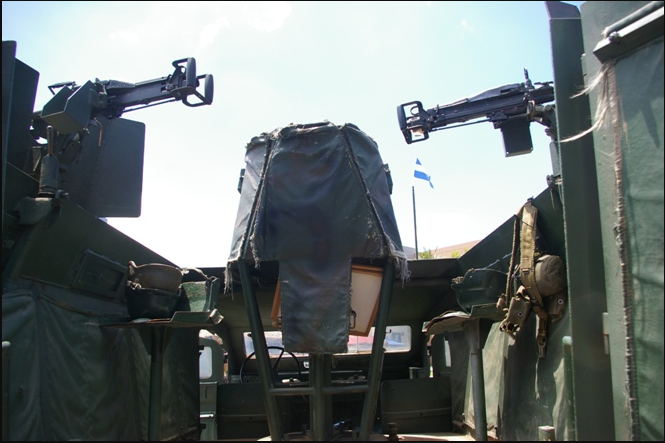 Two views of the turret on the Cashuat including a good view of the additional roof armor which has not been retained on all vehicles. The Kevlar spall panels can still be seen in the lower half of the fighting space in the back. Source: Montes

The Cashuats remain in service with the army of El Salvador, this not being a surprise given that they are rugged, simple and reliable vehicles. Of the sixty-six originally made, several were damaged or lost during the civil war and it is not know how many remain serviceable but they are likely to remain in use for some time. 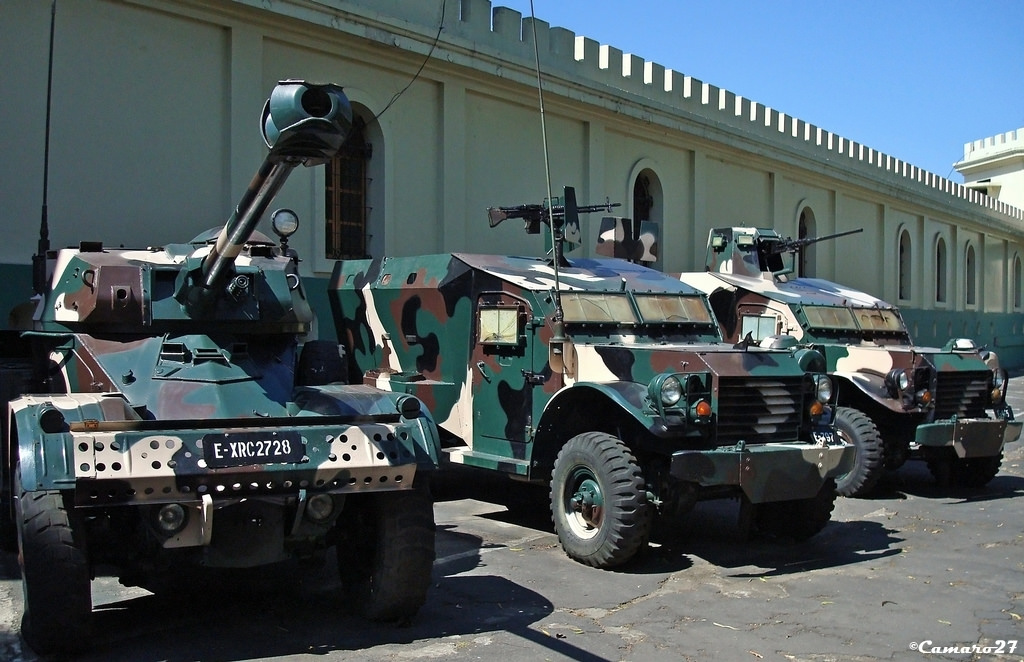 “ Other weapons mounted include one with a dual .50 caliber HMG and another with an M79 40 mm automatic grenade launcher.”

The M79 is a single sot, break action weapon, not an automatic weapon.
https://en.wikipedia.org/wiki/M79_grenade_launcher

Maybe it is a Mk 19? https://en.wikipedia.org/wiki/Mk_19_grenade_launcher